Created By Invento Robotics, Mitra Was Launched By PM Narendra Modi At GES 2017

“Finland is like an iPhone – small and highly developed. India is like a vintage automobile that is now getting restored. Connect your iPhone music to the speakers of this great old car and you experience a fusion of two great things.”

The maker of Indian robot Mitra and CEO of Bengaluru-based Invento Robotics, Balaji Viswanathan stated these words when he recently joined GOInternational Finland, a Nordic international accelerator, to showcase the Indian robot at annual technology conference Slush 17 in Helsinki, Finland.

During the Slush event, Mitra – the Indian robot not only gained the attention of the audience, but it also received opportunities for partnership with a European firm. It was also taken into consideration for the upcoming Tokyo Olympics by Japan’s Olympics committee, as revealed by Balaji in a Quora post.

Mitra: From Inception To Dazzling The Global Tech World At Slush’17

The five feet tall humanoid robot was launched by PM Narendra Modi and Ivanka Trump, advisor to the President of the United States in November 2017 at the Global Entrepreneurship Summit (GES) 2017 conference held at Hyderabad.

As Viswanathan stated in a recent interview at GoInternational Finland, “My wife and I staked everything we owned to start this company. We did it without taking any venture money and created a sustainable venture. We are home to now 20 smart people from three major religions and seven languages”.

He further delved into the technical intricacies of the Indian robot Mitra. Mitra is programmed to greet customers and interact using facial and speech recognition, contextual help and autonomous navigation. The robot is fully manufactured and assembled in Bengaluru. Its body is made of fibreglass and is equipped with a touchscreen. On a single charge, Mitra can last up to 8-10 hours.

In a short time, the robot has gained quite a positive response from the industry as claimed by Invento Robotics, the team behind its origin. “Mitra can do just about anything including tweet for you! It can be a party photographer, an intelligent DJ, and an entertainer too,” stated a TOI report after its launch in GES 2017.  Even, Amul has made its signature billboard with the robot Mitra at GES 2017, which was quite a spectacle to watch. 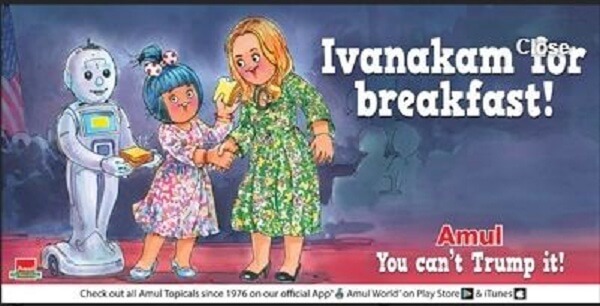 Reportedly, it is also serving humans in a few Canara Bank branches as well as PVR Cinema outlets in Bengaluru. Also, the company rents out the robot for interactive sessions at offices, hotels and even private birthday parties.

The Road Ahead For Robot ‘Mitra’

Mitra is currently in the development phase and the team is continuously working to make it increasingly interactive and also glitch-free, for use in the near future. In terms of its utility, Invento Robotics see the utilisation of Mitra in a number of industries ranging from hotels, malls, restaurants, airports, hospitals, etc.

As Viswanathan said, “Humanoid robots will serve the need for a multilingual world needing personal or contextual assistance. The robots will work with their human masters to provide a superior customer service. We are about 2-3 years away from seeing this ubiquitous in the places we go.”

Going ahead, as the technology will mature, the company aims to work with Nordic partners in retail and hospitality and do pilots to gauge user interest in their product. “We are also looking at software consulting companies to help build custom applications around the robot,” he added.

“Creativity in India can make poetry as well as technology for the world.” For a large and diverse country like India, these words of Microsoft CEO Satya Nadella cannot be termed as an ‘exaggeration’.

Humanoid robots, in concept, are not new. A similar robot, ‘Pepper’ was developed in 2014 by French robotics company Aldebaran Robotics, which was taken over by SoftBank. Today, around 140 SoftBank Mobile stores in Japan use ‘Pepper’ to interact with their customers. It also became the first humanoid robot to be used in homes. In October 2017, the news of Saudi Arabia providing citizenship to ‘Sophia – the humanoid Robot’ also made the entire world go sceptical and at the same time, excited. However, Mitra f has once again made India stand at the frontiers of the global technological advancements.

From drones to Hyperloop and from virtual reality to AI, Indian startups, as well as the government, are working at a rapid pace to integrate new age technologies dominating the western world. The Indian technology think tank TIFAC, is currently engaged in fulfilling the Technology Vision 2035, which includes making India as technologically advanced and culturally rooted as possible. Both are challenging tasks indeed.

But as Ray Kurzweil, owner of IT firm Kurzweil Technologies said, “Artificial intelligence will reach human levels by around 2029.” And as the robot Mitra gets unveiled before the world, India has made its intentions to lead the race of human and technological advancement known to the world.

You can read the complete interview here.