From Nykaa To Paytm: Founders Lose Over $1.7 Bn In One Week As Indian Tech Stocks Crash

From Nykaa To Paytm: Founders Lose Over $1.7 Bn In One Week As Indian Tech Stocks Crash

Under a huge sell-off pressure from institutional investors, tech stocks have been tumbling for the past 10 days.

Collectively, the founders and promoters of companies that went public in 2021 saw losses of over $1.7 Bn in their holdings

India’s listed tech companies are feeling the heat from the stock market, after a major decline in stock prices globally has led to massive drop in valuation of Indian tech companies and a resultant losses in the worth of founder and promoter stakes in these companies

Under a huge sell-off pressure from institutional investors, tech stocks have been tumbling for the past 10 days. Zomato, Nykaa and Policybazaar have all lost steam since their encouraging listings, while Paytm has continued to go from bad to worse. As a result, founders and promoters have seen the worth of their holding erode.

Collectively, the founders and promoters of companies that went public in 2021 saw losses of over $1.74 Bn in their holdings due to the market crash.

Naturally, founders and CEOs will see gains in their holdings if and when the stock prices go up, but for now, the situation is bleak. Macro factors such as rising interest rates that have led to nervousness and heavy profit-booking, and this is not about to subside soon. 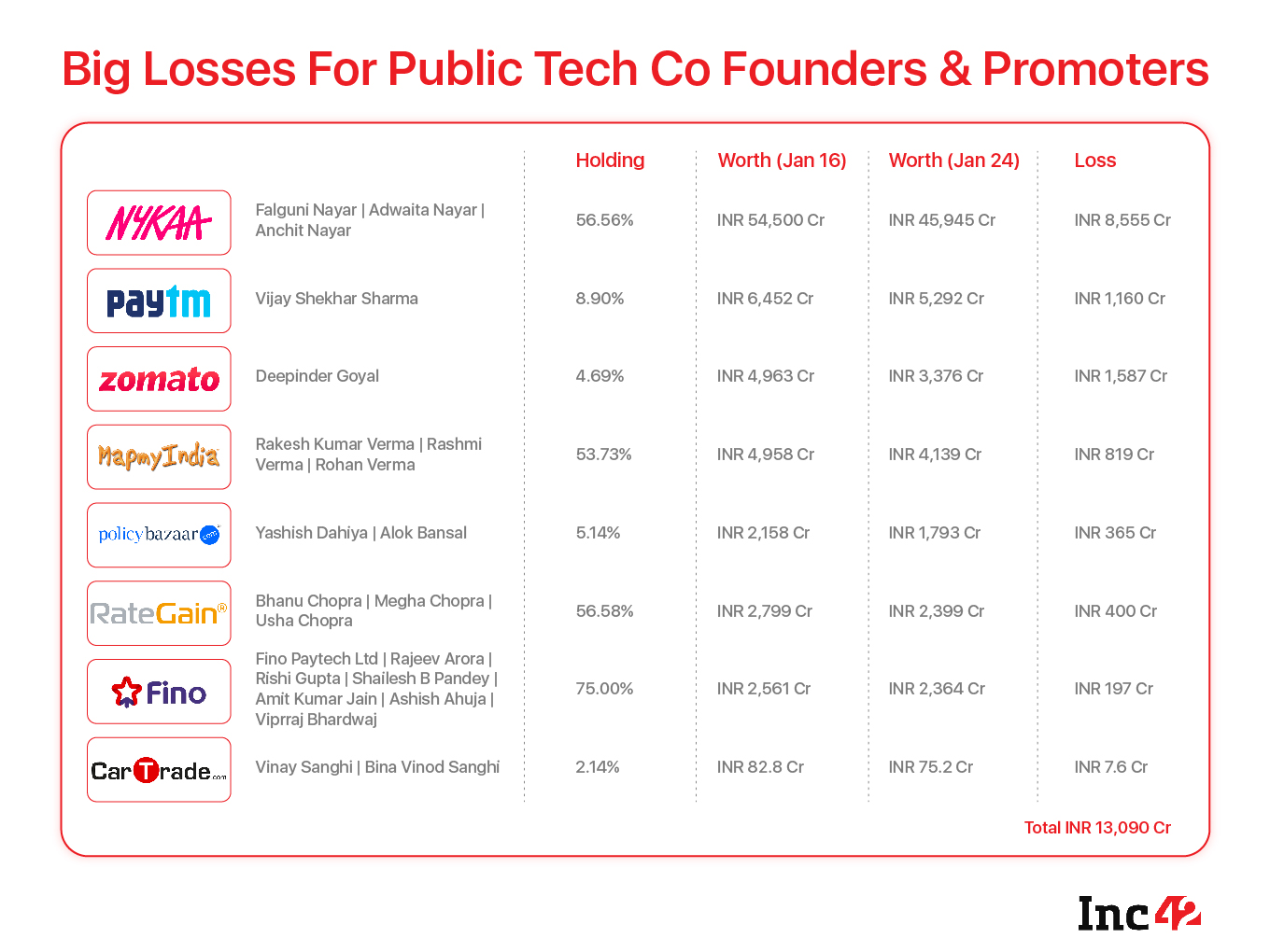 Nykaa, which had one of the most successful IPOs in India last year, saw its valuation soar to $13.5 Bn in the immediate aftermath of the listing. But it has also seen the most erosion in value due to the stock market crash.

Paytm founder Vijay Shekhar Sharma owns 8.90% stake in the company after the much-hyped IPO last year. Paytm had a forgetful debut as the share price tanked 27% upon listing and closed the day at INR 1,564, a big fall from the issue price of INR 2,150. Now, the company’s stock is priced at INR 917.35, which is a whopping 57% lower than the listing price.

Paytm’s stock has been called a bubble by many observers. The share price has gone from bad to worse since listing — it is currently trading at around INR 900, almost 55% down from its issue price of INR 2,150.

From the week-ago period, Zomato’s stock has lost nearly 32% of its value and ended Monday at INR 91.40, a fall of 19% from the day’s opening price.

Zomato has been trading at significantly lower than its listed price for the past week and ended Monday, January 24, 2022, at INR 91 after losing nearly 20% value in one day.

The company’s market cap has fallen to INR 71,944.51 Cr (just under $10 Bn), whereas the market cap had crossed the INR 1 Lakh Cr on the first day of listing in July last year.

MapmyIndia Promoters Holding Down By $109 Mn

The mapping and location services company had one of the most successful IPOs last year owing to its dominance within this sector and the diversified business model.

After its listing in November last year, online insurance marketplace Policybazaar’s parent company PB Fintech, had closed the opening day with a market cap of INR 54,070 Cr, with the stock at INR 1,202.90, nearly 23% higher than the issue price.

At the end of the trading day on Monday, January 24, travel tech company RateGain’s stock price had fallen to INR 401.30 from the week-ago price of INR 496.

The drop of nearly 20% in the past five trading sessions has resulted in the company’s market cap falling by INR 800 Cr ($100 Mn+), which has had a deep impact on the worth of founder and promoter group’s holdings.

Fino Promoters Holding Down By 10%

CarTrade Promoter Stake Worth Down By 10%

The promoter group of founder Vinay Sanghi and family holds 2.14% of the company after the IPO, which equals 9,80,763 shares worth INR 75.3 Cr. The drop in share price over the past week has eroded INR 7 Cr from Sanghi’s holding in the company.

Will Listed Tech Companies Bounce Back?

Given the stock market crash across sectors, investors and market analysts believe a major price and valuation correction is imminent in the Indian market.

So far, the primary objective of Indian tech IPOs has been to raise capital from the market at the time of listing. In that sense most of these tech companies have been successful in their listings, but the ongoing decline will affect future listings of tech companies in 2022.

The nosediving of tech stocks also shows that founders and promoters have shown little to no control over the share price in the market, particularly since they also lack profitability. To turn things around, tech companies have to fight off competition without overspending, achieve profitability and also solve the lack of clarity in business models to win over investors once again.