India Vs China Turns Electric: How The Two Markets Stack Up For Electric Vehicles

India Vs China Turns Electric: How The Two Markets Stack Up For Electric Vehicles 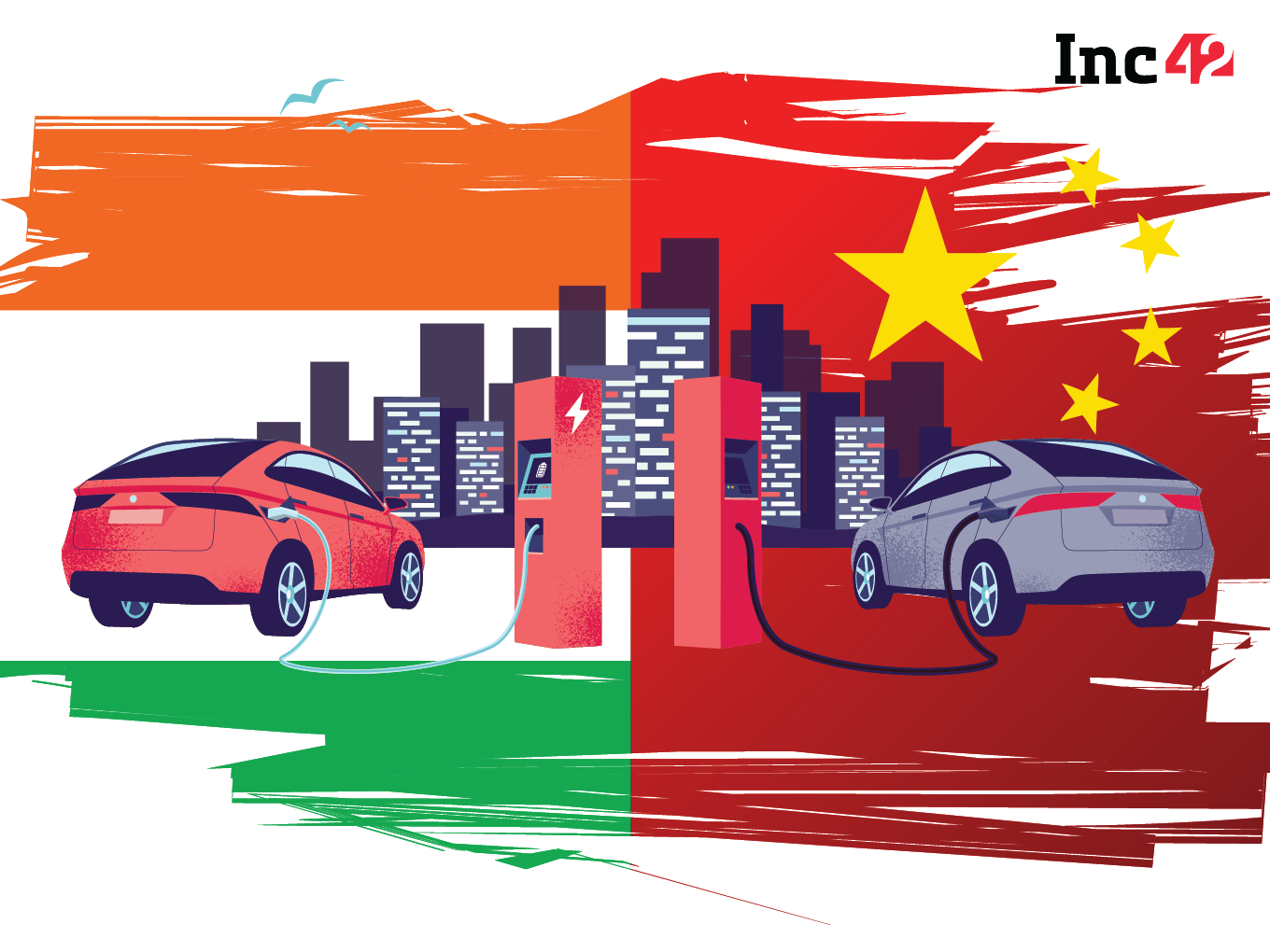 How does India stack up to China in terms of EV adoption?

India’s transport sector has predominantly been driven by the growth of the internal combustion engine (ICE) vehicles, but this is slowly changing. The growing middle-income class, its rising aspirations and the availability of easier financing were some of the key factors that led to increased demand for personal mobility and proliferation of two and four-wheelers in recent decades. However, all that changed this year as car sales plummeted and the government’s push for EVs nudged manufacturers into changing their strategy and manufacturing.

India expressed its interest towards the usage of electric vehicles (EVs) back in 2017, when the then transport minister, Nitin Gadkari, announced that India would move to 100% electric cars by 2030.

China, a country known for being a manufacturing hub and the most populated country is also known for its excellent implementation of electric vehicles. In 2018, more electric cars were sold in China than in the rest of the world combined. The Chinese government has spent nearly $60 Bn in the last decade to create an industry that builds electric cars, while also reducing the number of licenses available for gasoline-powered cars to increase demand for electric cars.

The two most populated nations in the world have signed environment agreements to reduce their carbon emissions. It then becomes interesting to understand the developments towards the adoption of EVs in the two nations.

India’s experience with the electric vehicles began almost two decades ago with the launch of an electric three-wheeler named Vikram SAFA developed by Scooters India Ltd.

Mahindra and Mahindra launched its first electric-three wheeler in 2001 in the name of ‘Bijlee’. The same year, a Bengaluru-based company ‘REVA’ entered the Indian EV sector in the four-wheeler segment and sold more than 1500 units. In the four-wheeler segment, Mahindra launched E2O in 2014 with two battery variants of 48 Volts and 72 Volts. Tata Motors also entered in the electric car segment with the introduction of the Tata Tigor with a battery capacity of 72 Volts and a maximum power of 30 KW. MG Motor launched the high-end ZS EV in December, whereas Porsche is also joining the game with the launch of its premium Taycan EV.

While projecting numbers would be too soon for India, as per a report by Techsciresearch, China’s electric vehicle market is projected to grow from around USD 74 Bn in 2018 to USD 330 Bn by 2024, exhibiting a CAGR of over 28% during the forecast period.

Sales of electric, CNG and hybrid vehicles in China reached nearly 1.5 Mn units in 2019, whereas the sales of all passenger vehicles reached 22 Mn in the country. So even a country with more robust infrastructure than India has barely reached 10% penetration.

The growth in the Chinese market can be attributed to increasing concerns about rising pollution levels, growing demand for clean fuel and increasing affordability of electric vehicles from leading automobile manufacturers in the country. Rising investments by several key OEMs to develop premium quality and more affordable electric vehicles coupled with expanding charging infrastructure.

The same situation is playing out in India as well as government policy, the need for social and environmental impact as well as energy conservation targets have forced the market into EV mode.

The government of India has demonstrated a strong commitment for introducing electric mobility in India and announced the ambitious plan of making India a primarily electric car driven nation by 2030 and launched a scheme for the Faster Adoption and Manufacturing of (Hybrid &) Electric Vehicles in India (FAME India) under the National Electric Mobility Mission (NEMM) in 2015.

India too is relying on EVs to reduce its oil imports. The adoption of electric vehicles is expected to reduce dependence on oil imports which are a serious liability for the country. It will also promote power capacity addition in India thereby enhancing energy security of the country and also positively impact the pollution levels.

The debate between electric vehicles and the availability of charging stations has been a long one. The chicken and egg situation of EV and charging infrastructure has confused many about whether launching vehicles without adequate charging stations would be feasible or not.

China had 4,66,101 public charging points by the end of September 2019 with more than 54,000 in Beijing alone, according to the China Electric Vehicle Charging Infrastructure Promotion Alliance. 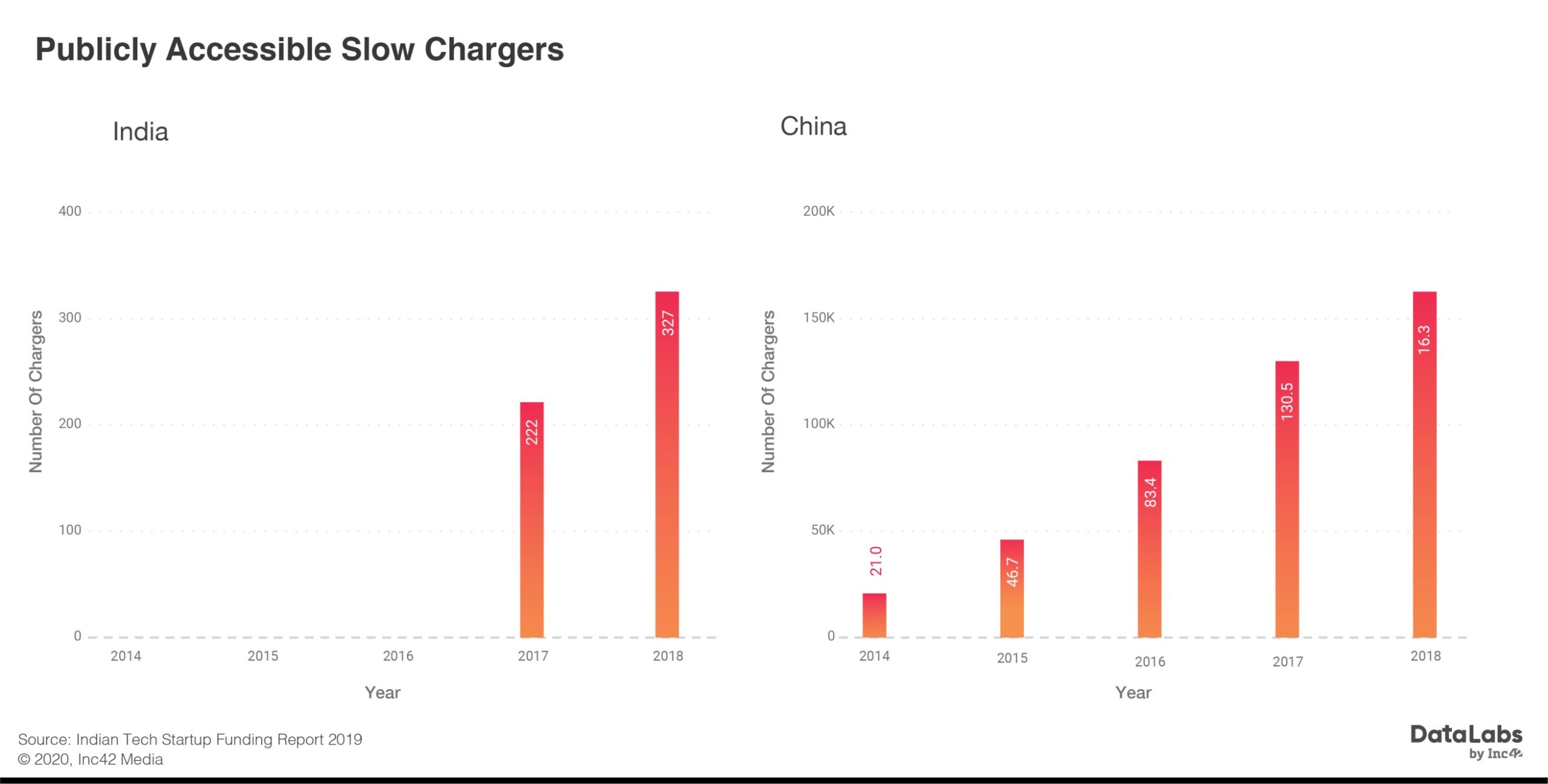 Bloomberg in its Electric Vehicle Outlook 2019 states that the charging infrastructure (both fast and slow) needs to come first to ensure a smooth transition for end-users, especially when range anxiety and charging time are considered major barriers to adoption. In addition to charging points, manufacturers have also been debating the lack of private parking spaces which poses a hindrance for electric vehicle adoption. According to auto giant Maruti Suzuki’s research, 60% of Indian customers don’t have their own parking space. “There is no way they can charge the vehicle, therefore they won’t adopt it,” said CV Raman, senior executive director (engineering) of Maruti Suzuki India.

Despite many economic and environmental benefits of EVs and hybrid vehicles, there lie major challenges with regard to the availability and affordability of components and materials used in manufacturing EVs, including their batteries.

China produces about two-thirds of all lithium-ion batteries and controls most of the world’s lithium processing facilities. Collaborating with local manufacturers through licensing or joint partnerships gives automakers access to cheaper battery technology.

Vehicle manufacturing at low cost remains a challenge but will be solved quickly. The biggest challenges is financing for these vehicles. Because this is a new asset class, traditional financiers are skeptical to finance such assets.

Tesla and China-based Amperex have shown interest in coming onboard the Indian government’s plan to invest INR 50K Cr to build factories for the production of lithium-ion batteries. As part of the government’s electric mobility plans, EV battery production and localisation of battery technology is a high priority area of development.

Resources like copper, lithium, permanent magnets, and related materials and components, are heavily imported by India with import costs increasing over the years. Permanent magnets that are used in manufacturing synchronous motors are largely manufactured from rare earth elements where China has a quasi-monopoly. 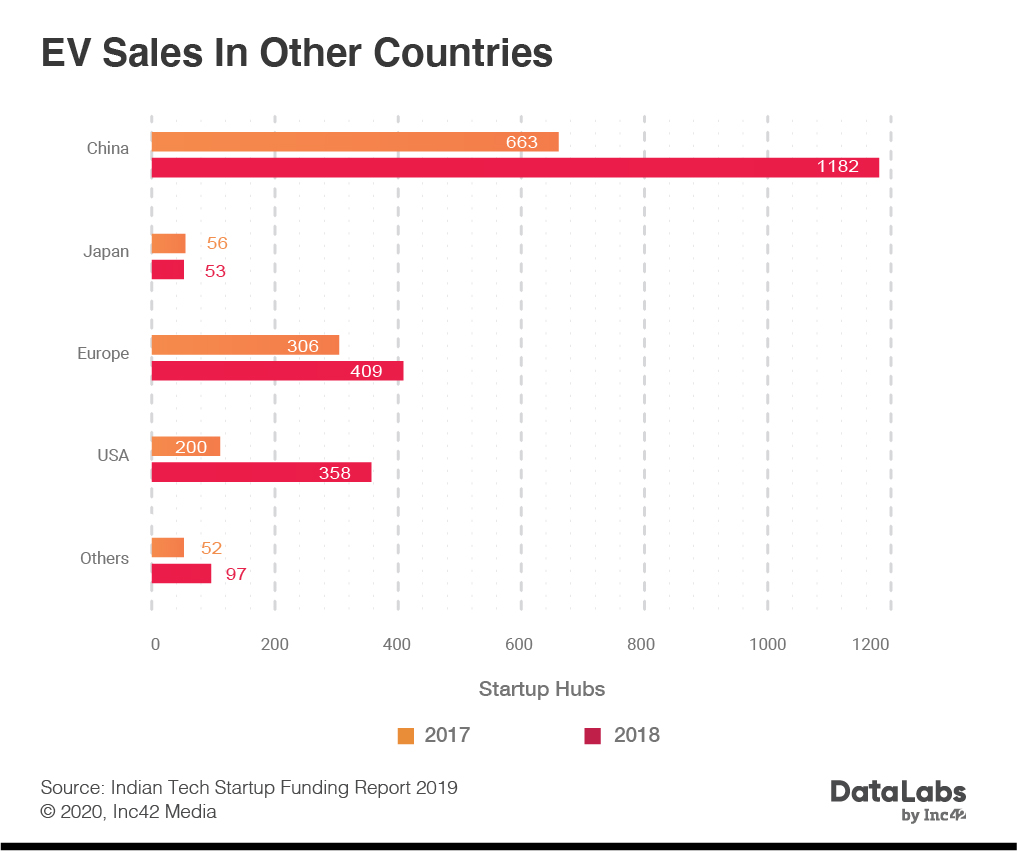 The company has supplied more than 200 electric buses in India, which are running in various cities — Bengaluru, Rajkot, New Delhi, Hyderabad, Goa, Kochi, Chandigarh, Vijayawada, Manali, Mumbai, and Surat, among others.

Pricing Barriers In EVs For India Vs China

Mass economies of scale along with government incentives help China to manufacture EVs at a lower cost, thereby releasing them in the market at a lower price as compared to ICE vehicles and even other country markets.

In India, the cost of the battery for electric vehicles pumps up the cost. The most widely used battery materials today are nickel-metal hydride (NiMH) and lithium-ion (LiON) which are largely imported. Multiple factors like demand-supply gaps and uneconomically low volumes lead to the high cost of manufacturing EVs.

On the age-old debate about the gap between the ambitious EV target and battery manufacturing, Ravneet S Phokela, the chief business officer at Ather Energy told Inc42,

“The shortcoming is not the battery but lithium-ion cells. If India aims to go 100% electric then it must adopt the strategy of going back into the value chain and reduce dependency on others to enable cost benefits.”

India’s dependency on the Chinese EV market is an optional one, believes Phokela. Having worked with a Finnish mobile manufacturing company earlier and dealing with competition from China he told us,

“Yes, the Chinese goods are a cheaper alternative but the electric vehicle segment is a different class and in the long run, quality matters more.”

The Indian consumer is opening up to the idea of an electric vehicle, which is evident by the jump in the number of units sold in 2019 as compared to last year. The Society of Manufacturers of Electric Vehicles stated that the sale of two-wheeler electric vehicles witnessed a 130% increase to reach 1,26,000 units. The sale of three-wheeled electric vehicles registered at 6,30,000 units while four-wheelers jumped 200% to 3600 units. 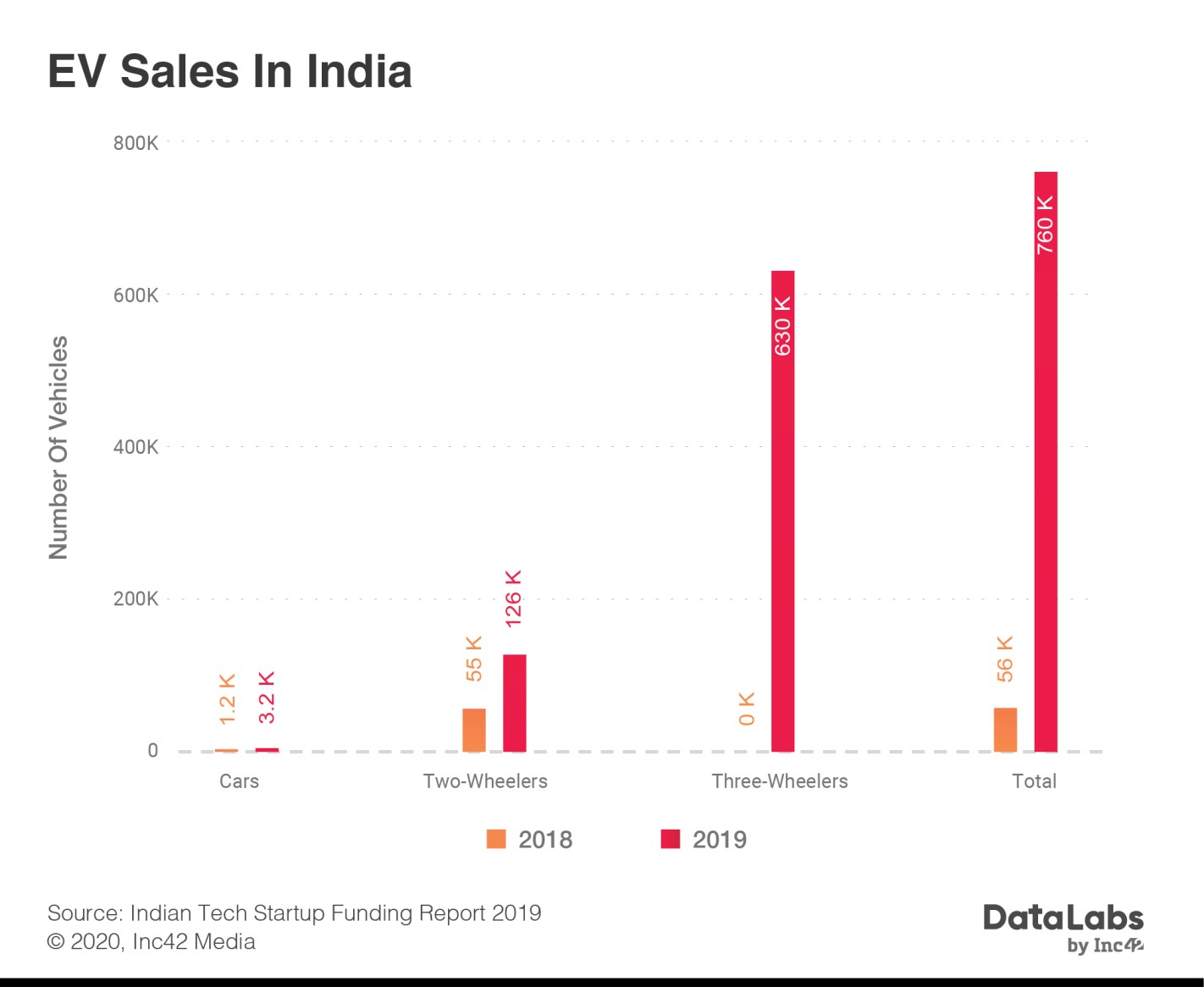 The numbers are growing, but when compared to China, they only reflect a small fraction of it. Where India has a fleet size of 0.6 million units, China has 250 million units in circulation stated Bloomberg’s Electric Vehicle Outlook 2019.

However, China recently cut subsidies for non-electric vehicles substantially this year as part of an overall plan to reduce subsidies, making the vehicles costlier, indicating that the time for incentives may be over and that the market is moving towards maturity.

A Bloomberg report stated that India and other emerging economies have transitioned to electric much slower than expected, leading to a globally fragmented auto market. In markets like India, two-wheelers and three-wheelers are more attractive targets for electrification in the short term. And this is being seen in the rapid adoption for EV two-wheelers as well as three-wheelers such as e-rickshaws.

Will India Manage To Surpass China In The Near Future?

EVs are an inevitable future of India amidst the alarming pollution levels. Thereby, an integrated policy on the future of mobility with a focus on zero-emission mobility is the call of the hour. However, such a policy should also consider the financial health of the industry, revenue to the government and employment opportunities to millions and millions.

The transition towards electric mobility offers India not only an opportunity to improve efficiency and transform the transport sector but also addresses several issues that the country is currently grappling with. The concerns regarding energy security and rising current account deficit (CAD) on account of rising fossil fuel imports can be addressed with the uptake of electric mobility.