Besides startup funding slowdown and layoffs, an M&A wave is imminent bringing many distress sales with it

These days, it’s not news stories or interviews, but Twitter, where founders proclaim the state of the market and CEOs of unicorns declare their vision. Of course, it’s only then that things become official. Like we are seeing with talk about startup funding slowdown in India, layoffs and the imminent M&A wave and distress sales that are about to hit the Indian startup ecosystem. April 2022 made things pretty clear for the startup ecosystem and the funding data is there to back it up.

Not a single unicorn, startup funding going to the lowest levels compared to the last three months or even April 2021. And even though dozens of startups announced their IPO plans, not a single tech startup has listed this year.

We looked at this potentiality in December last year when recapping 2021. The telltale signs were there for the past six months, but now it’s become clear and apparent. We’ll take a stock of the situation and how things might play out over the next six months or so, but first a short detour:

The Heat Is On For Startups

One only needs to look at the year to date funding and the number of unicorns in 2022 in comparison to the first four months of 2021 to see where the market is trending. It’s a time for sober valuations and the unicorn rush has well and truly slowed down.

Yes, India has 99 unicorns right now, and the 100th unicorn might just be around the corner, but let not that milestone distract us from the reality.

Compared to eight unicorns in this month in 2021, April 2022 has been completely dry as far as new unicorns are concerned. In terms of funding, the month-on-month figures have declined from $4.6 Bn in January to $3.4 Bn in March and now $2.6 Bn this month. We are in the midst of a slowdown when it comes to startup funding in India and investors with ageing portfolios are pushing them for profitability. 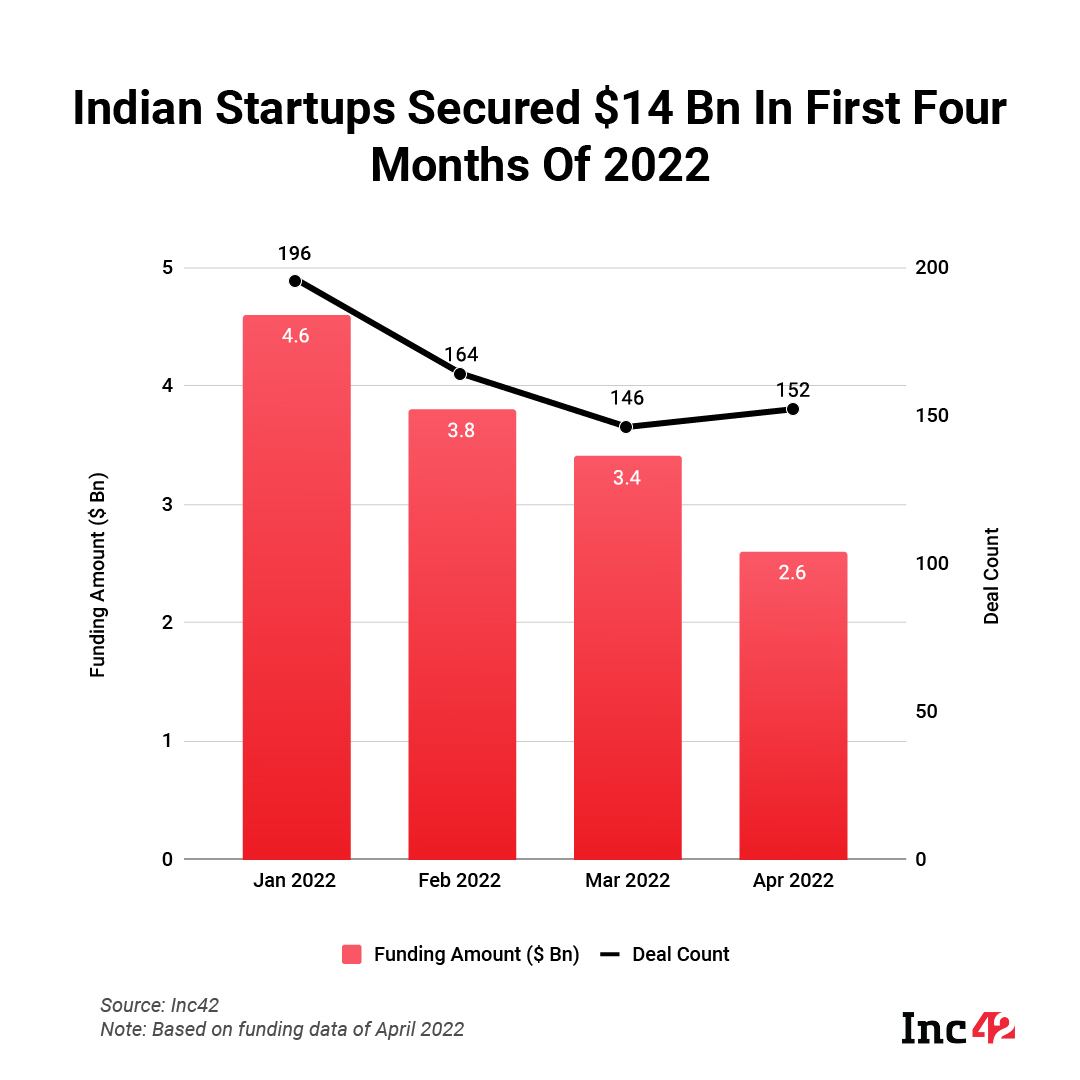 Further, the IPO frenzy expected in 2022 has also not panned out with many startups such as Delhivery, ixigo, and others that had already submitted their DRHPs have now delayed plans. Not a single tech IPO has hit the market this year so far. This is another sign that the boom expected in mid-2021 was perhaps a bit premature.

The fact that this coincides with several incidents of irregularities at major startups in India or with an Indian connection has only made matters worse for startup funding in India in 2022. The combination of investment slowdown and the bigger focus on corporate governance and financial standards is likely to lead to more layoffs, down rounds for companies and distress M&As.

This year has already seen well over 1,700 layoffs in the Indian startup ecosystem, led by edtech unicorn Unacademy, with employees at Trell, Blinkit, Meesho, Furlenco, Lido, OKCredit and others also laid off. This is just the beginning unfortunately and if the funding slowdown for Indian startups does not ease soon, there can be more.

A lot of it has to do with startups undertaking expansion plans and gearing up for it by hiring heavily in the past year. A lot of this hiring was built on expectations that new business opportunities will pay off, but in other cases, companies acquired smaller players which led to bloat.

“Some founders will not make it to the other side. Job cuts are natural cause employees were rightly demanding their part of the gold rush,” tweeted Amrish Rau, CEO of Pine Labs.

As these expansion bets, new verticals and acquisitions bog down the pace of growth and profitability, startups are now shedding weight as in the case of Unacademy which has shut down its K-12 vertical. Layoffs are expected to continue at companies that have loss-making units or verticals. Only sustainable growth will beget investments.

If the stock market performance of the tech startups that IPOed in 2021 is any indication — more on this later — we are likely to see a major correction in valuations of startups.

HNIs and investors will prefer to exit through IPOs and make a killing in the public markets, rather than invest at a super high valuation right now and risk a dud when the exit opportunity arises. That may sound like a safe bet, but that’s the name of the game right now.

In recent months, VCs such as Sequoia have made statements about focussing more sharply on corporate governance and financial practices of a company. This has come in light of allegations against many startups in Sequoia’s portfolio, including Trell, BharatPe and Zilingo. Founders might have to disclose full details of family investments in the company as well as the involvement of family members in key positions.

Investors believe that this is a sign of the maturity of the Indian ecosystem. That corporate governance has become a huge focal point is undoubtable, but this is likely to lead to stretched timelines for deals in many cases.

M&As On The Table

This year, we have already seen 139 M&As, which is more than 70% of the total number of M&As recorded by Inc42 in all of 2021. This indicates that the market is trending towards more frequent consolidation, and the startups that survive will be the ones that focus on unit economics, efficiency and lean growth.

Granted that many of these acquisitions are D2C startups and sellers being taken over by houses of brands and ecommerce roll-ups, but beyond that we can expect more deals between competitors amid a consolidation wave. How long will investors continue to fund the roll-ups and HOBs is another question, if they themselves don’t show the right direction for profitability. Many are reportedly looking to raise fresh rounds to fund these acquisitions.

Startups that have raised funds in the past two years and those that managed to keep much of this for runway will have the leverage in this bearish market.

In fact, startups that cannot grow will be forced into a catch-22 of entering into M&As or shutting downs as investors push for exits. M&As and distress sales are likely to be preferred instead of extending the rope, especially for investors with ageing portfolios as their LPs will be pushing for returns.

Case in point, the big fallout at Zilingo between Sequoia and the founders over a similar push, but we have seen something similar happen at Milkbasket last year.

Besides Zomato, the other major listed tech companies also saw crashes this past week. Here’s how the stocks have done since listing: 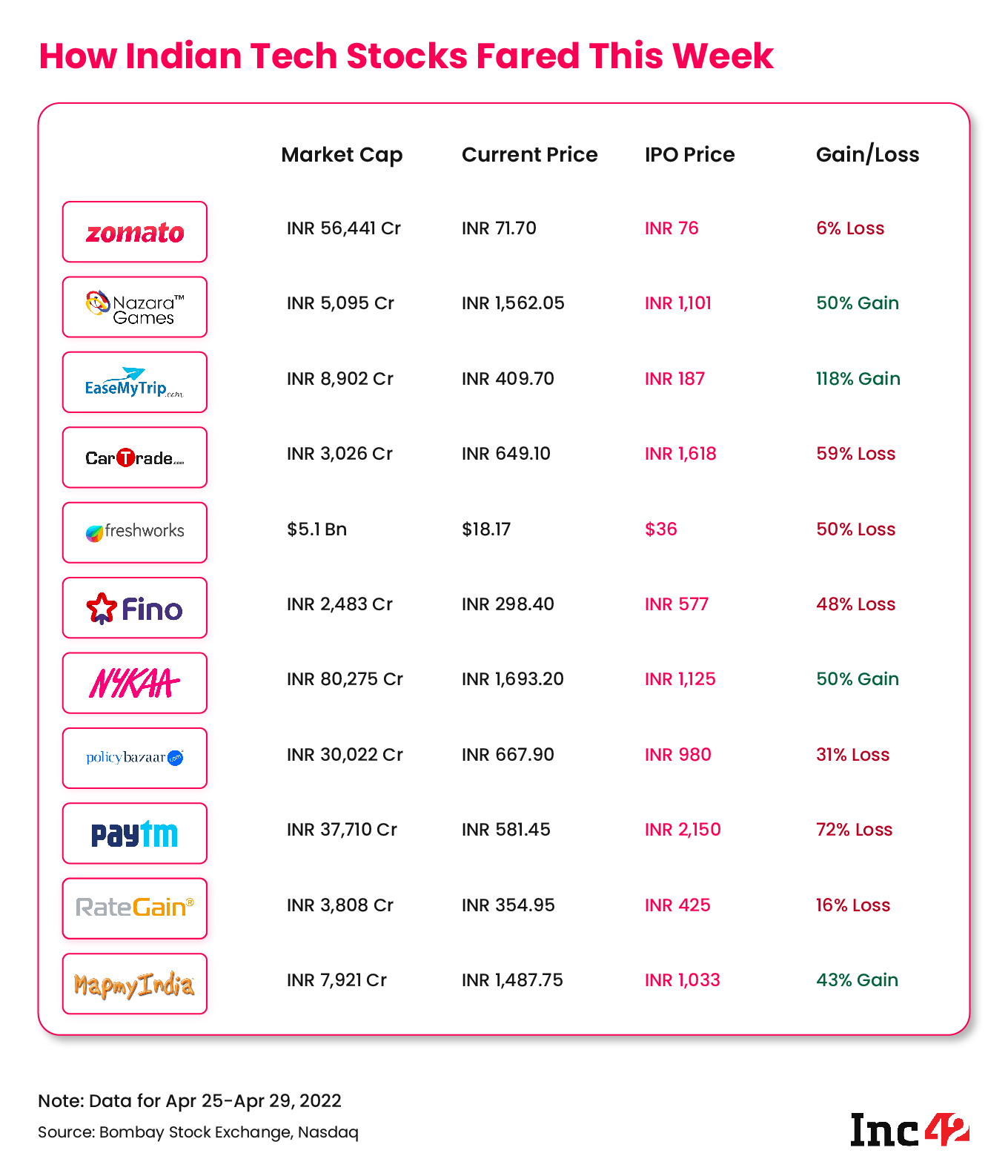 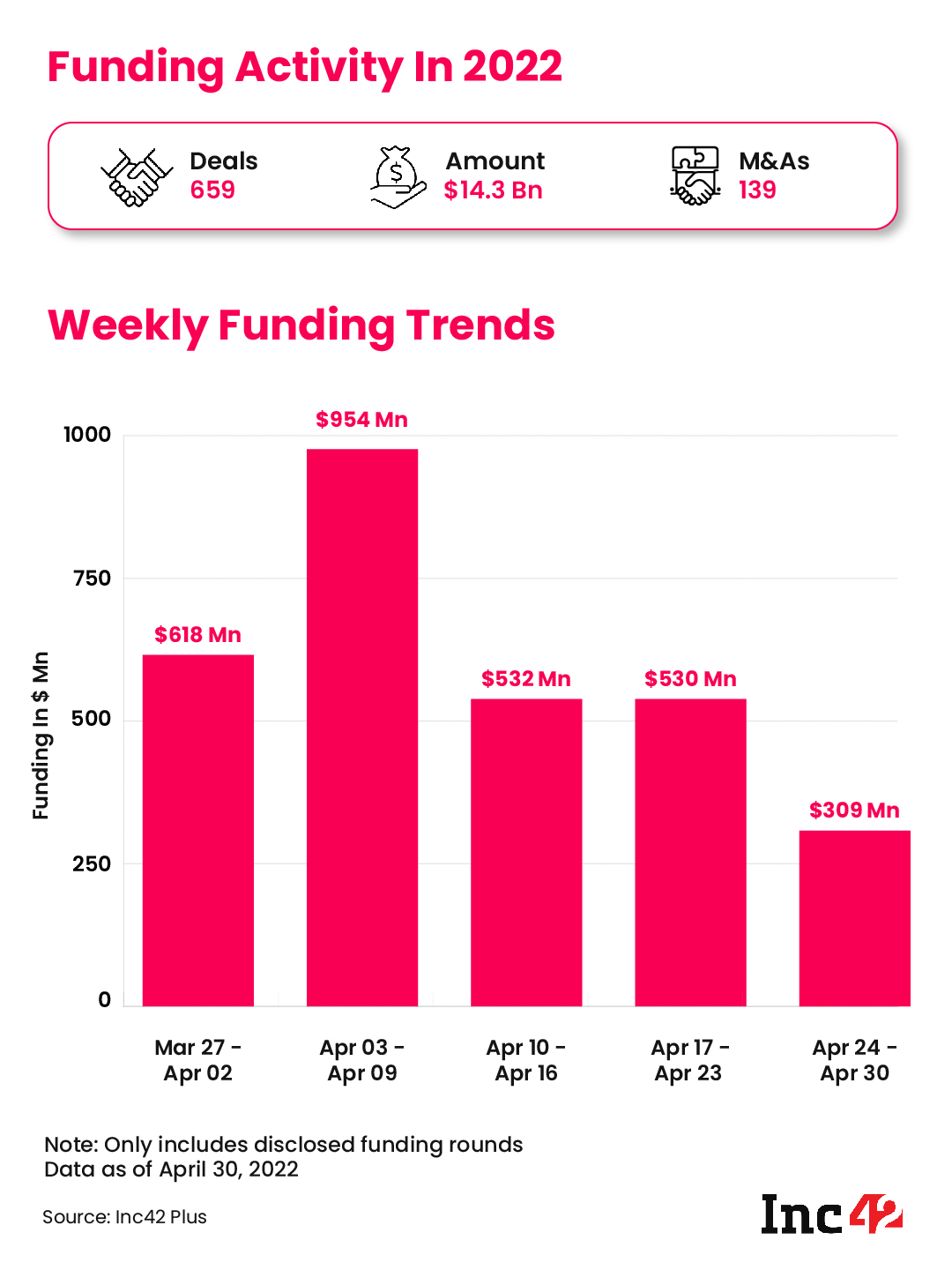 That’s all for this week. See you next Sunday with another weekly wrap-up and a look at startup funding in India.