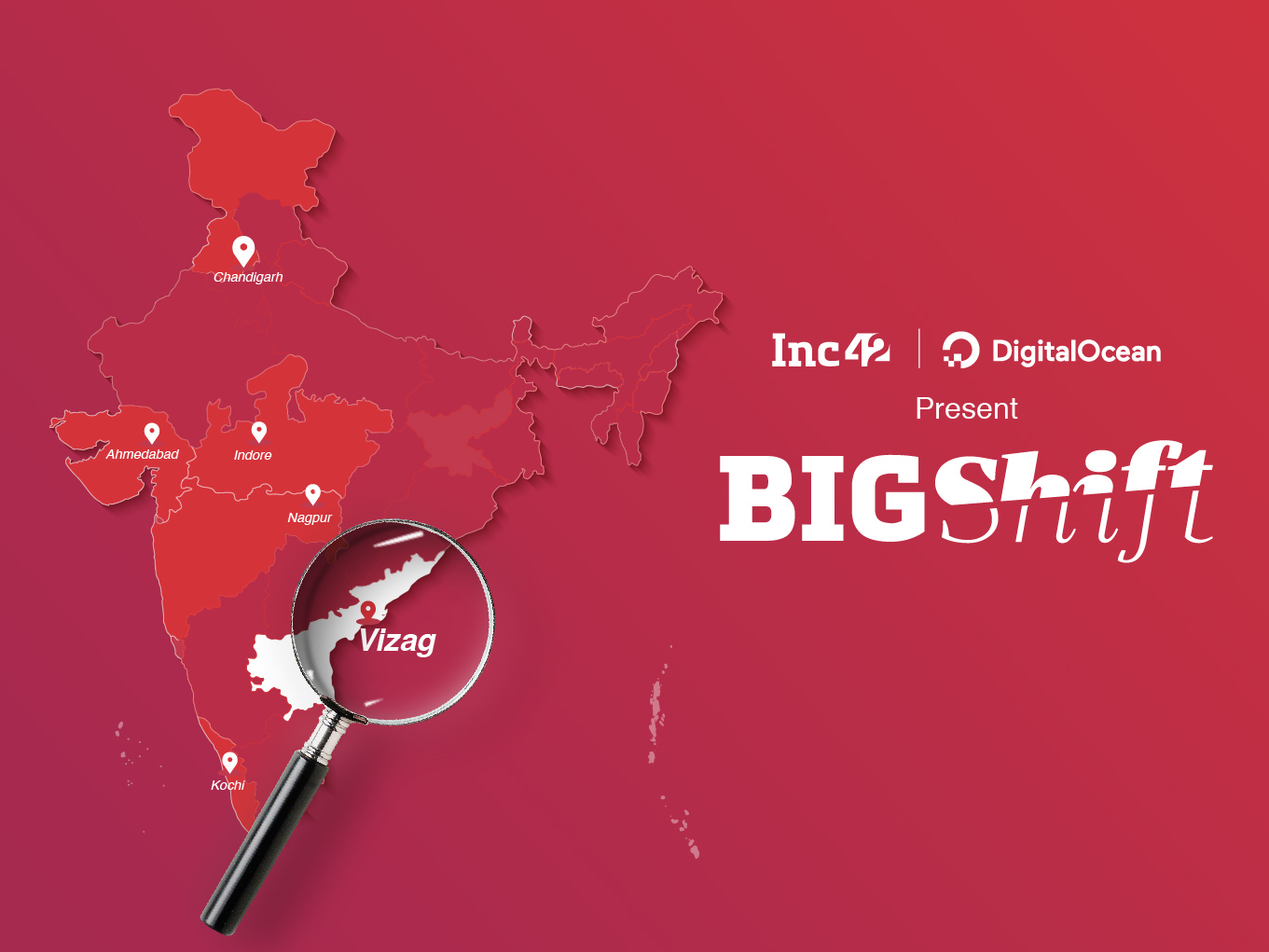 Inc42 and DigitalOcean’s BIGShift initiative will conclude in Vizag, on October 4 at APIS.

Hugging the southeastern coast of India, Andhra Pradesh has long been known as a technology hub, and these days its claim to fame is as an eco and cultural tourism hub. And as tensions eased off after the formation of Telangana, the state of Andhra Pradesh is now ready to do business and has been nurturing startups at various levels.

Backing that notion is the fact that AP earned the top rank in the DIPP and World Bank’s Ease of Doing Business Index among Indian states. According to DataLabs by Inc42, in 2018, the state was home to over 800 startups, and many more have come up since then.

The government has also actively started participating to ease the growth of startups, and this has further resulted in the rise of entrepreneurs in the state. The AP government has taken measures such as the Innovation and Startup Policy 2014-2020, which aims to strengthen the startup ecosystem in the state and also set up an Innovation and Capacity Building Mission. Further to this, it invests in startups by participating in SEBI-approved VC funds, contributing up to 15% as a limited partner.

Amongst the progressive cities in the state, Visakhapatnam, popularly known as Vizag, and Guntur are the major hubs for startups. Secondary research by DataLabs revealed that from 2014 to the first quarter of 2019, 5 startups got funded in Vizag with the total amount crossing $11 Mn. Among the organisations trying to promote the startups in the city is NASSCOM with its NASSCOM 10K startup warehouse, set up in association with the AP government.

To be a part of the initiatives of the government and help boost the startups of the city, Inc42 and DigitalOcean are heading to Vizag with the BIGShift tour. The initiative aims to bring the startups of the city and its entrepreneurs together to help them connect with each other as well as the stalwarts from the ecosystem. Considering the fact that Vizag will be the final destination in BIGShift’s six-city tour, the applications for it are free of cost.

In December 2016, the AP government launched the Fintech Valley Vizag initiative with the aim to build infrastructure for startups of the financial sector, and in turn, attract investors and startups to set up their offices in the city.

For this initiative, it entered into agreements with several firms such as HDFC Bank, Whub of Hong Kong, Fintech Association of Hong Kong, SOSA of Israel, Singex, among others. This was a part of their efforts to create a complete ecosystem for fintech startups.

Further to these, to create a world-class technology startup ecosystem by fostering entrepreneurship and a culture of innovation, the AP government set up the Andhra Pradesh Innovation Society (APIS). APIS is the dedicated agency that oversees the implementation of the Innovation and Startup Policy in the state.

The most prominent in the enabler community of a city includes investing organisations present and active there. According to DataLabs by Inc42, there are nine active investment companies in Vizag. These include names such as Alcove Partners, Govin Capital, which act as both investors as well as accelerators, and provide mentorship to startups.

The IT Association of Andhra Pradesh (ITAAP) is an industry association whose members offer investment and mentorship to tech startups. Amongst individual investors, the most prominent are names such as Ravi Eswarapu of Alcove Partners and MV Sri Bharath of TiE Amaravathi, Winny Patro, CEO of APITA, Y. V. Ratna Kumar, chairman and managing director of APIMS and Sanjay Vijayakumar, founder and chairman of Startup Village, among others.

In the incubator and accelerator category, Vizag is far more active, supporting its startups to grow and scale-up. The most prominent names are the Atal Incubation Centre in AMTZ (AP MedTech Zone) and the NASSCOM 10K initiative. Though NASSCOM had set up its warehouse in the city earlier, today it supports the startups virtually through events, initiatives and more. Among accelerators, names such as SAI (Startup Accelerator India) and Gastrotope are the most active. Xlr8AP is a joint initiative of the AP state government, FICCI (Federation of Indian Chambers of Commerce & Industry) and University of Texas, Austin. These programmes have been facilitated by the AP government to help startups grow and scale up sustainably.

Coworking Spaces For The Startups:

Apart from catering to the startup incubation needs, Vizag has been actively providing them with coworking spaces for smooth functioning and operations. As per DataLabs by Inc42 there are over 11 coworking spaces in the city. There are many prominent names in coworking spaces providing the startups with the infrastructure necessities such as Regus, Nanospace, Quebexpro, My First Office and Sunrise Incubation Hub. Sunrise Incubation Hub is the state government’s workspace and startups here get a chance to use the coworking facilities for free, it is also a part of the NASSCOM 10K initiative.

Private companies act as influencers that can enable networking opportunities, and thereby ensure a greater number of interactions between startups for collaboration. Some of them are TiE Amaravathi, ITAAP, CII- Andhra Pradesh and FICCI.

Needless to say, the AP government has been playing an active role as an enabler by leveraging a common platform, Andhra Pradesh State Innovation & Startup Policy, to onboard key stakeholders of the ecosystem. The policy has five key pillars:

Further to this, in May 2019 Anthill Ventures partnered with the AP government for its market access programme called A-Scale. It aims to help the government identify the smart city solutions across Asia to support the Smart City Mission of the government of India. On top of that, startups get the opportunity to connect with the investor community and expand their business horizons by pitching to the right target audience.

The Startup Story Of Vizag

Acting as a testament to the growth and vigour of Vizag’s startup ecosystem are its startups, that have made their mark in the market and have attracted investor attention. Names such as Dronamaps, which was incubated at NASSCOM 10K are among the most prominent startups in Vizag. Through NASSCOM, it showcased products at the NASSCOM Product Conclave, NILF World Congress and the NASSCOM Innotrek Program in Silicon Valley. Dronamaps was also one of the pitch participants in BIGShift 2017 at Vizag.

Another name among the city’s prominent startups is Fluentgrid, a software products company. In February 2019, the startup won two ‘Making of Developed India (MODI) Awards 2019’ of ET Now. Two of its apps have won awards in consumer mobile applications and mobile innovations. Further to this, Murali Krishna Gannamani, managing director and CEO, Fluentgrid, was recognised by the Great Manager Institute and Forbes India as one of the top 100 Great People Managers in India.

Vizag is the last city in Inc42’s six-city tour of BIGShift. BIGShift has witnessed many amazing startups and budding entrepreneurs come forward to network, engage and grow with their fellow entrepreneurs. Starting from Chandigarh, BIGShift has travelled the breadth of the country with events at Nagpur, Kochi, Indore and Ahmedabad.

The initiative brought some amazing and innovative ideas at play in Tier 2 cities to the spotlight. It gave them an opportunity to bring their creativity in front of a gathering of early startups like themselves as well as the stakeholders from their city’s startup ecosystem. BIGShift is sure to conclude in style and will be a bigger affair than any of its predecessors considering the huge number of applications already flowing in huge numbers for BIGShift Vizag edition.

The highlight of the evening will be the BIGShift Pitch which will give five startups from Vizag an opportunity to showcase their innovative ideas and business models to a jury consisting of industry stalwarts. They will receive incentives such as a direct entry into DigitalOcean’s Hatch Program which offers infrastructure credits, priority support, training and access to the startup community.