While startups are likely to downsize, it will be interesting to see how they deal with retention and ESOPs over the funding winter

As startups get ready for the long funding winter, one thing that has not been talked about so far is how these conservative times will change talent retention and ESOPs — two aspects that are intrinsically linked with each other.

After a record number and value of ESOP buybacks in 2021 and this year so far (look out for the data later) we are coming to a point where buybacks and secondary rounds will be rather infrequent.

This is likely to result in a migration and reverse migration of key talent from startups to big tech and IT giants, at least that’s what headhunters and recruiters believe. We’ll dive into this issue, but here are updates on companies in deep waters:

The so-called Great Resignation since early 2021 has seen talent jump from corporates and big tech to startups or to start off their independent ventures. But now the flow of talent will soon be reversed. That’s something startups just cannot do anything about, because much of their hold on talent was through their access to capital.

As we saw in our analysis on the talent wars last year, the unicorns that had the firepower in terms of high pay, perks and material benefits commanded the best talent.

Add the possibility of early ESOP vesting and even mid-to-senior level engineering roles easily saw salaries of well over INR 60 Lakh per year, with many jumping from one startup to another for 2x-3x hikes. According to a study by EMA Partners and CIEL HR Services from September last year, Indian unicorns hired close to 150K employees in the first three quarters of 2021.

If that was not enough, companies offered bikes and other perks for roles where talent was scarce. That was the case in early stage companies too, as per our discussions with founders over the past year.

Now that most investors have warned against profligacy — Sequoia, BEENEXT, YC and others — startups cannot just throw money at talent. Will this hurt retention? Will it make startups a less attractive destination for new talent?

The general consensus in the HR industry is that now corporates and big tech companies that have large cash reserves are likely to capitalise on the opportunity to attract talent with slightly higher pay and job stability.

Every major corporation has a digital services or platform entity. Jio Platforms, Tata Digital, Adani Digital are newer examples, while the likes of TCS, Infosys and TechM are looking to ready themselves for the future. And then there are global giants such as Google, Amazon, Apple, Meta and 100s of other large tech companies.

They are all competing for talent from the same pool as startups and already hiring several of the employees let go by startups this year. These behemoths with massive reserves are better placed to pay premium salaries.

Startups may be laying off thousands, but those retained might get poached eventually, because the startup trump card used in the past couple of years may be unplayable.

We are of course talking about ESOPs and secondary rounds or buyback. Over $42 Bn was raised by Indian startups last year and this led to several ESOP buybacks. More than 29 startups executed ESOP buybacks last year and created a wealth of more than $335 Mn for employees. In 2022, 16 startups have executed buybacks worth $159 Mn till mid-May.

But such instances could become rarer in the second half of 2022 and 2023 in what is being called a 24-month funding winter. This is the feeling among founders of ESOP management platforms in India. The likes of EquityList, Vega Equity, Qapita, trica operate in this space.

There’s little doubt that buyback plans are likely to be delayed, and that it cannot be the sole retention tool for startups. We were told that instead founders need to focus deeply on organic growth and culture.

The former will allow the company to use the revenue generated to pay higher salaries to key talent, while using this time to create a robust culture will lead to organic attraction of talent in the long run. But this is of course easier said than done.

The Question Of Job Stability

The other option for startups with a longer runway will be offering ESOPs to employees with faster vesting, such that by 2023, when the market has recovered, these employees will see the rewards. We have seen the likes of Unacademy already move to monthly vesting of stock options, allowing employees to cash in faster. This is likely to become a norm.

With the funding winter for Indian startups expected by some VCs to last till the end of 2023, one cannot say how steady or secure startups jobs will remain. Over 8,300 layoffs have already been reported in the Indian startup ecosystem this year, and what worked till last year is no longer an option.

So while Indian startups are likely to reassess their headcount for the funding winter, it will be interesting to see how they deal with retention which will remain as big a problem in the next year and harness ESOPs through the crunch. 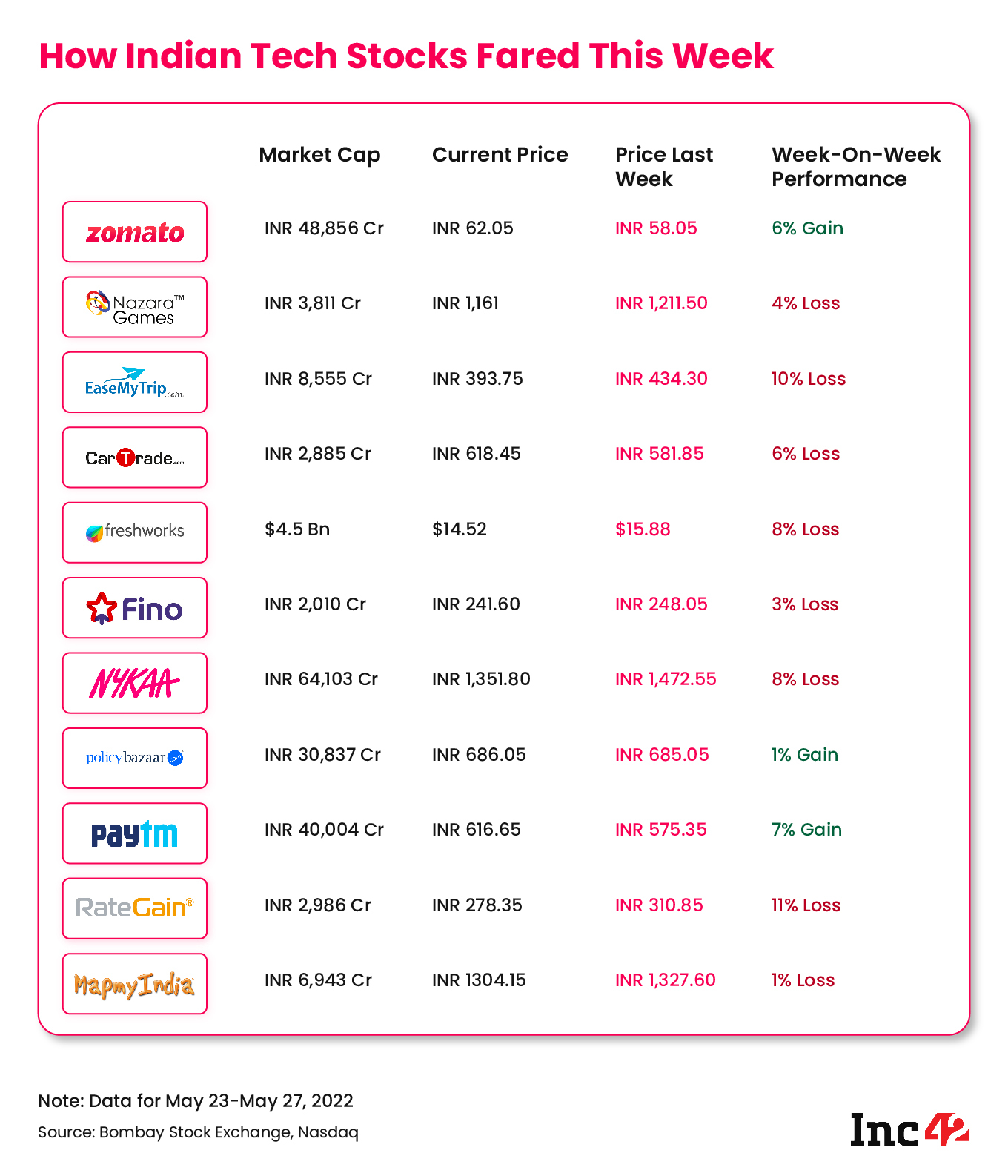 As you can see the funding winter has truly set in for Indian startups with a clear decline in funding, compared to the billions being raised last year. In the past week, the Indian startups managed to raise $258 Mn across 36 funding deals. This is a 38% drop from the $419 Mn that was raised last week. 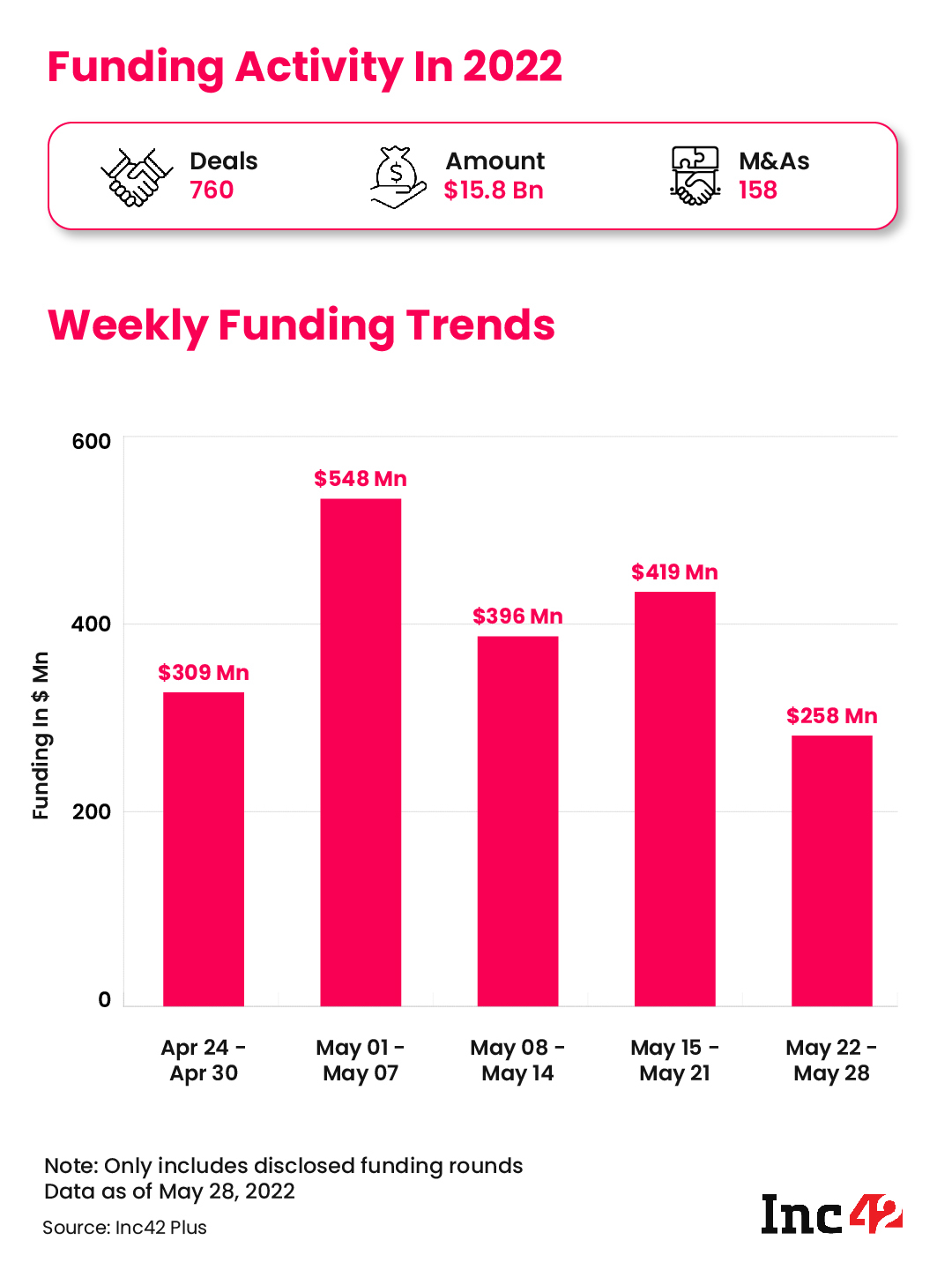 Tesla In India & Other Top Stories

That’s all for this week. See you next Sunday with another weekly wrap-up!