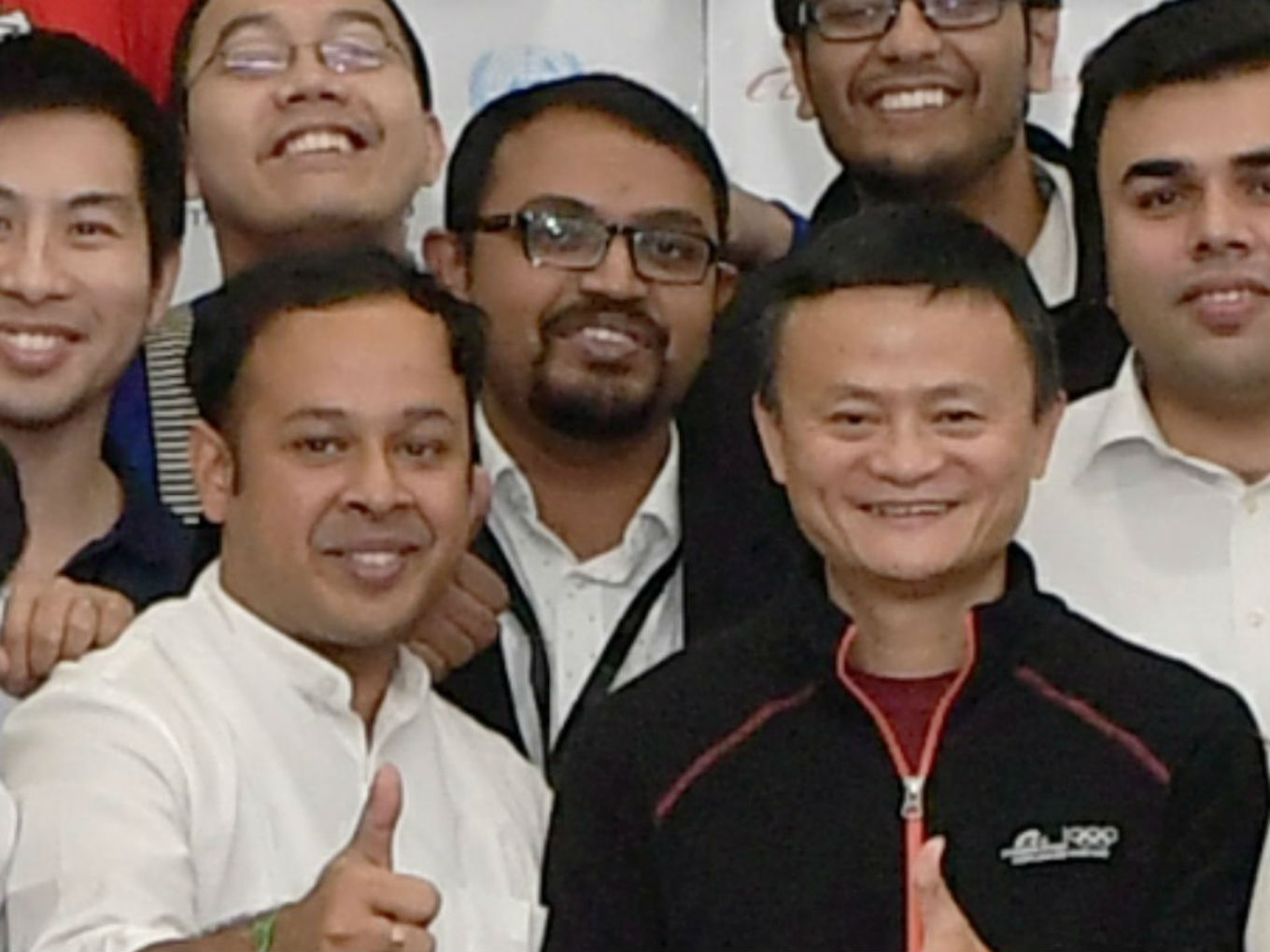 The company is now looking to expand in Ranchi, Bhopal, Indore, Bhubaneswar, and Raipur

This rather straightforward advice of Ma’s stuck with Odisha-based entrepreneur Ananda Mishra, the founder of a hyperlocal delivery startup Grozip which facilitates B2B and B2C deliveries in Tier 2 & 3 cities of India. As a marketplace, the company offers a platform to SMEs for increasing sales and reaching out to more customers.

Ma’s intervention helped Mishra continue to intensify his focus to Tier 2 and 3 cities of India. With 67% of its total population of 1.3 Bn residing in Tier 2 and 3 cities, there is a huge untapped opportunity for any business to target audience of this market.

To get a perspective on the rapid growth in this segment, sample these numbers: a RedSeer report on etailing suggests that Metro cities witnessed slower growth in the number of new shoppers adding up to merely 3 Mn whereas, Tier 2 cities added nearly 10 Mn shoppers in 2017.

Mishra had met Ma during Alibaba’s eFounders Fellowship programme in late 2018, under which the Chinese business magnate has committed to empower 1,000 entrepreneurs in developing countries and turn them into champions over the next five years.

“It doesn’t matter if I failed. At least I passed the concept on to others. Even if I don’t succeed, someone will succeed.” — Jack Ma

The idea for Grozip popped up when Mishra faced infrastructural difficulties in getting products delivered to his parents in Odisha. With a rough idea in place, by 2016 Mishra brought on techies such as Biswajit Rath, Surya Singhari, Sonali Behera, Asha Mishra and Dipti Mishra who started their entrepreneurship journey in Bhubaneshwar.

To begin with, the team decided to build a strong logistics platform which solves the delivery hassles of both the consumers and at the same time helps small businesses grow. Mishra and the team tried to get small businesses and retail stores use their technology-driven back-end to expand their services and reach more markets effectively and quickly

The company started its operations with a subscription-based milk-delivery platform in Bhubaneswar. Though India has several startups providing milk-subscription to Tier 1 markets, for example, Milkbasket, Doodhwala, Mr. Milkman etc; Grozip is one of the few who has identified growth in the Tier 2 markets. This unique proposition of delivering milk to homes in the Tier 2 cities is the USP of Grozip.

Learning From Jack Ma: A Once In A Lifetime Opportunity

One of the biggest barriers that ecommerce companies face in driving their business into smaller towns and villages is one of logistics.

Haphazard and complex naming of layouts and hamlets means a disorganised physical address structure in mid-tier towns. However, with the advent of cheaper smartphone technology and the growing range of connectivity, Indian towns are now much more accessible digital players.

And even while Grozip examined its next alternatives, being mentored by Jack Ma proved to be a major step in its next phase of growth.

Mishra told Inc42, “Our vision is to help small businesses using our logistics platform aligned with one of the visions of Alibaba, and when you get an opportunity to be mentored by the leadership team of Alibaba Group, it’s a lifetime opportunity. Meeting Jack Ma and understanding the growth story of the Alibaba Group was a lifetime moment for me, as a Founder.”

At that time, the company was facing challenges with respect to time of delivery, and trust in the quality as well as the freshness of products. Further, it also struggled with the training of delivery guys and acquiring new customers as quickly as possible.

In the two-week eFellowship programme, Mishra realised that the company’s vision wasn’t established and it was needed for the company and its team to grow further.

Building a 102 years old company with the right culture is every founder’s dream. “Here, we learned what it takes to build an everlasting business. From 18 founders to 70,000 employees working towards one goal and one mission is a thing to accomplish. This could not have been possible without the right people working in the right workplace culture. Every startup should focus on having a value system in place,” Mishra explained.

Thinking In Platforms Not Products

Mishra also said they learned that as a business which connects sellers and buyers together, they need to formulate solutions which not only touch and empower customers but also provide a platform for the vendors to make more money.

“We had been focusing on generating revenue, getting faster and better in terms of revenue, but we realised during the eFellowship that a company needs to grow with its vision and at the same time align the team to that vision in order to survive in the market,” Mishra said.

He believes that Alibaba would have not grown into such a big company if the 18 visionary leaders did not join Jack Ma. “The right culture and value system has to reach each individual in the company and also to its stakeholders. Technologies have never built world-class companies, it is the people behind those technologies who have changed the world,” he added.

The training programme which included professors and leaders from different companies like Tmall Global, Taobao Global, Fliggy, Ling Shou Tong and Alimama, helped Grozip get their perspective on how every company is responsible to make an impact in their own field.

The company considers big ecommerce players like Amazon and Flipkart as its partners and wants to work together to deliver items. Grozip believes that its trust factor in tier 2 and 3 cities along with credibility as milkmen is helping it transform how business functions in small cities of India.

The NextGen Support To SMEs

The increased access to the internet has opened new realms for the Tier 2 and 3 population of India and to leverage this new attraction to technology, several entrepreneurs have played their nickel in the game.

The leading players of ecommerce in India, Amazon and Flipkart, recorded huge growth in their Tier 2 and Tier 3 shoppers in their November 2018 sale. While Amazon recorded more than 82% new customers from Tier 2 and below, Flipkart claimed to record over 50% of its sales coming from tier 2 and below markets.

This spurt of attention to Tier 2 and 3 markets have also been one of the talking points for other ecommerce players like Shopclues and Snapdeal.

Further, apart from the above players, online marketplaces such as Snapdeal, Shopclues, Craftsvilla, and KartRocket, among others, are also working closely with local artisans, thereby increasing awareness of online shopping even in remote and far-flung areas. Snapdeal claims to work with 100K SMBs on its platform.

One of the company which has played offline and online card well is Paytm Mall. With growing reach of digital payments app Paytm, the company’s ecommerce arm Paytm Mall has also aligned with several small businesses to enable their listing and delivery to nearby places via its platform.

Along the same lines, a Hyderabad-based digital enabler of small and medium-sized businesses is NowFloats. The company enables SMEs to create their website online and then sell their products across the country. The company is a testament to reports that 27% of the online SMEs use ecommerce.

The same report said that although SMEs in India may or may not have an online presence, 43% participate in online sales in India.

As Grozip takes forward its lessons to become the next household ecommerce name of Tier 2 markets, Jack Ma’s lessons of sticking with the team’s vision and long-term growth plans will come in handy for this startup which is not afraid of dreaming big.