Gujarat Startups On The Rise: How The Business-Friendly State Is Tapping Its Tech Potential

Gujarat Startups On The Rise: How The Business-Friendly State Is Tapping Its Tech Potential 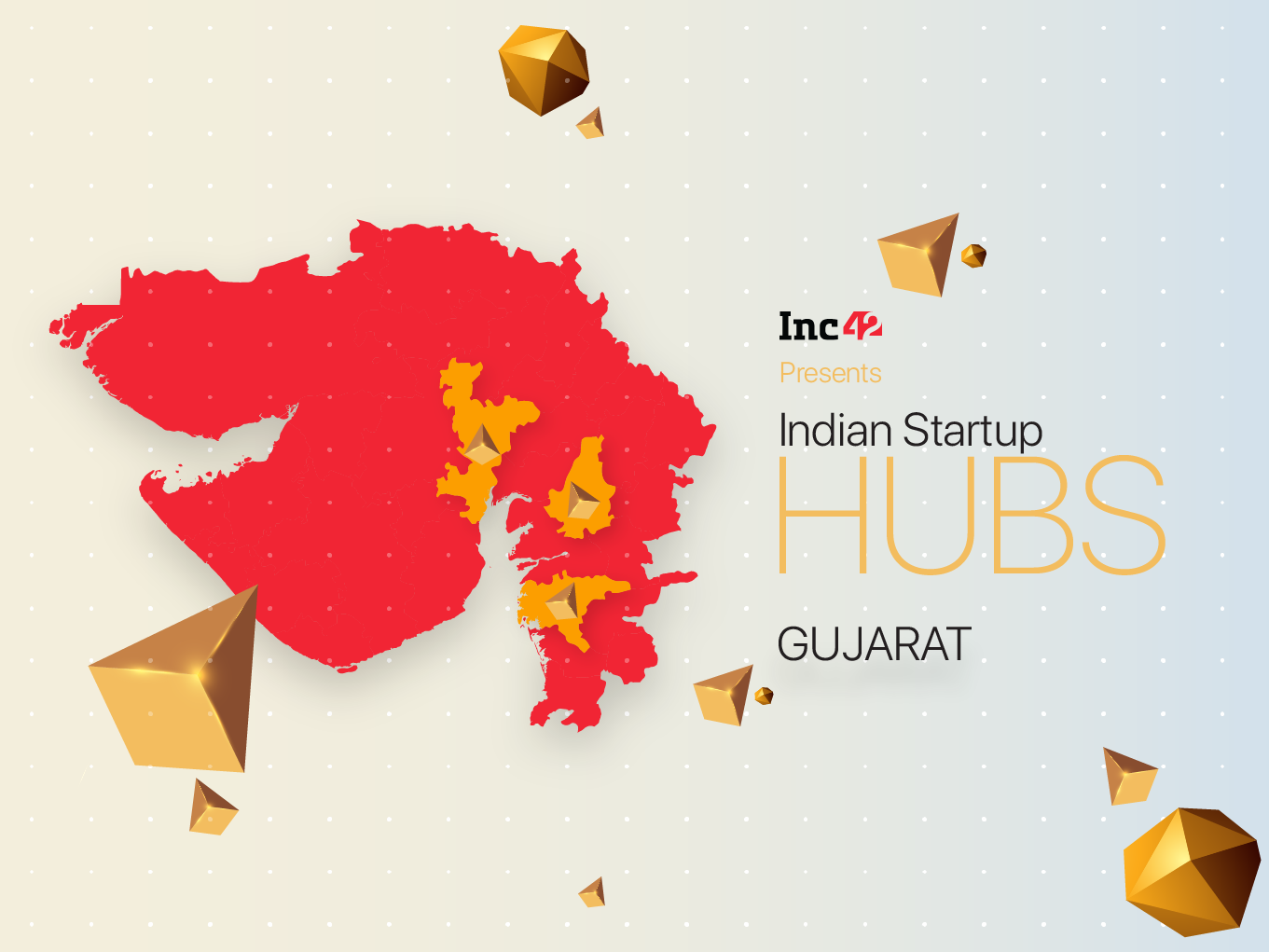 According to DataLabs by Inc42, in 2018 the state had more than 5K startups

The people of Gujarat and Gujaratis in particular have earned a reputation as being shrewd businessmen, even to the point that it has become a cultural stereotype. But the land of Mahatma Gandhi has always come up with unique ways to overcome problems — just like the great man did with that charkha (a yarn-spinning wheel).

Even among technology innovations, Gujarat has stood out among its peers. The state has was named ‘Best Performer’ in DPIIT’s 2018 state-wise ranking for the startup ecosystem. According to DataLabs by Inc42, in 2018, over 5K startups were active in Gujarat, with over $135 Mn poured in funding over the course of the year in these startups. In 2019 so far (Q3 2019), over $14 Mn has been invested in startups from Gujarat.

The rising investor interest is thanks to Gujarat being the first state to have an official IT and Electronics Policy and also being the first to implement Student Startup and Innovation Policy (SSIP). With esteemed educational institutions such as IIM-Ahmedabad, National Institute Of Design (Vadodara), as well as the Gujarat Technological University (GTU) which was the first to adopt SSIP under the Gujarat University Startup and Entrepreneurship Council (GUSEC) led by director Hiranmay Mahanta and founder Rahul Bagchandani.

This support system for startups has many layers starting with the government and going up to private incubators, educational institutions and individuals. Here is a quick overview of the state of the startup ecosystem in Gujarat:

Government’s Efforts For The State’s Startups

The government of Gujarat has been very proactive in its initiatives and measures to help startups grow and scale-up. The official IT and Electronics Policy brought in in 2016 will be updated in 2021. It has the following objectives:

In line with this policy, the Gujarat government claimed to have provided financial assistance of over $3.2 Mn to more than 175 startups in the span of 2016-2018. Still, the goal is a long way away.

In addition to that, the state implemented the first-ever Student Startup and Innovation Policy in 2017 to promote the young innovators from the state, which seeks to:

Gujarat is also blessed with an ecosystem of private enablers such as incubators, accelerators and coworking spaces. Cities such as Ahmedabad, Vadodara and Surat have many universities providing student innovators with incubator facilities and young talent. Adding to that are organisations such as TiE and eChai, that are providing startups with the right networking platforms.

Apart from these organisations are the contributions of the state’s incubators, accelerators and coworking spaces.

Gujarat’s institutions are the true enablers of its startup ecosystem. Home to universities such as Ahmedabad University, IIM-A, MICA, NID, NIFT and more gives the state advantages of having promising talent as well as a culture of innovation. Here are some of the most prominent names in Gujarat in this category:

The investor community in Gujarat has taken active participation in helping innovative ideas from the state in the growth journey. The state is equipped not only with many investing organisations but also angel investors, a few amongst these are:

In addition to angel funds, Gujarat is also home to many angel investors actively looking to invest in startups at an early stage. Thanks to GAIN and other investing organisations many individuals have gained prominence as angel investors and active mentors in the startup community in the state. Some of them are:

Gujarat Startups In The Spotlight

The efforts of the enabler community coupled with the government’s push for entrepreneurship and innovation has resulted in many startups hitting the big time in Gujarat.

Names such as Lendingkart and Infibeam have also been identified as soonicorns or startups that are on track to hit a $1 Bn valuation in the next couple of years.

Despite the interest from the ecosystem enablers and active measures from the government, the Gujarat Startup ecosystem is still far behind the likes of Karnataka Delhi and Maharashtra.

One of the many reasons for this is the focus on traditional businesses rather than tech, which is slowly changing. Cities such as Surat which earned prominence for textile manufacturing and Ahmedabad which is an education hub have become home to many innovative startups, which is helping close the gap when it comes to startups.

Some industry stakeholders told Inc42 that the lack of corporate establishment and industry participation in technology ventures is also holding back innovation. “One thing which is definitely lacking is the corporate or industry participation in the startup ecosystem. Government has done its bit, they have worked on the policies, they have created a pipeline, but there are very limited industries in Gujarat which have explored the startup ecosystem as one of their initiatives. There needs to be a little more proactive participation from the industry” said Dheeraj Bhojwani, executive director, TiE Ahmedabad.