The Mumbai-based payments bank is looking to raise INR 1,300 Cr through its IPO.

It is backed by marquee investors such as Blackstone, ICICI Prudential, Bharat Petroleum and IFC, amongst others

Fino has raised close to $100 Mn over multiple funding rounds

As per the filings, the issue will consist of an issue of fresh shares worth INR 300 Cr as well as an offer-for-sale component of up to 15,602,999 equity shares by Fino PayTech. The offer for sale portion also includes up to INR 3 Cr for subscription by eligible employees.

The payments bank is backed by marquee investors such as Blackstone, ICICI Group, Bharat Petroleum and IFC, among other investors. Fino PayTech along with its nominees holds an aggregate of 78,014,996 equity shares, comprising 100% of the pre-offer issued, subscribed and paid up equity share capital of the payments bank.

Let’s look at the shareholding structure of Fino PayTech that was incorporated on June 15, 2006. 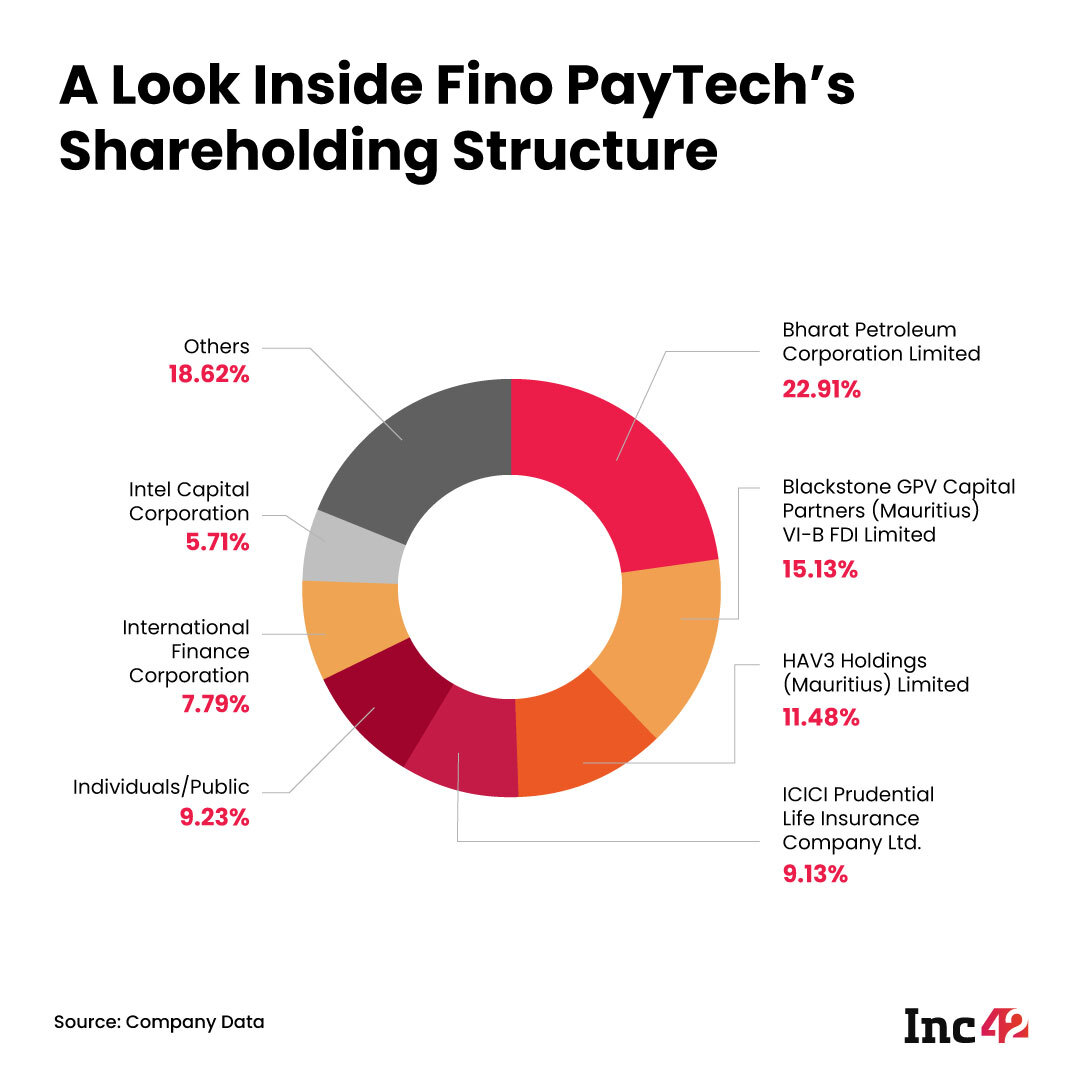 Bharat Petroleum Corporation Limited (BPCL), one of the country’s leading public sector undertakings, is the largest stakeholder in Fino Paytech with a shareholding of 22.91%, followed by Blackstone, HAV 3 Holdings, ICICI Prudential and others.

Starting its payments operation in 2017,  Fino Payments Bank (FBCL) turned profitable in FY21 reporting INR 20.4 Cr in profits and a total income of INR 791 Cr, up 14% on a year-on-year basis. However, the company could not rein in its expenses completely in FY21 — the total expenditure increased by 6.5% to INR 770 Cr, compared to INR 723 Cr in FY20 and INR 433.5 Cr in FY19. The bank processed and facilitated more than 434 Mn transactions having a gross transaction value of INR 1.32 Lakh Cr in FY21.

Fino competes with other similar payment banks operated by India Post, Bharti Airtel, Paytm, NSDL and Reliance Jio. Fino uses a phygital model or assisted digital model to drive scale in the rural and semi-urban regions. Its digital kiosk acts as a last-mile service point in the underpenetrated regions of the country. Customers can visit local banking touchpoints, instead of looking for bank branches, for assisted digital banking services, such as new account opening, deposit, withdrawal, money transfer and utility bill payments.

The payments bank is headed by Rishi Gupta, who is the chief executive officer and managing director of Fino Payments Bank and has received a remuneration of INR 3.04 Cr in FY21.