With 4 Unicorns And $2.2 Bn In Investments, Healthtech Funding Shoots Up

With 4 Unicorns And $2.2 Bn In Investments, Healthtech Funding Shoots Up

There were 3,548 active startups in the healthtech space in 2021, accounting for 8.9% of the startup world that comprises 39,960 companies

Online pharmacy cornered $726 Mn, or 33%, of the total funding the healthtech sector attracted in 2021

The healthcare infrastructure is woefully inadequate in India. The Covid-19 pandemic brutally exposed the miserable conditions. As the second wave hit in March last year, the infrastructure, whatever minimal it was, collapsed in no time. All the available healthcare facilities were swamped with patients. Hospitals ran out of beds. ICUs were crammed. Even make-shift hospitals could not take the load. Ventilators were far and few between. Oxymeter was scantily available. Ambulance services were inaccessible even in cities. Even paracetamol was scarce. That a large number of Covid patients died at hospital gates without getting oxygen support tells a tale.

Startups in the healthtech space gained prominence in 2021 as they aimed to fill the yawning gap in this sector and bring in innovations. Online pharmacy, for instance, caught the attention of consumers as well as investors. With health consciousness improving in the aftermath of Covid-19, fitness and wellness startups too hogged the limelight last year. Healthcare at home service, etc. is another segment that found many takers.

Artificial intelligence has opened an entirely new vista.  Its use is being explored across the spectrum – from diagnosis and treatment to drug discovery and clinical trials.

With the digital economy attracting global and domestic investors, the Indian startup ecosystem closed the year 2021 with $42 Bn inflows. Healthtech was one sector that got a big push even as the Covid scare cast a shadow throughout the year. The startups in this sector received $2.2 Bn in funding across 131 deals, Inc42 data shows. For the huge potential it has, the healthtech space minted four unicorns in 2021, announcing the sector’s coming of age.

It is a different story that ecommerce (10.6 Bn), fintech ($8 Bn), edtech ($4.7 Bn) outshone healthtech in terms of funding. According to Arun Natarajan, Founder, Venture Intelligence, healthtech is considered a safe bet but returns to investors are not as high as is in the case of fintech and ecommerce sectors. This explains low funding in healthtech startups compared with ecommerce or fintech. 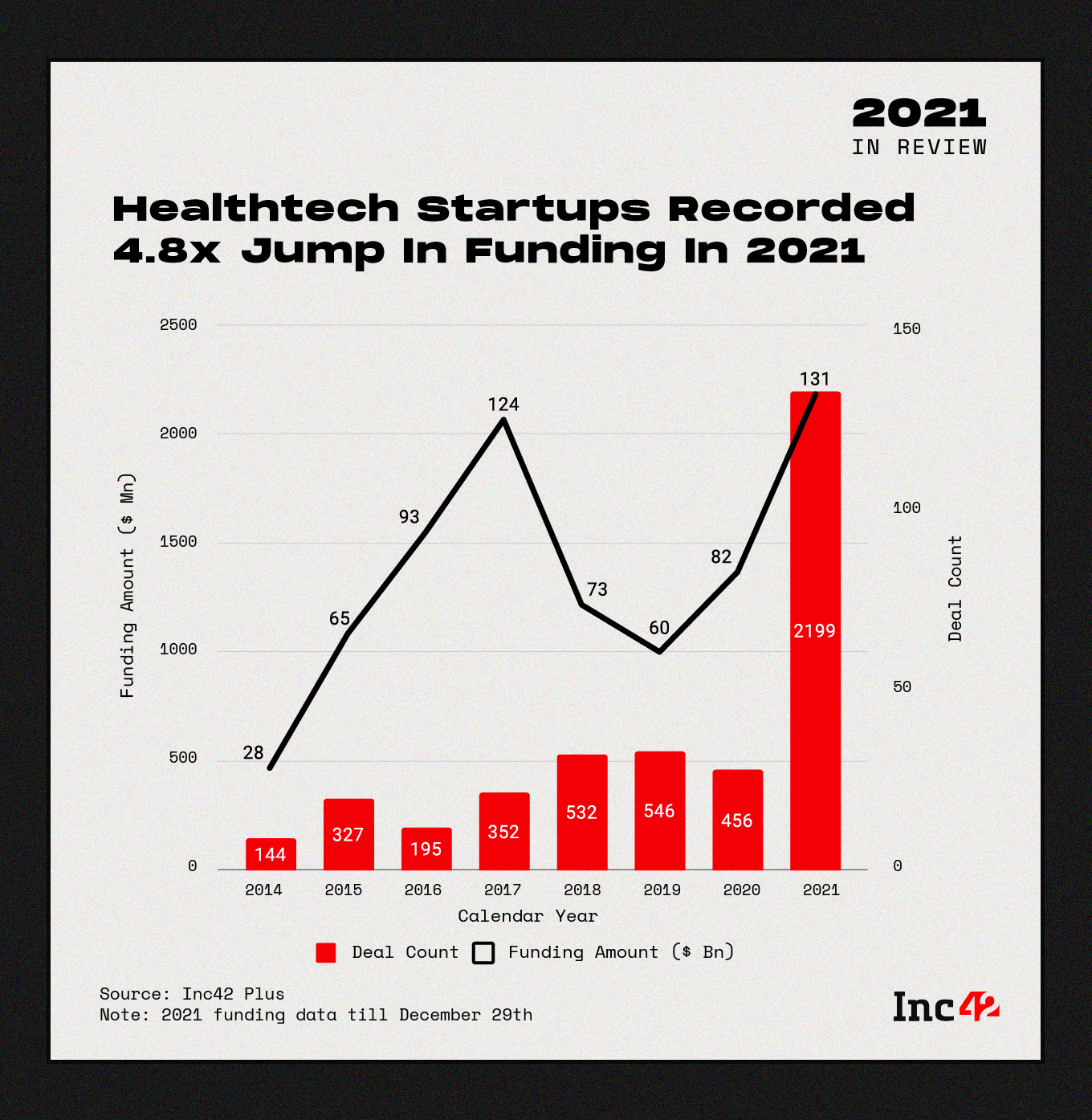 The ills plaguing the healthcare sector are many. Abysmally low government spending on healthcare, poor doctor-patient ratio,  ill-equipped hospitals, insufficient number of labs and diagnostic facilities, lack of access to hospitals, absence of medical records of patients…. the list is long.

The public spending on healthcare, as a percentage of GDP, was a mere 1.2% before finance minister Nirmala Sitharaman effected a huge increase in the budget last year.

Astute investors see good opportunities in this under-developed market. Look at this projection: the healthtech market in India is estimated to grow at 27% CAGR to $21.3 Bn by 2025 and enjoy a share of over 3% of the global market. Healthtech is, of course, a recession-proof sector, said Natarajan, adding that it was not considered a hot investment destination by venture capitalists till a few years ago. “Who would have thought of a Serum Institute or Bharat Biotech,” he wondered.

The gestation period is long and by the nature of the business, the whole cycle is longer. But healthtech always got a look-in when the going was tough in the IT sector. The pandemic, however, changed all that perception and there were 3,548 active startups in the healthtech space in 2021, accounting for 8.9% of the startup world that comprises 39,960 companies.

As battling Covid became the top-most priority, a slew of blockchain startups came up with novel methods for tracing and testing that were pivotal in the battle against the pandemic. Quillhash, Hipla, Aiisma, Tagbox, Yosync, MacAppStudio are a few to name. Founders of startups like Bounce, Vokal and Urban Company collaborated to create Quarantine app (Q-app) as well.

Portea extended Oxygen support and supplies cylinders and concentrators for patients who are recommended to have oxygen.

Navia Life Care offered video consultation, and the service is currently used by thousands of doctors across the country. The company has curated a panel of Covid-19 specialists for patients trying to find specialist doctors for treatment.

Navia, MFine and several other startups too offered similar suites of services.

Online Pharmacy Is The Leader By A Good Distance

Fitness & wellness and healthcare analytics figured among the top sub-sectors in 2021 but it was online pharmacy that saw the most action during the year. Online pharmacy cornered $726 Mn, or 33%, of the $2.2 Bn that the sector attracted in 2021.

Online pharmacy got a big boost in the aftermath of the pandemic which warranted observing social distancing and other norms. They made access to medicines easier in the tough times of Covid and became an instant hit among consumers. Quick home delivery and prescription validation from licensed pharmacists added to their reliability and credibility. 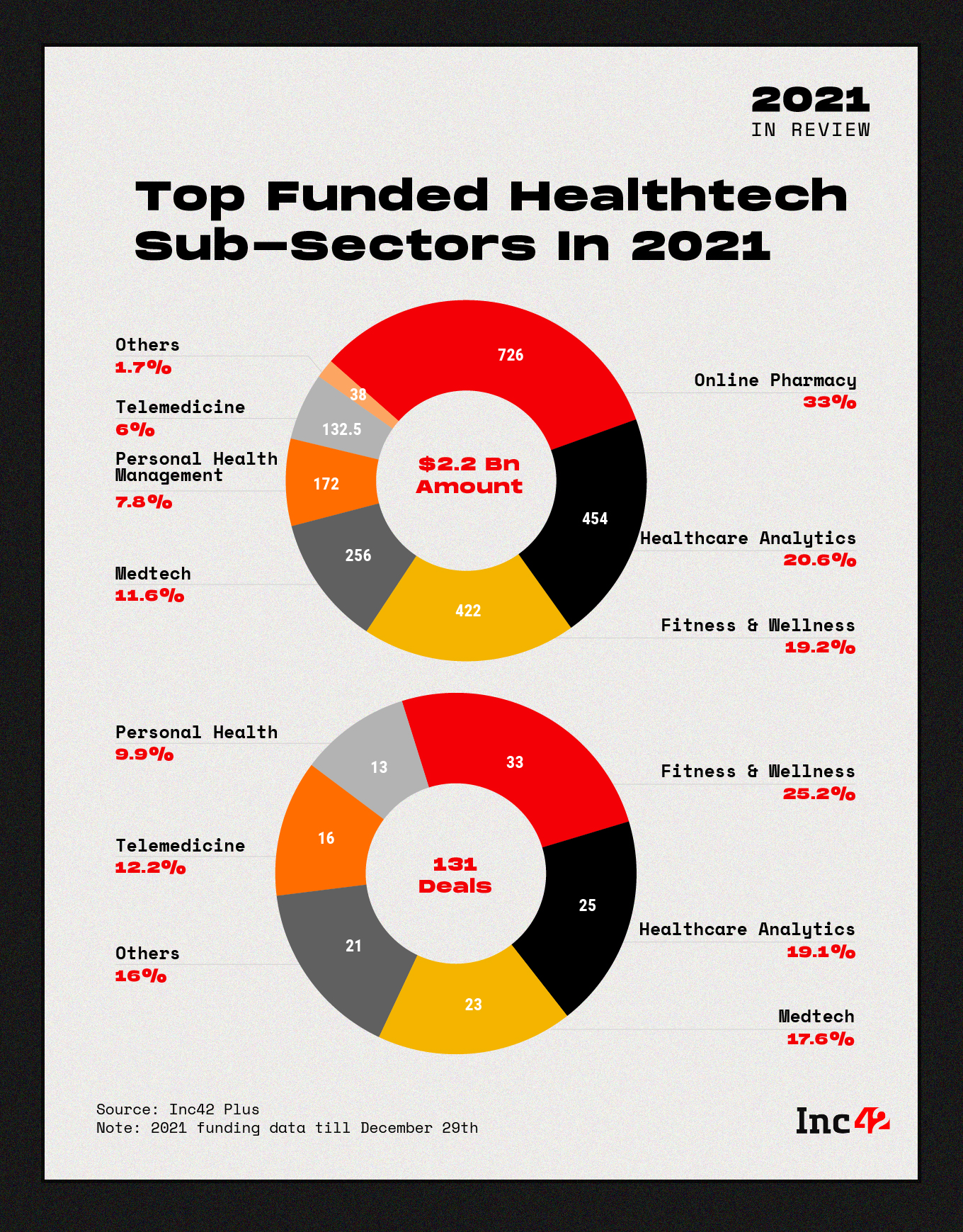 Natarajan while pointing out the emergence speciality investors in healthtech said mega funding would go to those in the services segment.

The challenge in medtech is the long gestation period – the long time for creation, testing and then validation.

Fitness and wellness accounted for the highest number of funding deals at 33. Healthcare analytics witnessed 25 deals, while Medtech closed 23 deals.

The fitness and wellness segment was buoyed as preventive healthcare is gaining further momentum. As more people are taking to yoga and gym, startups in this space are confident of a brighter future. “Pharmacy-health hybrid looks very savvy,” said Natarajan.

Telemedicine billed as the next big opportunity, however, recorded a lacklustre year. While it attracted $132.5 Mn in funding, the number of deals was high at 16, indicating small deal sizes. The relatively tepid show by telemedicine segment comes at a time when the government is projecting India as a global hub for healthcare services. The segment is forecast to touch $5.4 Bn by 2025.

Birth of 4 Unicorns In Healthtech Space in 2021

Innovaccer earned the distinction of first healthtech unicorn, but it took a relatively longer time frame of seven years for the startup to turn into a unicorn with a valuation of $1.9 Bn. While it took Pharmeasy ($1.5 Bn) six years, Pristyn Care surpassed the $1 Bn valuation mark ($1.3 Bn) in just three years. Curefit also took five years ($1.5 Bn).

Execution is the play and sustaining the momentum will be the key, Natarajan said, adding that it was of course a quick turnaround by Pristyn Care.

Speaking of acquisitions, of the 206 M&As in the startup world in 2021, the healthtech space accounted for only 13 of them. While ecommerce topping the list did not come as a surprise, the edtech sector beat the fintech segment with 31 deals against the latter’s 25.

Pharmeasy buying out Thyrocare for $600 Mn was the biggest acquisition in the sector. Tata Digital buying out 1mg for a reported $230 Mn was another high-profile acquisition during the year.

The Two Game-Changing Plans On The Anvil

Going forward, the government’s ambitious digital health mission and National Health Stack plans could end up as game-changers for startups in the healthtech sector. Increased health consciousness in the aftermath of Covid-19 is another factor that favours healthtech startups.

A robust IT framework for healthcare, big data and digital aggregation of medical records under national health stack and digital health mission are just what the doctor has ordered for the healthtech startups to flourish.