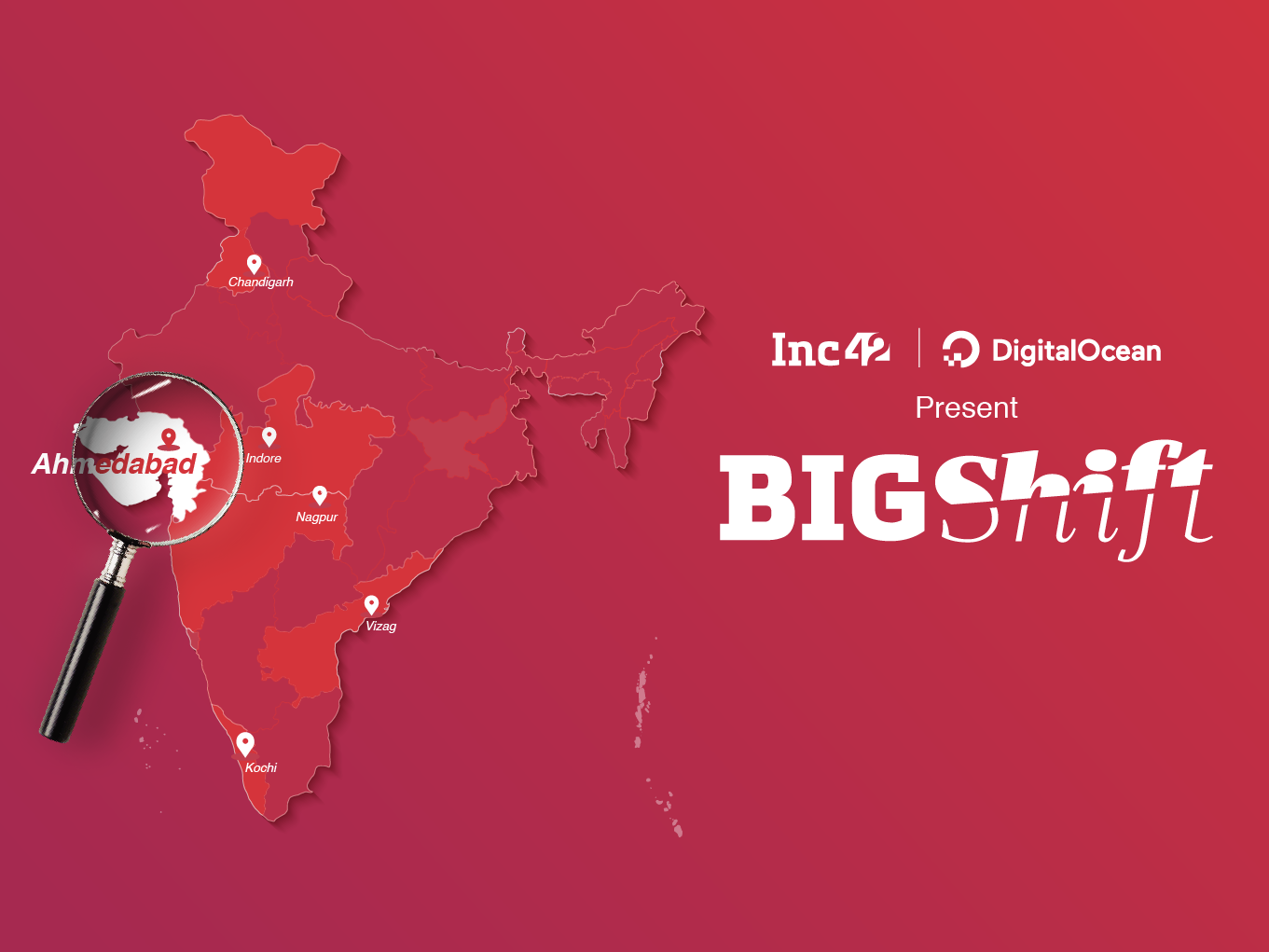 The BIGShift initiative of Inc42 and DigitalOcean will arrive at its fifth destination, Ahmedabad, on September 20 at DevX

Gujarat has many attractions for those looking in from outside. From its food to its cultural heritage to its industries, the state has shown time and again that it’s the right destination for tourists, businesses and communities. Not many might know that Gujarat was the first state to announce IT and Electronics startup policy and then went on to become the first state to have Student Startup and Innovation Policy. So one understands the pull it has on entrepreneurs. Thanks to these policies and efforts to back them, Gujarat leads the DPIIT state-wise startup rankings with the title of ‘Best Performer’.

Beyond policies, the government has shown its support to startups in the state through events such as The Vibrant Gujarat Startup and Technology Summit. These efforts support aspiring entrepreneurs across the country, by providing them with finance, guidance and more.

According to DataLabs by Inc42, the state boasted over 5K startups in 2018. The government of Gujarat has disbursed a total of $3.2 Mn for 175 startups through its state-backed fund from 2016 to 2018. Further to this, it has introduced many policies and schemes to promote the culture of entrepreneurship and strengthen the startup ecosystem. The policies are curated with the aim of helping the establishment of over 2K startups by 2021.

With the progressive efforts of the government, there has been an increase in the number of regional startup hubs in the state. The prominent names include the main cities of Ahmedabad, Vadodara and Surat. Thanks to its proximity to the state’s capital Gandhinagar, Ahmedabad has shown the most potential to become the breakout startup hub in Gujarat. And it also has the advantage of being home to the premier educational institutions in the country — IIM-A, MICA, NID, GTU, NIFT and others.

Amongst the prominent universities in the city, Gujarat Technological University (GTU) was the first to adopt the government’s Student Startup and Innovation Policy (SSIP). Its GTU innovation council nurtures soft skills and the entrepreneurial talents among students to promote innovative ideas and provide support in the startup journey. With incubation and pre-incubation support, the council also furnishes seed funding for startups.

The director of the council, Hiranmay Mahanta and Rahul Bagchandani, the founder of Gujarat University Startup and Entrepreneurship Council (GUSEC) have played a key role in developing the Student Startup Policy of Gujarat, which guides entrepreneurs early on in their journey.

Among the most successful startups from Ahmedabad — and the first name that comes to mind in the context of big-name ventures — is Lendingkart. The fintech company has made a name for itself not only in the city and state but all over India with its approach to digital lending. Its website claims to have a presence in more than 1300 cities, having dispersed over 60K loans and with more than 55K SME clients.

Other prominent names here include Nepra Resource Management, which is a waste management company and has named its brand, ‘Let’s Recycle’. Responsible for over 950 waste pickers in Ahmedabad, it was visited by global social funds and investment agencies in 2014 for a closer look at the startup’s sustainable and economical business model.

Beardo, a men’s grooming brand that has earned fame in the city, is also among the prominent names in the startup world in India. It has seen the keen interest of the homegrown FMCG company, Marico. Marico is planning to acquire Beardo by March 2020.

And then, of course, there’s Menstrupedia. Founded in 2014, this content startup uses the comic book format to educate girls, women and men about menstruation and is looking to create a positive impact on menstrual hygiene. Currently, over 6K schools, 120 NGOs and 2.5 lakh girls have learned and opened up about menstruation through these comic books, it has also been translated into 16 languages and has expanded to 20 different countries.

To provide the necessary push to this motivated and determined ecosystem, Inc42 has partnered with DigitalOcean for its BIGShift initiative and has Ahmedabad as its next destination after Chandigarh, Nagpur, Kochi and Indore. In Ahmedabad, the event aims to focus on the development in the city’s startup ecosystem and connect early-stage founders, budding startups and investors with each other as well as other ecosystem stakeholders. BIGShift is coming to Ahmedabad on September 20 and will be held at DevX.

What Makes It An Emerging Startup Ecosystem?

According to StartupBlink data, Ahmedabad stands at the 7th position in India based on the strength of its local startup ecosystem, and 146th globally. From 2014 to the first quarter of 2019, over 56 startups received funding in Ahmedabad, with the total amount crossing $417 Mn, shows the secondary research by DataLabs. There are many enablers who have contributed to the growth that Ahmedabad has shown in the Indian startup ecosystem over the years.

When it comes to incubators, Ahmedabad is one of the leading hubs in the country. Its startups have benefitted from the availability of a robust community of incubators. CIIE, set up in 2002 by IIMA, in association with the Gujarat government and the DST (Department of Science And Technology) is the most prominent name in this regard. In 2018, it boasted of having seed-funded over a hundred startups, training over 500 ventures and mentoring over 5K ideas.

Others on the list are CrAdLE–Centre for Advancing and Launching Enterprises. Promoted by Entrepreneurship Development Institute of India (EDII) and supported by DST, this is a technology incubator and offers mentorship to innovative tech-based startups in the city. Joining these leading names are organisations such as government-backed icreate (International Centre for Entrepreneurship and Technology), VentureStudio, established by Ahmedabad University in collaboration with Stanford University–Centre for Design Research, the MICA-EDC operated MICA Incubator which has a specific focus on strategic marketing and communications sector and others.

With most of the incubators providing coworking spaces to startups, there has been a rise in the number of coworking spaces in the city. According to DataLabs by Inc42, the city boasts of over 29 coworking spaces currently. Out of these DevX, which also offers accelerator services besides workspaces, and GUSEC (Gujarat University Startup And Entrepreneurship Council), which also acts as an incubator and accelerator are the most prominent names. Other notable coworking options include The Address, Uncubate, and Paragraph.

Adding to this is a network of interested and active investors in the city, both individuals and organisations. Pavan Bakeri from Bakeri Engineering and Infrastructure Limited has been making investments through the Ahmedabad Angel Network and takes a keen interest in the startups of the city. With him are names such as Sunil Parekh, founder of Gujarat Angels, and Chirag Patel, founding charter member, TiE Ahmedabad. Parekh is also an active mentor for many companies such as Zydus-Cadila Healthcare.

Organisations working alongside them in this category such as Gujarat Angels are dedicated to early-stage ideas and entrepreneurs both — which will be celebrated at BIGShift Ahmedabad — as well as Gujarat Venture Finance Limited, an autonomous board managed venture finance company.

Apart from all these incubators, accelerators, investors and more, organisations such as eChai, TiE Ahmedabad and Headstart with the aim to help the startup ecosystem in the city, host many entrepreneurial programs curated for the networking and boost of the startups.

Ahmedabad is the fifth city in Inc42’s six-city tour of BIGShift. So far BIGShift has seen overwhelming turnout from startups and ecosystem stakeholders. Starting in Chandigarh, BIGShift has travelled to central India (Nagpur), then further south (Kochi) and then back up to Indore. With huge participation from startups, a constant flow of innovative ideas from early-stage startups and entrepreneurs, BIGShift has shown off the exciting work being done by Indian Tier 2 cities. Considering the number of applications already flowing in, BIGShift Ahmedabad is set to be magnitudes bigger than its predecessors.

The event will be held on September 20 at DevX in Ahmedabad. The speakers for the event include names such as Yagnesh Sanghrajka, CFO, 100X.VC, Aditi Gupta of Menstrupedia, and Mohan Ram, APAC partnerships manager, DigitalOcean.

The highlight of the evening will be the BIGShift Pitch which will give five startups from Ahmedabad an opportunity to showcase their innovative ideas and business models to a jury consisting of industry stalwarts. They will receive incentives such as a direct entry into DigitalOcean’s Hatch Program which offers infrastructure credits, priority support, training and access to the startup community.

BIGShift Pitch is an initiative that strives to provide early-stage startups with a platform to showcase their business proposition, models and products in front of the stalwarts from the startup community from each location. Any early-stage startup based in Ahmedabad can apply to showcase their business proposition at the event.