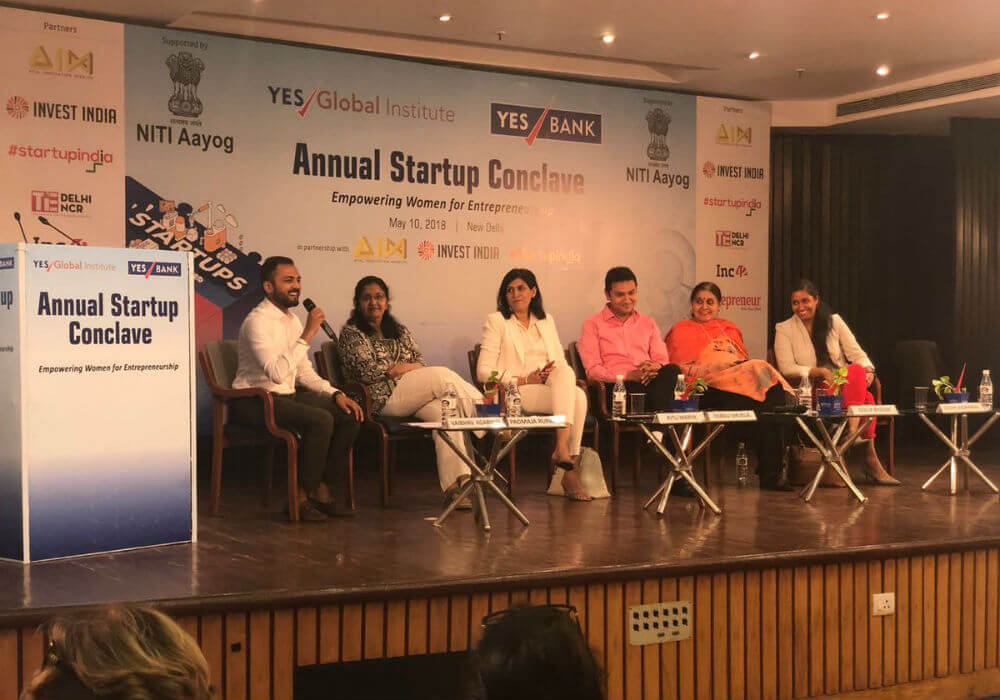 “The percentage of the women entrepreneurs who have completed the lifecycle of entrepreneurship (in India) is a small fraction,” opined Padmaja Ruparel, president of the Indian Angel Network (IAN). She added that Meena Ganesh was one of the rare entrepreneurs she could think of who’ve gone through the entire cycle.

Although women entrepreneurs are trickling into the startup ecosystem of India in slightly larger numbers, this in Padmaja’s view, is an important factor that needs to change.

“These women have to go through a complete lifecycle of entrepreneurship: starting a venture, raising money, exiting it, giving in to healthy returns,” she said. Until this changes, the ratio of investments in female- and male-led ventures won’t change, and this topic will continue to dominate any discussion on women entrepreneurs,” she said.

Padmaja was speaking at the 2018 Annual Startup Conclave by Yes Bank on the topic of ‘Navigating the VC Landscape’ and the session was moderated by Vaibhav Agarwal, founder and CEO of Inc42.

The VC landscape is a tough terrain for women entrepreneurs to navigate, one that desperately needs smoothing, and women could do with all the help they can get in this regard. The panel discussion attempted at gaining a better understanding of why there is there a dearth of women investors, how they can  create scalable businesses, and also how they can bring consumer businesses under the lens of investors and try to leverage technology at the same time.

The panelists included Ritu Marya, editor-in-chief of Entrepreneur Media (India) and former editor-in-chief of Franchise India, Manu Shukla, a project officer in the IT department of the Government of Rajasthan, Dolly Bhasin, director of Incuspaze Coworking, and Nidhi Agarwal, EIR of YourNest Venture Capital.

Here are the key insights from the talk.

Does Gender Matter To Investors?

When entrepreneurs go on the stage to pitch, does it really matter whether the entrepreneur is a man or woman? Does the nature of the business dictate whether a man or a woman can handle it better? Ruparel thinks these very questions are  presumptuous in nature.

“I think, for a large part of the VC and angel investors community, it is really the person who matters; it doesn’t matter what the gender is; rather what matters is, does the person understands the problem? Has he or she put an innovative product? Can they scale it? Can they make revenues? Can they create a company? I think it’s very-very gender agnostic thinking that happens,” she said.

But having said this, she added that “gender biases hasn’t failed” when it comes to entrepreneurship.

Nidhi shared her experience in this context. “Pretty much everyone in my captive was male. From that point of view, some of the largest validation we received as a company and I as an entrepreneur — be it a validation, licensing or something else — they were all male validations,” she said.

While women continue to face certain biases from investors, the number of women in the workforce has gradually increased in the industry. Dolly, who has been observing the industry for nearly three decades, vouches for this welcome change.

In fact, some companies have gone to great lengths to create gender parity in their workforces by mandating hiring of a minimum stipulated number of women.

But this initiative started as a story of necessity, said Ritu, drawing from her experience of growing the franchise industry, “Nobody believed that the franchise ecosystem could grow. So, the men didn’t really join us initially. We had to then convince young women to join us and see the power of franchising. It has grown now.”

Today, thanks to this necessity, women are not only occupying the lower and middle ranks in companies, but are also making their presence in the senior management.

Ritu added, “There was a time in India when there was a male bias; even the man in the house wouldn’t want to see the woman working. I am happy to share that this is almost finishing — at least in urban cities.”

Speaking of women leading the entrepreneurship battle for their kind, Manu gave the example of Vasundhara Raje, the Hon’ble Chief Minister of Rajasthan, saying that she was behind the success of many businesses in the state today.

“There’s a woman behind every startup in Rajasthan — and this the chief Minister. In Rajasthan, the experience has been phenomenal because when we initiated the startup promotion, our own idea was that we are going to do anything that a startup requires. That’s disruptive; that’s what she did,” said Manu.

These insights came through during the Annual Startup Conclave organised by Yes Bank on May 10, 2017. The event saw the participation of Ramanan Ramanathan, Mission Director — Atal Innovation Mission, Government of India, Deepak Bagla (MD & CEO, Invest India), etc. During the Conclave, YES BANK and YES Global Institute announced the launch of Agenda 25×25. A Statement of Intent with iStart Rajasthan and Foundation for Innovation and Technology Transfer (FITT), IIT Delhi to mentor startups was also signed during the event.

The Dearth Of Women Investors In India

One of the most difficult questions the Indian startup ecosystem has to face is: Why is it that despite a flourishing startup ecosystem, there are just a handful of women entrepreneurs and investors? If women’s empowerment and enablement is really happening in the country, as many governments and organisations claim, why isn’t this visible in rising numbers of female investors?

Therefore, the ratio of the number of investors willing to invest in women-led companies as compared to those led by men is naturally lower, she explained. This, according to her, is the reason why there are very few angel investors in the country.

However, in VC ventures outside India, things are different. “In the UK, for example, the number of women angel investors is higher than men,” said Padmaja.

Is Tech The Real Hiccup For Women Entrepreneurs?

The Indian entrepreneurship landscape seems to be driven by different experiences and energy. Investments not only come from VCs or Angels today, the government has also stepped in to help startups. In this context, Manu said that the Rajasthan government is directly in touch with many startups and helps them with various things — from giving them a stage for recognition and exposure to providing funds for scalable businesses.

Padmaja agreed, “Anything you find in India, you will find it in some other countries around the globe. India is a beautiful place to start a venture; think of the gaps and think of the innovation. Are we creating one more app for the top 1% of the population? That day is over. Another Flipkart, another aggregator, another mobile app is not going to impact our lives.”

They added that whether it be IoT or deep tech or consumer products, women entrepreneurs need to leverage technologies. “As an investor, I am not looking for a deeptech company; I am looking for a solution to a problem which exists in a large highscale market. It is great if you do it through IoT, deeptech, or franchising or creating a kiosk. I say: build in India, pilot in India and scale in India,” said Padmaja.

Ritu, meanwhile, wants to see a lot more diversity in funding in the years to come. She is of the opinion that funding series is increasingly becoming restricted to funding for tech-enabled companies.

Manu added, “When we are talking of startup promotions, let us understand very clearly, it is non-mathematics. You cannot bind rules for startup promotions. Every single activity, whatever is happening in the world, is always evolutionary in nature. At the end of the day, what we require is to provide as much as required to the ecosystem altogether. A startup’s success and failure is going to be dependant only and only one parameter — quality.”

This is true. Whether it be tech-based company or a non-tech, consumer-based one, what women entrepreneurs will always have to produce, irrespective of the challenges, is good quality products. And ultimately, in the dark tunnel where she tumbles amid challenges and missing links, the woman entrepreneur will have to find her own way to the see the light of her product.