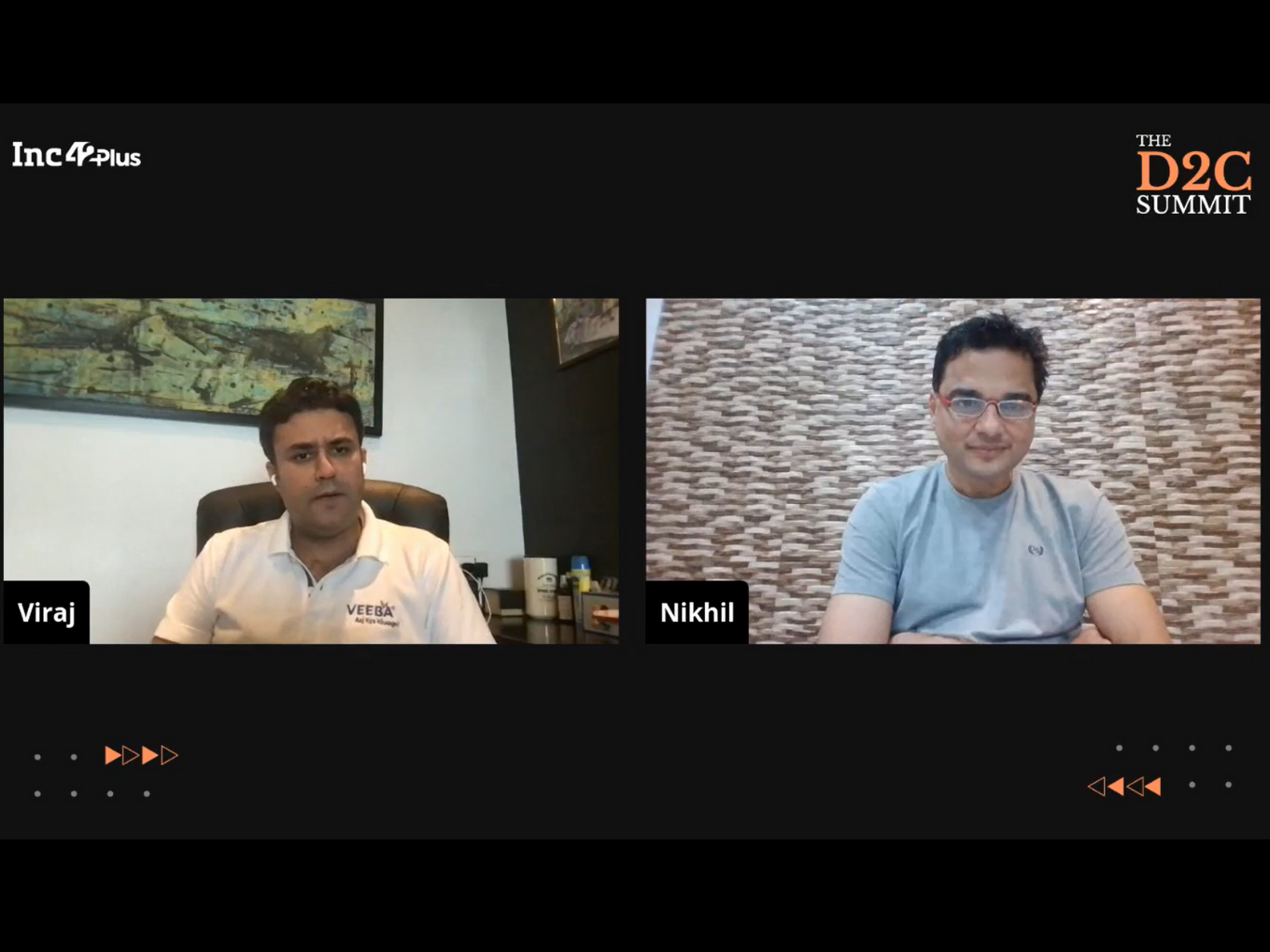 In the initial days of the company, continuously setting targets helps build a culture and motivates the entire team to work hard

Unlike most of its competitors, Veeba entered the B2B market first and ensured a firm footing before starting its retail journey

This article is part of The D2C Summit by Inc42 Plus and Shiprocket, India’s largest D2C and ecommerce conference scheduled for 17th-18th July 2021. Click here to know more.

As the Indian economy struggled to cope with the output gap for nearly a year and a half due to the Covid-19 pandemic, millions of companies saw a massive dip in revenues and a subsequent rise in losses. Physical retail slumped likewise, but as people shifted to online shopping due to its convenience and safety, digital-first direct-to-consumer (D2C) brands across the country managed to grow during lockdowns. Their dedicated websites recorded an 88% rise in consumer demand in 2020 compared to the previous year.

Among the D2C players that grabbed success during the black swan event was Gurugram-based Veeba, a sauce and mayonnaise manufacturer with a prior taste of quick-service and restaurant segments (QSR and FSR, respectively). In fact founder Viraj Bahl had seen a similar crisis in both those segments he said at the recently concluded Inc42 D2C Summit that hosted many founders, experts and enablers from the D2C space.

In a conversation with Nikhil Vora, the founder and CEO of India’s first consumer-focussed VC fund Sixth Sense Ventures, Bahl recalled his past experience with Funfoods, the mistakes he made in his entrepreneurial journey and how he scripted the Veeba story. Here are some key insights from the session.

At first, this may not sound like a brilliant operational strategy, but the crux lies in its execution. Bahl said that setting up frequent revenue targets helped the business grow consistently. Instead of setting up annual goals and targets, the team would be tasked with reaching more frequent targets in a time-bound manner.

What he found even more effective was to club a team reward with a specific target. For instance, if a team can reach its monthly revenue target, its members can take all Saturdays off. Such targets can usually motivate a team collectively as they work towards a common, tangible goal.

“We even had a plan to move into a new and better office when we could hit INR 200 Cr in revenues,” he added.

When Veeba was launched in 2013, its journey was quite different from other legacy consumer brands. Instead of entering the B2C or retail segment, the company forayed into the B2B space to find a firm footing.

Commenting on this unique approach, Bahl said, “I wanted to reach a certain size and revenue goal before entering the B2C space as I needed feet on the street to grow my business there, you need people; you need to open depots across the country (to succeed in B2C).”

In spite of his strategy, the company initially found it tough to operate in the B2B space. But, it soon signed sizable contracts with some of the biggest fast-food brands such as  Domino’s Pizza, KFC, and Taco Bell. They soon became Veeba’s anchor clients and currently account for a major chunk of their B2B business.

After building a solid foundation in the B2B segment, Veeba was keen to expand its condiments racks to retail. For a company whose online trade was limited to just 30% of total transactions even during the pandemic, it was, indeed, a critical goal for long-time success in the new normal.

The data derived from the country’s supermarket data was encouraging. “ We found out that many of our customers had purchased two bottles of Veeba products instead of one,” said Bahl. As most FMCG brands expect a consumer to buy a single unit at a time and plan production and distribution accordingly, this new trend was received well by the Veeba team.

But retail is a difficult beast to tame. Previous success triggers can easily backfire, and companies need to fix things at the earliest to avoid market impact. During his session, Bahl came up with an intriguing narrative that underlined this dilemma.

According to the founder, the white product labels on Veeba containers stood in stark contrast with other FMCG brands that usually flaunted their colourful labels and logos. But there was a glitch. Even minor stains and spots on the white labels ruined the look of the products. Hence, the team had to take the time to train packagers and retailers on how to maintain the pristine state.

There was also a bigger problem though. Due to its products’ chick look and feel, most retailers and shopkeepers thought Veeba was a foreign brand and usually kept them in the imported goods section. Bahl said that people would rarely visit those wings or purchase the brands on display, given their prohibitive pricing and the widespread assumption that they were lying there too long and lost the ‘fresh’ value. Veeba saw a drop in sales as its product placement went wrong in those physical stores.

To tackle this ‘perception’ problem, the company came out with newspaper ads where Indian celebs such as Neha Dhupia made people aware that Veeba was a homegrown brand and the products were as fresh as they could be. The strategy worked well, and soon retailers and consumers had the right information about the brand.

Play To Your Strengths

Most companies feel overwhelmed by feedback as it tends to accentuate the negative instead of highlighting the laudatory aspects. According to Bahl, companies must play to their strengths — identify, foster and harness their excellence — to stay ahead and grow. On the other hand, failure to do it can affect a product’s success and may even impact the company’s overall performance. It had even happened to Veeba too.

After making its mark in sauces and spreads, the company launched V-Nourish, a set of milk additives and supplementary drinks. Bahl said he had put effort into the product and it was an instant success in the initial months. The reason: Doctors were also prescribing it to their patients.

But when the lockdowns were imposed to contain the pandemic, OPDs, or outpatient departments, also closed as well, leading to a drastic dip in doctors’ referrals. “ Within a week, our V-Nourish revenues hit zero,” said Bahl.

Could the brand have done something different to prevent it?

As a company, Veeba’s strengths lay in its products and extensive distribution, said Bahl. In the case of V-Nourish, the company cracked the product side, and it led to a rise in referrals by medical practitioners. However, the company mainly depended on that referral-based system to drive sales and completely ignored its other strength — the power of its distribution. As a result, the initial success of V-Nourish hit rock bottom, one week into the lockdown.

Be Frugal And Patient

Bahl is careful about spending and insists that early-stage startups should refrain from spending all available money. Being frugal is one of the most critical lessons that startups should learn and adopt at the earliest. However, he claimed to have observed a reverse trend in this respect and seen new companies bet big on marketing.

Currently, the most common misconception across the startup ecosystem is that marketing expenditure is directly proportional to sales. So, companies spend crores in marketing, hoping to reap massive returns in sales.

Bahl thinks otherwise. According to him, the rewards of marketing come slowly and require patience. He feels this idea of patience should be extended to company building, too because building a startup takes time, at least a minimum of three years, says Bahl. Rushing through this process could be fatal to the startup, he added. V-Nourish faced a similar problem as he rushed the entire process.

What will be the road ahead for Veeba? The founder said the company would continue to operate in its current sector in the food space and stick to its strengths to thrive. While he is fascinated by the baking industry and sees it as a space to be disrupted, Bahl claims that he doesn’t see Veeba foraying into that industry. He also urges other players from the same and across different sectors to start adopting Indian methods and ingredients. For a country that has imported food products for most parts of its history, making it in India should be the way to go for growth and self-reliance.

This article is part of The D2C Summit by Inc42 Plus and Shiprocket, India's largest D2C and ecommerce conference scheduled for 17th-18th July 2021. Supported by WebEngage, Shipway, PayU, Delhivery, MoEngage, Trell, Akamai, Velocity, Gupshup, GreenHonchos, Vue, Razorpay, and AWS, the conference will bring together 1,000+ folks at the forefront of India's D2C revolution! Click here to know more.