Ecommerce sector has produced the most number of fastest unicorn

Bengaluru has the highest number of startups in the top 10 fastest unicorns of the country, while Mensa Brands took the least amount of time to become a unicorn

India’s startup ecosystem reached an important milestone in the first week of May (2nd May) this year, minting its 100th unicorn. The watershed moment came when Bengaluru-headquartered neobank startup Open raised $50 Mn from Mumbai-based investment fund IIFL to cross the billion-dollar mark in valuation.

The three-figure unicorn count was impressive, to say the least, and was celebrated by all stakeholders – entrepreneurs, investors and policymakers. Union ministers Piyush Goyal and Anurag Thakur lauded the efforts of the young entrepreneurs who have collectively taken the country to new heights.

India, the third-largest startup ecosystem globally, is home to nearly 55K startups. But even half a decade ago, billion-dollar companies did not emerge as quickly as it happens now.

A look at the top 10 fastest Indian unicorns (time taken to reach $1 Bn valuation since inception) will help us decode if the speed at which startups are turning unicorns is getting faster now and if there will be a deluge of billion-dollar startups in the near future.

Which Are India’s Top 10 Fastest Unicorns?

In November 2021, when D2C roll-up startups were grabbing the headlines every other day with the announcement of brand acquisitions, the then six-month-old Mensa Brands stunned everyone as it entered the coveted unicorn club by raising $135 Mn in a Series B round. Led by former Myntra CEO Ananth Narayanan, Mensa is backed by Alpha Wave Ventures, Falcon Edge, Accel Partners and Tiger Global, among others.

D2C brand aggregator GlobalBees emerged second in the race, turning into a unicorn in just seven months from its inception, taking only a month longer than Mensa Brands to cross the billion-dollar valuation mark.

GlobalBees, a Thrasio-style venture of the IPO-bound omnichannel brand FirstCry, raised a Series B round of $111 Mn in December 2021 to enter the unicorn club.

Fintech startup CredAvenue was the third-fastest Indian unicorn, taking around 1.5 years to achieve the feat. The startup raised $137 Mn from Insight Partners, B Capital, Sequoia Capital, LightSpeed and TVS Capital to cross the billion-dollar valuation.

We at Inc42 broke the news of two of the top three fastest startups entering the unicorn club. 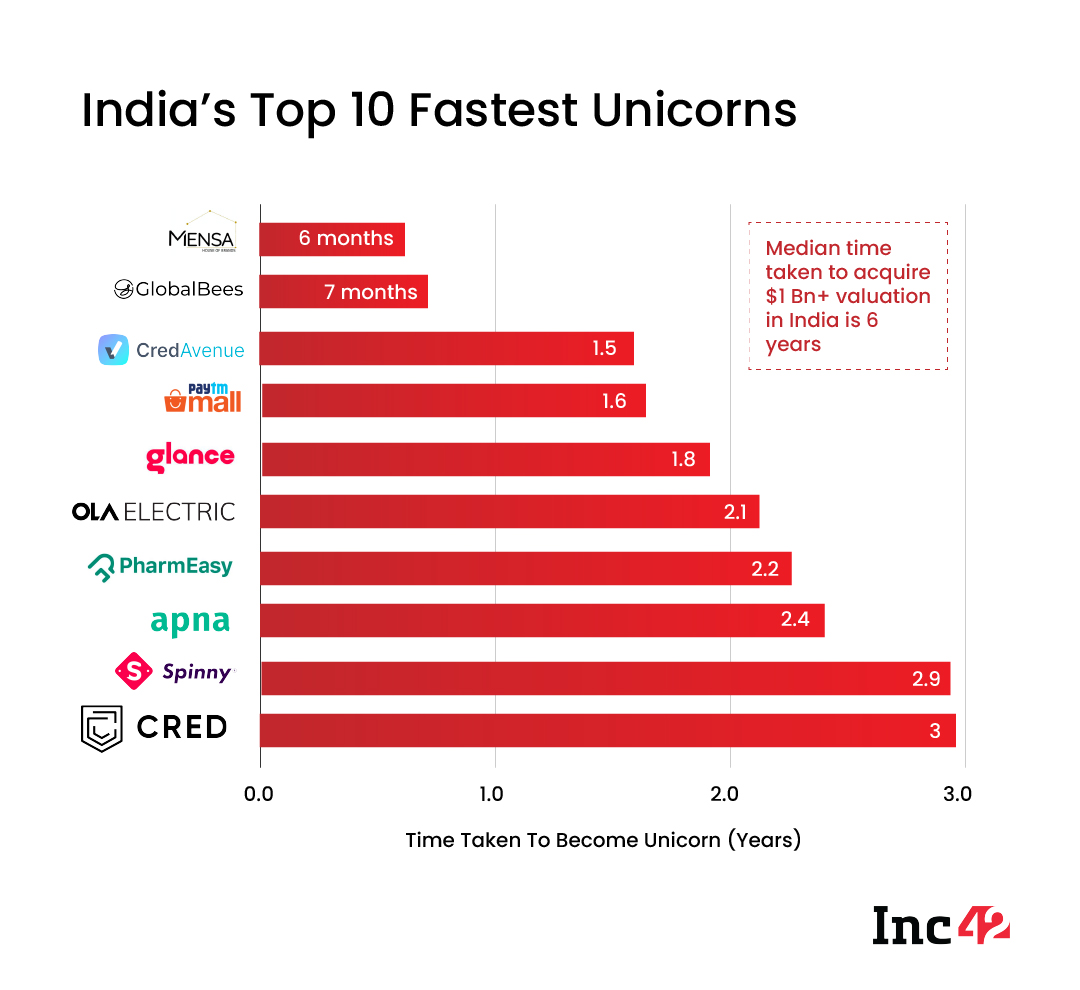 The ecommerce sector in the country is currently at a late-growth stage, thanks to the inception of Flipkart in 2007, followed by the entry of US-giant Amazon along with the availability of cheap data. The emergence of new business models such as D2C, social commerce, B2B commerce, along with the entry of Thrasio-style ventures, have further propelled the sector. The onset of the pandemic further saw millions of individuals becoming first-time users of various e-commerce platforms.

This chain of events helped ecommerce platforms gain investors’ confidence. As per an Inc42 Plus analysis, funding in the ecommerce sector jumped 1,000% in 2021 as compared to 2020. The sector raised around $10.7 Bn in 2021. The report further pointed out that the ecommerce market would cross the $400 Bn mark by 2030.

The sector leads the way when it comes to the top 10 fastest unicorns in India. Of the 10 unicorns, four belong to the ecommerce sector – GlobalBees, Mensa Brands, Paytm Mall, and PharmEasy.

The country’s booming fintech space, which is estimated to reach a market size of a trillion dollars by 2025, has produced two of the country’s top 10 fastest unicorns. While CredAvenue crossed the billion-dollar valuation mark within 1.5 years of its inception, Kunal Shah-led CRED took almost double the time i.e. three years to enter the club. 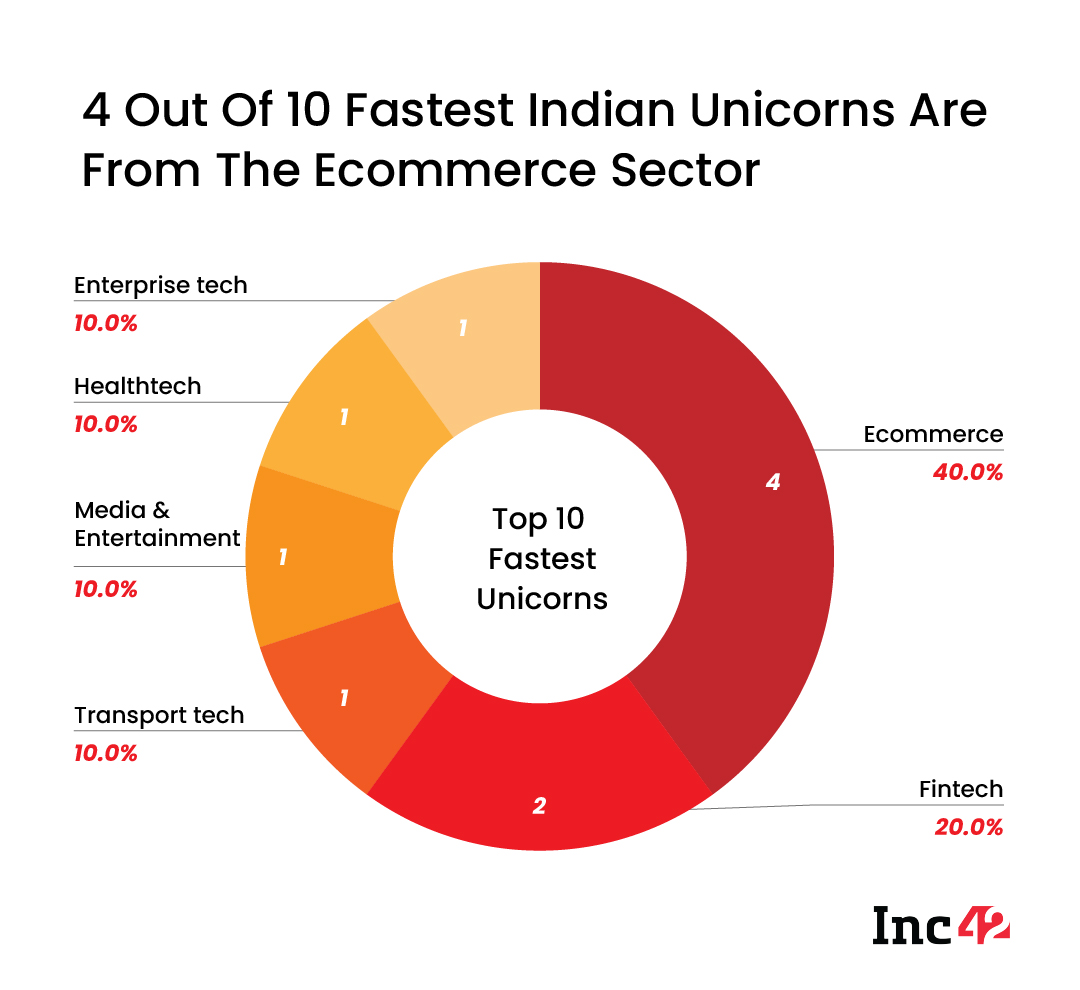 Bengaluru: The Heart Of Unicorns?

Bengaluru, the city which is often referred to as the startup capital of India as it houses most of the country’s startups, has also produced five of the top 10 fastest unicorns. The Delhi-NCR region, which is seeing a significant rise in startups, has produced three of the top 10 fastest unicorns. Paytm Mall, Spinny, and GlobalBees are based in Delhi-NCR. 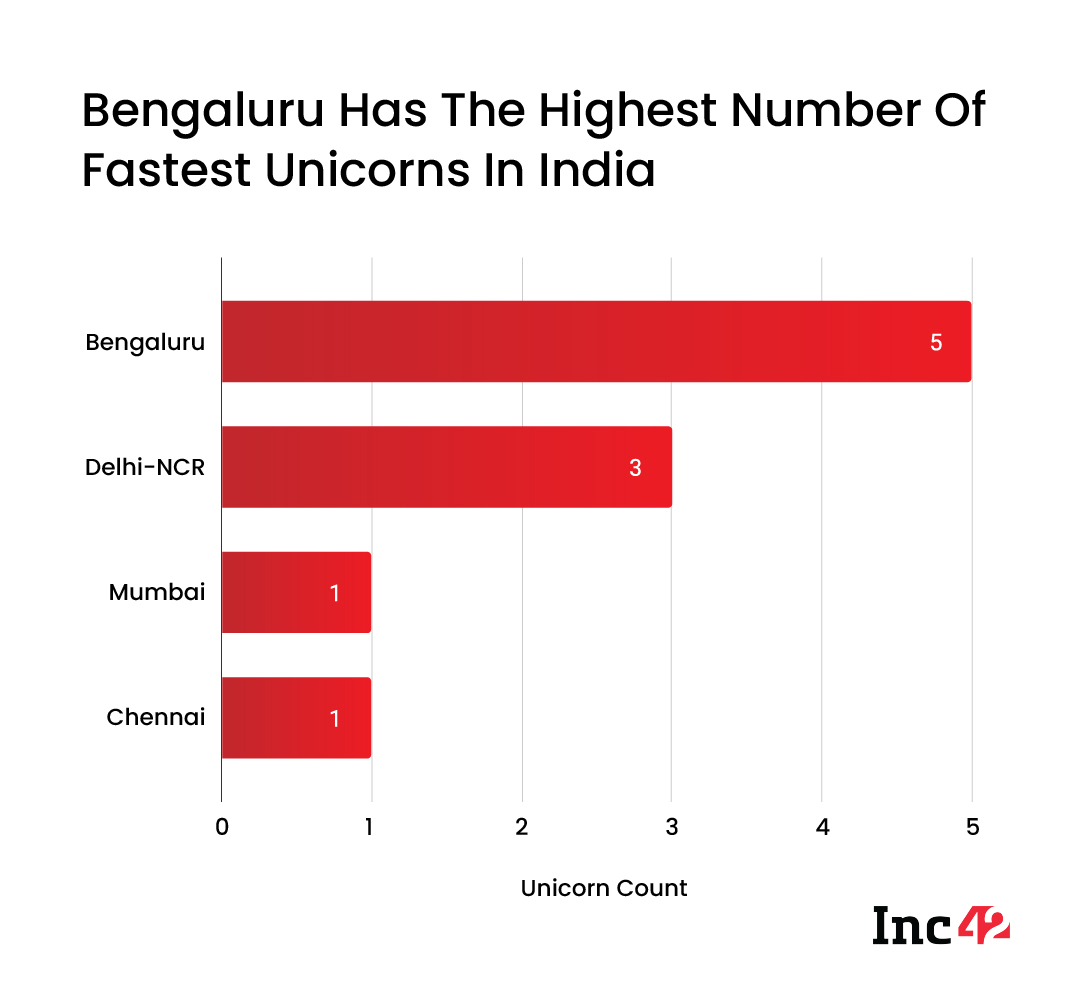 It goes without saying that to achieve a valuation of a billion dollars within a few years, or in some cases within months, huge amounts of capital is needed to be pumped in. Based on the business model, the market, and also on the founders, some of the startups are raising funds from domestic and international investors every six or 12 months. 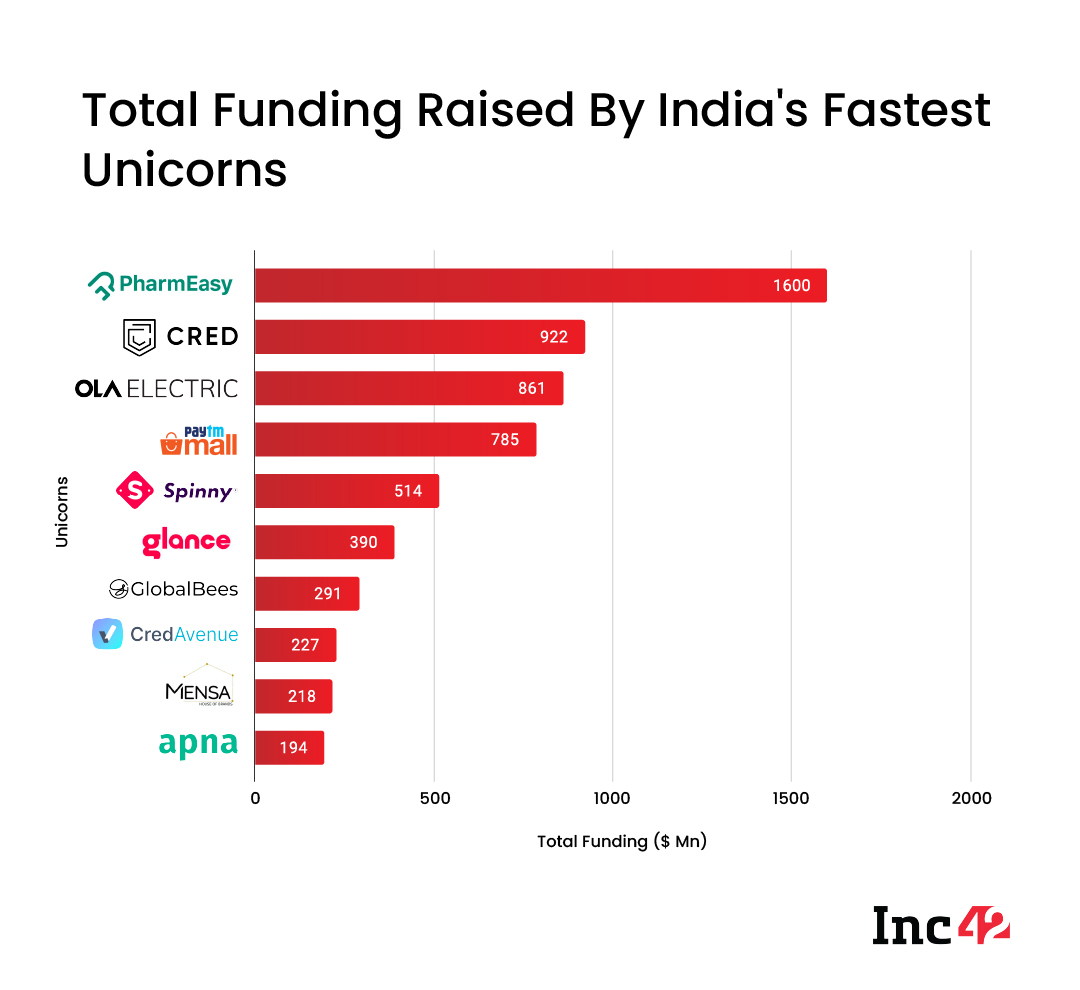 Kunal Shah’s CRED, often known for its out-of-the-box television commercials during IPL, has received a total investment of $922 Mn. It counts Dragoneer Investments, GIC, Tiger Global, Insight Partners, among others, as its investors. The startup is currently valued at $6.5 Bn.

Bhavish Agarwal-led Ola Electric, which is currently receiving a lot of criticism for some of its malfunctioning electric two-wheelers, is third on the list having received a total funding of $861 Mn over the years. The startup counts marquee names such as Tekne Private Ventures, Alpine Opportunity Fund, Edelweiss, SoftBank, among its investors.