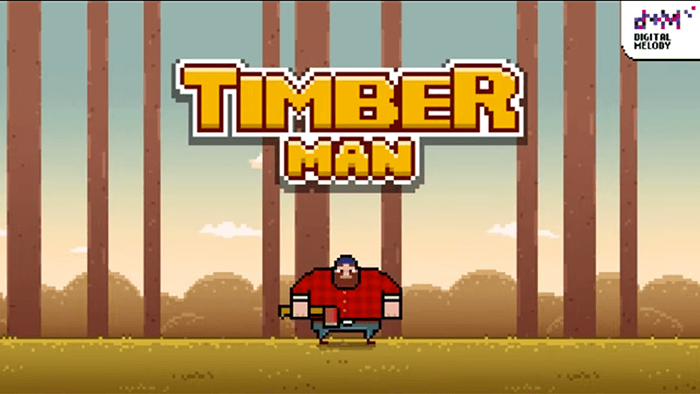 There’s a new game in town, which has taken the app world by storm – Timberman!

I was just planning on going to bed early today. I flipped open my iPad to read an eBook and opened up the App Store in parallel to update some of the many apps craving for attention. And there it was, featured in the Editor’s Pick section, a simple and harmless looking game that reminded me, for some reason, of Flappy Bird. Might just have been because of the 8-bit look and feel of the thumbnail.

Anyways so i went ahead and checked out the app’s stats, a typical habit for people like me who, well, just want to keep their devices bloat-free. And that’s when i noticed, it had over 2.5 million downloads already in under 2 months. My plans of sleeping early went right out of the window. Here i am 2 hours later, after forcing myself to delete the app, writing this post.

This just brought back memories of my Flappy Bird obsession days. Timberman’s gameplay nails the recipe for addictiveness in a smartphone game.

So the game’s quite simple, Tap left or Tap right, that’s all. Ok there’s a little more – beware of those branches! Here’s a neat little preview for you:

After a few rounds where you frustratingly die because you can’t tell how close those branches really are to your character, the game clicks. As you get into the rhythm of the game, getting a good run becomes easier but improving your score gets harder. You’re thankful for rounds where the random generator gives you a tree that doesn’t require you to switch sides more than once a second, making you curse your phone when faced with a seemingly impossible run of branches.

According to App Annie, the game now ranks in the top 5 apps overall in more than 20 countries and is the most-downloaded game in eight countries as of yesterday.

According to Paweł Kitajewski, Timberman’s creator, Apple featuring the game as an Editor’s Choice led to the recent spike in downloads, with 1 million of its 2.5 million total downloads taking place in the last three days:

Timberman is free and you can download it on the App Store and Google Play Store. There’s a Golden Edition for those of you who don’t want to see ads every couple of rounds as well.