As part of the digital lending playbook Inc42 Plus has handpicked five emerging startups that stand out in the crowd through their product offerings, distribution models, technology for lending and more.

While NPAs are a real thorn in the sector, startups are helping build non-banking financial data through distribution channels and other transactional data

Paperless loans specific to categories such as MSMEs, freelancers and homes are seeing the most innovation through automation, smart distribution and transparency in approvals

Going through the previous chapters of our lending tech playbook, we have seen the massive impact of the lockdown and the moratorium on digital lenders and NBFCs. But since September, the market is on the recovery track and investor confidence in the lending tech is growing. However, that does not mean that all the demand-supply friction has been solved. Due to the unavailability of data and high risk involved in lending to some business sectors, lenders and digital lending startups have had to revisit a lot of the rules of the game.

Due to the rising pressure of NPAs, banks and NBFCs have shied away from extending any credit to nearly a billion Indians and over 58 Mn MSMEs that do not have adequate credit bureau or business data, despite contributing more than 45% to the GDP. While unsecured loans are still an option, there’s a huge amount of risk and the supply for these loans is also through NBFCs and banks which have tightened their lending criteria.

But startups are still chipping away at the problem. While NPAs are a real thorn in the sector, startups such as Recordent have come up with payment reporting platforms to help build the non-banking financial data through distribution channels, which can be used to create alternative risk models. Similarly, Rupifi has come up with easily accessible embedded loans for micro and small enterprises for short-term periods. Embedded loans are linked to other services that the business may be using on a subscription basis such as accounting software or operational tools.

On the consumer side, Moneyonclick is looking to extend digital loans to lower-middle-income families that are neither tech-savvy and don’t have credit bureau files. Easy Home Finance, is looking to solve the home loan challenges. Under the Pradhan Mantri Awas Yojana, it has enabled a significant number of eligible Indians to borrow affordable houses in different parts of India. According to Habitat and IGH, over 73 Mn Indian families don’t have access to quality homes and home loans typically involve heavy documentation and an opaque approval process.

These are just a few examples of lending tech startups that are making a big impact in the existing market despite the uncertainty. As part of the digital lending playbook Inc42 Plus has handpicked five emerging startups that stand out in the crowd through their product offerings, distribution models, technology for lending and more. 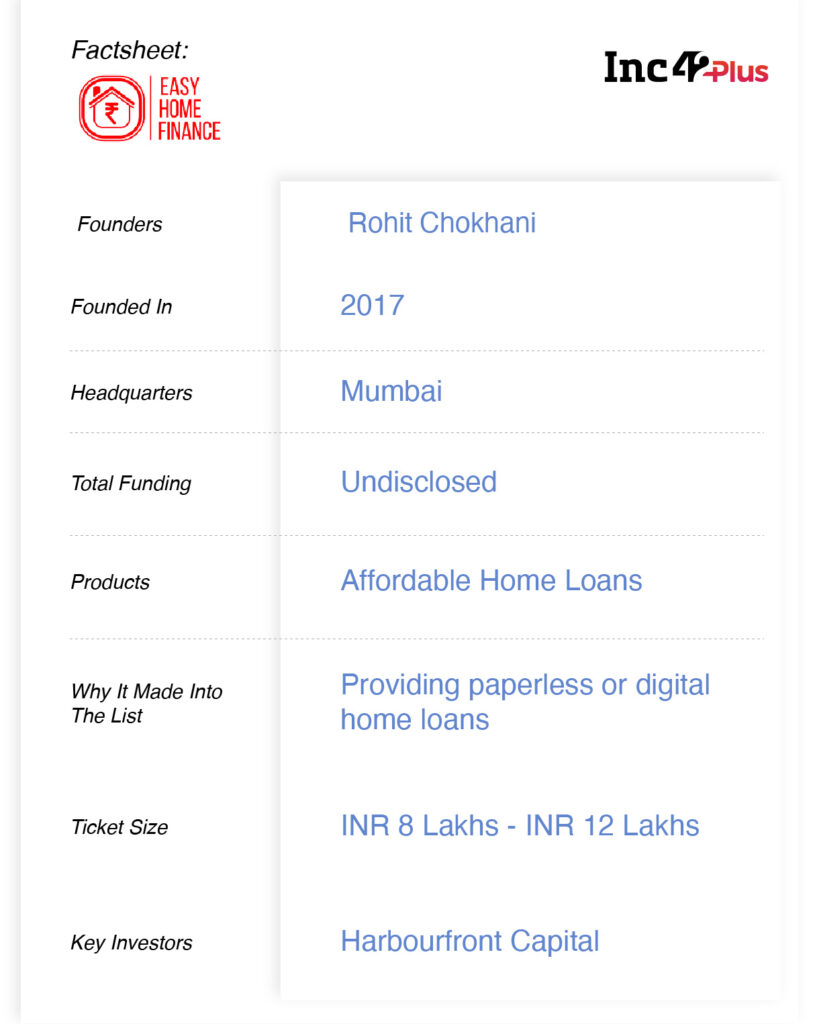 For Rohit Chokhani, one of the biggest problems in India is that a significant number of these families, despite many of them having government jobs. Chokhani’s startup Easy Home Finance is looking to tap this underserved audience that has not been able to get loans from banks for multiple reasons, primarily due to the lack of credit bureau files, the unwillingness of public sector banks due to high operating costs for affordable house loans.

“People are much more serious about paying home loans’ EMIs than paying credit card EMIs. There are instances where people preferred to skip paying their credit cards’ EMIs, yet they paid EMIs of their home loans. The data too proves the point. The NPA in the case of home loans is less than 1%,” said Chokhani.

The founder explained that most of the available home loan instruments in the market today are for the people who have credit bureau files. None of these extends loans to the economically weaker section who needs a loan of INR 8 Lakh to INR 12 Lakhs for their homes, which is relatively a small ticket size in home loans. “This is what we do. A large section of Bharat still does have their homes and thus there is a huge demand for such home loans which rarely anyone looks into,” he added.

Chokhani said there is a section of government employees such as Railways’ class D too have been unable to get home loans for the transferable nature of their jobs. Easy Home Finance does serve to these salaried as well as self-employed people. The company is currently catering to Madhya Pradesh, Chhattisgarh, Gujarat, and Maharashtra and aims to further deepen its presence as well as enter a couple of other states like Delhi in the coming months. 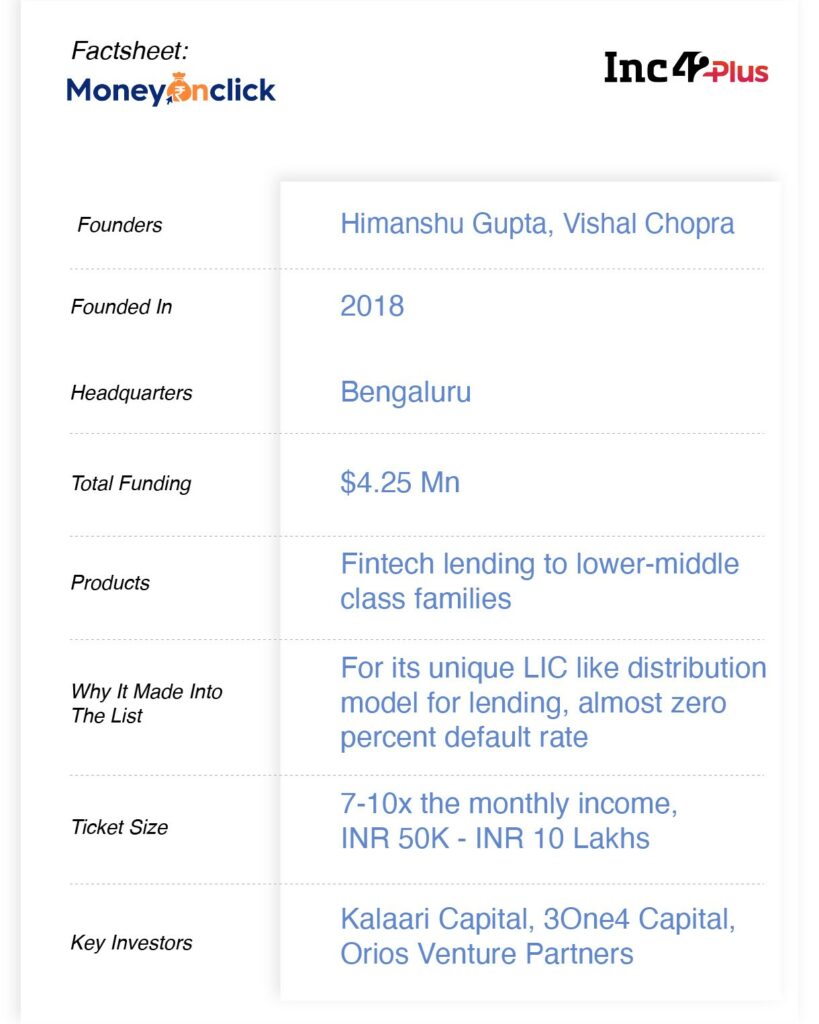 Speaking of what led to the birth of Moneyonclick, CEO Vishal Chopra says it’s simply the lack of access to credit to a majority of Indians. He explained, that most banks, NBFCs have been focussing on cities (Tier 1, 2 and 3), whereas a majority of Indians come from outside these cities.

Chopra claims that just about 64 Mn families in India have access to private banks and maintain a robust credit history. In such a case for every demand raised, there is a slew of suppliable products and solutions. However, for those outside the top layers of India, or around 121 Mn families with monthly income ranging between INR 15K –  INR 50K, access to credit, insurance products is rare. They either take loans from informal players or have to take gold loans where the security deposit is as high as 140% of the loan.

What Moneyonclick sets apart from other lending startups is the distribution model. Providing an example of how Meesho has developed a unique distribution model by bringing housewives into the loop, and how LIC built a huge agent-driven successful model, Chopra said that the company is not hiring full-time employees for the loan disbursal, but is using these agents on a commission basis. These agents could be insurance agents, bank employees or anyone who can sell to underserved families in their personal capacity. Further, to minimise the risk, the loans are given against the entire family income and not to individuals, unlike other companies. While many lending companies have turned their attention to MSMEs, the majority of them are doing transaction-based loans. Rupifi is targetting companies with an annual turnover of less than INR 1.5 Cr and those that do not have consistent transactions, which is why they are not covered by banks, NBFCs and other lenders.

CEO Anubhav Jain said, “We collaborate with marketplaces such as Flipkart and Amazon and ask them to embed our lending solution onto their platform. This gives us access to their transactions and sellers, so their credit offers just a click away.”

Rupifi offers cash flow based credits for seven days to 90 days. While the ticket size could be as large as INR 10 Lakh in some cases, the average ticket size is below INR 1 Lakh. Unlike many other lending startups providing credits to selective MSMEs, Rupifi is sector agnostic.

“We want to solve the problem by reducing the costs of SME lending from the cost of origination to underwriting, which should be low so that process is digital as well,” Rupifi’s Jain explained.

Having built a consumer lending product with Qbera (acquired by InCred in 2020), Jain is familiar with the B2B fintech ecosystem and Rupifi is looking to leverage the government’s Open Credit Enablement Network to improve SME lending. OCEN seeks to provide a common language and platform for lenders and marketplaces to build innovative, financial credit products. 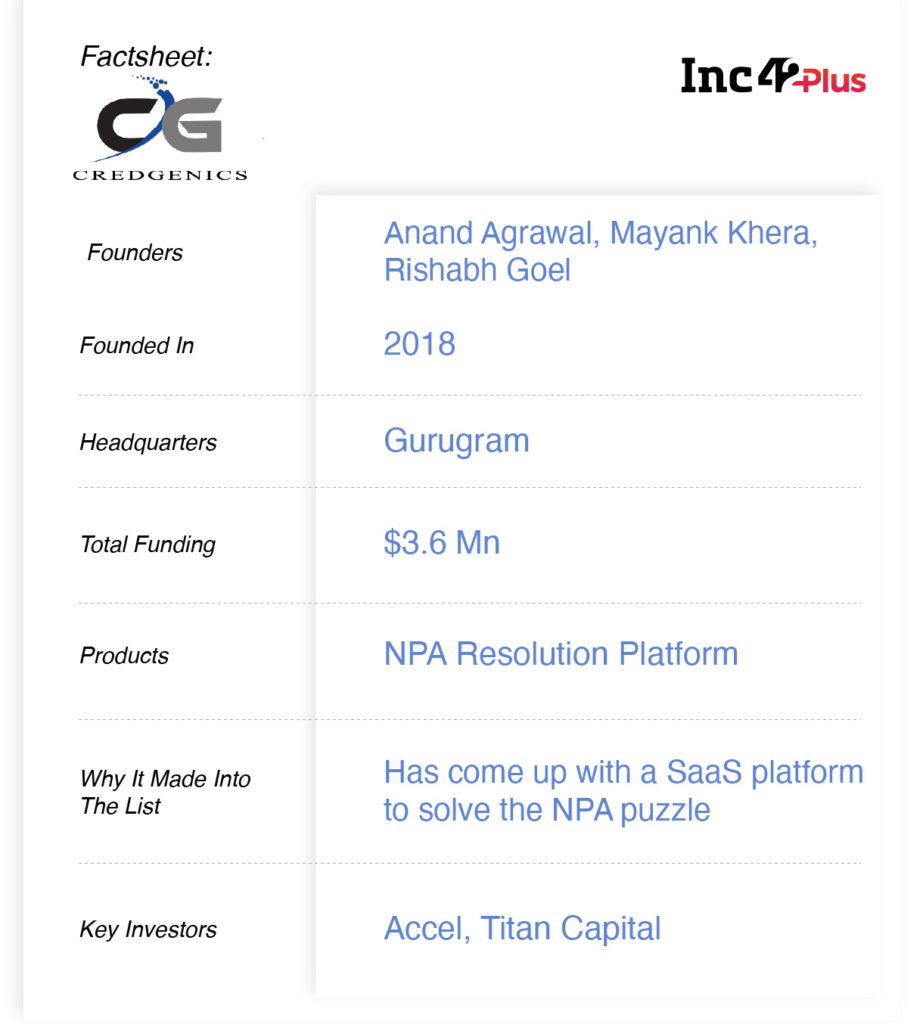 The problem of NPAs is not about to go away anytime soon for digital lenders, but in the meanwhile, they are looking at tech solutions to make loan recoveries smarter and more efficient. Founded in 2018 by Rishabh Goel, Anand Agrawal and Mayank Khera, Credgenics has come up with a SaaS platform for loan recovery management. With the help of a network of independent experts, the company also offers dispute resolution and mediation for a viable settlement between the borrowers and lenders.

With India facing one of the longest historic economic slowdown turned recession, the NPA which currently amounts to INR 10.5 Lakh Cr is estimated to rise by 2x in the next two years. In such a situation, there is a growing demand for recovery platforms.

The company offerings could be divided into two parts: Collection & legal services and SaaS platform. While its collection and legal services consist of API integration for smooth allocation of cases, a bucket of recovery strategies with the help of a pool of advocates for mediation, etc its SaaS platform offers inbuilt communication and payment modules for faster collections and ML-based intelligence to further optimise the collection and so on.

The company claims to achieve a higher and faster resolution rate ranging from 70% – 95%. This is important given the fact that amid consumer spending has dropped significantly, the rate of recovery too has dropped by over 6% in the last few years.

With fresh investments, the company is not only looking to expand its base across the country but is also working on integrating new technologies into its existing platform. The company’s cofounder and CEO Rishabh Goyal said that they are working towards creating a set of large data that would help predict borrowers’ behaviour as well. Also focussing on the recovery aspect of lending, Recordent has come up with solutions that help in creating non-banking data to ease the risk in lending and also assist in loan monitoring and collection of EMI dues.

CEO Winny Patro said that the idea behind Recordent was to solve the issues of late payments. In the case of personal finance, it is the credit bureau file that impacts and the creditworthiness of the particular borrower immediately goes down. As a result, nobody wants to make late payments. However, in the case of MSMEs there is no such file that could force MSMEs to pay their EMIs on time else their creditworthiness would impact.

“With Recordent we are trying to build a similar file for MSMEs, a set of non-banking data that would help lenders to assess their creditworthiness,” Patro said.

Recordent offers a technology-enabled credit and payment reporting platform which can be installed by a set of players including traders, wholesalers, lenders and so on.

Explaining how it works, Patro said, traders and manufacturers can use Recordent payments platform to automatically record whenever their vendor or client makes a payment. In lieu of such a solution, traders would have to manually log in to record the payments. This removes the friction in creation of non-banking financial data for both seller and buyer, that would help lenders not only in loan monitoring purposes but also the creditworthiness assessment.