A Savings Bank Account In 4 Minutes: Inside Fino Payments Bank And Its Quest For 50 Mn Customers In 5 Years

A Savings Bank Account In 4 Minutes: Inside Fino Payments Bank And Its Quest For 50 Mn Customers In 5 Years 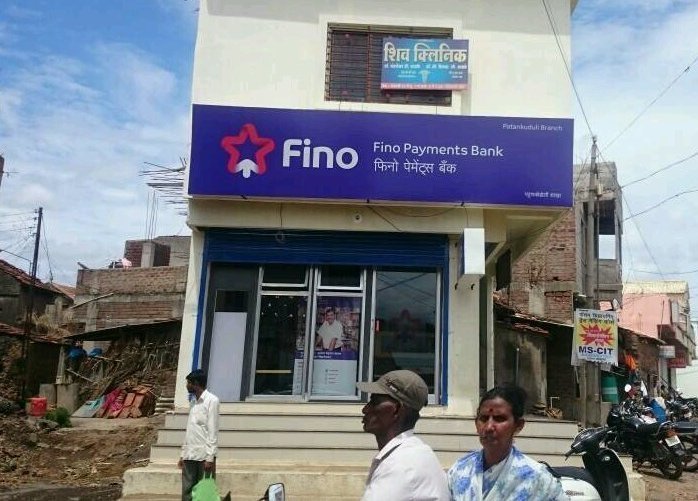 Fino Payments Bank became the fourth payment bank to start operations this year. The bank went live with 410 branches and over 25,000 touch-points on day one itself in the month of July, a number it aims to ramp up to a lakh in the next three to five years. Headed by Rishi Gupta, Managing Director and CEO, the bank will face stiff competition from other payment banks namely Airtel Payment Bank, Paytm Payments Bank and India Post Payments Bank.

Rishi has ambitious plans for the Fino Payments Bank. Besides increasing the number of touch-points to a lakh, he also envisages that the bank’s branch network will also grow from the current 410 to 1,000. On the anvil are plans to soon start rolling out ATMs, offer investments products such as mutual funds in the next quarter, mobilise deposits worth $1.56 Bn (INR10,000 Cr) over the next three years, and hopefully turn profitable by 2020. 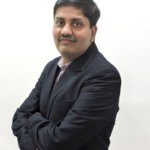 Inc42 caught up with Shailesh Pandey, EVP and CMO Fino Payments Bank to know more about how does the bank aim to attain its lofty ambitions given the challenges of connectivity, awareness about banking, and most important strong competition.

Inc42: How easy or difficult is the process to open an account in Fino Payments bank?

Shailesh Pandey: It is a simple process with minimum documentation required. There is no need to even fill a form. By doing eKYC through Aadhaar and PAN and because of a paperless process, an account can be opened in four minutes. Also, we are currently offering over the counter physical debit cards and soon we will also provide virtual debit cards. We won’t be offering third-party credit cards right now. More so, customer can generate his debit card pin in a few hours and doesn’t have to wait for a week to arrive in courier. The debit card will have annual maintenance fee like any other debit card. The bank has kept its interest rate at 4%. 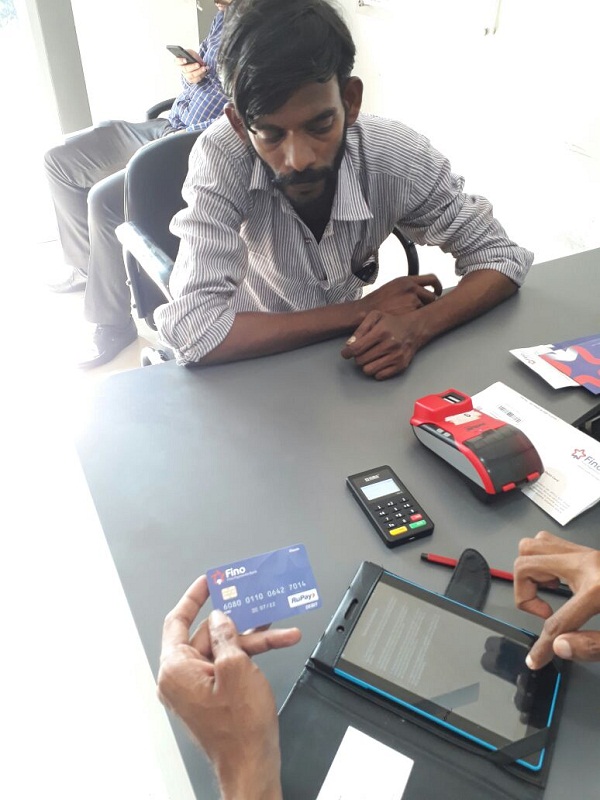 Inc42: Who are your target customers? And where all can they find Fino branches?

Shailesh Pandey: The mass market segment or so to say the under-banked segment is our target audience. So consumers with income levels between $1.56K (INR1 Lakh) to $7.8K (INR 5 Lakh) will be our audience. We have launched across 14 states covering 126 districts with 410 branches and 25000 touch points. These include AP, Bihar, Telangana, Delhi, Gujarat, Haryana, HP, Karnataka, Maharashtra, Punjab, Rajasthan, UP, Uttarakhand and MP. Currently, from these 410 branches, 65% of the branches are in rural areas and 35% are in urban areas.

The branches are normally about 200 sq ft in size and have a branch manager along with two-three employees. In rural areas, we have opened branches along with our existing NBFC business, so they do both payment bank business and lending business. 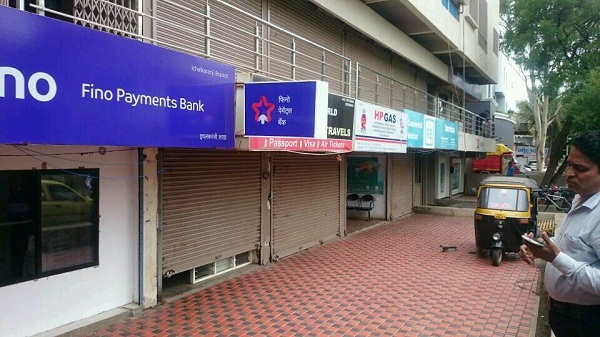 Inc42: What will the partnership with ICICI Bank Ltd brings to the table? What kind of products can we expect from this tie-up?

Shailesh Pandey: As you know, the ICICI Group (ICICI Bank, ICICI Prudential and ICICI Lombard) have a stake in Fino Payments Bank. But apart from being an investor, ICICI is also our knowledge partner, which means we will spend time with them to understand banking system and processes, risk, treasury and business management. ICICI Bank will also help us with infrastructure. For instance, some of our branches will have ICICI Bank ATMs. We will be offering fixed deposits and home loans from ICICI Bank.

The group will also provide insurance products for our customers. We are already offering Insurance (Life Insurance from ICICI Pru and Exide) and General (ICICI Lombard). These products will be launched in the next six months. Our customers can use ICICI Bank ATMs and the charges will be similar as per the Reserve Bank of India’s guidelines, just like any other bank’s ATM charges.

Inc42: You have also tied up with Bharat Petroleum Corp. Ltd (BPCL). What does that partnership mean for Fino customers?

Shailesh Pandey: BPCL is our one of the investors and also infrastructure partner and it is trying to digitise the entire payment process. So Fino payments bank will be using their outlets as our banking touch points. Overall, BPCL has 20,000 outlets across the country. We will convert some of these outlets as Fino Payments Bank branches and the rest as banking points. The services from these outlets would include opening bank accounts, cash-in and cash-out, bill payments, recharges, insurance, remittance and etc.

Inc42: When it comes to investments, are you planning to offer third-party mutual funds to your banking customers?

Shailesh Pandey: As I mentioned, we are already offering Insurance products such as pure term insurance and endowment products. This customer segment prefers insurance over mutual funds. So as of now, we haven’t started offering mutual funds. We are first trying to understand the market for this product. Then we will start testing the product in a month and it is likely to be launched in about three months.

Inc42: How does Fino payments bank aim to differentiate itself from other three payment banks?

Shailesh Pandey: See we have past experience in the sector as we have been in the similar business from the last 10 years owing to our lending business. We have a wide reach, we launched with 410 branches, which no other bank has for now and 25,000 touch points across 14 States. We have strategic partnerships with ICICI Bank and BPCL which will further aid our fast scaling. Also, we are following a phygital model, which includes both banking at branches but digital interfaces like opening an account in four minutes. Then again by using completely paperless banking, using biometrics across platforms – mobile, tablet, PC etc, we aim to stand apart.

You have to understand that none of these banks are working on developing a savings bank transaction model. They are opening accounts for transactions and then they hope to build the savings. We instead are focussing on building up savings accounts first and that will lead to transaction as an outcome. 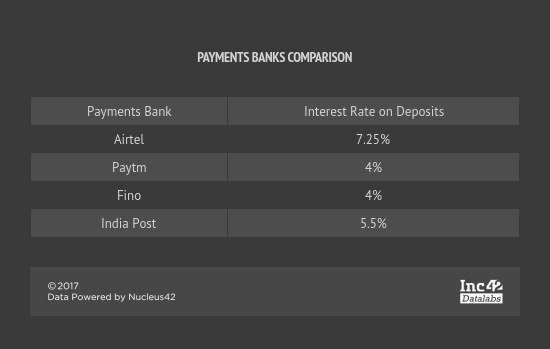 Inc42: What are your expansion plans for the next five years?

Shailesh Pandey: The bank has a target of mobilising deposits worth $1.56 Bn (INR10,000 Cr) over the next three to five years by acquiring about 50 million customers through a network of 1000 branches and 100,000 touchpoints. Our main objective is to be the first profitable payments bank by 2020. For right now, we won’t be adding branches but only stabilising the operations of the payments bank. We have a wallet which is live, mobile app going live this month end, very soon we will be going live with UPI. So we have a clear route road map for providing all possible payments options to the consumers.

Inc42: What is the growth potential for Payments Banks in India?

Shailesh Pandey: The journey of payments bank has just begun but the signs have been encouraging. There is a huge gap in banking access and providing quality service. And payments banks will work towards addressing this gap. A large section of unbanked/ underbanked customers will come into the formal banking system for the first time and there’s a huge opportunity here.

Shailesh is right on spot about the huge opportunity that lies ahead for payment banks in India. Poised to reach $500 Bn by 2020 according to a report by Google and Boston Consulting Group, the digital payments segment in India has witnessed a sea change in recent times. As per the report, cashless transactions in the consumer payments segment is expected to double to 40% in the next three years. In this context, it’s worth noting that Fino had partnered National Bank for Agriculture and Rural Development (NABARD) to deploy 5,000 Aadhaar-enabled micro ATMs across villages in Haryana, Madhya Pradesh, Bihar, Gujarat and Maharashtra as part of NABARD’s push for rural banking.

While the bank stated that it’s still early days to comment on number of active customers, prior to becoming a payments bank Fino had been serving around 5 Lakh customers through remittance, BC lending, bill payments mobile and DTH recharges. Some of them could become its customers while others can continue having transactional relationships with the bank.

But Fino Payments Bank, is not alone in leveraging this opportunity. Paytm which debuted its Payments bank in May and is the first bank to offer cashback on deposits is also planning to open 31 branches and 3,000 customer service points in a year. According to Vijay Shekhar Sharma, the goal is to reach 500 Mn bank accounts by 2020. It is also gearing up to launch its own Paytm debit card in association with Rupay. About 10 million people have signed up for bank accounts during the beta launch of Paytm Payments Bank. Airtel which beat Paytm to open the first payments bank, began operations in 29 states, currently offers the highest interest rate of 7.25 % p.a. on deposits in savings accounts. Besides there is government-operated postal system, India Post, which opened its payments bank in January 2017, and then there is Indian multinational conglomerate, Aditya Birla Group which is also planning to launch its payments bank through the newly formed Aditya Birla Financial Services by year end.

While Fino Payments bank’s ambition to reach 50 Mn customers in next five years is lofty, one needs to remember  the strong competition it will face. The underbanked segment being targeted, as mentioned by Shailesh is a huge opportunity. But it is also a tough nut to crack given of low awareness levels, and the fact that it is still warming up to technology and formal banking systems. Of course, the payments bank space will only further heat up as Internet penetration and awareness increases and this segment starts understanding and trusting the banking systems. How rapidly this transformation happens, in five years or 10 years, is something that is debatable.