But when one hears news of defaulting builders, projects getting delayed and customers’ money is tied up for years in such projects, one is bound to raise the question – can the real estate sector rise beyond these inefficiencies to actually become the behemoth it is projected to be? Sashi Kiran, co-founder of real estate tech startup FalconBrick believes it can.

And that is what exactly the end-to-end, mobile-based, construction management solution for real estate builders and developers, co-developed by Sashi Kiran, Gautam Mayur and Aditya Shankar, has been aiming to do since its inception in early 2016. More specifically, it is attempting to weed out efficiencies from the real estate sector, by bringing in transparency and accountability, and most importantly, help builders avoid project delays and lower the project costs.

Speaking to Inc42, Sashi reveals, “While there is technology in the real estate industry, it is limited to certain pockets. So while there are people using CRM and ERP tools, but they do not address the issues on the ground. The man on the construction site has no clue and is untouched by technology. Secondly, the top management has limited visibility on project delays. They get reports at the end of the month and by the time they get reports, projects have been delayed, resulting in increased costs and low customer satisfaction. It is this burning issue which FalconBrick aims to address by digitising entire construction operations in a way that it helps accelerate projects and allows much earlier handover to customers.”

But how exactly does a mobile app save projects from getting delayed, prevent builders from defaulting and enhance customers satisfaction?

Let’s take a look at the product to better understand why the answer to these questions lies in technology.

A typical construction project goes through a life cycle starting from designing, to the building, to handover. There are multiple teams involved at every step with broken communication and synchronisation. Also, every person in the builder team who is involved in the construction of a project mostly does things manually. As the person on site has low or no access to technology and those at the top have low visibility, inefficiencies build up fast in this chain. 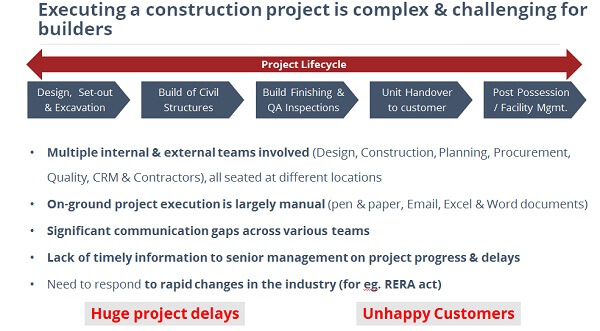 It’s here that the FalconBrick HandOff mobile app aims to fit in. The mobile platform enables each party involved in the project – be it in procurement, design, civil engineering or stock management – to connect on the same platform and manage the entire project on the FalconBrick app in real time. So the end-to-end solution enables right from the supervisor on the ground to the CEO of the company to be on the same page as far as project management and execution is concerned.

“L&T is constructing a 17-tower project in Bengaluru with more than 1500 apartments. So every slab being put, every single floor being tiled is now monitored remotely on our app. So just as the supervisor updates on his mobile app that the tiling of a such and such flat is complete, the CEO can immediately see that on his dashboard and can further update customers on the progress.” 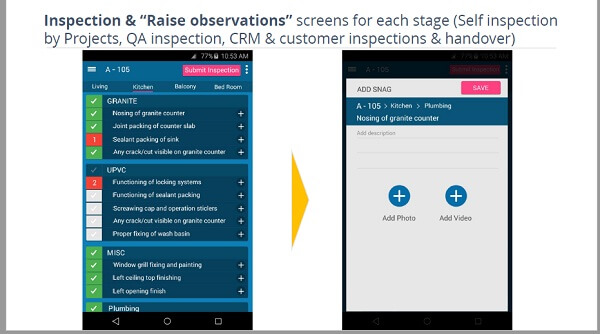 In addition, people at the top can track daily progress of the project and can even determine if any delays are expected through real-time data analytics and live dashboards. Predictive analytics helps predict expected delays beforehand in order to avoid them and helps builders benchmark projects, contractors and employees. As work in progress at the site is captured real-time, CEOs can give customers clear answers on when will the project be completed.

Sidharth Pansari, Owner & Director, Primarc Group, Kolkata vouch for the same. He says, “HandOff is an end-to-end workflow solution that allows builders to track the performance of the project, its contractors as well as individual employees. It not only breaches unavoidable communication gaps but has effectively reduced the turnaround time (TAT) on raging on-site issues.” 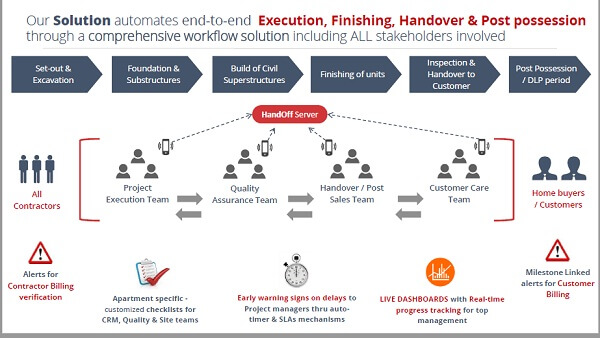 But how easy is the solution to use for people on the ground?

As per Sashi, the app is a very user-friendly solution and can be easily used by supervisors who are not very well versed in English/Hindi. More so, the startup provides its clients a completely plug-and-play customised solution that takes a builder from a few days to a maximum of only three weeks to get completely onboarded.

Thus FalconBrick claims to provide accelerated project execution to its clients, with projects being handed over almost 20% earlier than expected dates and with a 15% reduction in costs.

The real estate startup now counts about 25 large customers across eight cities. These include large builders, construction firms and developers such as L&T Construction & Realty group, Rustomjee, Brigade Group, Primarc Projects, Puravankara, Oberoi Builders, among others. In terms of projects, it is currently handling a portfolio of 80-100 projects for these builders.

Sashi claims that in the first year itself, FalconBrick has seen over 6x-7x growth in customers. While he did not disclose actual numbers, he stated that revenue too has been on a growth trajectory of 7x-8x. As a result, the firm has been profitable from the first quarter itself. Consequently, it is looking to handle 350-400 projects by the end of FY 2017.  Additionally, the startup is also looking to make a foray into Southeast Asia and the Middle East markets. 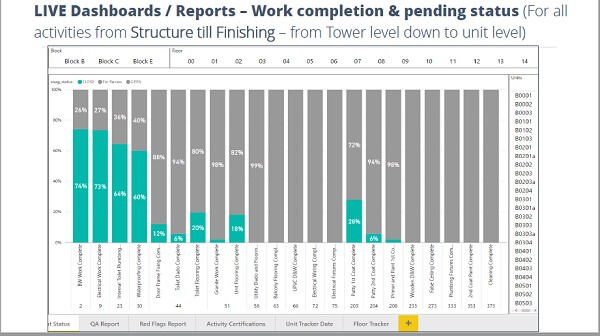 The startup follows SaaS model for monetisation. Sashi adds that FalconBrick has deliberately stayed away from the user-based licensing model because, in that model, one additional user means more cost.

“As we want more users to use our app, all our plans allow unlimited users. We charge based on the amount of work which could be per apartment or per square feet,” he explains.

This model also allows it to differentiate itself from ERP products which Sashi claims are not cost effective as compared to FalconBrick. Also, the time taken to on-board a customer on the app is almost one-tenth of time which an ERP would take. Cost and pricing are on the lower side when compared to an ERP. Also compared to an ERP, which requires process re-engineering at times, the product provides flexibility of configuring any number of projects, add any number of contractors and adapt it to a builder’s project list.

Internationally, the startup competes with players like Leansite Apps, Renovate Simply, Construction Automation Inc, Joist etc. On the home field, major startups in the space include BuildTraders, Rocket Homes and Einsite, among others.

The construction industry in India is a highly unorganised market. Although currently, it is contributing almost 7% to the country’s GDP at $165 Bn, the industry has not been yet been dramatically transformed by technology. Very few technological improvements provide benefits on the ground in this industry and that’s where FalconBrick has an edge.

With GST and Real Estate (Regulation and Development) Act (RERA) kicking in, builders need to be transparent and accountable and for that, they need technology. FalconBrick’s mobile end to end platform clearly aims to address the burning issues that plague the real estate and construction sector leading to projects delays and remove inefficiencies leading to low customer satisfaction. How quickly it will be able to attract the attention of builders in India’s booming real estate sector as competition increases will, however, be its real test on the ground.