While the government is pushing for EV adoption, it seems to be lagging behind in the execution of its ideas for creating the infrastructure for EVs

India has been actively trying to promote the use of electric vehicles (EVs) since 2015, with the Centre and many state governments coming out with policies to spur the adoption of EVs. The efforts seem to be bearing fruits, as EV sales are on a rise in the country.

It makes sense for a country of India’s size, with 80% dependence on oil imports and facing air pollution issues in many cities, to try to move to EVs. However, widely available charging infrastructure is a prerequisite for a successful transition towards EVs, and India seems to be stumbling there currently.

The adoption of EVs saw a significant rise in the country between FY20 and FY22, with EV sales rising 155% year-on-year to 4,29,217 units in FY22, as per Federation of Automobile Dealers Associations’ (FADA) data. However, the number of operational public charging stations in the country stood at 1,640 as of February 2022, a rise of only 77%, or 713 charging stations, from June 2020, as per the Ministry of Power’s data. 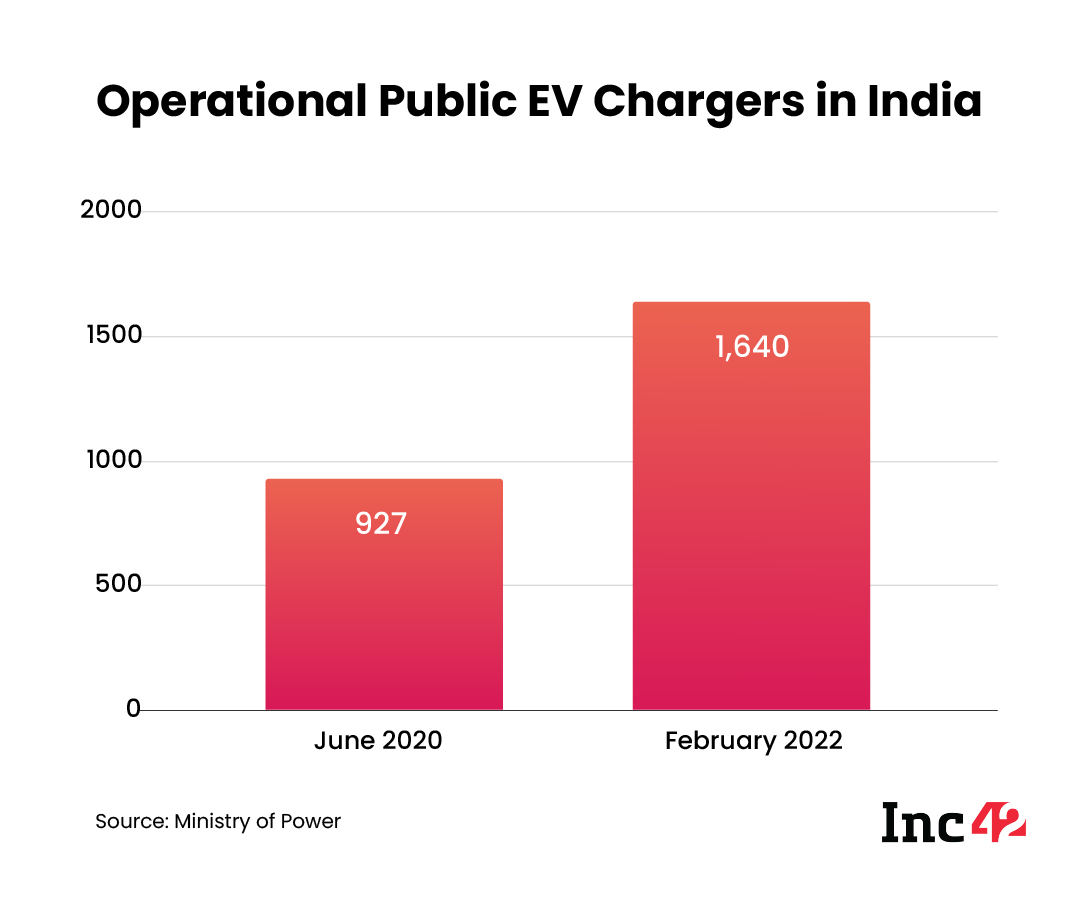 This will require a lot of investment in setting up the required charging infrastructure for EVs, and in a short span of time.

The government has shown a good intent to support the EV industry, but it is lacking somewhere in execution, said Rahil Gupta, cofounder and CTO at HOP Electric Mobility, which manufactures two-wheeler EVs and also has a network of battery charging and swapping stations.

Why Is The Execution Pace Slow?

According to Gupta, the execution of plans for setting up charging stations is not happening at the scale or the speed the government intends. This, he says, is driven by two major reasons — lack of clear timelines and putting small and big players in one bucket.

Gupta said that the government is currently keeping big players, like Tata Power and Energy Efficiency Services Limited (EESL), and smaller startups in the same bucket while coming up with new policies or mandates, which is not ideal for both the set of players. “It’s important to segregate both,” he said.

The commitment that the government wants from a big conglomerate can’t be delivered by startups, while the policies for startups are affecting the execution of bigger companies, he said.

According to a few industry leaders, right now, the timelines provided by the government are also very loose and there is no clear roadmap or blueprint for achieving the long-term goals. They said if the government provides the organisations with an execution timeline, the speed to set up the EV infrastructure can be increased by 10X.

There also seems to be a stark difference in the pace of setting up charging stations between bigger and smaller cities.

As per the latest data of the Ministry of Power, 940 stations out of the 1,640 charging stations as of February 2022 were in nine megacities – Surat, Pune, Ahmedabad, Bengaluru, Hyderabad, Delhi, Kolkata, Mumbai, and Chennai.

The government said that 678 public EV charging stations were set up in these nine cities between October 2021 and January 2022, an impressive 2.5 times jump from the earlier numbers provided by it. However, it also means that only 35 charging stations were set up in the entire country between June 2020 and February 2022, leaving that four-months period.

This raises questions as to when the thousands of other cities and towns will get a proper network of public charging stations. Besides, it also raises questions about the government’s plans to set up such stations within a 25 km range on both sides of expressways and highways and to have at least one public EV charging station within every 3 km x 3 km area in cities.

Should The Focus Be On Cities Or Highways?

According to Nemin Vora, founder and CEO of Odysse Electric Vehicles, India is a decade away from having an EV charging station every 3 km in cities.

However, Vora believes that the government should focus more on installing charging stations on highways.

Intercity travel on EVs comes with range anxiety as to how far can the vehicles travel with a single charge. So, the government needs to come up with a roadmap for electrifying a particular stretch of distance at a time, so that people in at least that stretch are confident to travel in their EVs, he said.

Echoing similar sentiment, Prashant Chandrasekaran, cofounder and COO at ValetEZ, said that there needs to be more focus on setting up public charging stations every 25 km on highways because it is more critical for people travelling 100 km or more to be assured that they can safely reach their destinations.

Besides, the central government can work directly on setting up charging stations on highways as the network is majorly maintained by it, he added.

Chandrasekaran said that if the government can facilitate startups and companies like EESL to roll out charging infrastructure, it can soon achieve such density on highways.

Besides, the government also needs to improve the execution of its policies for the sector. In Phase-II of the Faster Adoption and Manufacturing of (Hybrid &) Electric Vehicles (FAME) India Scheme, which started on April 1, 2019 and was set to end on March 31, 2022, the government allocated INR 1,000 Cr for the development of charging infrastructure in the country. It was earmarked for a period of 5 years (2019-20 to 2023-24).

FAME was designed to boost overall EV adoption in the country and provide subsidies for buying EVs. However, only 5%, or INR 492 Cr, of the total INR 10,000 Cr allocated under Phase II of the scheme was spent till March last year.

In 2021, the Ministry of Heavy Industries said it sanctioned 2,877 EV charging stations in 68 cities across 25 states/union territories. Additionally, 1,576 charging stations were also sanctioned across nine expressways and 16 highways under Phase II of the FAME India Scheme.

Earlier, under Phase-I of the FAME India Scheme, the ministry sanctioned about 520 charging stations/infrastructure for about INR 43 Cr.

Govt Needs To Step Up

However, Maitra added that as far as the government’s own performance is concerned, the 2.5 times increase in charging stations in nine megacities between October 2021 and January 2022 looks good only in isolation.

He said the increase in charging stations is below the pace of EV sales growth. For instance, EV two-wheeler sales grew by a whopping 5.5X and total EV sales were up 3X between FY21 and FY22. 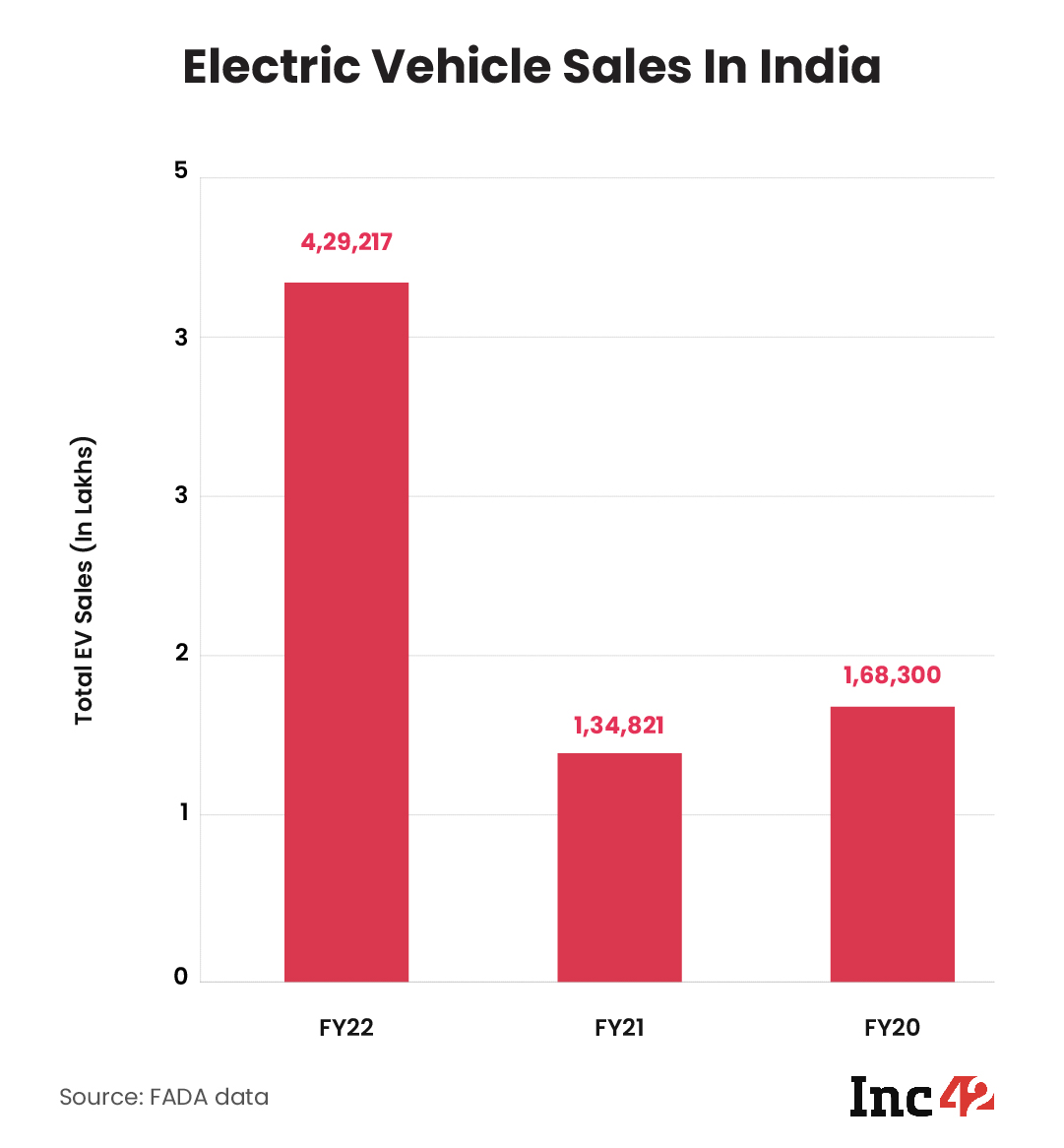 “To sustain and promote EV demand, there is a strong need to incentivise players to set up stations in neighbourhood localities like residential apartments, commercial complexes, shopping malls, etc. along with government and utility companies playing the role to set up large charging stations across state and national highways to prompt people to buy EVs,” he said.

To strengthen the EV infrastructure in the country, the government think tank NITI Aayog released the draft battery swapping policy last month. It is aimed at improving the efficiency of the battery swapping ecosystem for electric scooters and three-wheeler e-rickshaws, which would thereby drive EV adoption.

“Like fueling stations for ICE vehicles, adequate, affordable, accessible, and reliable charging networks are a prerequisite for mass EV adoption. Efforts are underway in India to boost the availability of charging infrastructure. Charging still takes significantly longer than refuelling an ICE,” it said.

“Battery swapping is an alternative which involves exchanging discharged batteries for charged ones and provides flexibility to charge them separately. This de-links charging and battery usage and keeps the vehicle in operational mode with negligible downtime,” the draft read.

Though industry leaders hailed the initiative as a good start, they raised a few doubts regarding interoperability, standardisation, data collection, subsidies and more.

Talking about the swapping infrastructure, Maitra said swapping stations need to be standardised and made interoperable across original equipment manufacturers (OEMs). While battery swapping is an efficient solution, a collective effort is required from both the government and the industry to implement such standards, he said.

The Way Ahead And Role Of OMCs

According to Gupta, since the EV industry is in its nascent stage, perhaps the government is trying to observe how the industry functions and is taking a wait-and-watch approach.

All the industry leaders Inc42 spoke to agreed that the government has taken some commendable steps for the sector so far, but also pointed out that a lot more needs to be done for setting up the EV infrastructure.

As of February 19, BPCL had installed 52 EV charging stations, while HPCL had installed 382 such stations. Needless to say, the pace at which the plans of these OMCs are executed will also play a big role in further pushing the EV adoption rate in the country.