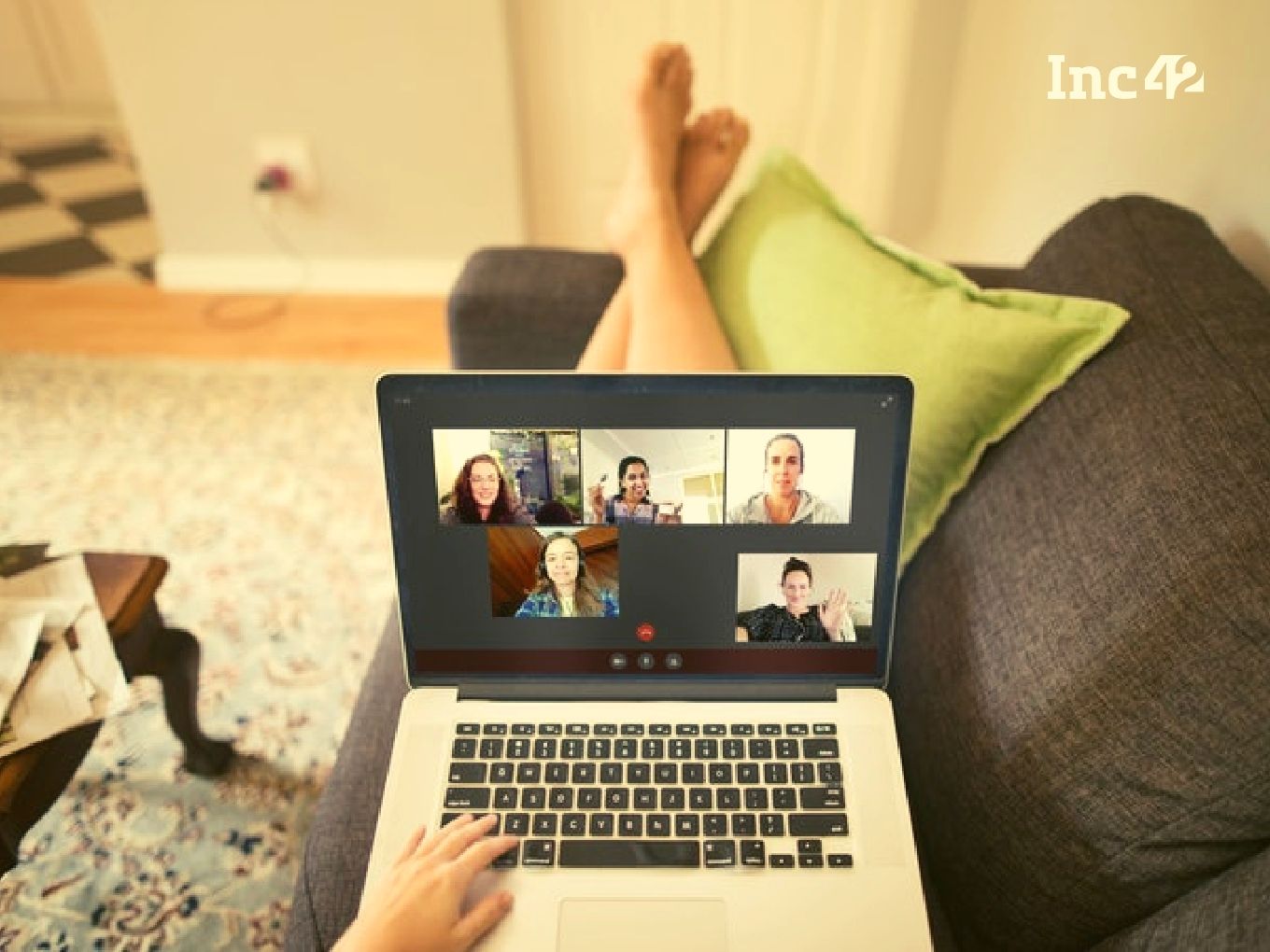 Monthly data consumption has increased to 8280 petabytes post the lockdown, according to the COAI

The average data usage per month has surpassed 400 GB in March 2020, as per Excitel Broadband findings

The workplace is working with mini offices at home and even schools and universities have gone online. Contactless digital payments are witnessing greater adoption, while telemedicine and virtual consultations have replaced visits to the doctor.

India is buying everything online too, from grocery to medicine to food and even the media and entertainment have gone digital, with social media platforms, video streaming, videoconferencing and online gaming taking care of recreation and communication. If anything the Covid-19 pandemic in India has made internet more vital than ever for citizens, businesses and governments.

The so-called Digital India is booming, but at the same time, it is also hanging by a thread with a lot of pressure on internet service providers (ISPs) and telecom companies. The question remains whether India is ready for such a massive digital adoption and the big consumer migrations, and how are these enablers working to fill the gaps.

As Covid-19 began spreading across the country in mid-March, several companies had asked its employees to work from home before the official lockdown announcement (March 25, 2020). This inevitably created a spurt in demand for home broadband installations. “It was close to 3x times the normal demand,” said Vivek Raina, CEO of Excitel Broadband, which offers high-speed broadband services in Delhi NCR, Jaipur, Hyderabad, Bengaluru and Lucknow.

Though authorities across states have issued curfew passes (or e-passes) for delivery of essentials such as food, grocery medicine and maintenance services, there are still no clear guidelines in terms of effectively keeping services running. For example, equipment fixes are hard with parts not being sold in the market, while devices and laptops are also not available in the market.

“However, once the lockdown was announced, the demand was still there, but the ability to install networks became much less as the movement became restricted,” he added.

Even if these hurdles are crossed, each company only has a limited number of curfew passes so it’s a cumbersome task for companies to allocate resources accordingly and deliver the services on a timely basis. This is why many customers are seeing delays and cancellations in their service requests or orders.

Companies are leaving no stone unturned and are ensuring that the nation remains calm, connected and functions during the fight against the novel coronavirus outbreak.

COAI said that some of its member operators have provided extended validity to the continuation of their services and talk time benefits to ensure continuity of service to the citizens, who are at the bottom of the pyramid and are not in a position to recharge their prepaid services.

Recently, Vodafone Idea took a slew of measures to enhance network experience and customer service via alternate channels to keep the people of Assam and North East connected during the crisis. It is currently monitoring the network to ensure optimum efficiency in the seven states and field engineers are on the ground working 24×7 to keep connectivity up and running, where it has upgraded over 650 sites in the region since the declaration of lockdown.

At the same time, with retail outlets being shut due to the lockdown, Vodafone India is helping its 2G customers using feature phones to access quick recharge options through SMS and missed calls.

“These efforts are in line with the decisions of the government to ensure that such citizens even in the underserved areas, be it Tier 1, Tier 2 and Tier 3 markets, can remain connected for essential needs. Even on a conservative basis, the value of such benefits is more than INR 600 Cr,” said director general of COAI Rajan S Mathews.

Further, Mathews said that the operators have launched programs to incentivise users to recharge for other users. Other channels like ATMs, pharmacies as well as a wide network of grocery stores have also been activated. “All the above measures have ensured that approximately 80-90% of the subscriber base is able to recharge,” he added.

“As of now, we are seeing an increase in demand up to 20-35%,” said Excitel’s Raina about the growing number of new installations in Tier 1 and Tier 2 cities due to work-from-home kicking in.

Most consumers have now realised that mobile data is not good enough for work-related applications. It can support a couple of applications but beyond chatting and social media platforms, it cannot handle the bandwidth needs of multiple work-related applications and productivity tools. Ultimately, this has led to a surge in demand for installations of fibre-to-the-home (FTTH) broadband. The demand for wired-line installation is said to have increased significantly.

Airtel CTO  Randeep Sekhon recently said that the telco was seeing a higher traffic growth in suburban and rural areas, than in Tier 1 or metros, mainly due to large-scale migration. Cellular Operators Association of India (COAI) director-general Rajan S Mathews said that the average monthly wireless data was 6900 petabyte (PB) at the quarter ending December 2019, as per the quarterly results recorded by their member operators.

“It is estimated that there is an increase of around 20% after the Covid-19 outbreak and the monthly data consumption has been around 8280 PB,” added COAI’s Mathews.

In the Covid-19 lockdown, Excitel which claims to have 3 Lakh consumers in India recorded an average data consumption of 15.56 GB per day. 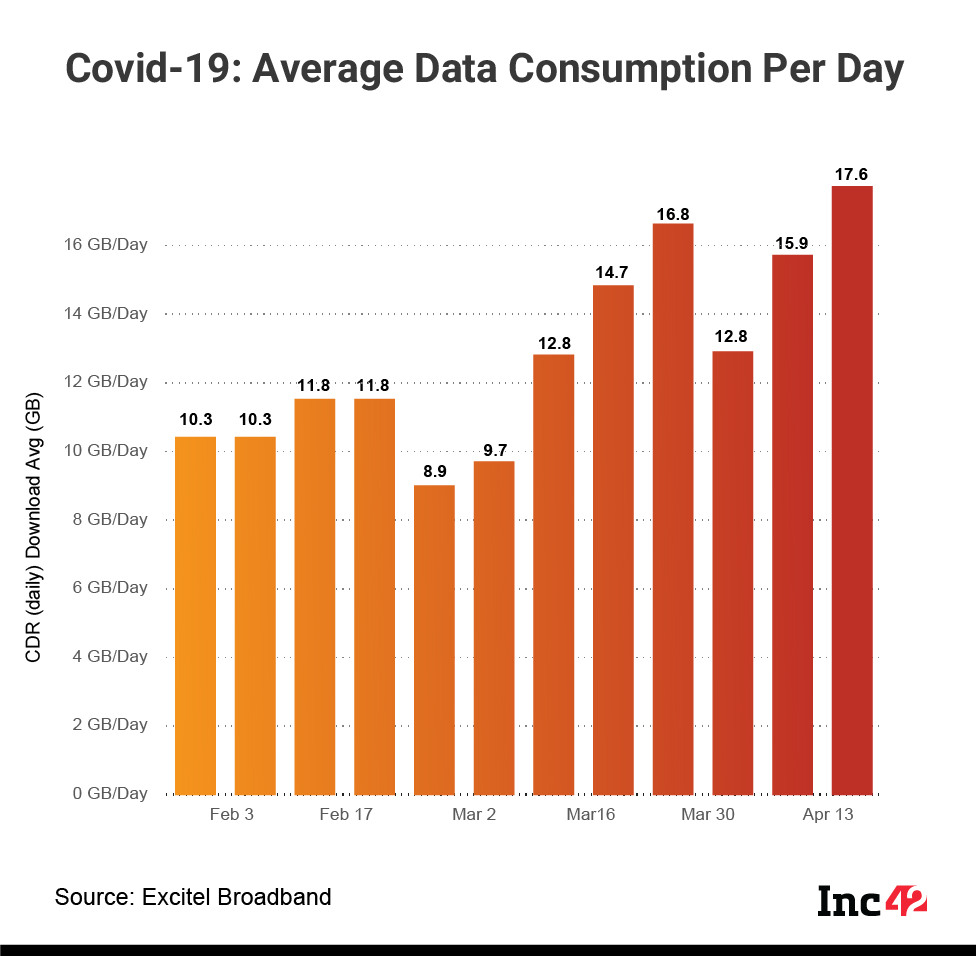 Furthermore, the average data usage per month surpassed 400 GB in March 2020 for Excitel. However, this is soon about to rise exponentially. For instance, in the first two weeks of April 2020, alone, their users consumed about 16.75 GB per day. “We are witnessing an increase of 30-35% average data use per customer,” shared the CEO of Excitel Broadband

Moreover, people in metros and Tier 1 cities are using only 3% more bandwidth than before. On the other hand, small telecom circles are consuming 15% more internet than before. This might have happened because of the massive exodus of daily-wage workers who have left the cities amid the lockdown.

Further, Mathews said that the total surge is still around 20%. He added that COAI is further requesting the government to take more measures to ease the pressure on telecom operators’ infrastructure. “DoT has indicated they will work with the industry to address their network needs, spectrum or other items, on a scientific and specific need-based basis,” he said.

Behind The Data Consumption Rush

The increase in data consumption is primarily due to more people working from home and restrictions of movement caused due to lockdown across the country. Since there is no physical interaction or face-to-face meetings or social and business events happening across the country, the only way people are staying connected in the Covid-19 world is via the internet.

For these tools to work seamlessly, you need robust data packages. For instance, YouTube, Netflix and Amazon Prime Videos have already reduced the quality of the content to standard definition as per the government’s directives.

Videoconferencing, on the other hand, consumes more data in real-time and quality differs based on the speed of the internet and the number of participants etc. Few experts suggested that the videoconferencing applications have to come up with new features and user experience which allows users to connect with others even when the network is weak or the internet speed is low.

For instance, some of the OTT platforms and video streaming platforms use caching which allows users to enjoy less buffering when streaming without compromising on the video quality. However, when it comes to videoconferencing applications, that is not the case.

The internet has been at the epicentre of India’s digital journey. In the recent past, there have been several debates about how consumers and businesses are facing problems due to slow internet connection, dropped video calls and buffering of OTT content etc. Several industry experts had also said that the existing telecom infrastructure was not ready to support such a drastic increase in data consumption.

“We are continuously monitoring the traffic pattern and confident of handling the growing demand for voice and data services during the lockdown period,” said Vishant Vora, CTO, Vodafone India.

Further, Vora said that their 12000+ ma-MIMOs (tower antennas), which is one of the largest deployment in the country across key markets, are substantially helping in managing the traffic spike. In addition to this, the company is deploying capacities across using all the means including the addition of cell on wheel (CoW) sites wherever appropriate.

“We have also requested the department of telecom (DoT) to clear our pending applications for spectrum allocation. We are hopeful that DoT would expedite our spectrum liberalization requests and regularize our backhaul spectrum,“ said Vora.

While the telecom players and ISPs are walking the extra mile to deliver India the most crucial of all essentials, a majority of them are finding it difficult to add or provide services to new consumers and businesses. Telcos with large resources are able to deploy infrastructure for the lockdown much faster.

Even though companies have been provided with e-passes or curfew passes to carry out the installations, there are minor hiccups caused due to restrictions in certain areas of the city, which makes it difficult for a few local players and technicians to seamlessly install the fibre-optic connections or networks. At the same time, the raw materials such as routers and devices are scarce in the market due to nationwide lockdown and the crunch in supply.