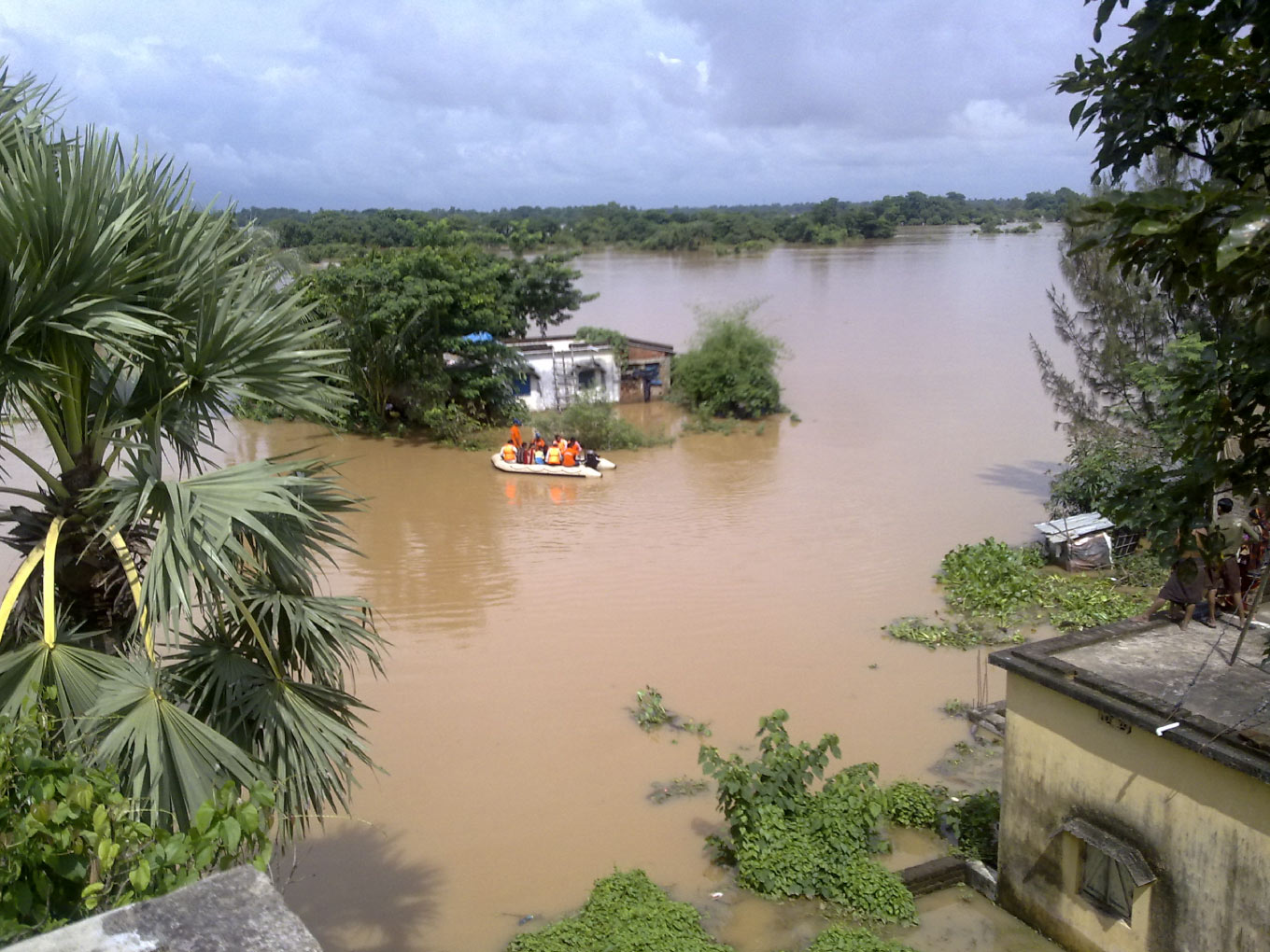 Can we expect the RBI to open the gates for Indian crypto exchanges on a pilot basis so more donations can be raised to rebuild Kerala?

‘God’s own country’ — Kerala — has been hit by devastating floods that have taken more than 400 lives since the monsoon started in June, of which 231 have died just in the second spate of floods that started on August 8. The floods have displaced more than 14 Lakh people, who are living in 3,200 relief camps, and caused an estimated $3 Bn in damage, according to initial estimates. The Centre has declared the natural disaster a ‘severe calamity’ of Level 3.

And, while man may not be able to triumph over nature’s force, Kerala’s startup community as well as technology leaders from around the world have come together in these turbulent times to do all they can to help the flood affected.

All the big names in the startup and tech ecosystem — Paytm, Flipkart, Facebook, Google, Zomato, BigBasket — have been taking a lead role in helping people donate relief materials for the victims of the Kerala floods.

It’s not only big companies that have been moved into making humanitarian efforts for Kerala. Mumbai-based cryptocurrency startup PocketBits, founded by Sohail Merchant, has also joined in the relief efforts by making it easier for crypto users to contribute to Kerala. Other crypto startups like ThroughBit are putting things in place to do their bit for the state.

The efforts of the crypto startups coming forward to help at a time when they themselves are in troubled waters are commendable. Crypto startups across the country are waging a war for survival with the Indian government since the Reserve Bank of India (RBI) banned banks from dealing with any cryptocurrency related entities.

Crypto startup PocketBits has come up with a novel way to help in the Kerala flood relief efforts. It has set up a page to assist crypto token holders from around the globe to contribute to the CM’s Distress Relief Fund (CMDRF) and enable the purchase of relief goods for transfer to NGOs. The company has already received donations worth INR 1.55 Lakh.

In an email response to Inc42, PocketBits founder Sohail Merchant said, “We are trying to help the affected by raising funds via cryptocurrencies for mainly two reasons. One, to help Indian users who have cryptocurrency on exchanges and cannot withdraw INR to donate as most Indian exchanges don’t offer functional INR withdrawals, so they can easily contribute towards the efforts. Second, to enable the global crypto community to contribute in the efforts to rehabilitate the Kerala flood victims without worrying about wire charges etc.”

PocketBits is enabling the conversion of all tokens donated by crypto users to INR at spot prices every few hours. Half of these funds will be wired to the CMDRF. The other half will be used to buy relief material to donate to Goonj, a Delhi-based non-profit organisation which is working to provide relief to the affected victims and also to help rebuild affected areas.

PocketBits also plans to work with Goonj on Amazon and Anbodu Kochi — a team of volunteers that has established collection centres to collect relief materials — to have essentials such as sanitary napkins and medicines delivered to pick-up centres in Bengaluru.

“Although the central government has issued INR 500 Cr ($77.48 Mn) assistance to the state, damages incurred may well be in the billions. With food supply, water, and medicines seeing shortages due to disruptions in supply chains, the people are in dire need of help from around the world. If you are a retailer in Bengaluru or can help us acquire these items, drop a message to @joel_john on Telegram,” said PocketBits.

In conversation with Inc42, Indian crypto exchange ThroughBit founder and CEO Abhishek Gupta said, “We have our donation page ready and we can take in 70+ cryptocurrencies around the globe to do our part in this hour of need. The only thing we are contemplating is how to transfer crypto to the CM’s relief fund owing to the several roadblocks the government has put in recently.”

On April 5, 2018, the Reserve Bank of India (RBI) had banned Indian banks from being involved in any kind of transactions linked to cryptocurrencies.

However, PocketBits is trying to work around the RBI hurdle. Merchant explained to Inc42 that crypto-to-INR conversion is carried out on the PocketBits platform itself as they offer INR withdrawals via a third-party payment processor.

The received donations are then converted to INR in batches to protect against volatility and disbursed to one of its partners on the ground who is actively gauging the requirements in Kerala. As of now, they have dispatched 25,000 sanitary napkins to the affected areas and donated INR 41,891 to the CMDRF. They have collected another INR 69,665, which will be disbursed soon.

“We have received crypto contributions in all forms: BTC, ETH, USDT, BCH, LTC, and TRX. This is the least we can do for the affected in the state of Kerala, our initial disbursements were for immediate relief and now, as the water is receding, we will focus on rehabilitation and disease prevention,” he added.

While the small startups are stepping on the gas pedal now, bigger tech companies such as Paytm, Facebook, Google, Zomato, and BigBasket have already been working for a while to contribute/help people contribute to the Kerala relief efforts.

Digital payments company Paytm has so far raised more than INR 30 Cr for the Kerala Relief Fund. Paytm has also promised to make a matching contribution up to INR 1 Cr.

We are happy to share that we have crossed INR 30 Crore in contributions in under 4 days, from over 12 lakh Paytm users for #KeralaFloodRelief ?

Star India, which had previously announced INR 2 Cr in relief for the Chief Minister’s Distress Relief Fund, decided to increase its donation to INR 5 Cr considering the scale of the disaster. Star India and its employees stepped up its relief and rehabilitation efforts in Kerala along with its parent company, 21st Century Fox.

Ecommerce major Amazon India is currently working with Habitat for Humanity India, World Vision India, and Goonj. In addition, the Amazon operations team is working to provide relief kits to the affected areas and providing drinking water to its impacted service partners, associates, and immediate communities.

An Amazon spokesperson said, “Our Last Mile team in the affected districts have extended their support by contributing time to help the NGO partners. Various teams have also arranged collection boxes and organized donation drives to support local communities. Amazon employees have donated lakhs of rupees over the last two days through the Amazon Cares employee volunteering portal.”

Apart from money, startups are also helping with food donations. Zomato and BigBasket have called for food donations in partnership with the Akshaya Patra Foundation and Goonj respectively.

Zomato has activated a ‘Help Kerala’ banner on its app in the ‘Order Food Online’ section. On the other hand, one can buy an essentials kit on BigBasket and donate it. BigBasket will also be donating 20% of all individual contributions for relief.

Hari Menon, co-founder and CEO, Bigbasket, said, “The situation in Kerala has turned into a natural calamity and the state needs its fellow citizens. We urge everyone to come forward and join us. We would be happy if this initiative is able to make a difference in people’s lives, however small it may be.”

Zomato, however, has pulled the campaign back. As shared by the Zomato communication team with Inc42, it was able to fund more than 200,000 meals in Kerala.

“We have now stopped taking any more contributions since last night so that we can deliver well on the trust our users have placed in us and The Akshaya Patra Foundation — our partner on the ground. We will try to switch this on again depending on the capacity our partner can cater to and the on-ground requirements. Truly appreciate the support from all of our users,” Zomato told Inc42.

Here’s How You Can Donate To Kerala Flood Relief

One can directly add funds to The Chief Minister’s Disaster Relief Fund (CMDRF) and can connect with district collection centers in the state. Further, crowdfunding platforms such as Ketto, and Milaap are also raising funds to help the state authorities. Crowdfunding startup Crowdera has launched a campaign called ‘Help Kerala Flood Victims’, in which the proceeds will directly go to the Kerala Flood Relief Account.

Paytm has activated a Kerala flood donation feature on its app that is linked directly to the CMDRF’s account to help aid rescue operations. In a blog post, Paytm stated, “We do not charge you or the government any fee or transaction charge on contributions/donations made on Paytm. In fact, Paytm pays some fees to various banks on each card payment and that can go as high as 2%.”

Google Tez too has introduced an option for users to directly transfer money to the CMDRF.

On Amazon, people can donate relief material to its nonprofit partners by visiting the ‘Kerala Needs Your Help’ page.

Coimbatore-based NoFoodWaste is a startup that is collecting leftover food and transferring it to government distribution centres.

Technology is viewed as a boon as well as a curse. Even though technology gets a lot of flak for having a role to play in precipitating natural disasters such as floods, the tech community has come to the aid of Kerala flood victims.

This time around, technology, which enables people to stay connected across borders and enables online remittances and a whole lot more, has brought the world together to enable them to help the Kerala flood-affected.

As the Indian startup ecosystem increasingly steps forward to do its share for the Kerala flood victims, it has demonstrated a real, burning example of the “unity in diversity” India has always been so proud of.

Indian startups have proven that they may be separated by ideas but are united in the spirit of humanity.

The Kerala floods are just one example of a natural disaster in which the crypto community is coming forward to help. If crypto startups on a global scale can contribute to such humanitarian crisis and disasters that abound in India, shouldn’t the RBI, too, come forward to support them by making things easier for them?

Can we expect RBI to open the gates for Indian cryptocurrency exchanges on a pilot basis so that more donations can be raised to rebuild Kerala?