Can Indian Fintechs Survive The Funding Winter Amid Economic Downturn?

Three Indian fintechs have joined the unicorn club in 2022, but there is almost a 50% drop in average valuation compared to 2021

In the last decade, India emerged as a fintech powerhouse, becoming the third-largest fintech ecosystem globally. As the government pushed a host of digital infra and payment initiatives such as the United Payments Interface (UPI), Aadhaar-enabled payment system (AePS), India Stack, and more, the number of Indian fintechs continued to grow. Today, more than 4.2K companies are active in the Indian fintech space, striving to get a significant share of the $1.3 Tn market opportunity.

The growth momentum of the fintech industry did not slow despite the Covid crisis. In 2021, 11 fintech startups entered the coveted unicorn club at an average valuation of $2.07 Bn. The total number of fintech unicorns reached 21 that year when credit solution firm Slice entered the club with $220 Mn funding, led by Tiger Global and Insight Partners.

But five months into the new calendar year, a bearish trend seems to have gripped the startup funding space, and Indian fintechs across growth and late stages have suffered the most. Three fintech companies – CredAvenue, Oxyzo Financial Services, and Open Bank – have joined the unicorn club since January 2022.

But their average valuation is $1.1 Bn, a drop of nearly 50% compared to the previous year. The steep slide inevitably raises the question of whether the fintech unicorn club will be able to surpass its 2021 record by the end of 2022.

Interestingly, the downturn has not surprised some startup founders. The sector has been pretty frothy both locally and globally, and it is bound to lose some of the fat as the overheat of 2021 is no longer there.

“In the last two years, we have seen fintech startups turn into unicorns at an insane speed. So, now we can expect a slowdown for at least the next three to six months. The number of unicorns this year will be far fewer than the last year,” said Madhusudan E., cofounder and CEO of KreditBee, an instant personal loan platform for professionals. 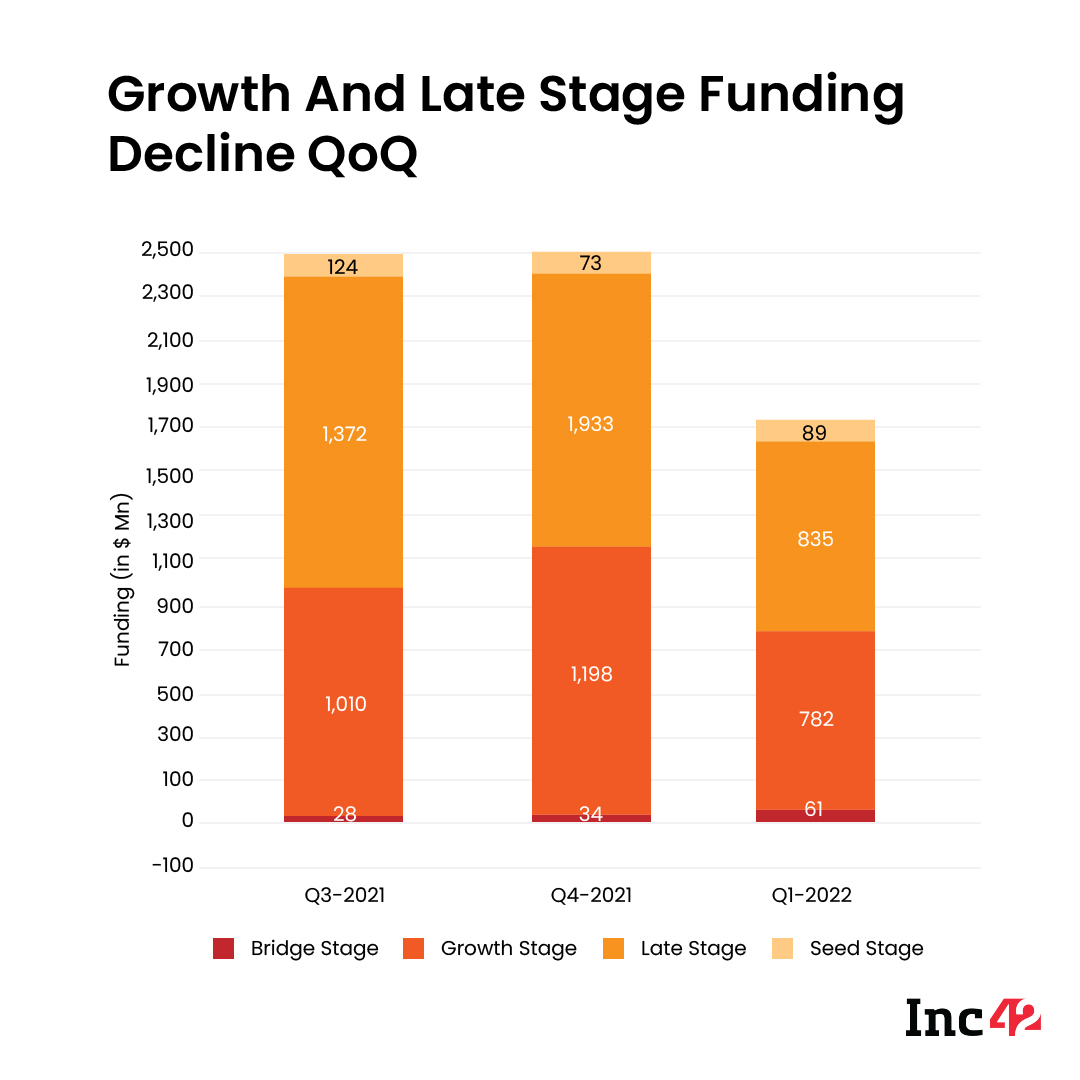 There was no letup even after the first quarter, and fintech funding continued to slide in April and May. 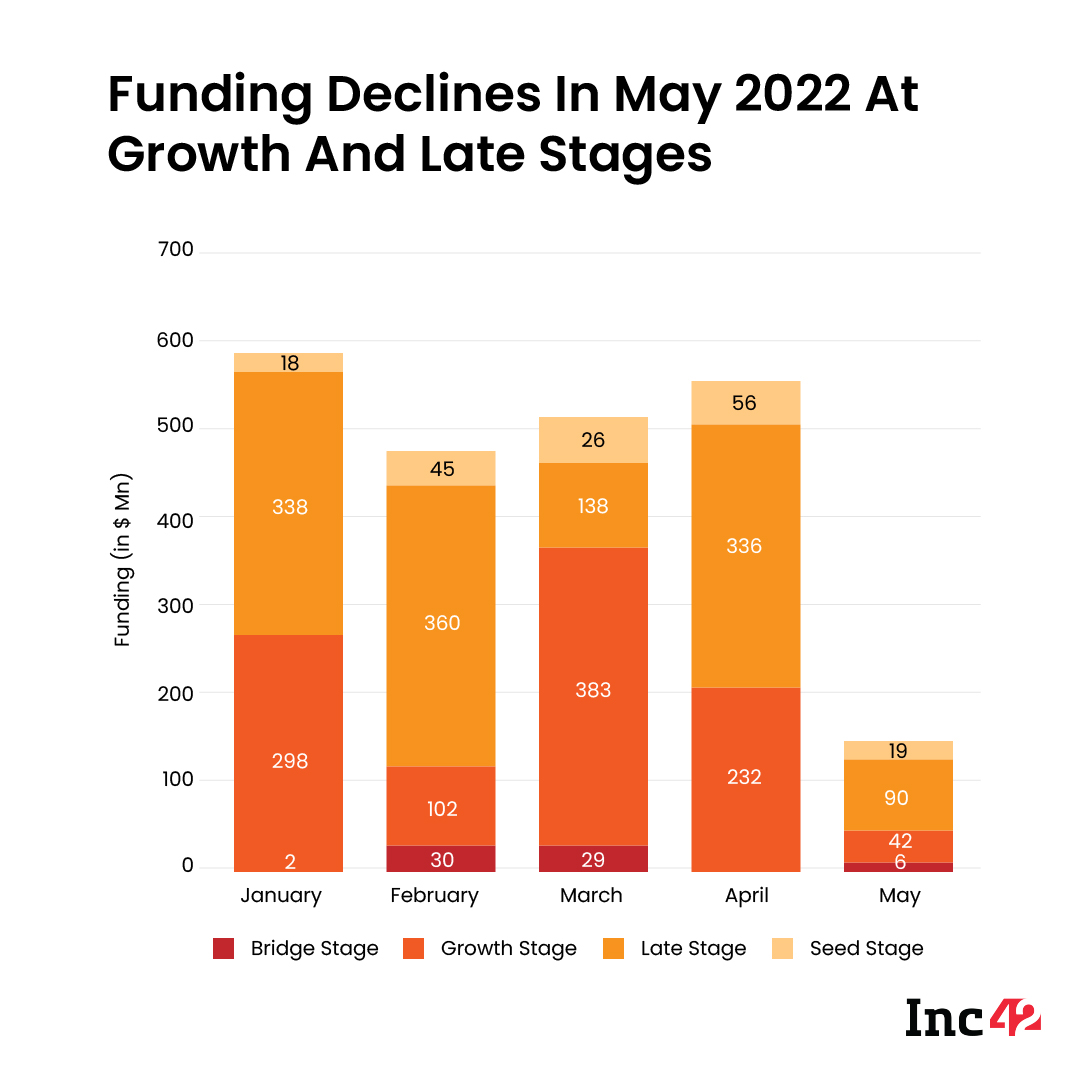 Industry leaders have cited the ongoing global turmoil as one of the key reasons for the funding slowdown. This primarily includes the Russia-Ukraine war, China’s emergency curbs to contain a fresh outbreak of the Covid-19 pandemic, rising inflation and the fear of recession in the US. In fact, private markets are witnessing a trickle-down effect as crashing indices, falling stock prices and shrinking market caps do not bode well for the time to come.

Listed fintech startups in India have also landed in deep trouble. For instance, Paytm has bungled it with a drop of almost 55% while PolicyBazaar is currently trading at a drop of 49% from its IPO price.

Add to that the recent surge in startup layoffs, amply indicating business owners are now going all out for cost cutting and profitability while tightening their belts in anticipation of a funding decline for the next 12-18 months, if not more.

“Tech stock price correction in the US markets and the geopolitical uncertainty (Russia-Ukraine war) have severely impacted the portfolio of multiple crossover funds (funds which invest in publicly traded and privately held companies) with a 40-60% drop in portfolio valuations. To reduce their risks, they are investing cautiously and selectively doing growth stage deals, leading to a crunch in the capital flow available for late stage companies in 2021,” said Rohit Sood, partner at Bertelsmann India Investments, a sector-agnostic venture capital fund.

According to Anup Jain, managing partner at early stage Indian VC firm Orios Ventures, both demand and supply chains have been affected, and new equations are being sought for the period.

“I think this bearish phase will continue for about 12 months, and then we will be on a growth path,” he said.

Which Fintech Sub-Sector Lagged Most In Funding?

Alok Mittal, angel investor and cofounder of Indifi Technologies, a lending platform catering to small businesses, believed that fewer companies would be able to raise funding during this phase, and the amount would be nowhere near the big cheques that the investors wrote earlier.

“Also, a few fintech sub-sectors are likely to take the maximum hit, and payment is one of them,” he added.

Here’s a quick look at the funding distribution across growth and late stages for six key fintech sub-sectors between Q3 2021, and Q1 2022. 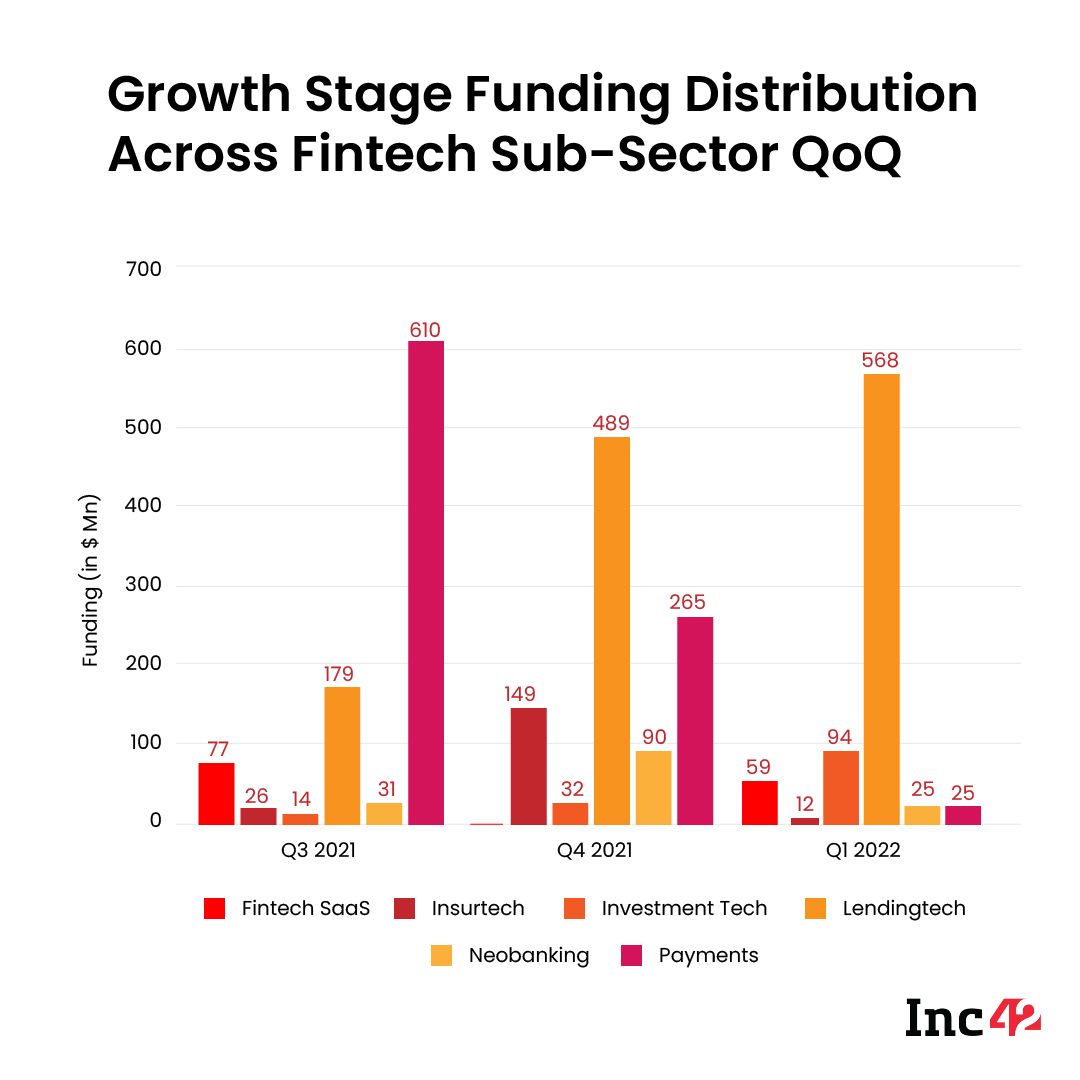 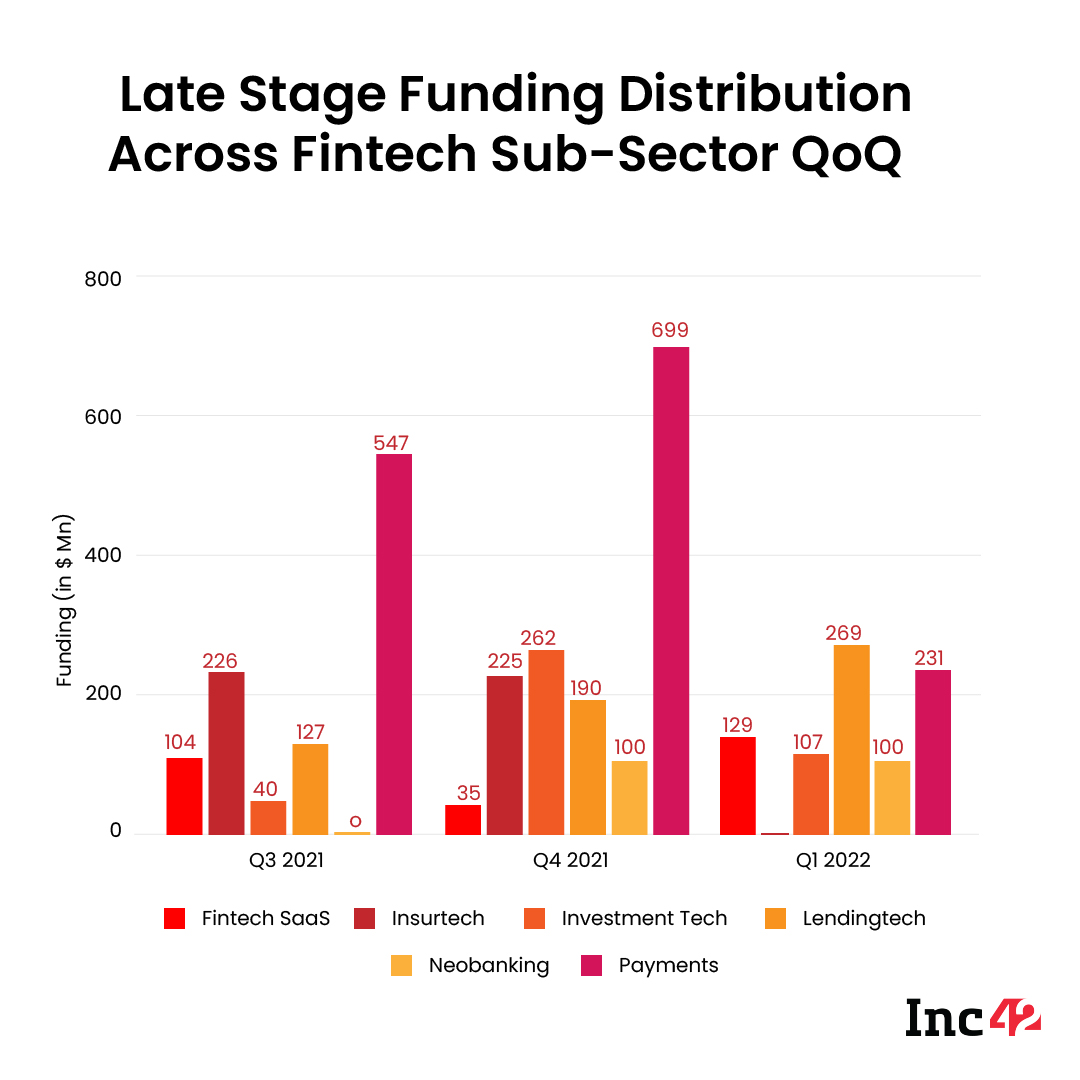 Going by the data, startups in the payment space saw a maximum slide of 90.56% and 66.95% at growth and late stages, respectively, in Q1 2022 compared to Q4 2021. Other segments such as insurtech and neobanking also struggled. Meanwhile, lending tech saw rising values and maximum investor confidence, followed by fintech SaaS and investment tech.

The reason is simple. The more consumer-focussed a sector is, the higher the customer acquisition cost (CAC), which is then offset by volume play. “But Payments is a sector that does not permit fintech players to take advantage of scale due to the Zero-MDR policy. In this case, the transaction volume does not help to sustain the burn,” said Madhusudan of KreditBee.

Neobanking is another sub-sector expected to be badly hit as most companies are still figuring out the business model, leading to more cash burn at different levels.

In contrast, lending always comes with a price attached as interests are charged for loans, and it is a revenue-generating business from Day 1. Similarly, investment tech and insurtech run on a commission-based model, and companies get paid every time a transaction takes place.

“Companies invest a lot in customer acquisition so that, over time, these customers will transact more on payment platforms, take repeat loans from lending platforms or save more to invest via investment platforms. As the value keeps increasing for customer cohorts, this is expected to improve margins and unit economics. But initially, CAC and technology expenses will mainly trigger the cash burn,” she added.

How Will This Downturn Pan Out?

Current trends and sentiments indicate at least six months of bearish phase in the market and a growth pull afterwards. However, Indian fintechs, especially growth and late stage companies, may not get a breather when a bull market sets in. The funding winter may ultimately thaw once the economic contractions are gone. But a 20-30% decline in valuation is certainly expected.

According to Pranav Pai, founding partner and chief investment officer at the early stage VC firm 3one4 Capital, late stage fintech companies will now have to meet critical expectations regarding business model consistency, risk management, monetisation and margins, among others.

“But for some late stage companies, those questions will remain critical. If these are not answered clearly, some may find it difficult to raise funding at the same valuations even if they are market leaders. Again, some companies are not industry leaders, but they are growing well despite a crowded and competitive market. If investors believe their business models, they will continue to fund those companies. Market leaders, too, will attract a lot of interest as they are in a very different orbit. But of course, they have to balance growth and sustainability at this scale,” he added.

The core factors that will now come into play include profitable business models, a growing and paying customer base, better financial literacy and inclusivity across the Bharat market and countering volatility with long-lasting value.

A tall order, indeed. It will push investors to stretch their due diligence from the current two-three months to five-six months or more. And it is bound to result in fewer deals for fintech startups at all stages.

Essentially, no investor will be in a hurry to bring big cheques and indefensible valuations to the table. For early stage investors, the success mantra lies in identifying and betting on the unicorns of tomorrow. For growth and late stage fintechs, the focus will be profitability, innovation and value creation. Failing this, many giants may see their funding and valuations plummet, and VCs may have to mark down their portfolios.

The days of ‘tourist’ founders may be over soon. But considering the solid offerings fintech brings to all stakeholders, founders who build their companies patiently and use their growth capital efficiently need not worry much about a funding winter or an economic downturn.