BYJU’S, BharatPe, Groww, PharmEasy — Startups Are Snapping Up Legacy Cos To Bolster Growth

BYJU’S, BharatPe, Groww, PharmEasy — Startups Are Snapping Up Legacy Cos To Bolster Growth

Similarly, on the fintech side, startups are collaborating with legacy players to help absorb the technical, scaling-up and regulatory challenges to a great extent

Big acquisitions, however, pose stiff challenges, including integration of the legacy companies within the culture, product roadmap and modern processes of a startup

Global corporate history is replete with examples of fledgling companies eclipsing bigger rivals, and in the world of startups, the David vs Goliath folktale is perhaps the ideal allegory.

On the other hand, misplaced confidence about leadership and inferior technology has often proved to be the nemesis of legacy companies in today’s digital-first market.

There is, however, a different dimension to new-age technology companies acquiring their larger counterparts with a traditional approach to business. Here, the synergy is achieved through the diversity of business verticals and additional revenue streams that offline-first legacy companies offer.

The marriage between modern digital capabilities and time-tested traditional strengths had played itself out in India last year through a handful of acquisitions that are slowly but surely putting startups in the driver’s seat in the market.

Edtech startup BYJU’S acquisition of Aakash is a classic case. For any company looking to scale up, M&A is one of the options. Many factors can make an M&A deal interesting. Deal size, brand reputation, reverse merger in some cases, leveraged buyout in some other cases are a few to name. The BYJU’S-Aakash merger is fascinating for a different reason. At $1 Bn, it is, of course, the biggest acquisition by a startup. But it is the alliance between two companies at diametrically opposite poles that made everybody sit up and take notice.

A foremost brand in the edtech space, BYJU’S is focused on preparing students online for competitive examinations, while Aakash has the reputation of a big brand in the traditional test-prep space. Aakash has been around for about three decades, while BYJU’S was founded in 2011. Aakash has about 200 brick-and-mortar coaching centres that attract medical and engineering aspirants from far and near.

The combined entity brings together the diverse strengths and capabilities of BYJU’S and Aakash. Even though the acquisition is barely a year old now, everyone is watching how it is playing out. Now that the threat of the Covid-19 pandemic is diminishing, education is back to offline mode. But there is little doubt among stakeholders that online education will continue to hold good. Digital mode of education is already experimenting with AR and VR for gamification of content delivery. But classroom teaching is not going to die anytime soon. Both conventional players and edtech companies are convinced that omnichannel mode is the future and BYJU’S-Aakash merger is seen as a precursor to that.

The alliance between new-age companies and companies with a traditional approach also help expand the user base, develop new products and capture a new set of audiences. The collaboration can as well meet the crying need for a better education ecosystem.

As edtech rethink their post-pandemic approach, more deals on the lines of BYJU’S-Aakash are probably on the anvil. 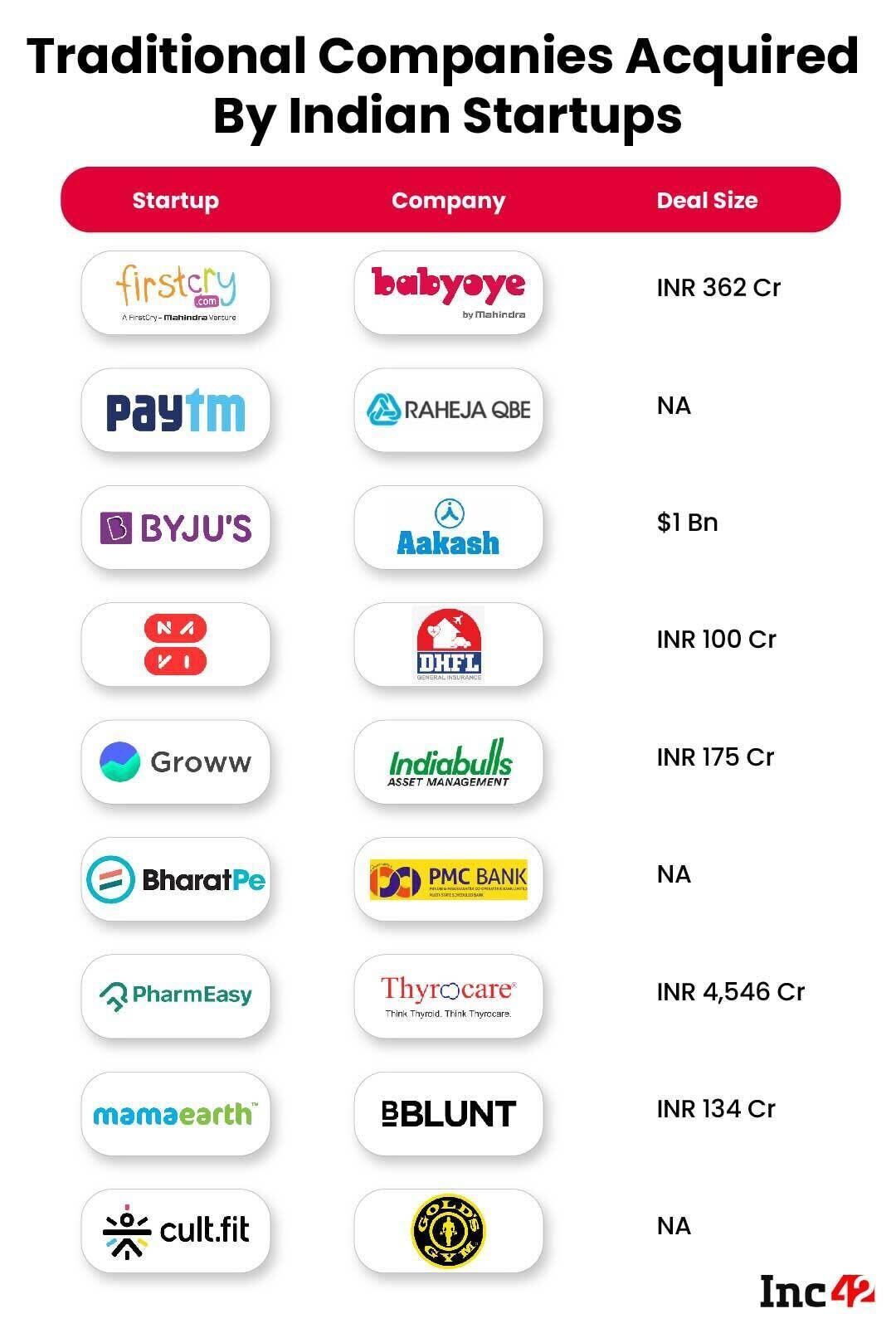 A fintech startup acquiring a full-fledged bank in the cooperative sector is another fine example of synergy through diversity. BharatPe is only three-year-old and a unicorn but bagged a small finance bank licence with an eye on cash-strapped PMC Bank. A seamless merger of BharatPe’s digital capabilities and PMC Bank’s strength in the traditional lending business can be a win-win situation for both.

Another example is investment tech unicorn Groww’s acquisition of Indiabulls Asset Management Company and the trustee company for INR 175 Cr is another case in point. The alliance can leverage Groww’s platform and network of 1.5 Cr customers to launch its own mutual fund products.

BharatPe, which has a 49% ownership in the new Unity Small Finance Bank, signed a JV with Centrum Financial Services, an NBFC, for the PMC acquisition.

“The synergies are quite powerful when it comes to fintechs buying traditional financial businesses. In India, it is difficult to procure a regulatory licence in a seamless and timely manner,” said Rohit Taneja, founder and CEO of Decentro, a full-stack API banking platform. And now banks are becoming more receptive to partnership opportunities, he added.

However, stitching the merger together would require more than just finesse. The recent developments at BharatPe, for example, do not inspire much confidence given the internal power struggle.

Startups such as Decentro and others that are working with large banks and NBFCs help absorb the technical, business and regulatory challenges to a great extent. “This allows banks to focus on compliance and risk while fintechs focus on serving the customers,” Taneja said, adding that as fintech companies become key distribution channels for banks, we will see more collaborations between the two classes.

Wider adoption of payment solutions and fintech companies that offer cheaper solutions is likely to lead to more fintech startups buying out mature BFSI businesses in the coming days.

While sectors such as fintech and edtech are dominated by several large players, the Indian healthtech sector is yet to see the same level of development. While epharmacy is the primary business model, healthtech companies have turned to acquisitions to widen their presence and diversify their revenue streams.

Tata and Reliance acquired 1MG and NetMeds to signal the entry of conglomerates in this potentially massive sector, and then Pharmeasy signalled that even healthtech startups can orchestrate big M&As with its 66% stake acquisition in diagnostics major Thyrocare for INR 4,546 Cr.

Founded in 1998, Thyrocare has a wide network, credibility among healthcare providers and a high brand recall. PharmEasy would have had to spend billions to reach the same scale, but now the IPO-bound startup owns a wide network of diagnostic centres across the country thanks to the deal.

The diversification helps PharmEasy overcome the risks amid intensifying competition. Integrating its online pharmacy with diagnostic services and other B2B services gives the company a lot of bandwidth to scale revenue rapidly.

Siddharth Shah, cofounder and CEO of Pharmeasy parent company API Holdings, said healthtech startups need to be full-stack — offering everything from healthcare information and teleconsultations to diagnostics, distribution and treatment.

The potential for healthtech is augmented further by increased health consciousness among people in the wake of the pandemic. Considering the intense competition for a bigger market pie, diversification and consolidation look imminent. Wellness companies and Ayurveda startups are now seen as embellishments on the segments but they are capable of springing surprises.

Acquisitions by startups typically reflect their aspirations to go full-stack and expand into legacy areas to capture customers that are yet to adopt digital solutions.

Big acquisitions, however, pose stiff challenges, including the integration of the acquired companies into the startup. Investment bankers, academicians and corporate honchos have all cited the integration of two different business philosophies as the biggest challenge. Integration of technologies deployed, consolidation of top management from legacy companies, bringing the people capital and culture together can prove to be a tall order for startups.

Though it is still early to judge whether these acquisitions will pay off in the long run, it’s clear that startups are getting more ambitious after raising millions from private investors. In the case of legacy companies, fundraising is a big challenge too, unless the company pivots to digital solutions.

Startups seemed to have learned a few lessons well from good corporate precedents of relatively small Indian businesses acquiring global companies. The seamless mergers between Tata Steel and Corus, Tata Motors and Jaguar and Land Rover are examples of the same. They could very well serve as a template for startups eyeing traditional companies.