Buried In Losses, Can India’s Ecommerce Marketplaces Ever Find Profitability?

Buried In Losses, Can India’s Ecommerce Marketplaces Ever Find Profitability? 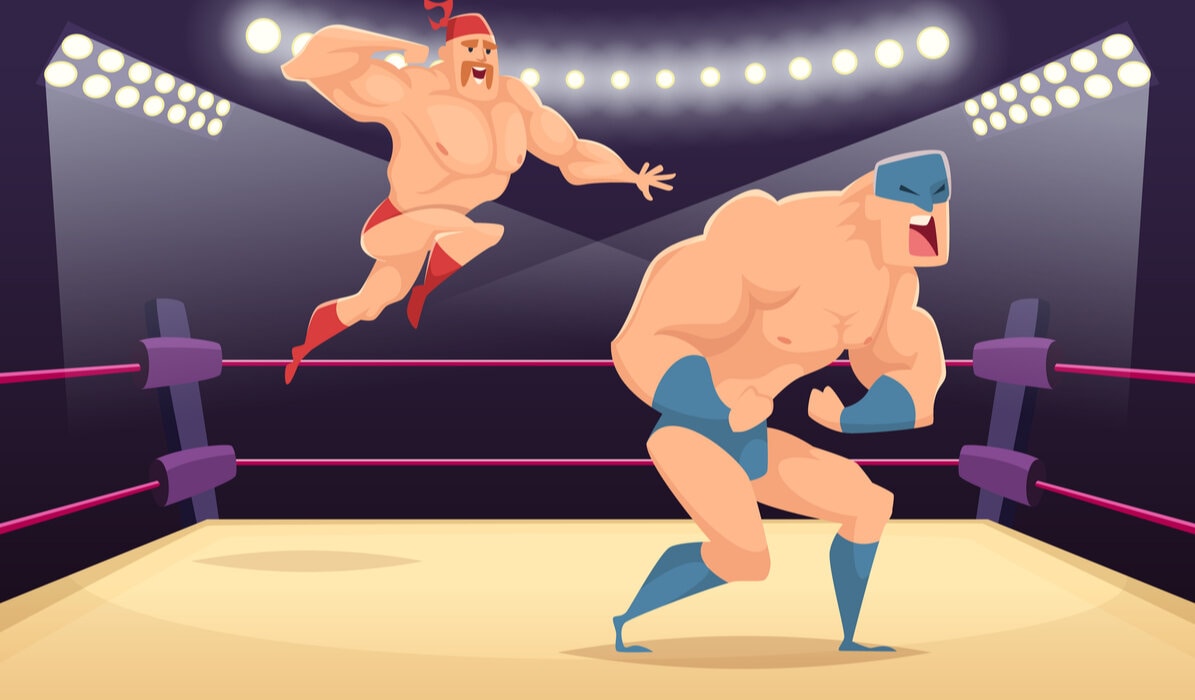 Is any ecommerce company headed towards profitability in the near future based on their FY19 financial performance?

The ecommerce story in India at the moment is one of heavy losses in the billions. Collectively, the four horsemen of Indian ecommerce marketplaces — Flipkart, Amazon, Snapdeal and Paytm Mall — have registered losses of INR 10,879 CR during the financial year 2018-19 (FY19) in India. This staggering amount highlights just how far off profitability the ecommerce sector in India is.

While Amazon India and Flipkart registered a net loss of INR 5685 Cr and INR 3837 Cr, Paytm Mall and Snapdeal observed losses of INR 1171 Cr and INR 186 Cr respectively. This loss-making pattern is in stark contrast to the boom expected in India’s ecommerce sector, which is estimated to be worth a whopping $120 Bn by 2020.

But when you look at the present, none of the ecommerce companies in India has achieved the numbers last year to indicate a move towards profitability. While factors such as rising smartphone penetration, the successful deployment of 4G networks, improvements in digital payments, hyperlocal logistics, analytics-driven customer engagement, digital advertisements and growing consumer wealth, ecommerce platforms have the right conditions for success.

But in terms of financial performance, none of the companies seem to be on track for profitability given last year’s numbers. A straight numerical comparison here would not do complete justice as the capital investment and market penetration of every company is different, but how do we assess who’s doing better?

Despite having a veteran market presence, ecommerce giant – Flipkart registered an increase of 85.9% in losses for the year, as compared to their previous financial year performance. While losses registered by the ecommerce wing of Amazon declined by 9.5% in FY19.

Snapdeal and Paytm Mall registered a decrease of 71% and 34% in the loss generated from their previous financial year performance, indicating a faster inch towards profitability.

Flipkart was established in 2007 and led the new ecommerce boom in India with companies like Snapdeal and ShopClues joining the market. They were followed by US behemoth Amazon, which entered India in 2012.

Since then it’s pretty much been a two-horse race as Snapdeal, ShopClues and then Paytm Mall all took off but struggled to maintain the momentum. ShopClues has been sold off to Qoo10 in the aftermath of this decline, while Snapdeal and Paytm Mall have pivoted to different marketplace models. So for the most part, the competition is largely between Amazon and Flipkart in the Indian context, but Snapdeal and Paytm Mall cannot be ignored given that both have secured a lot of funding and have been present in the market for years.

In a business model such as ecommerce, important financials revolve around inventory management and cash flows. Once the two are optimal, fluctuating parameters affecting profitability can be easily controlled. The health of a balance sheet can easily be determined with the help of some ratios which provide a clearer understanding of the pebble in the shoe.

A balance sheet quick ratio helps determine if the company is investing too much capital in inventory or if it has high short-term debt.

The thumb rule when it comes to good financial performance means delaying payables as long as possible while trying to accelerate the collection of money owed to the company.

In the case of Amazon, the company not only has a stock of inventory but also a high short-term debt component in its total liabilities for the year. Flipkart too follows this pattern.

Following the footsteps of Snapdeal, Paytm Mall has no investments in inventory but an alarmingly high 84.38% of the total liabilities are short-term in nature.

The balance sheet current ratio is a popular metric used to assess a company’s short-term liquidity with respect to its available assets and pending liabilities. In other words, it reflects a company’s ability to generate enough cash to pay off all its debts once they become due. It’s used globally as a way to measure the overall financial health of a company.

This number should ideally be above 1, and it’s usually a sign of strength if it exceeds 2.

While Paytm Mall and Flipkart reflect an extremely healthy score in this aspect at 2.25 and 2.3 respectively, Snapdeal and Amazon stand at 1.61 and 1.33 respectively.

Working capital for a business is the funds it needs for day-to-day trading operations and calculated as the current assets minus the current liabilities. If this number is negative, that means the firm is unable to meet its current obligations.

Amidst the considered ecommerce players, Amazon Seller Services Pvt. Ltd, which runs the marketplace, is the only one with negative working capital of INR 1024 Cr. The rest reflects a positive number with the highest working capital with Flipkart at INR 614 Cr, followed by Paytm Mall and Snapdeal at INR 754 Cr and INR 418 Cr.

Cash flow is the net amount of cash and cash-equivalents being transferred into and out of a business. A company’s ability to create value for shareholders is determined by its ability to generate positive cash flows. The cash flows generated by any business are segregated into three heads – operational, investments and financing.

In an ideal business scenario, cash flow generated from operational activity should be the highest among the three as it is the money generated from the core function of the company. While the other two components act as sources of additional income.

None of our considered ecommerce companies at present have a positive number when it comes to cash flows from operating activities but a lesser loss can give a picture as to which of them are near to an optimal scenario.

Where Are Ecommerce Giants Spending?

While the above parameters give us a clear picture about the health of these companies, it is also crucial to understand the expenses and which one of them is burning the biggest hole in the company’s pockets.

Is there a common factor that is spread across the sector and can be controlled by government intervention? Do the expense components vary for each company as per its business approach?

Critical expenses arising in the ecommerce business model across companies include advertising expenditure, legal charges, finance cost and employee benefit expenses. A reservoir for any other expenditure that does not fit into these heads moves to the “other expenses” account, making it important to be studied as well.

In terms of the advertising spend, Amazon stands with the highest at INR 2331 Cr. Paytm Mall follows with a huge gap at INR 317 Cr and Flipkart at INR 189 Cr. Clearly, Amazon is burning way more money than its competitors here. 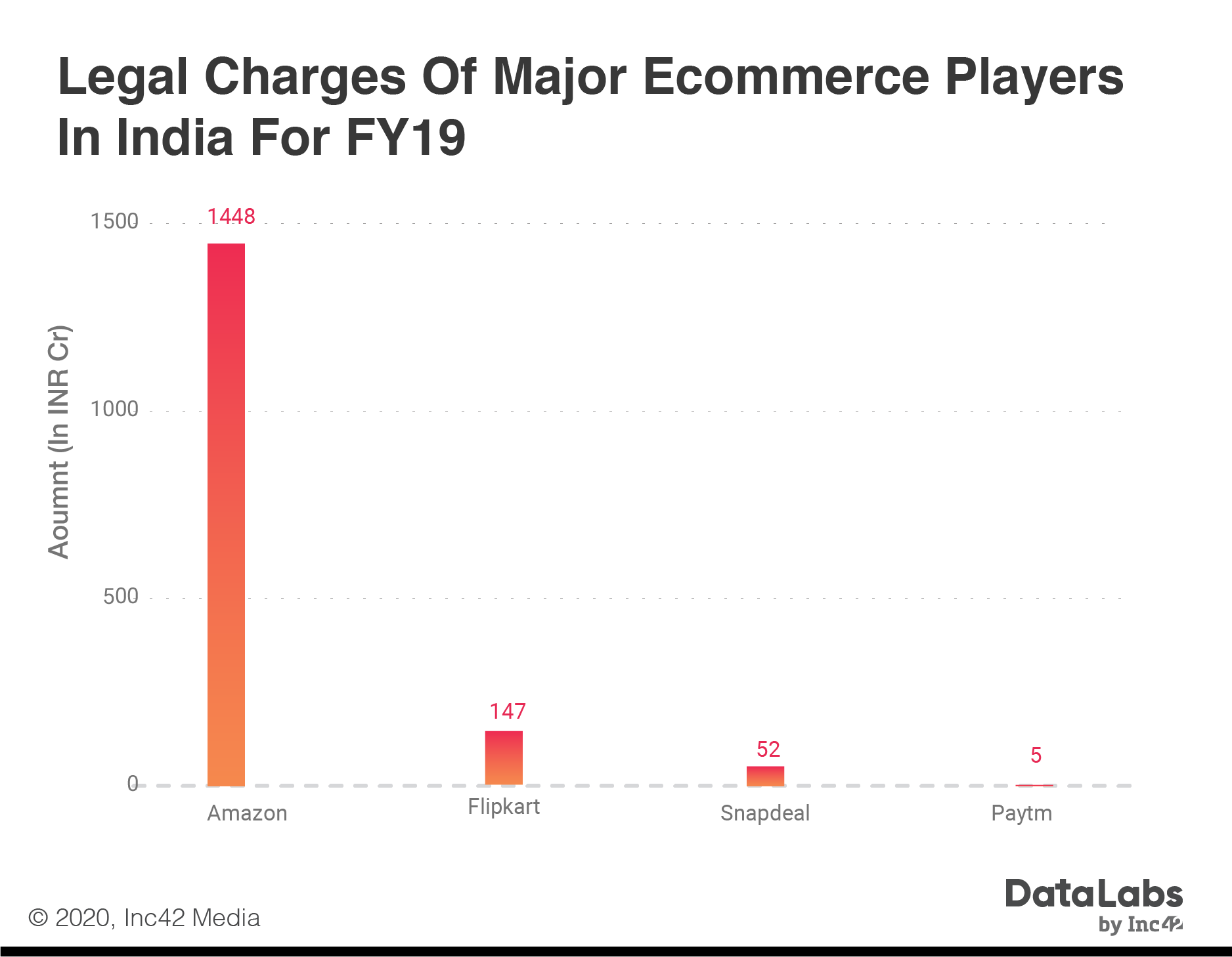 Here, Amazon has spent INR 1448 Cr as compared to INR 147 Cr by Flipkart, a mere INR 52 Cr by Snapdeal and INR 5 Cr by Paytm Mall. The numbers also reflect a true picture of the company’s operating practices. 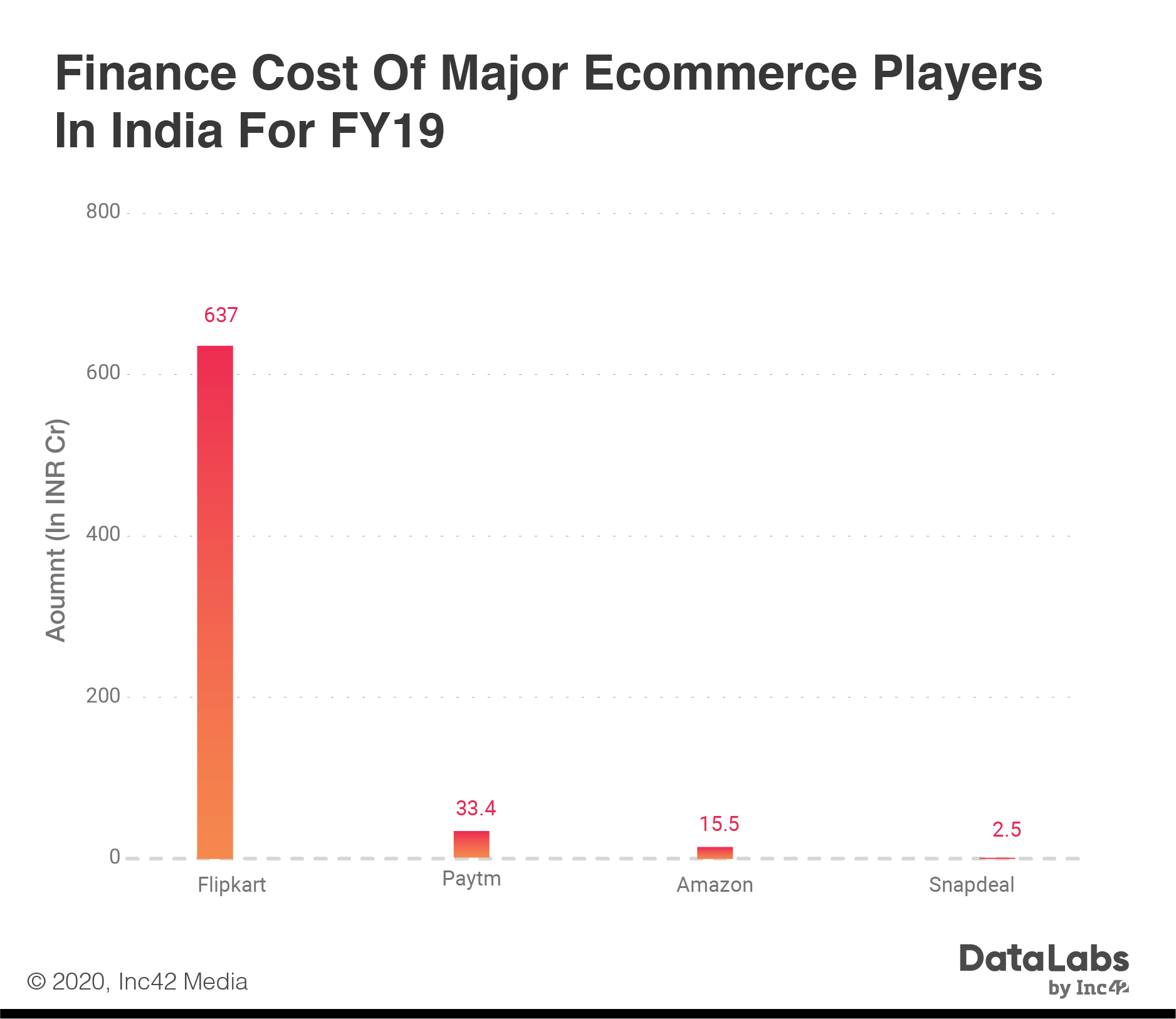 Financing cost is the interest and other costs that an entity incurs in connection with the borrowing of funds. Flipkart leads here with INR 637 Cr, followed by Paytm at INR 33.4 Cr, Amazon at INR 15.5 Cr and Snapdeal with the lowest at INR 2.5 Cr. Any cost element is always better when it on the lower side of the scale. 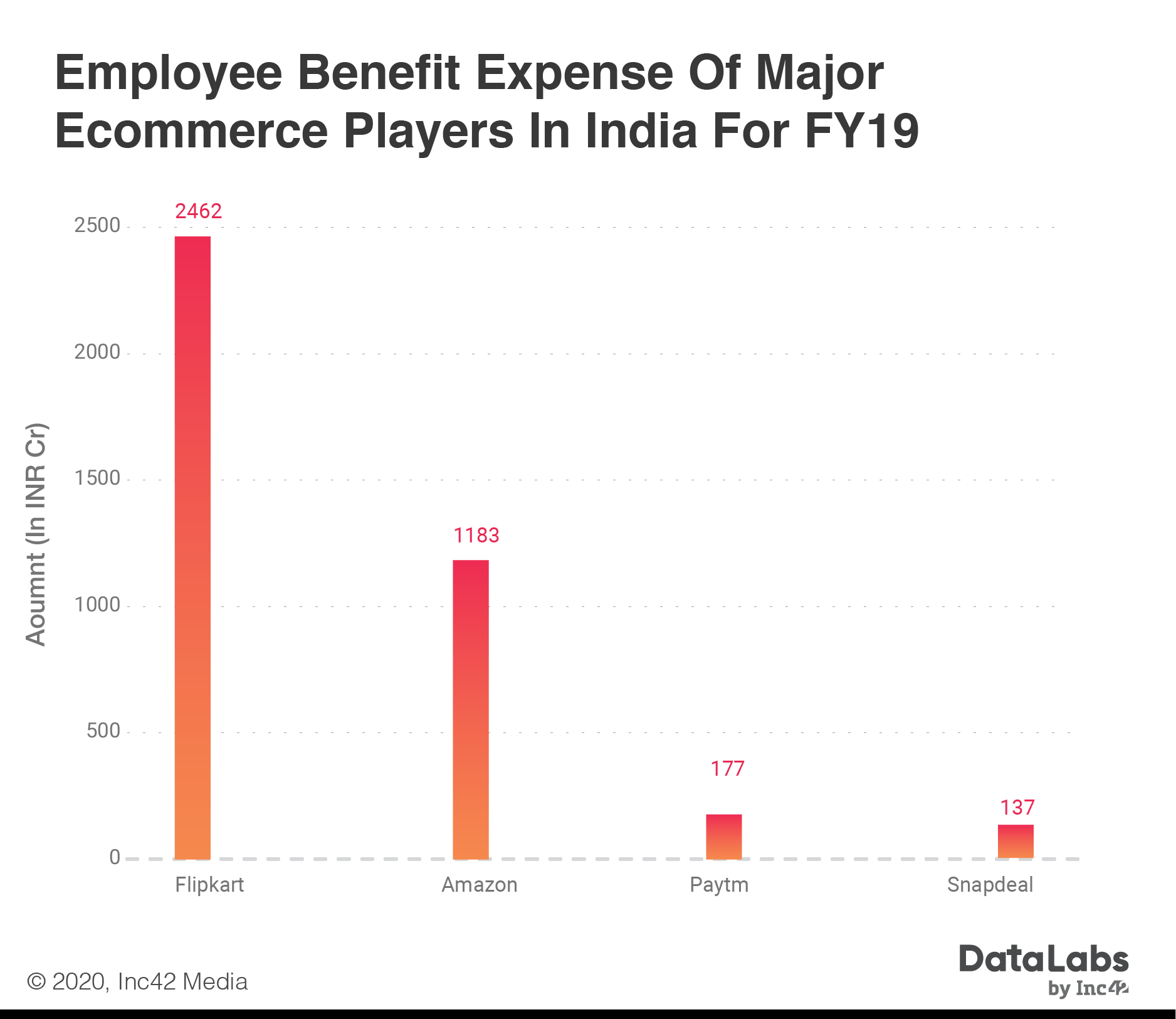 Despite big numbers when it comes to losses for the year, Amazon and Flipkart shelled out INR 2462 Cr and INR 1183 Cr respectively in FY19 under Employee Benefit Expenses. Paytm and Snapdeal followed this pack but are quite behind with INR 177 Cr and INR 137 Cr respectively. These expenses typically include housing, insurance, retirement benefits, bonus payments and more.

Which Ecommerce Player Is Pulling Ahead?

Between Amazon and Flipkart, the latter performs well on the grounds of a good balance sheet current ratio and working capital. Even when we look at expenses, Flipkart is second to Amazon in terms of advertising and legal charges.

The pain point, however, is the high financial cost and employee benefits expense coupled with negative cash flow and high short-term debt, which is common to both the companies.

Among the trailing pack (in market share terms) of Snapdeal and Paytm Mall, the former comes across as a low-risk taker with lower income but even lower expenses. This is perhaps down to the company’s Snapdeal 2.0 strategy that came into effect earlier this year.

Paytm is in a strong position with respect to the balance sheet current ratio and working capital but what it can really work on is the high short-term liability component as a high amount of short-term or current liabilities means that the company is expected to shell out money from the business in the short term, thereby not only losing cash but also the interest component it could have possibly earned.

While all ecommerce companies battle internal financial dynamics to move towards profitability, the Indian government is in plans to set up a regulatory body for the sector, which might impact bottom lines further.

Unfazed by the move, Amazon founder and CEO Jeff Bezos recently told media “Regulatory stability is the thing that we would always hope for India. Whatever the regulations are … they are stable in time and that’s one of the things we’re hoping will now be true. We’ll see,”

The US giant is pumping in over INR 4000 Cr in its various units across India including marketplace and food retail to provide them more ammunition to compete against Flipkart. But how much of that will be spent on customer acquisition and retention through discounts?

For now, it’s time to see how India’s largest companies deal with regulatory clouds and their own burgeoning expenses to carve a path towards profitability.