Budget Sops Showstoppers For Media And Entertainment Sector, But Will They Have Special Effects On Startups?

Budget Sops Showstoppers For Media And Entertainment Sector, But Will They Have Special Effects On Startups? 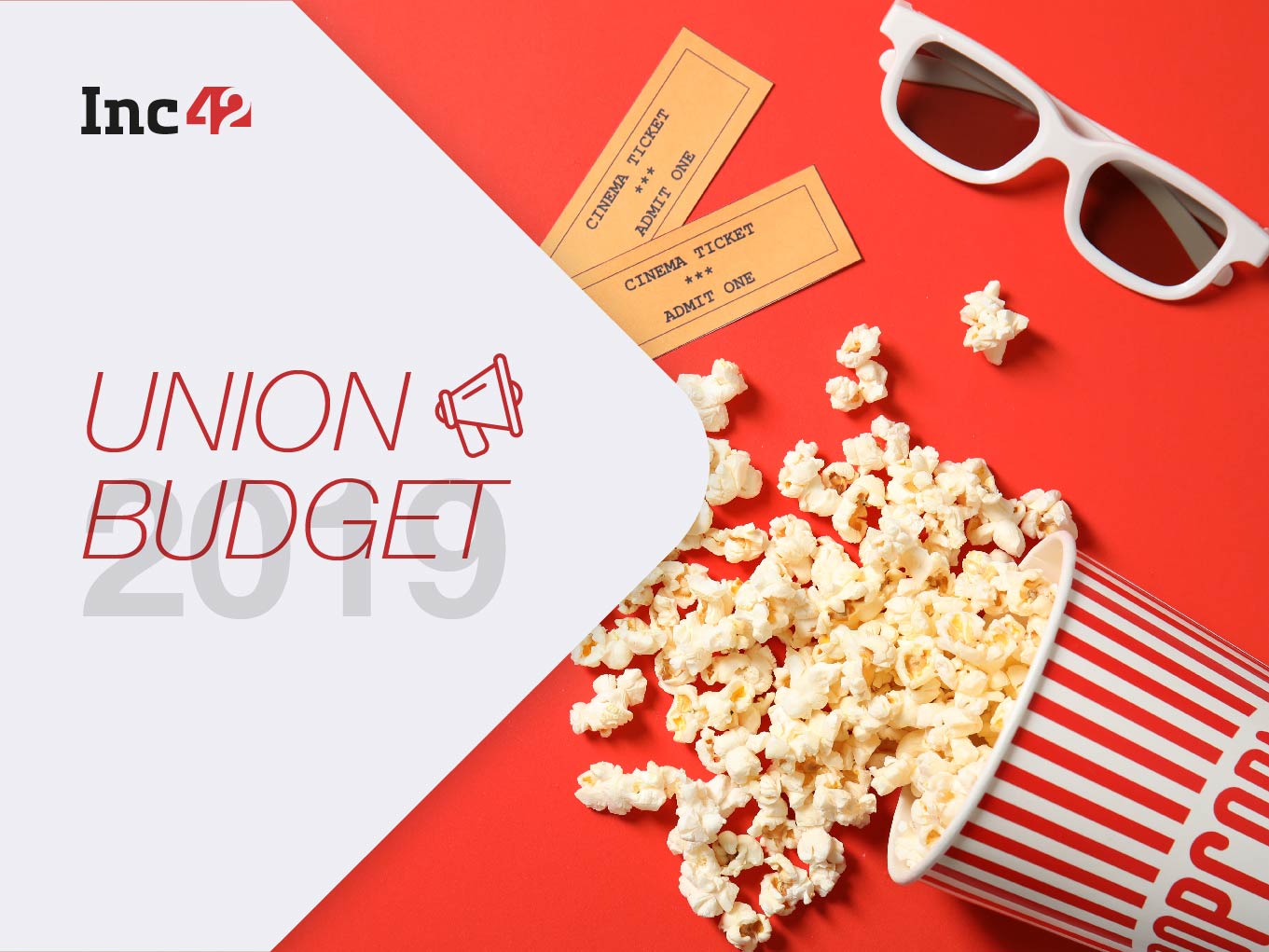 The single-window clearance for Indian filmmakers is sure to boost local content creation, drawing more users

Reduction of GST on movie tickets to benefit ticketing startups like Bookmyshow, Paytm and others

While lauding the inspiration and fervour of the Aditya Dhar-directed ‘Uri: The Surgical Strike’ released on January 11, interim finance minister Piyush Goyal made a few important announcements in his Interim Budget speech that made the media and entertainment industry (especially Bollywood) sit up and smile.

Of course, this was expected, given the recent meetings between PM Modi and leading Bollywood stars, followed by selfie posts on social media. With General Election round the corner, even the PM can hardly ignore the clout and influence of Bollywood, but that’s a story for another time.

That’s one part of the story. The other part is that the industry’s contribution in terms of jobs is valuable to India — as of 2017, the media and entertainment (M&E) industry combined employed over 3.5-4 Mn in direct and indirect jobs. A 2017 report states that the entertainment industry will add another 7-8 lakh new jobs over the next five years. Besides, over the top (OTT) players such as Netflix, Hotstar, etc, are becoming household names in India. A 2017 BCG report said that the OTT market, which stood at $0.5 Bn in 2017, will grow to $5 Bn by 2023.

Here are the announcements made by the interim finance minister for the media and entertainment industry of India:

Naturally, the film industry welcomed the proposed changes with a flurry of tweets and appreciation.

Filmmaker Madhur Bhandarkar tweeted: “Welcome move by @narendramodi Government for initiating Anti-Camcording provision in the Cinematography Act to fight Piracy and Single window clearance for Film Shootings. This will help the Film Industry in a Big Way.🙏#Budget2019”

Good News For Media And Entertainment Startups Too?

While the single-window clearance and the anti-camcording provision in the Cinematography Act will not directly impact startups, they will definitely have a long term and an indirect impact on the sector. India is yet to see homegrown startups in the growth stage in this industry — their scope so far has been limited to the content side and not expanded to production. Also, the enforcement framework and timelines of these changes have not been made clear yet.

However, startups that are mushrooming in this space are sure to benefit in the long term. Here’s how:

The entertainment industry is a major employment generator and the single-clearance window for filmmaking will benefit filmmakers across the country — irrespective of whether they are from Bollywood, Tollywood, and even OTT players like HotStar, Voot, and AltBalaji.

It’s interesting to note that thanks to the single-clearance window for foreign filmmakers, global OTT giants like Amazon Prime and Netflix are already producing movies in India. However, due to lack of such a clearance for Indian homegrown players until now, Hotstar, Voot, etc, were left out in the cold so far.

The move will enable Indian streaming services to offer more India-centric content by Indians, resulting in a greater number of users.

According to a recent report by EY released in 2018, the media and entertainment sector touched INR 1.5 Tn in 2017, a growth of almost 13% over 2016. According to another study by  Assocham and PwC, the Indian media and entertainment industry is estimated to touch $52,683 Mn (around INR 3.73 lakh cr) by 2022, led by increasing disposable income, rising population, and content consumption across formats.

This space also is a major employment generation. A Boston Consulting Group (BCG) report from 2017 said that the M&E space has the potential to generate as many 7-8 Lakh jobs in the next few years.

The reduction of GST on movie tickets will find a direct impact for startups like BookMyShow, Paytm, Insider, Ticketplease, and others. This will help increase the margin of profit from each ticket sold by these startups.

As per an article by ET, BookMyShow’s monthly sales of tickets on its platform is more than 10 Mn. This gives the startup a monthly increase in profit by INR 1.5 Cr and annual profit by INR 18 Cr — certainly not a small number.

What Is ‘Single-Window Clearance’?

Until now, an Indian filmmaker shooting at a public place had to seek permission from multiple bodies — the local police, municipal bodies, the fire brigade, state government departments, and central government departments. This is a long-tailed process involving close to 35 permissions from various agencies before the shoot of a film or a TV serial. This has been a major roadblocks for Indian independent and low-budget filmmakers as the cost incurred in procuring the permissions is substantial.

In 2015, the Indian government set up a single-window clearance system for foreign filmmakers to shoot in India. However, it was not available for Indian filmmakers. The announcement that the facility is now extended to Indian filmmakers as well will encourage domestic filmmaking and boost jobs and employment in the sector.

The Rise Of Homegrown OTT

The introduction of the anti-camcording provision in the Cinematography Act will enable homegrown OTT services like Hotstar and Voot to increase their user subscriptions. Piracy has been a major challenge for such companies because a large number of viewers just opt for pirated shows and movies as they are cheaper than subscription prices.

Now, with the anti-piracy rule in place, this section of users will no longer be able to access pirated movies or shows and a large number of them are likely to move to OTT players.

We have already seen a rise of comedy and satirical content in the last three years with companies like TVF, AIB, Arre, Talking Mimes and many more. They were more restricted towards standup comedy and viral content. Now, with single window clearance, they will have more degree of freedom to venture into various formats of filmmaking and content creation.

Of Films And Wanderlust

Another indirect impact of the single-window clearance for filmmaking would be a boost in domestic tourism. As observed, travellers often flock to exotic locations in different countries where international movies are shot. Domestic filming across India is also likely to make indigenous locations famous and attract tourists. In 2017, The tourism industry contributed $234.03 Bn to India’s GDP.

New Zealand, for instance, witnessed a 17% rise in visitor spend the year after Lord of the Rings: Fellowship of the Ring was released. After the release of Zindagi Na Milegi Dobara, which was shot in Spain, there was a 35% rise in overall visitors to the country in the first half of 2011. Clearly, there is a direct correlation between the entertainment industry and tourism growth.

Not Quite The Perfect Picture, Though

While we laud the positive impact of the changes introduced in the Union Budget for the M&E sector, especially on tourism, we also need to be aware of the cons of making indigenous spots open to tourists.

Tourists flocking in large numbers to popular places often have a detrimental effect on the ecological ecosystem of the place. Consider, for example, the adverse effect on Ladakh’s fragile ecosystem after the release of the movie 3 Idiots in 2008. Pangong, the shimmering, turquoise 125km lake that served as the backdrop for 3 Idiots’s soaring conclusion, rose to unprecedented popularity after the movie was released.

Today, plastic bottles float down Leh’s once-pristine canals. To attract tourists, campsites have put up western bathrooms, which, in just a few years, have replaced traditional Ladakhi dry compost toilets, draining the region’s scant water resources. Tourists toss chips and crackers to marmots and brown-headed gulls. Damage to local species, many unique to the region, is one of the biggest concerns of ecologists today.

Surely, while we have much to appreciate about the single-window clearance for filmmaking in India, the government must also recognise the need for a framework of checks and balances to mitigate the possible harmful effects.