Countdown To Budget 2020: The Top Demands From India’s Startup And Investor Ecosystem

Countdown To Budget 2020: The Top Demands From India’s Startup And Investor Ecosystem 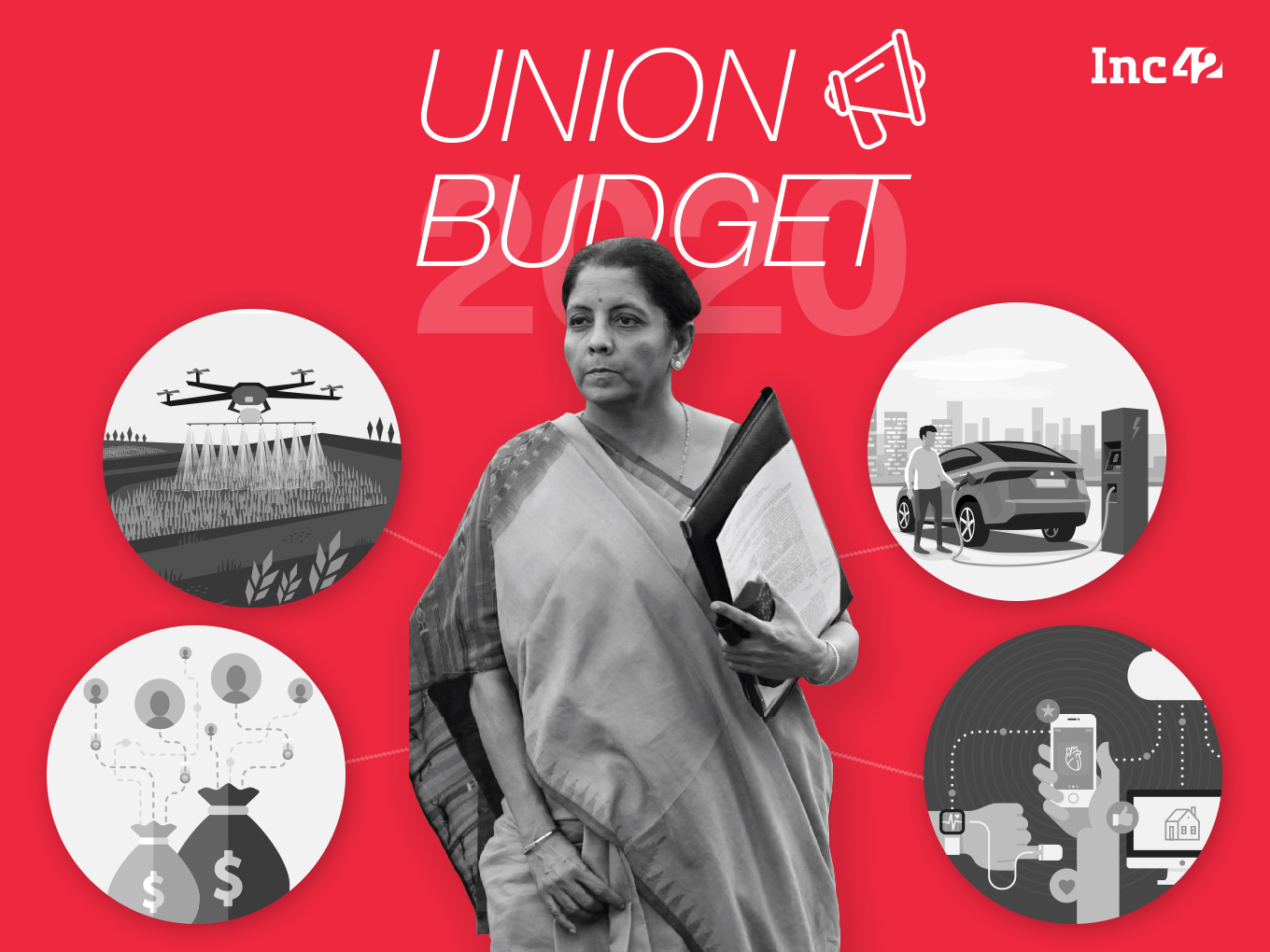 Govt needs to create a dedicated innovation fund in every sector, demand startups

Some of the policy reforms be it GST, Zero MDR or angel tax removal, need more clarity

It’s January 28 and we are just days away from the Union Budget 2020, which is said to be the biggest challenge for the Narendra Modi government.

In the last one month, we have published a dozen articles discussing segment-wise demands and expectations and as we saw in our Budget 2020 preview series, industry stakeholders want some big reforms — “as big as the 1991’s financial reform,” as one investor told us —  that could address the ongoing economic slowdown.

As the industry is expecting a tilt towards demand-side policies, people are expecting an increase in the basic exemption limit of INR 2.5 Lakh for individuals and increase in the income limit at which the maximum marginal rate of 30% kicks in.

Hitesh D Gajaria, partner and cohead, tax, KPMG India said “Our pre-budget survey indicates that rate cuts for individuals are the most wanted item for everyone. This is in line with expectations that lower tax rates for individuals, along with the corporate tax rate cuts enacted last year, will boost spending and investment in the economy.”

But, that’s about the lowest common denominator which was discussed in detail in our very first article, as it is applicable for all sectors. As we come to the end of the Pre-Budget 2020 series, let’s take a look at the segment-wise demands of startups, investors.

Based on further conversations with startup founders and investors, we have curated the top priorities for startups and investors. Let’s take a look!

Innovation Fund For Every Emerging Market

While NASSCOM asked the government to “create a deeptech fund of INR 3K Cr for investment in deeptech startups over the next five years,” startups have demanded to create a dedicated innovation fund for every sector especially in the areas of healthtech, edtech and agritech.

“We hope to see more dedicated fund of funds. They can serve as a boost in the arm for specific sectors we want to encourage in India, particularly manufacturing and deeptech.” – Utkarsh Sinha of Bexley Advisors

India is far behind in terms of patents per capita. According to the draft National Education Policy 2019, India severely lags behind in the number of patents and publications produced — according to the World Intellectual Property Organisation (WIPO), China made as many as 13,38,503 patent applications, with just 10% being made by non-resident Chinese, the USA made 605,571 patent applications, while India made a mere 45,057, of which over 70% were by non-resident Indians.

It’s clear that India needs a dedicated innovation fund to drive R&D, innovation in every sector. Ajit Narayanan, CTO and cofounder of healthtech startup mfine said that startups have a chance to lead the next wave of the technological revolution created in India. Building a strong foundation in technologies such as AI, Robotics, AR/VR, Autonomous systems and space exploration and more are going to be key factors.

Other than the usual expectations of making tax assessments and compliance easier for startups, he said, “I certainly hope that the budget focusses on setting up of technology hubs and more world-class training institutions to make up for the skill deficit in these areas. To build a stronger long term foundation in technology, focus on grants for scientific research to fuel exploration of future technology areas are also essential. Policies to fuel ethical usage of data for AI and favouring the usage of AI and Mobile technology specifically in healthcare are also on my wishlist,” he said.

The government needs to disburse the full Fund of Funds for startups (FFS) worth INR 10K Cr, Aarin Capital cofounder and chairman TV Mohandas Pai told Inc42. It is worth noting that the FFS is not invested directly into startups but through registered alternative investment funds (AIFs) and these AIFs often take their own time in shortlisting the startups and rightfully so, as finding suitable startups to invest in is no easy job.

Running behind the schedule, investors, startups agree on the fast and full disbursal of the fund of funds, so that AIFs can invest the same by the end of 15th finance commission cycle in April 2025.

Other funds are also not being utilised to its strength. Ayush Mishra, CEO and cofounder of Tattvan E Clinic pointed out that as an emerging economy, India has a considerable expenditure when it comes to telemedicine. More than INR 1700 Cr is dedicated to the growth of telemedicine in the country by the government of India. “What is lacking is the proper utilisation of the funds allocated by the state within the desired time frame. There is a long drawn process which leads to the delay ultimately causing the allocated resources and capital to lapse. The way forward is to have proper guidelines in the field of telemedicine to ensure proper channelisation and utilisation of the funds allocated in the next budget.”

Besides, BJP had also promised to create a seed fund worth INR 20K Cr. Now, startups want the Modi government to walk the talk.

The government has announced zero merchant discount rate (MDR) for businesses with annual turnover of more than INR 50 Cr, for UPI and RuPay transactions. While some experts believe that this will unnecessarily add unfairness among major players such as Visa, Mastercard and RuPay, others say zero MDR would help encourage consumers to adopt digital payments more freely.

Commenting on the government’s decision to implement zero MDR on Rupay and UPI payments, Vishwas Patel, chairman, Payments Council of India & director, Infibeam Avenues said, “The prohibition on the charge of MDR on Rupay and UPI would kill the industry and make the business model unviable. It’s like nationalization of the payments industry. There would be a significant negative impact on the payment ecosystem – innovation, job losses and a slowdown in the expansion of the digital payments in India.”

But who will step up to bear the cost?

While zero MDR is an issue, majorly with the fintech players. GST, even after two-and-a-half years after launch and a series of amendments, there is a discontentment over the slabs, returns filing, etc.

Satya Prabhakar, CEO & founder, Sulekha.com told Inc42, “In the next 10 years, $4 Tn could be added by the services sector which currently has nearly 16 million SMEs. These service SMEs are the real engine driving our country’s economic growth and the Union Budget 2020 should seek to address the challenges faced by them head-on. Some ideas include better access to credit through subsidies for repaying loans on time, reduction of GST for marketing investments, subsidised training programs, and occupational insurance for workers in hazardous jobs. To achieve India’s vision of a $5 Tn economy by 2025, it is essential to mobilize the development of SMEs in the services space.”

Amid revenue shortfall of around INR 2.5 lakh crore while the central government is struggling to pay SGST shares back to the states, making India a $5 Tn economy seems to be a distant dream. For the instant bailout, the government has once again looked up to RBI, however, the question is how long? Sooner the better, it will have to rehabilitate the supply-demand cycle for the revenue generation.

And, for this, addressing basic issues of joblessness, consumer spending, MSME slump, skill development and digital infrastructure on an urgent basis is a must.