Work on the collaboration began in earnest six or eight months ago, said Bira 91 founder and CEO Ankur Jain

From creating a new category to becoming the reference point for your competition, the biggest Indian D2C startups have had an eventful ride. Startups such as boAt, SUGAR Cosmetics, Bira 91, Nykaa, Bewakoof, Lenskart, Rebel Foods and others have become benchmarks for today’s D2C players. Their success has validated ideas for entrepreneurs that followed and emboldened newer players to enter the market.

With competition growing in nearly every D2C category today, established names are turning to collaborations and partnerships to drive home their advantage. The latest to hit the scene is Bira 91’s collaboration with boAt to launch a ‘BOOM’ audio collection that combines the Bira 91 brand colours with the electronic brand’s audio expertise.

The limited-edition headphones and Bluetooth speakers will be sold through Bira 91’s merchandise store and the boAt website and has gone on sale from today, January 20. Admittedly a brand collaboration itself is not unique, particularly for Qualcomm-backed boAt, which has had tie-ups with Marvel properties and Indian Premier League teams in the past. 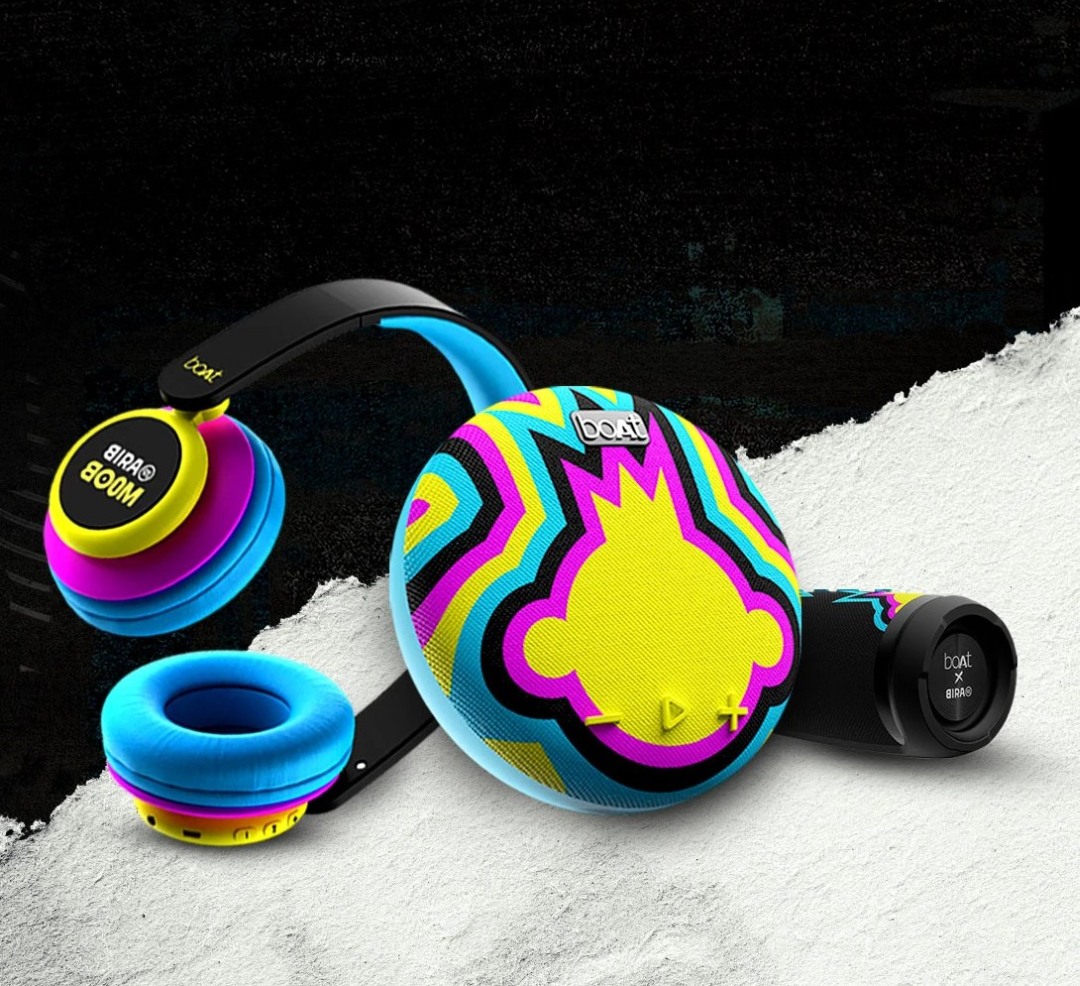 But for boAt cofounder Aman Gupta, this one is special because it is about celebrating two pathbreaking brands that disrupted big sectors and have competed against major international players.

“Like boAt, Bira has also disrupted a category that nobody had imagined an Indian company could. We have both shown India that you can think beyond just global brands,” boAt’s Gupta told Inc42.

A Celebration Of Indian Brands

Gupta also pointed out that like Bira’s monkey iconography, which has been copied by most new beer brands, boAt has also seen plenty of inspired brands in the market. The product line-up is largely about celebrating what’s unique about both the brands.

Indeed, from a design point of view, the limited edition products stand out among a sea of plain black speakers and headphones. Bira 91’s bright yellow, pink and blue brand colours stand out immediately on the smaller speakers and headphones, while the larger speaker has a more subtle paint job. Yet the colours are unmistakably Bira, and the products also carry the ‘Boom’ label under which it sells beers.

Work on the collaboration began in earnest six or eight months ago, said Sequoia-backed Bira 91’s founder and CEO Ankur Jain, adding that the idea first came to him several years ago, when he first met Gupta. Besides knowing each other as entrepreneurs, the two also have a family connection through Jain’s wife.

Jain added that Bira 91’s role was largely around trying to find a seamless way to bring the two brands together, visually speaking.

“I think, from a values and customer profile perspective, as Aman said, we are completely aligned. So I think our (Bira’s) expertise probably came in the form of the visual design language, while Aman and his team took care of what they know best, which is sound and industrial design.”

The Bira 91 CEO added that over the years, Bira itself has had to distil its brand imagery, typography and iconography. In a way, just the colours are enough of an analogue for the brand name. “We have continually removed stuff from it and made it more essential from a visual perspective.”

The companies declined to share the revenue-sharing details behind the collaboration, but the marketing and promotion costs will be borne jointly by both.

The Make In India Story

Gupta added that it’s also pertinent to note that both companies are also contributing more significantly to the ‘Make in India’ story. The electronics company has signed a deal with contract manufacturer Dixon to design and manufacture its wireless audio products in India.

Bira has five factories in India over 100 acres total and 100% of the company’s products are made in India, Jain said. It exports beer to 20 countries. During the early days of the pandemic, Bira’s outbound supply chain was disrupted, which has since then eased.

Similarly, boAt too faced a supply chain crunch, but this was in sourcing parts and components for its products. Gupta believes that the biggest learning for boAt has been to diversify the supply and procurement to avoid not just the disruption from future pandemic waves but any kind of impact. Now with partners such as Qualcomm and Dixon, Gupta is ready for the next phase of boAt’s evolution, which is close to a public listing.

The Delhi-based consumer electronics company is set to become the first Indian D2C brand to file for an IPO. As we reported last week, the startup is aiming to raise INR 2,000 Cr and will file the DRHP with SEBI later this month.

According to Inc42 sources, the IPO offer will include fresh issue of shares worth INR 1,000 Cr and offer for sale worth INR 1,000 Cr. The company has roped in Credit Suisse, Bank of America, Axis Bank and ICICI Securities to manage its IPO. The previous financial year (FY21) saw boAt crossing INR 1,500 Cr in revenue.