While the fintech market is poised to reach $1.3 Tn by 2025, the immediate future is not so rosy as the startups in the sector saw a sequential decline in funding in March quarter

A NewsVoir report recently outlined that India has the highest number of fintech adopters in the world at 87% compared to the global adoption of 64%. Currently valued at $584 Bn, India’s fintech ecosystem is likely to reach $1.3 Tn by 2025. The opportunity is big, but the funding numbers echo the woes of the startups operating within the ecosystem.

The year 2021 was an eccentric one for the fintech economy, with funding going through the roof and the startups raising almost $8 Bn. However, this doesn’t seem to be the case in 2022. 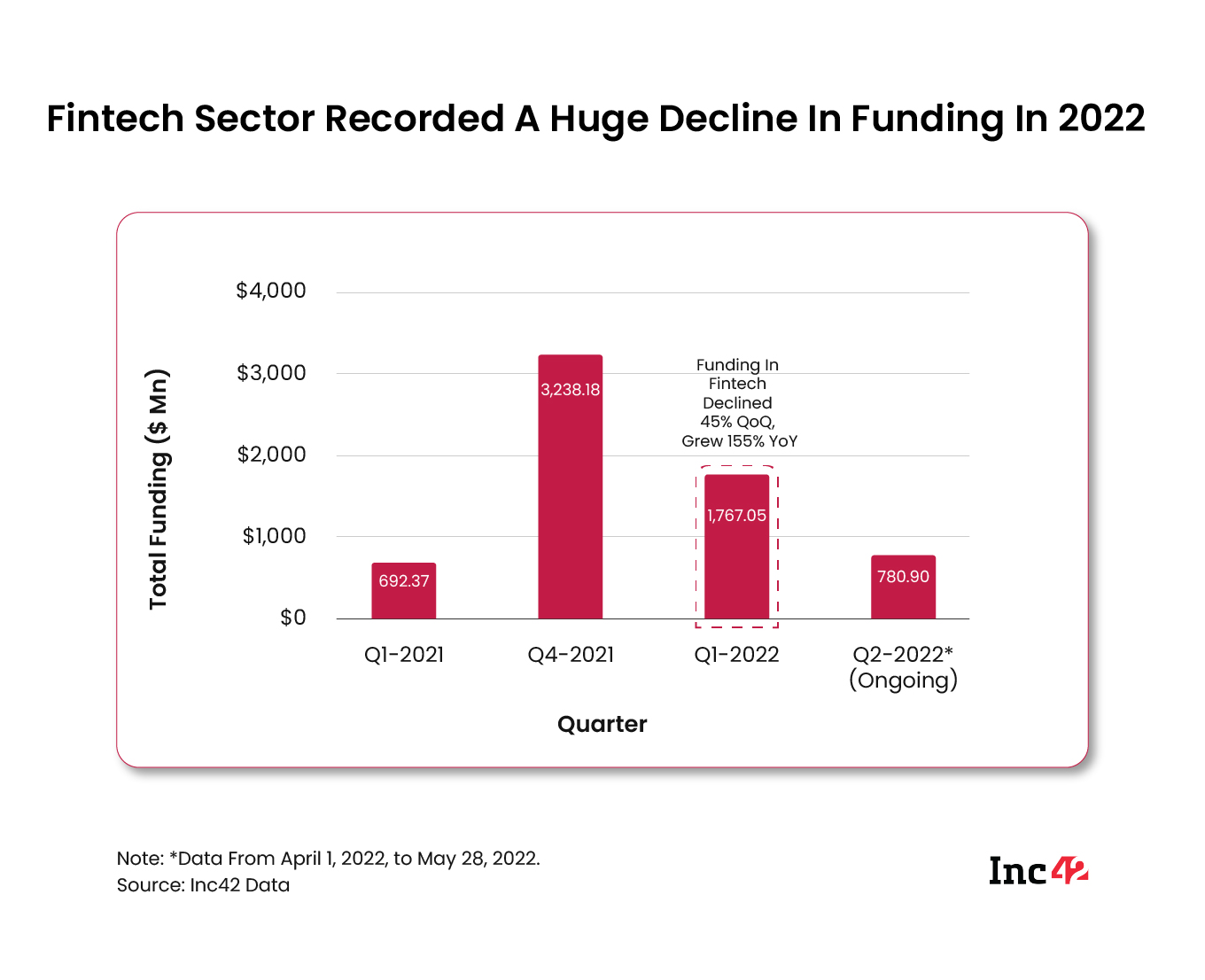 Seed stage fintech startups outperformed their larger peers, with funding growing 17% QoQ (only stage to report growth) in Q1 2022 to $1.8 Bn. On the other hand, growth and late-stage startups saw a considerable decline on a QoQ basis. 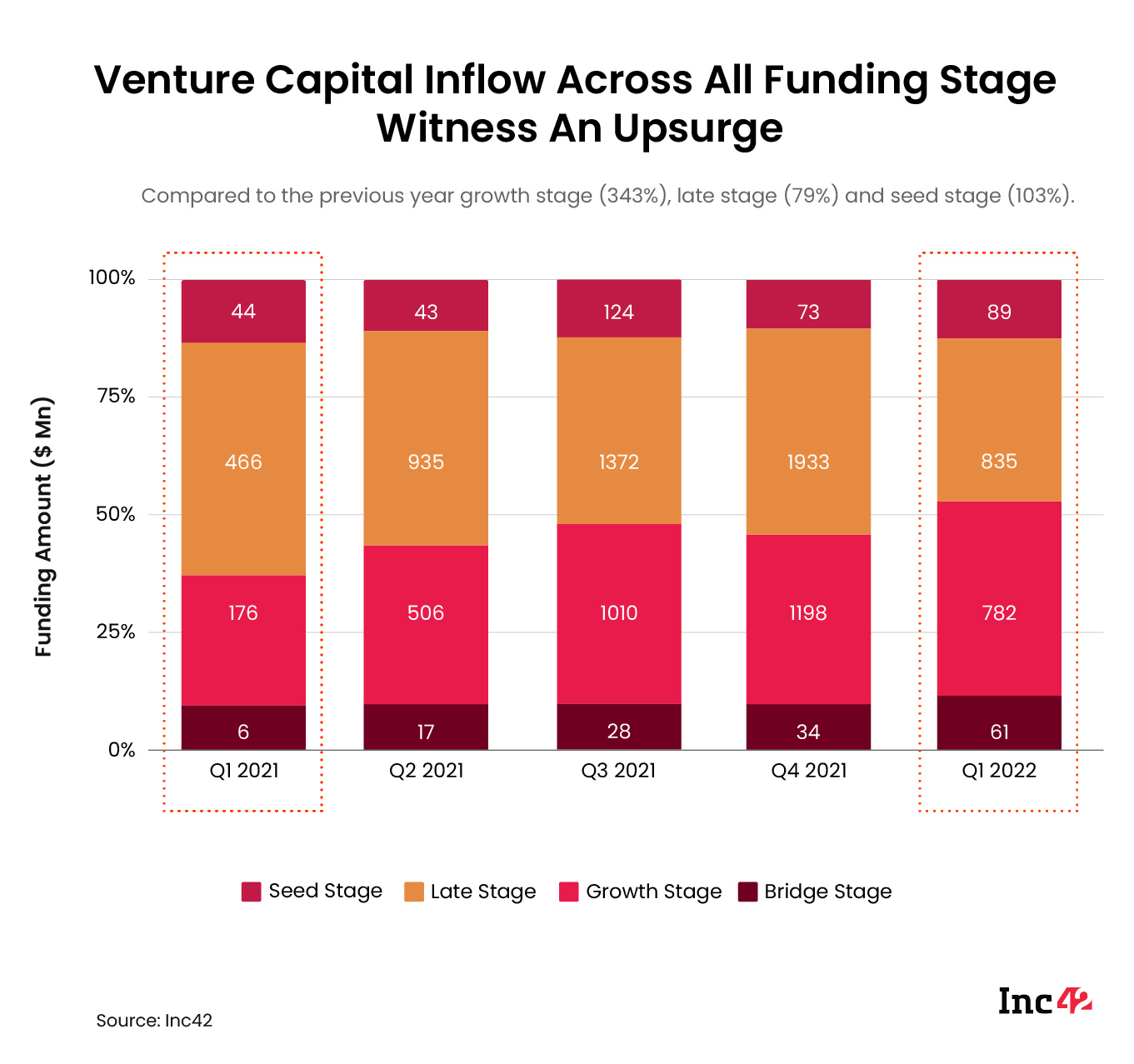 Between January and May 2022, growth stage fintech startups raised a total of $1.055 Bn. Of this, $782 Mn was raised in the January-March quarter, a decline of 35% from the preceding December quarter of 2021.

It must be noted that while there has been a sequential decline in overall funding raised by fintech startups and stage-wise funding in most of the cases during the March quarter, the funding did rise on a year-on-year (YoY) basis.

India had over 4.2K fintech startups as of May 2022 which have together raised over $22 Bn in funding since 2014. One of the two top-funded sectors in 2021, the fintech sector boasts of 21 unicorns and 31 soonicorns, with a combined valuation of $64 Bn+ and over $12 Bn, respectively. 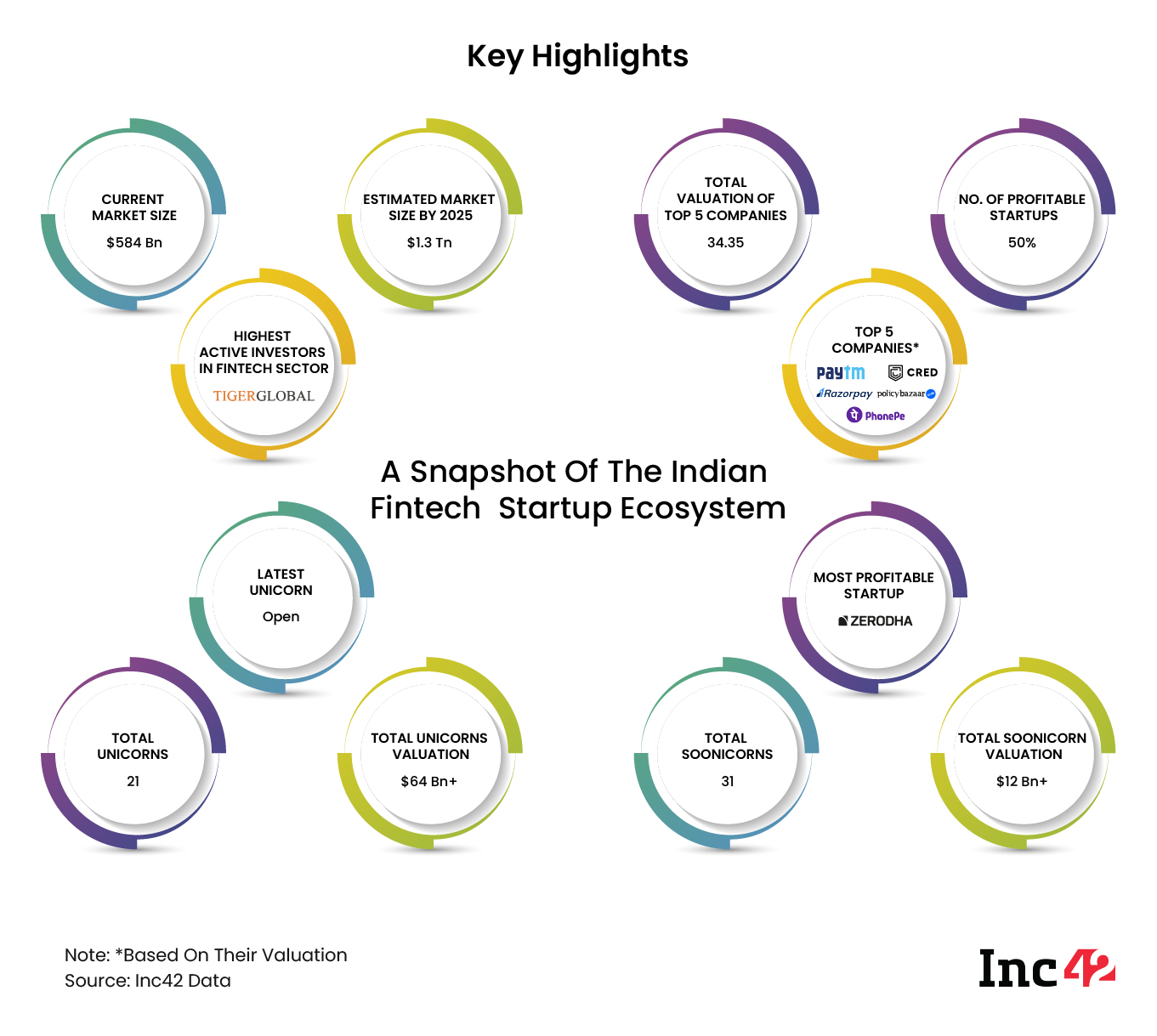 However, there is a discerning fall in funding activity in the Indian fintech sector, especially within the growth and late stage startup ecosystem.

The Reasons For Funding Downturn

The slowdown in funding in the Indian startup ecosystem can be attributed to the larger macroeconomic and geopolitical factors. The negative sentiment in the global markets, rising inflation rates, tightening monetary policies across countries, the Russian-Ukraine war, among others, will lead to a ‘funding winter’, experts believe.

Funding winter or not, the bull and bear cycles are a part of the market and one follows the other. This is most likely a market correction, similar to the previous cycles in 2008 and 2016, investors believe.

As per Pearl Agarwal, founder & managing director of Eximius Ventures, “Growth and late stage funding in India is primarily driven by global funds who have become bearish in this market.”

“The US fintech index is down 70% and this is having a direct impact on growth stage companies all over the world. The correction in the domestic market for fintech startups has further added to the concerns. As the public markets correct themselves to reach reasonable valuations, late stage companies will be the first to get impacted,” Agarwal added. 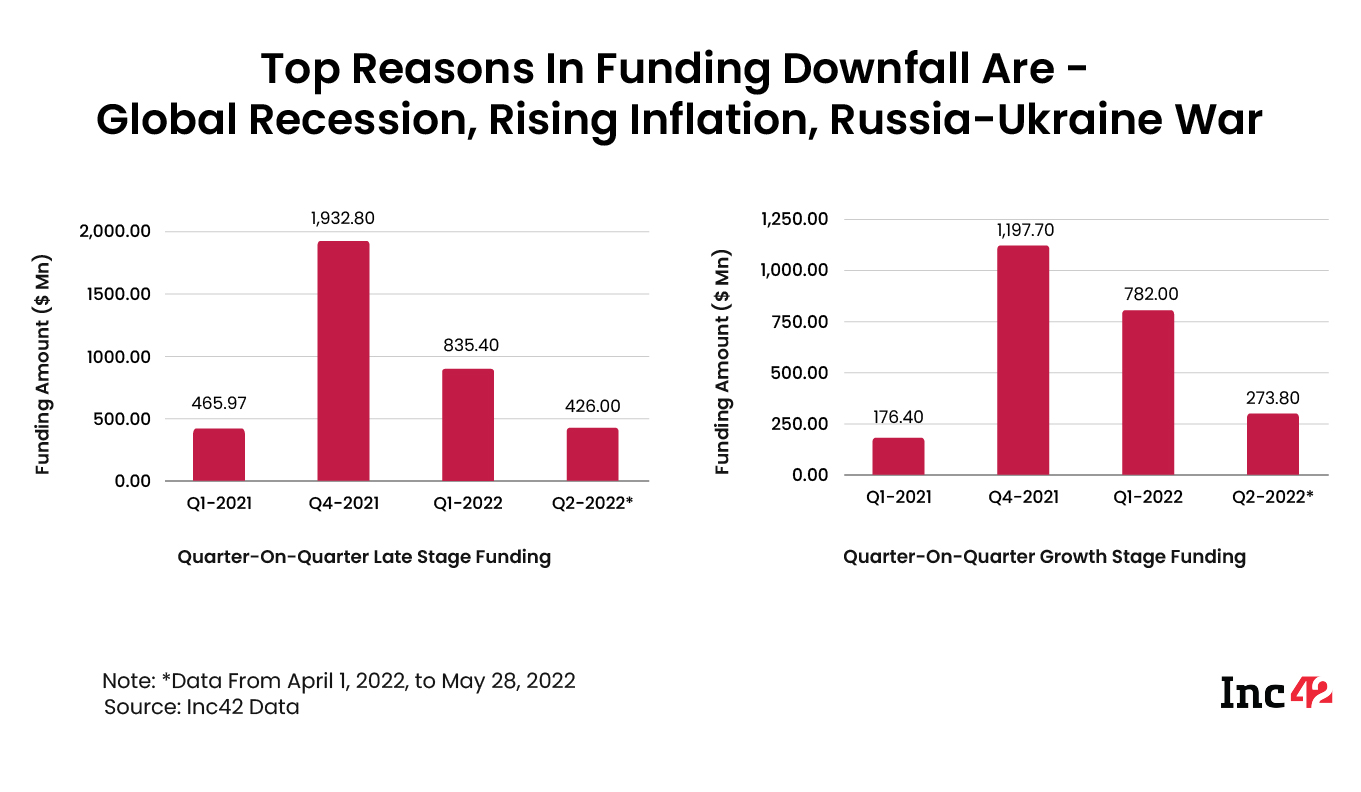 According to Sunitha Vishwanathan, partner at Kae Capital, the current situation appears to be a result of consolidation. “In 2021, fintech startups saw close to $9 Bn inflow, which was almost double of 2020. It was bound to happen that the same amount couldn’t be met in 2022 as growth and late stage startups are already well capitalised.”

Besides, the below-par performance of the startups in the international portfolios of venture capital (VC) firms is also one of the reasons behind increased investor caution.

Sanil Sachar, Partner at Huddle, stated that there are many look-alike startups which are being funded quite close to one another and are competing in valuations.

Besides, valuations have skyrocketed due to the oversubscription of several ventures in their funding rounds, making it harder to justify a few future valuations, he added.

“Some might even say a sense of FOMO led to higher valuations,” Sachar said.

What Do Investors Want?

One of the common themes that emerged during Inc42’s interactions with several investors was that they have become more stringent on growth and profitability metrics than before. 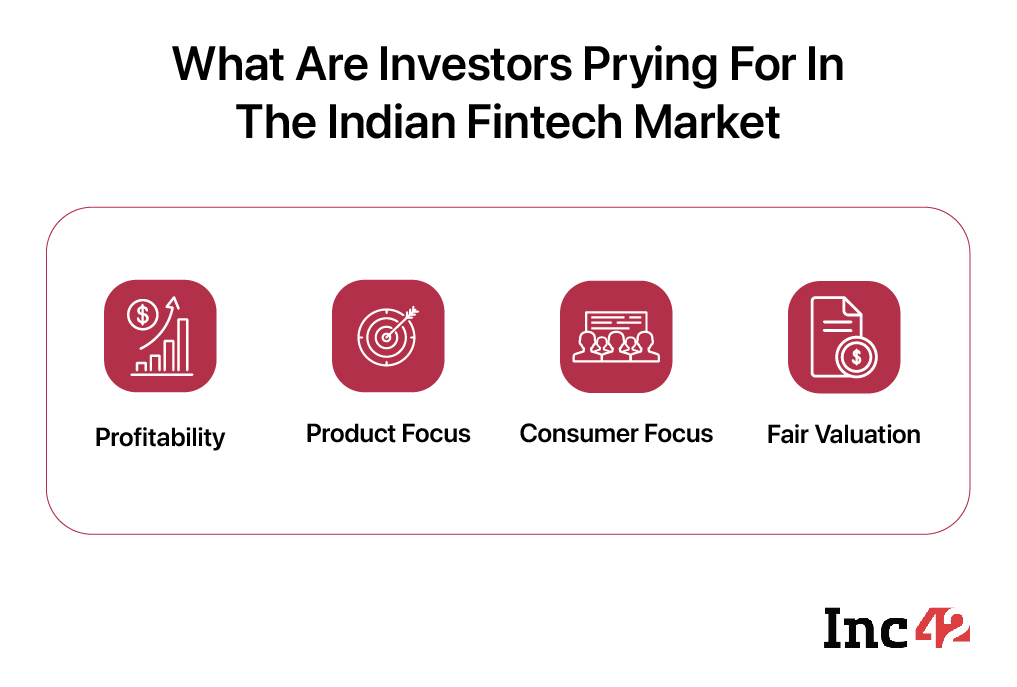 Krishnan Neelakantan, managing partner at Ankur Capital, told Inc42 that within the growth and late stage fintech startup ecosystem, investors are now on the lookout for startups that are showing good/improving unit economics and can keep growing through a core stream of business even if new business initiatives are cut back.

Mirroring the thought, Anil Joshi, managing partner at Unicorn India Ventures, stated, “Late stage startups have crossed the market hurdle and are looking for steady growth. The investors at this stage prefer decent returns (though low, when compared to early stage ventures) which are risk-adjusted to most of the issues. These startups are expected to scale fast and should have a path to profitability.”

It must be noted that about 50% of Indian fintech startups are currently profitable, including Zerodha, Oxyzo, Pine Labs, Billdesk and CoinSwitch Kuber.

However, some of the major fintech startups such as Paytm, CRED, PhonePe, BharatPe and PolicyBazaar are in losses, taking the Indian fintech sector’s median EBITDA to $200K.

As funding reduces for growth stage companies, it is extremely important that they start to focus more on their ‘hero product’, Pearl Agarwal said.

“As valuations in the public markets have adjusted, investors are also looking at companies that are fairly priced for the current markets, or are waiting for expectations to readjust,” she added.

Investors also believe that startups need to focus on their products.

What Should Fintech Startups Do?

Investors believe that the startups need to focus on customer retention, cutting operational costs and prioritisation.

According to Sachar, creating several revenue models is always a good idea. “This can be done by either increasing the AOV (average order value) through your existing user base through backward or forward linkages in your ecosystem or via stemming into newer channels through new products or collaborations.”

He added that those who have acquired customers for cheap, even with a low AOV, will come out winners rather than those who created larger AOV with high discounts or big customer acquisition costs (CACs) as those users will eventually fall out of the system once price stabilisation takes place.

Evolve To Include Smart Investment Opportunities

Investment tech is one of the most common themes among VC firms backing potential fintech companies as only 90 Mn Indians have Demat accounts, highlighting the huge market opportunity in a country with a population of 1.4 Bn.

Fintech startups have built core products around investment, but supplementary investment services can be an idea worth looking at.

Investors further believe that growth and late stage fintech startups will have to differentiate their products to drive organic customer acquisition. While product innovation will be the key to staying ahead, startups often have to grapple with regulatory approvals. Hence, reducing customer acquisition costs will help them move towards profitability.

“As much as there is a scarcity of funding, good business models should continue to attract capital – capital that is now more discerning when it comes to quality of margins and scale. In this environment, entrepreneurs that target large underserved markets through a business model that has healthy unit economics, with sticky customers and non-linear scale – should stand out,” according to Jyotsna Krishnan, managing partner at Elevar Equity.