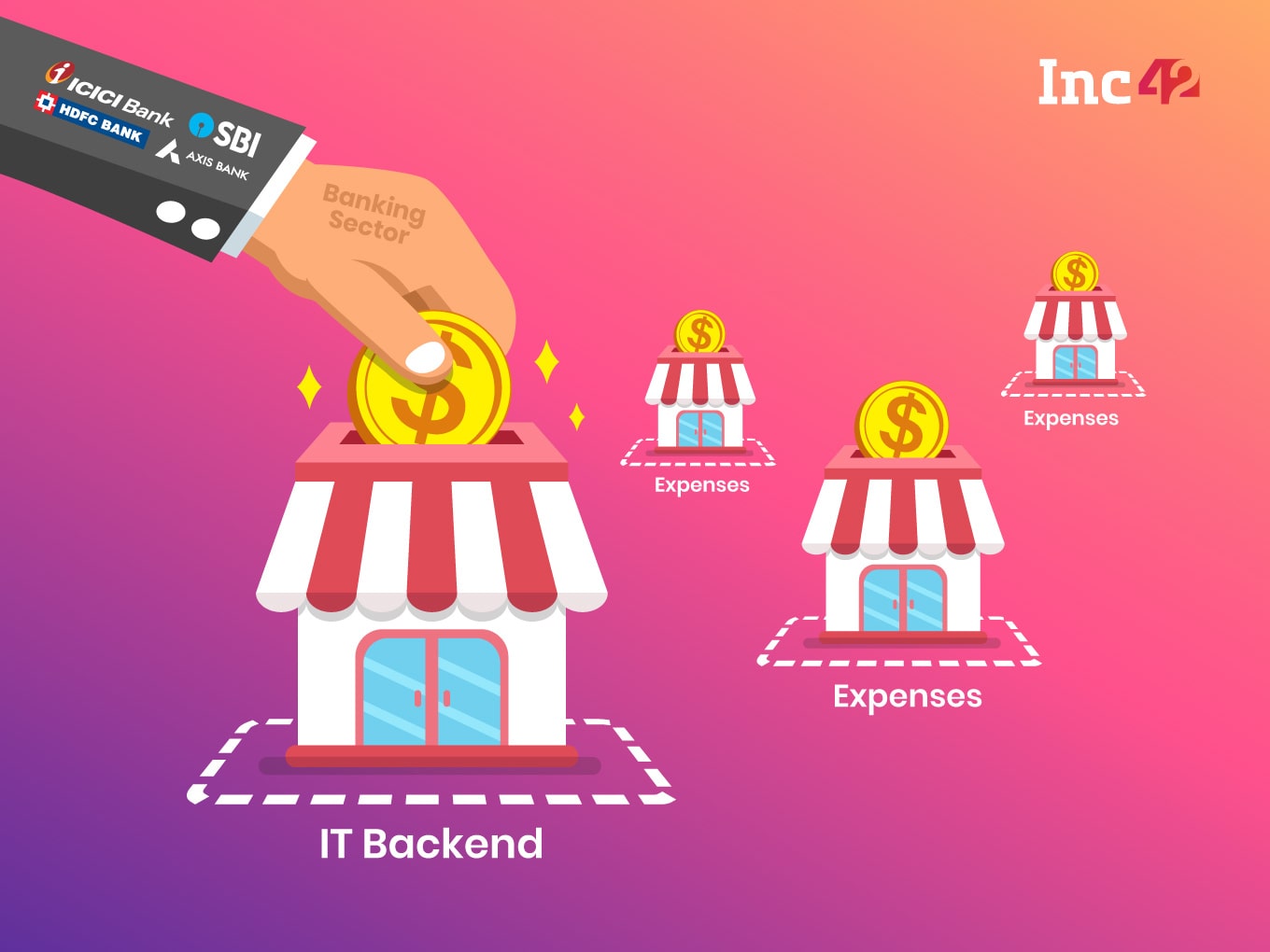 Banks need to scale up IT Investments from 2% to 8-10% of their top line for effective management of growing digital transactions, say experts.

Investments should be made to ensure shifting applications to the cloud, hardware upgrades and payments system upgrades.

Banks have to shift focus from consumer-facing front end to the load-bearing backend infrastructure if they have to support digital growth.

As some of the big banks in India recently faced operational issues due to unexpected technology outages, industry experts suggest that their spend on technology, currently in the range of 2-5% of the banking sector’s gross revenue, should be scaled up to 8-10% to handle the current rate of digital transactions smoothly, without technical glitches.

The recent incidents at HDFC and the SBI saw the Reserve Bank of India (RBI) take cognisance of these service outages and ask them to set up adequate technology frameworks to prevent future glitches. In a never-before move, the central bank has asked HDFC Bank to refrain from launching its planned digital services and stop issuing new credit cards until it fixes these tech issues. But more than the punitive action, it is the core issue that may hinder leading banks from moving towards the next digital upgrade.

Why Stopgap Solutions Will Not Work

Given the current scenario in the digital payments space, the banking regulator’s action seems justified. For starters, the government’s push to increase digital transactions post the 2016 demonetisation drive, coupled with the logistics challenges the country had to face this year due to Covid-19-induced lockdowns, had witnessed a surge in digital transactions across banks. But there is more.

From mandating companies with a turnover of more than INR 50 Cr to offer digital payment options (via RuPay debit card and UPI QR code) to zero merchant discount rates (MDR) on online transactions, multiple measures are now in place to nudge consumers and businesses towards large-scale digital payment adoption.

A Redseer report also reveals that digital payments will grow about 2x and touch $60 Tn by 2022 after the Indian economy rebounds post- Covid-19 lockdowns “driven by a continued rise in private expenditure, with retail consumption at the forefront, and a significant increase in digital maturity of the Indian customers”.

But the outcome of the digital transaction surge was somewhat disturbing. Even the top banks, including the State Bank of India (SBI) and HDFC Bank, which are well-equipped to handle large volumes of digital transactions, had buckled under pressure due to several reasons.

Even though legacy banks are tying up with new-age fintech players and technology companies to increase the number of digital products and strengthen the technology backbone for high transaction volumes, the issues of compatibility and timely upgradation remain. Legacy hardware and software used by banks have been around for decades, and these need to work in sync with a good many co-dependent applications. This is easier said than done as one never knows when an operational mismatch can throw the entire system off gear. Hence, these banks also tend to be cautious about changes.

Moreover, despite regular upgrades, most of the banks have to support old and obsolete technology across their platforms along with layers of innovative technology, required for fast-evolving operations. Transaction loads are particularly high towards the end or beginning of a month or a financial quarter, and experts suggest that these loads can effectively be handled with investments in dynamic cloud solutions. Given that banks are generally risk-averse towards major technological changes, risk-rated application guidelines may allow them to switch to the cloud confidently.

The chinks in the system started appearing last year, and even during the pandemic, it was clear that all was not well. “We first saw it when there was a sudden surge in the AePS transactions to avail of the benefits of PM Garib Kalyan Yojana. System downtime was a significant reason for transaction failure, which kept people away from their benefits. We are now seeing system outages in UPI, SBI’s integrated digital banking platform YONO and the HDFC Bank. Such experience raises questions on system capacity,” said Beni Chugh, Research Manager, Dvara Research.

Chugh thought more investments in digital upgradation would be an issue without better incentives, unlike the current zero-MDR policy. She, however, noted that the RBI’s regulatory guidance has always existed for banking IT infrastructure, right from the recommendations of the Working Group on concerns such as information security, electronic banking, technology risk management and cyberfrauds. But what should be the next level of tech guidelines and investments which banks need to look at?

What Banks Are Currently Focussing On

Going by the financials of the top banks (in the public and the private sectors) their general IT spends range at around INR 200-400 Cr or about 2-3% of their top lines. This needs to be ramped up to INR 800-1,000 Cr over the next five years for seamlessly handling the scale of transactions estimated by RedSeer.

“Currently, banks invest around 2-5% of the top line in technology solutions. There is a need to extend the investment to 8-10% of their top line to support the growing transaction volumes over the next few years,” said Vivek Belgavi, partner and fintech leader at PwC India.

Besides low investments in core technology, lack of clarity on the focus area also hinders the sector. In the past few years, banks have improved their digital play and invested in front-end applications such as mobile banking and digital assistance. But similar investments in the backend infrastructure have not happened, say sector consultants.

Globally, a lot of core infrastructure is moving to the cloud. However, regulatory hurdles and the lack of clarity around data localisation requirements for cloud providers have prevented the Indian banking sector from investing heavily in cloud solutions.

A couple of leading banks, which work with fintech companies, are trying to establish their cloud presence specific to some fintech solutions, pointed out Belgavi of PwC India. But again, some regulatory clarity is required here.

According to him, moving to the cloud will also help these banks meet their resource requirements efficiently for seasonal high volume transactions. Further, regulators can explore risk-rated guidelines for banks to determine which applications can be safely moved to the cloud without conflicting with existing regulatory protocols.

Can New-Age Banks Show The Way?

Quite a few new-age banks, which opted for digital- and API-first routes, have found it easier to switch to new technology. For instance, Yes Bank has moved many solutions – from HR applications to virtual desktops of employees – to the cloud since 2015. Some applications, which are related to banking but do not directly impact transactions (say, statement generation), as well as training apps, have been moved to the cloud under strict security protocols.

“We have never considered technology as an expense. Around 9% of our operational expenses are dedicated to technology spend and R&D, including cloud requirements,” said Anup Purohit, the bank’s chief information officer.

In fact, the intent and the risk appetite for major technology upgrades are inherent requirements for banks to address, he added. As long as the banks have full control over their applications and data, they will continue to be compliant with regulatory requirements.

That brings us back to the critical issue – how much banks should spend on core technology or whether technology and R&D spend should be considered a part of core operations.

Research reports also estimate a significant uptick in this respect and thus, the course, which might be taken by the banking sector. In 2019, a Gartner research report found that India’s banking and securities sector was expected to continue to invest in its digital businesses, with the spends estimated to grow to $11 Bn in CY2020, up 9% from 2019.

In a conversation with Inc42, experts from the management consultancy firm McKinsey and Company, also pointed out a few key areas where banks could initially focus their IT investments.

How fast Indian banks can rise to these challenges to up their innovation game remains to be seen.