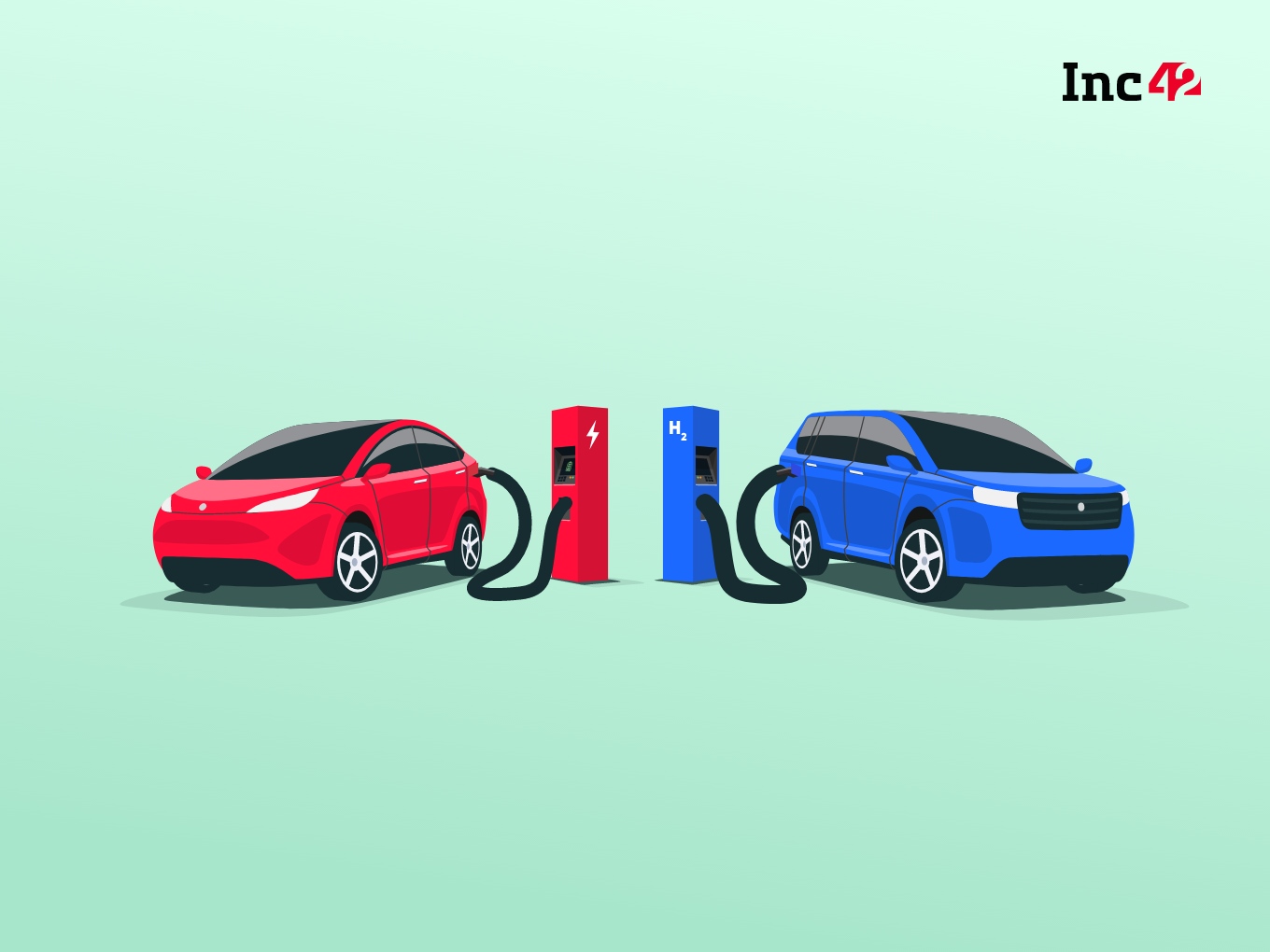 With growth challenges for battery-powered and hydrogen vehicles, which one will work in the Indian market?

From the time the focus of mobility shifted towards electric vehicles, critics have questioned the clean tag attached to EVs. While EVs have been established as cleaner than ICEs (internal combustion engines), how much cleaner is the question often raised. Especially as the method of generating electricity is primarily through fossil fuels.

Does that mean hydrogen-fuelled cars are more ecofriendly than EVs? While globally, electric cars, on relative terms, are better supported, hydrogen vehicles need to prove a bit more to gain the same kind of traction. However, a lot more customers and businesses are now acknowledging it as a potentially greener option for future mobility.

“There is hectic discussion going around the world regarding the benefits availed from an electric car and hydrogen-fuelled car where country-specific demography, technologies available, types of fuel easily available at affordable cost, security concern, market demand and other commercials terms to target audience — all of these play a vital role in driving the benefit and adoption,” said Sujeet Kumar, founding member, Kinetic Green Energy and independent consultant for electric mobility.

According to experts, EVs have other advantages over hydrogen vehicles or similar alternatives and offer a larger scope for nations who are targeting green mobility, if certain issues are resolved.

Hydrogen-fuelled cars and their fuel pumps are expensive and at the moment, such fuel-stations don’t even exist as fuel cells haven’t reached commercial maturity. Producing and storing hydrogen is an expensive affair today. “When compared to the hydrogen-fuelled cars, EVs have more prominent mindshare and presence in the market. The same reason allows EVs to be a more economical bet than its latest counterpart,” Greg Moran, CEO and cofounder, Zoomcar. 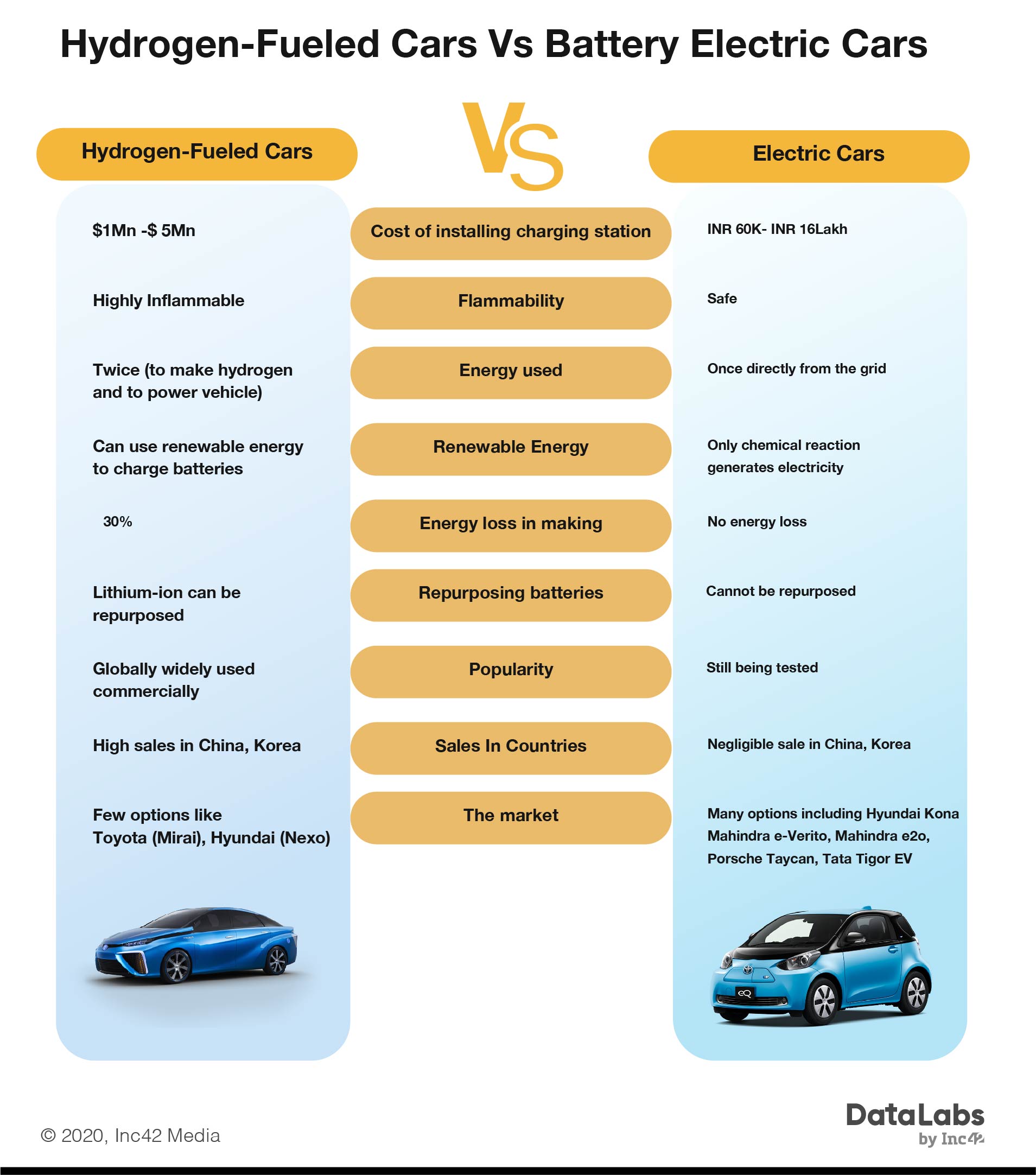 Furthermore, EVs are considered to be safer when compared to hydrogen vehicles as there are risks attached to storing the hydrogen fuel. “However, both present a strong case against the use of fossils and at Zoomcar, we would like to explore more possibilities of offering Hydrogen-powered vehicles on the platform,” said Moran.

Storage and transportation of hydrogen fuel is also a concern as this fuel is highly inflammable where electric car run by batteries are easily available, added Kinetic’s Kumar.

In the case of a hydrogen car, energy is being used twice (to make hydrogen and then using it to power the vehicle) whereas an electric car can use the energy from the grid straight away, a more convenient way. Additionally, one of the biggest benefits of a battery electric vehicle (BEV) is that it can be charged at home, and almost anywhere there is electricity. BEV’s can also make use of renewable energy to charge the batteries.

“As we know battery electric vehicles or BEVs use electricity stored in a battery pack to power an electric motor and run the wheels, the battery is recharged using grid electricity either from a wall socket or a dedicated charging unit. It’s a simple process where we simply plug our car into a charger connected to the electric grid,” added Kumar.

The charging of the battery depends upon the capacity of the battery installed in the car and accordingly the charging parameters are defined and the charging time over DC fast charging and AC slow charging. There are different charging levels and methods are available for a certain configuration of batteries and could be charged with ease and without any hassles.

“The process of making clean hydrogen, converting water to hydrogen and oxygen with electricity and then compressing, storing, shipping, and pumping it, causes an estimated energy loss of 30%. Over and above that, putting it in a car with 60% efficiency (best case) would cause an additional energy loss of 40%,” according to Akhil Aryan, cofounder and CEO, ION Energy.

According to experts, electric cars also reportedly help to reduce noise pollution in the cities as they are far quieter and create a more peaceful environment around us. This is not the case with hydrogen vehicles or ICEs

Additionally, lithium-ion batteries that power EVs, are likely to retain 75%–80% of their original capacity after their primary use, which means that they can be repurposed and recycled for a second life application for commercial or residential electrical storage. Thereby they continue to contribute to reducing carbon emissions.

Every automaker wants to get its share of the pie, and some are courageous with big investments, while others are watching the market. For example, Renault’s Zoe is not advertised as big as others, even though the investments on it started at least five years ago. Automakers who wanted to always have ICE cars have now got prototypes for electric and autonomous cars. This adoption wave will only burgeon as auto players start seeing success in others

Why EVs Are Greener Than Fuel-Cell Cars

Both EVs and hydrogen vehicles have some environmental impact in the course of production from burning fossil fuels. There will be a drastic change only when these production facilities turn to green power. Without this, the benefits derived from electric or gas-powered cars will be lost due to the polluting industries that manufacture batteries and fuel cells.

“There are several studies which suggest this, but there are several other reports which suggest that the net gain in CO2 savings for EVs may not be too big as claimed considering well-to-wheel lifecycle calculations. But the most widely accepted theory is that EVs are environmentally friendly than other liquid-fuel powered cars,” said Suraj Ghosh, automotive researcher, IHS Markit.

And, with the focus of EVs further shifting towards environmentally clean methods of procuring electricity like hydropower, solar power, nuclear power, wind power and with the production and manufacturing technology of lithium batteries improving, electric cars are expected to minimise the pollution level and be a better option.

“The market will explode when more EVs are launched that are built on a brand new platform, customer-centric in design and are competitively priced. The supply chain for EVs is just beginning to mature, and once costs are on par with ICE, EV manufacturing will exceed ICE,” said Christie Fernandez, CEO and founder, Sooorya EV.

According to Moran, using fossil fuels to produce the electricity consumed by EVs is going to do more harm than good. “With the latest technology finding its way into the production of EVs, we further stand a chance to achieve breakthroughs in optimal use of resources and environmental sustainability,” he said.

Using cleaner electricity in factories can help cut down on emissions caused by battery manufacturing. ‘The Union of Concerned Scientist report states that battery-powered EVs with a shorter range model, offset the extra emissions within 6 months and outperform conventional cars for the rest of the life of the vehicle,” ION’s Aryan told us.

However, at present, the biggest challenge is the lack of charging infrastructure in the country. This is due to the high costs of installing charging stations (Rs 2-3 lakh for a slow charger, Rs 20-30 lakh for all charger models), and infrastructure guidelines that require a charging station to be set up every three km in cities and every 25 Km on both sides of highways. Both the government and private players find the cost to be exorbitant.

But lately, there have been several announcements from companies showing interest in establishing charging infra as it is still an unexplored opportunity in the country. Also, the FAME Phase 2 framework has provisions for enabling the establishment of around 2700 charging stations across the country.

Besides this, the refuelling infrastructure has been one of the major impediments in electric cars proliferation. With the recent developments where the Indian government is serious about improving the charging infrastructure, this is expected to change, thus making EVs more popular.

“As a technology, electric cars refuelling has advanced to ‘contactless’ charging, battery hot-swap etc. Just that the infrastructure should be available for the electric car owners to do charging-on-the-go with ease,” said Ramkumar Ramachandran, automobile industry and EV expert.

As the technique for recycling of battery and car manufacturing improves, electric cars will be even cleaner in their operation and complete life cycles than any cars. EVs are responsible for a considerable amount of lower emission over their lifetime than fossils fuel-powered cars and a renewable source of energy to charge them will only make them greener.