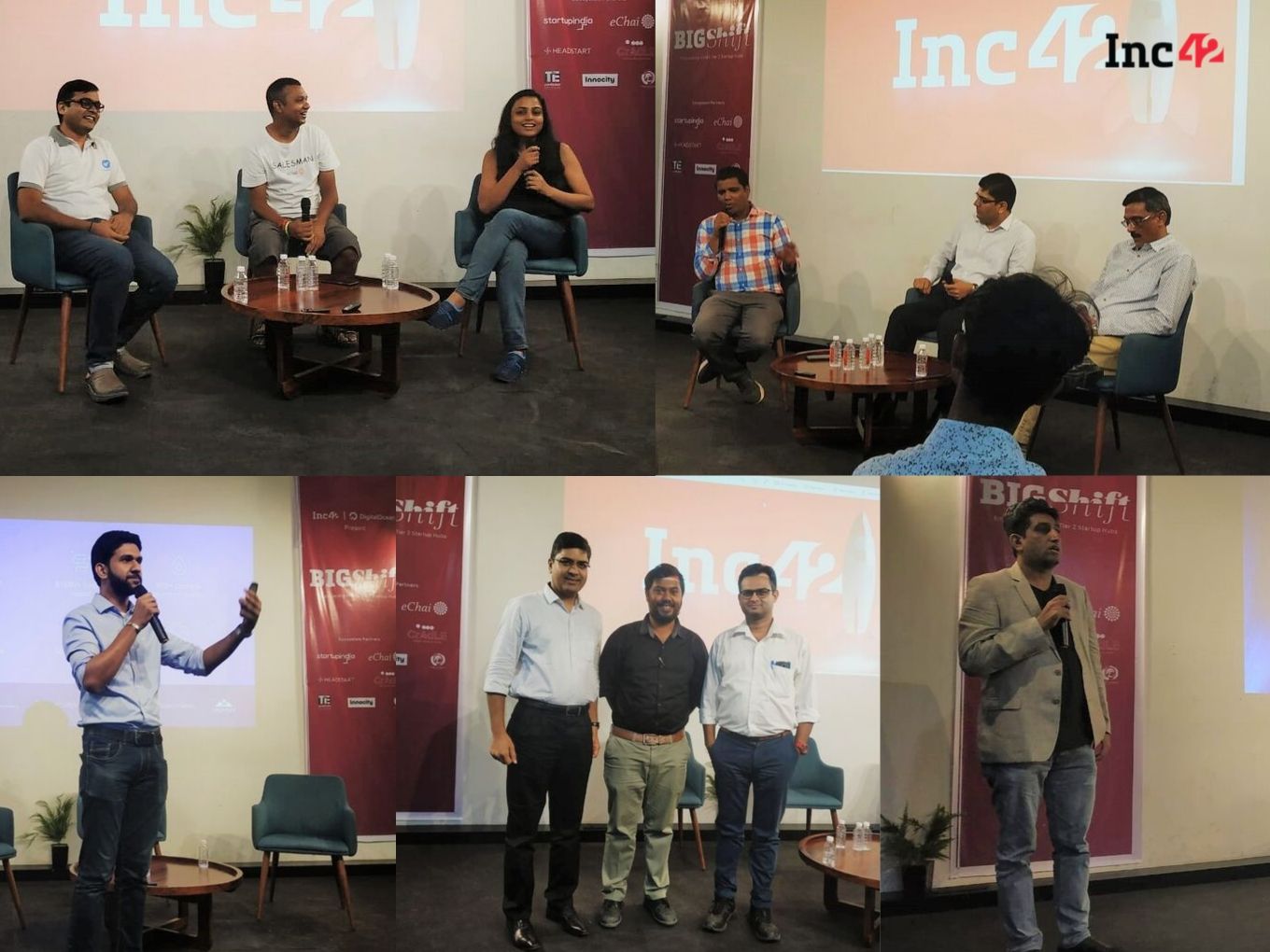 Over 70 startups and ecosystem stakeholders including Sanjay Randhar, GVFL and Hiranmay Mahanta, GTU Innovation Council and Mayank Patel, CrAdLE were part of the event

“You can’t keep learning by experimenting as there is a heavy competition that needs to be countered. Right mentorship acts as the perfect solution in this case and is important in an early-stage startup’s journey”

Sanjay Randhar, managing director, GVFL, opened up about how startups can approach the market when there’s intense competition. Randhar’s was just one among several insightful success mantras that investors, startup founders and entrepreneurs revealed on September 20 at the DevX in Ahmedabad as BIGShift stopped by the best-performing state in the context of the startup ecosystem.

A gathering of more than 70 prominent names from the Ahmedabad startup ecosystem came together to bring forth innovations and the progress that the city has been making for its startups. Here, early-stage entrepreneurs got to meet peers from the ecosystem as well as the leading names from the city’s thriving support structure for startups.

Thanks to the startup-friendly environment that Gujarat has created, Ahmedabad is progressing fast to compete with other regional startup hubs in the country. To highlight these efforts and the achievements of the city, Inc42 along with DigitalOcean hosted the fifth edition of BIGShift in the city. Reaching its fifth leg in Ahmedabad, BIGShift saw many of the city’s most innovative and enthusiastic startups and entrepreneurs.

Scaling Up Your Startup

The BIGShift Ahmedabad sessions started with the most important question for a startup —What’s the secret to turning an idea from a seed into a company that gains traction?

For any early-stage startup, scaling up is a big challenge that requires mentorship, guidance and the right environment. To provide the startups with an insight that could help them scale Varun Varde, COO, Swara Solutions, took the mantle at BIGShift. Coming from a team that manages Sandesh.com and also a video ads network providing services to large media houses such as Network18, Varde shared his insights to help startups overcome the scale-up challenges.

Continuing the flow of ideas, the next session focussed on how any city or state builds up the right ecosystem for the benefit of its startups. To elaborate on the efforts in Ahmedabad, BIGShift arranged a panel discussion with stalwarts of the city’s ecosystem. The panellists for the session were Sanjay Randhar, managing director, GVFL and Hiranmay Mahanta, honorary director, GTU Innovation Council and Mayank Patel, CEO, CrAdLE, joined them as the moderator.

Through the session, the panellists covered the roles of accelerators, incubators and every other component in the enabler community, and how they have worked towards building a robust ecosystem in Gujarat.

“We realised that awarding the students who have innovative ideas and can build up a product or an enterprise is just as important as awarding them for performing well in academics. And now look at the many talents that emerge from the Student Startup and Innovation Policy,” Mahanta pointed out.

Conducting a workshop for the attendees, Ram spoke directly to early-stage entrepreneurs in their scale-up phase, presenting insights that have helped DigitalOcean in its journey. He not only provided founders with insights on building and scaling a content engine, on building products for product builders but also conveyed to them the importance of keeping it simple.

“While building a company, it’s easy to make things complicated. And keeping it simple is a challenge. This is what has majorly helped DigitalOcean. We have built a simple and robust infrastructure experience and that is what attracts customers to our website,” he added.

As the conversation shifted to the scale-up journey of the startups, it was impossible to overlook the differences that exist in Tier 1 and Tier 2 ecosystems. To discuss these unique challenges, the next panel discussion focussed on how startups in Tier 2 cities can expand to grow their audience and base.

As panellists for the discussion, Aditi Gupta, managing partner and cofounder, Menstrupedia and Jimit Bagadiya, cofounder and CEO, Social Pilot came together and joining them on stage was Jatin Chaudhary, cofounder and salesman, eChai as the moderator.

Gupta pointed out how it is perspective that decides how a startup will progress and the opportunities that can be created.

“I wouldn’t say that I see any disadvantage in Ahmedabad. Whatever we have achieved is because of this city. It certainly has a lot to offer,” she added.

Wrapping up the eventful day on a positive note for startups attending BIGShift in Ahmedabad, the panel discussions were followed by BIGShift Pitch, where six startups made the cut to present their pitches.

As the jury for the session, Patel with his varied experience of appraising and monitoring investment projects was joined by Varun Joshi, investment professional, GVFL.

Here’s a look at the startups presenting their pitch at the session:

Farhan Vhora and Pala Varu founded MakeMyTrans on October 2016 as a partnership firm. This startup provides a B2B solution to help businesses gain operational visibility and automate end-to-end logistics. It does so with intelligent, multi-service rating algorithm that accurately estimates shipping cost and technology that designs faster chains of goods transportation.

Launched in 2015 by Mausam and Maulik Patel, this startup claims to be the first Indian company to make text-to-speech a commercial reality for Indian languages. Launching the first version of the product in May 2016, Indian TTS has three variants – English, Hindi and mixed (Hindi and English) support. These APIs are integrated with interactive voice response (IVR) software used by customer service centres, allowing regional language speakers to access communication either through text or through audio.

Launched in February 2017, by Dhrupal R Shah, Abhishek Sharma, and Pankaj Kumar Verma, this startup aims to be the one-stop solution for STEM education. It makes learning a playful experience by enlightening young minds about new-age tech while also empowering them with 21st-century skills so that they can excel in a tech-driven future.

This startup was launched in August 2016 by Hunny Bhagchandani and Mohit Chelani. The vision behind Torchit was to empower differently-abled people across the world to lead more independent, meaningful and connected lives through the use of simplistic, effective, and affordable assistive devices. It’s Assistive Mobility Device claims to have 99.7% obstacle detection accuracy at a range of two to eight feet.

Reelo was incorporated in November 2017 by two brothers Parin and Prit Sanghvi. This startup is a loyalty rewards programme that helps hyperlocal businesses grow their business by helping acquire customers at a lower cost, and help retain them for longer.

Founded in January 2014 by Yash Shah, Anupama Panchal and Abhishek Doshi, Gridle offers clients’ lifecycle management software to modern agencies. From sales CRM to proposal and from client management to invoicing and revenue realisation; agencies and freelancers can manage all their interactions with their clients in one place.

As the pitch concluded, the jury picked Gridle as the BIGShift Pitch winner for Ahmedabad, while all of the participating startups earned benefits such as a direct entry into DigitalOcean’s Hatch Program which offers infrastructure credits, priority support, training and access to the startup community.

“Gujarat has always been very proactive and progressive for its startups. The effect was visible in the startups we saw at the event. Tier 2 cities are rising to the challenge presented to them by their Tier 1 counterparts and we have seen this in every BIGShift event,” said Pooja Sareen, cofounder, Inc42.

After the success of Ahmedabad, all eyes are now on Andhra Pradesh as the BIGShift is heading for its final destination on October 4 in Vizag. Be a part of the initiative, to meet the notaries you have been meaning to impress as well as your peers from the ecosystem. The seats are limited!