As Life Gets Back To Normal, India’s Coliving Sector Starting To Get Back On Track

The growth of India’s millennials-driven shared economy was never questioned until the pandemic hit the world. One of the promising segments in the shared economy, the coliving sector, was seeing steady growth with the entry of new players and the influx of investors’ money before the pandemic. However, as the pandemic compelled the world to go under stay-at-home mandates, the reverse migration out of urban employment hubs impacted the coliving sector severely.

Before the onset of the pandemic, many coliving startups emerged in the country with an objective to reshape the rental housing industry in India. In 2018, hospitality startup Oyo ventured into the segment with Oyo Life. Home rental startup NestAway also forayed into coliving and student living with its independent subsidiary Hello World in 2019. Besides, other coliving startups such as Stanza Living, Zolo Stays, House, Isthara, Setll, Colive entered the segment during 2015-19. 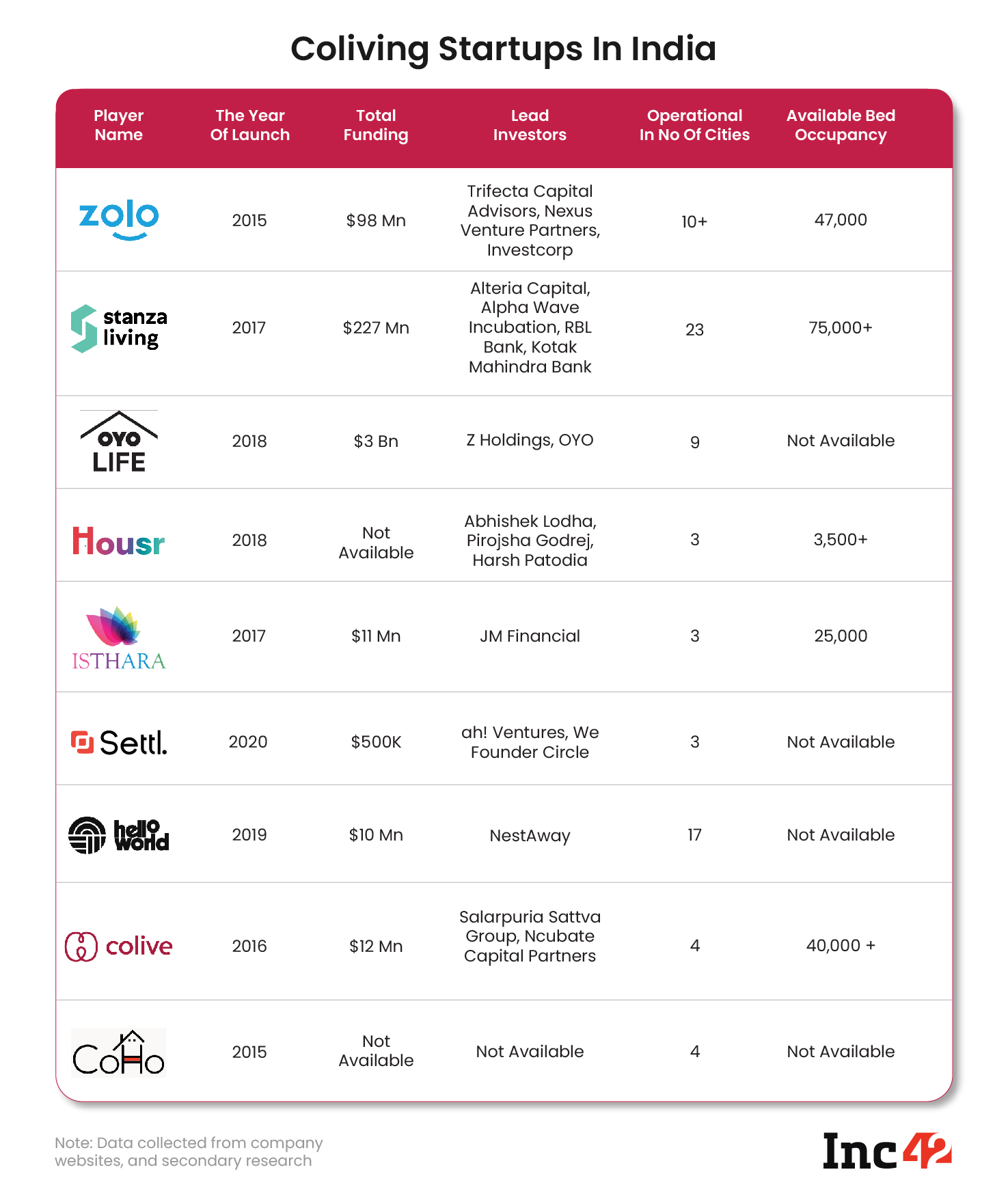 Little did these startups know that the pandemic would wreak havoc on their business plans and models. As a result of stringent lockdowns and move to work/study-from-home mode during parts of 2020 and 2021, the coliving startups saw a sharp dip in their occupancy. The occupancy mark even went below 30% for some of the players, according to industry stakeholders.

Due to the Covid-related headwinds, the future of the coliving industry looked bleak for a while. However, the coliving startups have started seeing a gradual recovery since February this year, and are expected to reach the pre-pandemic level of demand, with 90-95% occupancy at the portfolio level, soon.

With the majority of educational institutions starting back offline operations, the demand for student housing has picked up, Arjun Sumaya, head alternatives, India JLL, told Inc42.

“We expect the occupancy to be robust by the time the coming academic session commences in June / July this year. A similar trend is observed in the coliving segment with a steady increase in occupancy over the last few months,” he commented.

According to a FICCI report published in 2019, the supply of beds by organised coliving players was estimated to reach 5,41,000 by 2023. As the coliving startups cut down on their expansion strategies during the pandemic, the post-pandemic estimation looks different. 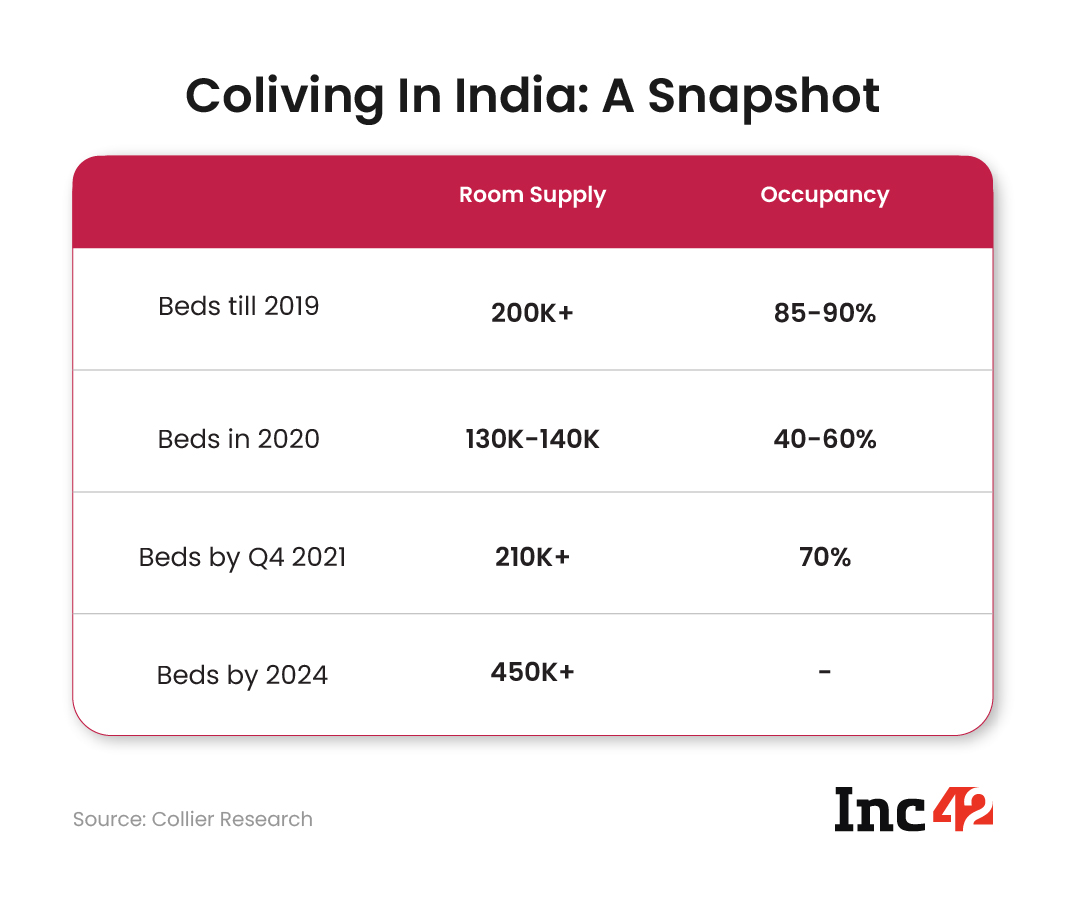 The coliving segment in India ended 2021 with 2,10,000 beds, according to a Colliers report. By the end of 2024, the segment is expected to double the inventory by reaching 4,50,000 beds mainly driven by organised players. The report also predicted recovery in occupancy in 2022 owing to several factors such as increasing workforce, migration to urban centres for jobs, and inefficient unorganised sector that includes PGs, mess, private hostels, among others.

Fighting Through The Pandemic

For example, Gurgram-based Housr saw the impact of Covid-19 in three phases. The coliving startup witnessed a substantial dip in occupancy during the first wave of the pandemic, starting in March 2020, its cofounder and CEO Deepak Anand said. While it maintained a 90-95% occupancy in the pre-pandemic period, Housr’s occupancy sharply fell down to 60% in the initial months of the pandemic.

However, with a gradual decrease in Covid cases, the situation seemed to improve in the latter part of 2020. Housr’s occupancy started coming back to normal level from September 2020 onwards and reached 95% by November 2020. However, the deadly Delta variant wave impacted the demand even more severely. From April 2021, the coliving startup again saw a sharp decline in demand, with occupancy declining by 50%. While the Delta impact lasted for four months, Housr’s occupancy rate again came back to 95% level by September last year. The third wave of pandemic also impacted the demand but comparatively at a lower rate, in the range of 10-15%.

Although the last two years have significantly impacted the sector due to business headwinds, Covid-19 has accelerated the growth as the consumers are now shifting to organised players, Krishna Kumar, CEO of Isthara Coliving, said.

“The coinage of coliving is new but the business vertical has always existed in India in various forms. The term came into existence 4-5 years ago. What the industry was trying to do was ensure that the significant portion of inventory that was available to unbranded, unorganised segments, moved  into more branded and consolidated into the organised segment,” Kumar said. Similarly, Isthara Coliving has also seen a revival in demand in the past few months, with occupancy reaching pre-pandemic level of 70%. Moreover, the startup has reached the pre-Covid level of 90% occupancy in its student living segment.

On the other hand, Anand said Housr has reached pre-pandemic level occupancy of 98% at portfolio level. In many of its properties, Housr is seeing higher booking demand compared to available occupancy.

Sumaya believes that the sector is firmly on a recovery path, with operators aggressively chasing new signings targeting the upcoming academic session. The sector is expected to revive from the pandemic impact in the next couple of quarters, he said.

“We are already witnessing strong interest from institutional investors as well as student housing or coliving operators for fresh investment in this sector for opportunities focused on the B2B model, wherein there is a demand backed by an education institute / corporate occupier,” Sumaya said.

However, investment in the B2C model will follow on the basis of the complete revival of the sector over the next few quarters, he noted. 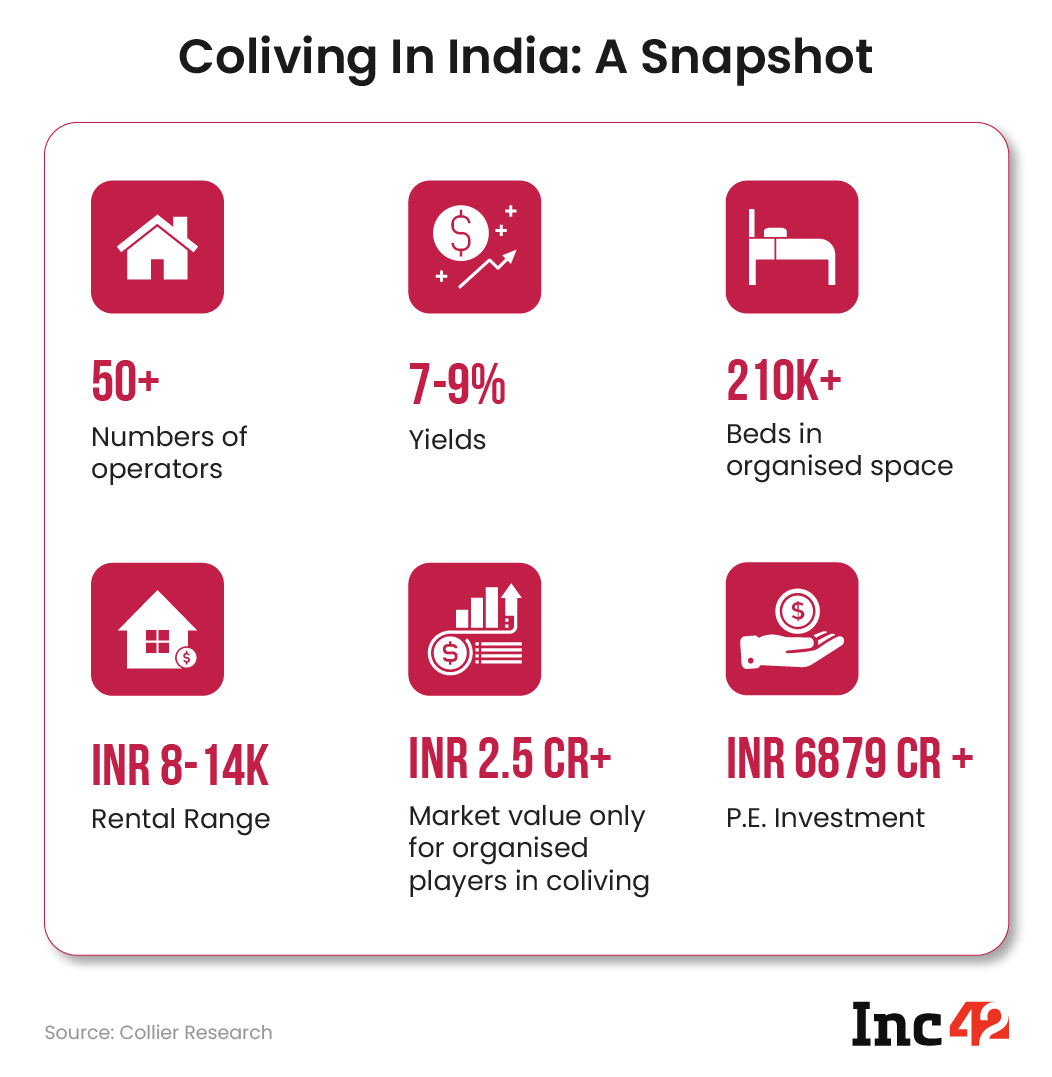 With the demand coming back, the coliving startups have started considering price revisions after two years of status quo. For instance, Housr increased price by 15% in the last three months. While Zolo Stays offered multiple discounts to retain consumers during this period, its pricing is expected to reach pre-pandemic level shortly.

“What we are slowly starting to witness is an era where we have supply issues and the demand is far greater. We are working on repricing to bring it in line with escalated costs of operation,” Kumar said.

For these coliving startups, the pandemic has also provoked changes in consumer mindset. After following social distancing rules for a long time, a trend of avoiding overcrowded occupancies is slowly emerging. In addition to that, cleanliness and hygiene have started emerging as the top preference while choosing an accommodation.

Currently, 75% of Housr’s tenants are living in single accommodation and 25% are going with twin-sharing rooms. Zolo Stay’s Sikri also acknowledged that more people are now showing inclination towards single occupancy. 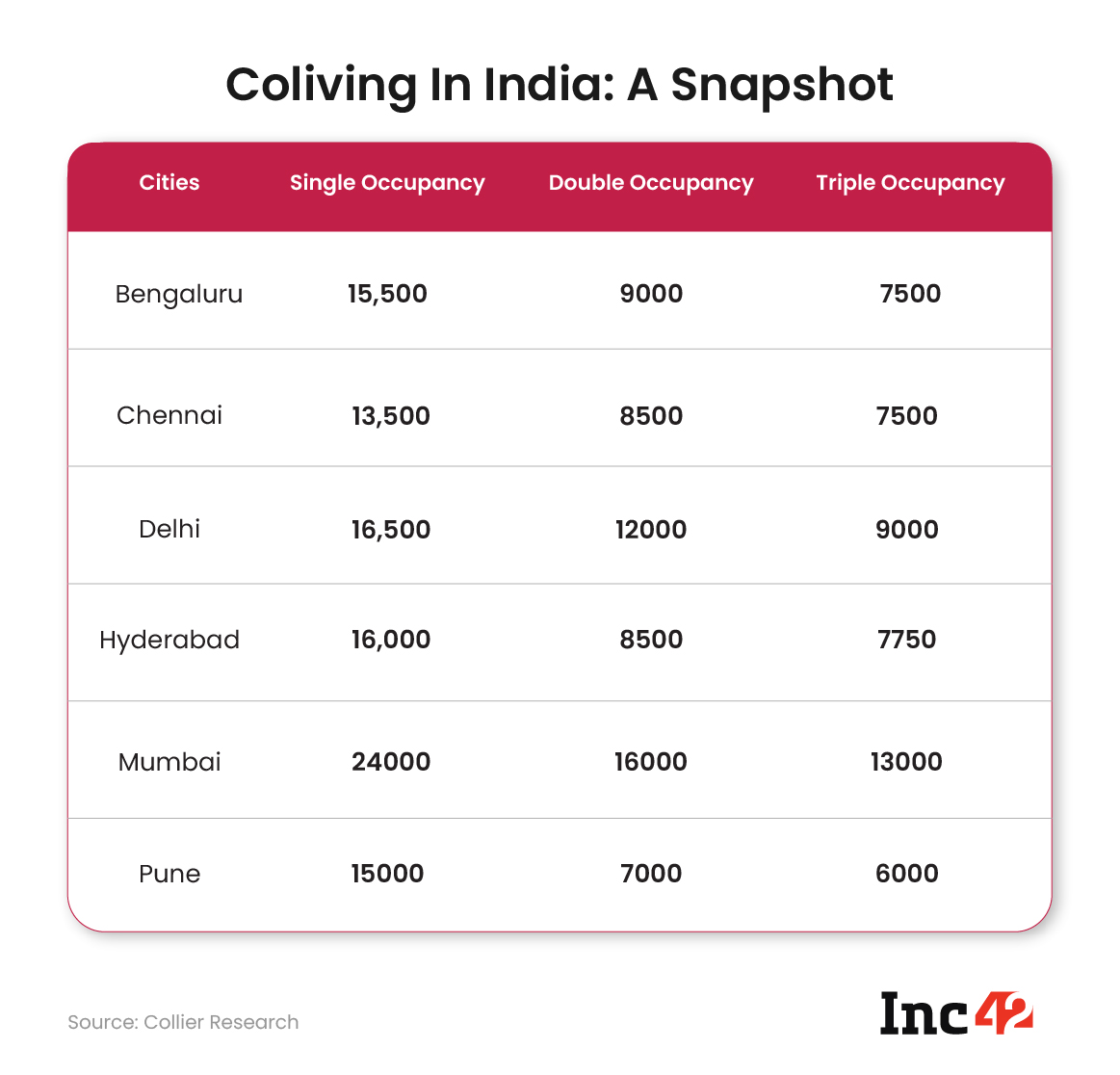 “This is where the organised student housing / coliving operators have demonstrated their expertise in not only helping create quality assets but managing and maintaining these to the standards that a traditional PG / rental accommodation may not,” he stated.

The players in the coliving sector are also increasing focus on providing infrastructure in view of the fact that many offices will continue with a hybrid work model. Isthara Coliving has set up small social areas within its facilities where people can work, while Housr is providing study tables and chairs to its residents. Moreover, the coliving startups are also focusing on providing seamless, high-speed internet connectivity.

With life returning to normalcy and occupancy reaching pre-pandemic levels, the coliving startups are expecting a steady revival this year. The coliving players are also expanding their portfolios.

Zolo Stays is planning to expand its portfolio to 90,000 beds by the end of this calendar year from 47,000 beds currently. Isthara Coliving also expects the number of its beds to increase to 30,000 by the end of June from 25,000 currently.

Amidst all these, industry stakeholders are bullish on the market. They expect the recovery rate to rise further when major tech offices start reopening.

“There is a strong supply pipeline of greenfield bespoke student housing / coliving assets, which offer a community advantage backed by a solid tech platform developed by these operators,” Sumaya said.

He is of the view that student housing or coliving operators will manage to command a significant share in the rental housing market going forward.