A Buzzing Startup Hub In The Making: Indore Rises To Make A Mark In The Indian Ecosystem

A Buzzing Startup Hub In The Making: Indore Rises To Make A Mark In The Indian Ecosystem 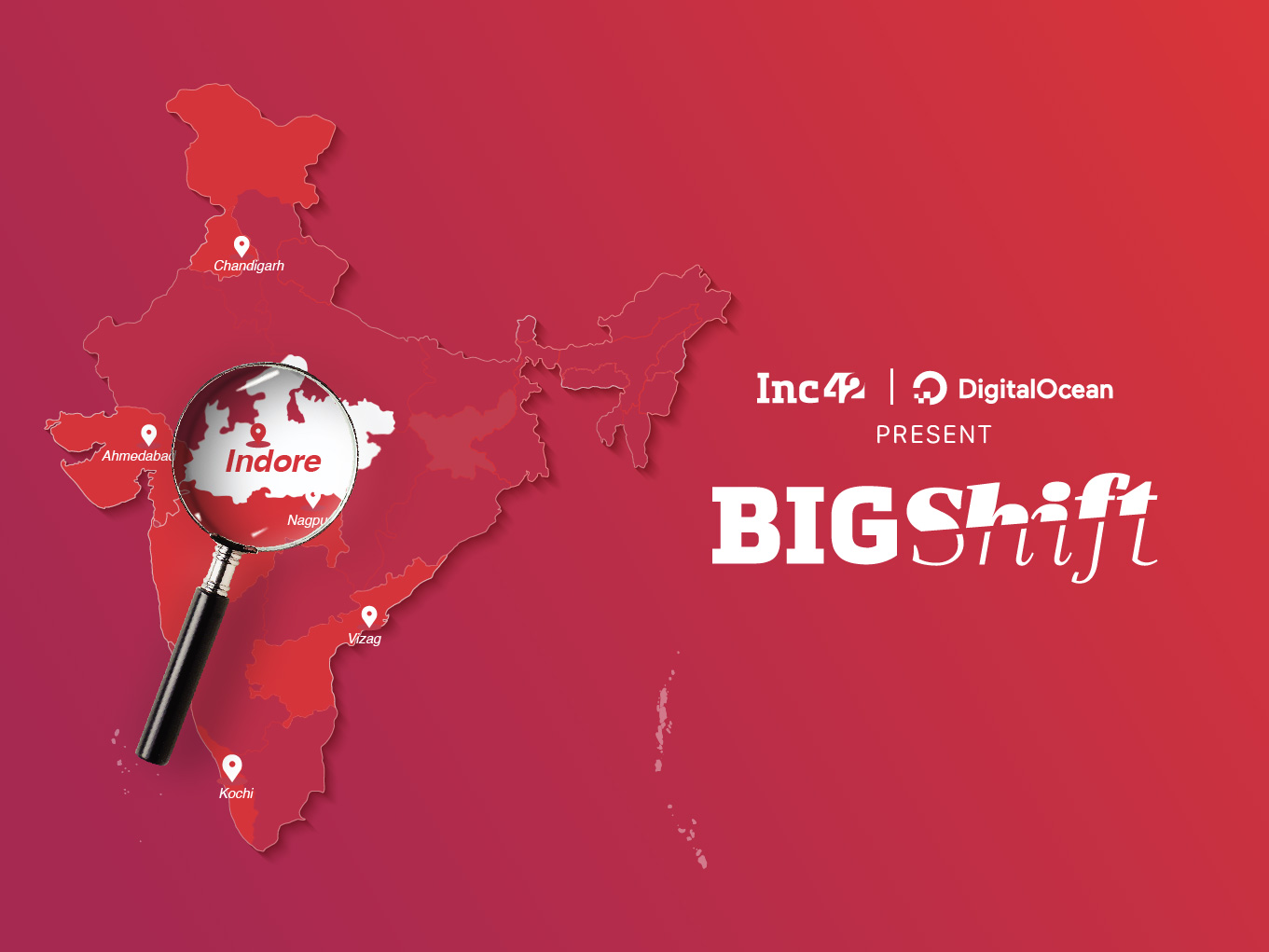 Inc42 and DigitalOcean’s BIGShift will arrive at its fourth destination, Indore, on September 6 at Workie

Attendees and speakers include Parveen Singhal, founder, WittyFeed, Tanutejas Saraswat, founder and CEO, ShopKirana, and others

Five startups from Indore will get a chance to pitch their ideas in front of a jury, as a part of the BIGShift Pitch

Madhya Pradesh may be the second-largest state in the country, but it is far from the robust startup ecosystem in smaller states such as Karnataka and Delhi. But that doesn’t mean startups have not touched this ‘heart of India’. In fact, till 2018, the state was home to more than 1,200 startups, according to DataLabs by Inc42.

This growth is thanks to the state government’s efforts for the startup ecosystem, which includes the Madhya Pradesh Incubation and Startup Policy 2016. The policy was formulated to align the state with the centre’s Startup India initiative and intends to offer incentives to the state’s startups and incubators in addition to those provided by the central government.

With the state government’s venture capital fund launched in 2014, a total of $15.4 Mn was set aside to incubate and promote startups in the state, with a special focus on the IT and MSME sectors. Then, the MP government reserved another $15.4 Mn for budding entrepreneurs as part of the “Global Investors Summit 2016”. More such initiatives and policies have been put in place to boost the ecosystem.

Thanks to these efforts, MP‘s Indore and Bhopal are emerging as startup hubs. Among the two, Indore is said to have the more evolved ecosystem with many of the prominent startups of the state headquartered in the city. The city also saw the construction of the first-ever Data Centre Park in the state at Betma in 2016.

The biggest startup in the state is WittyFeed, with its headquarters in Indore. Founded in 2014 by Parveen Singhal, Vinay Singhal and Shashank Vaishnav, WittyFeed reached 250 Mn page views per month in a span of just three years. It further claims to have an audience reach of more than 1 Bn users in terms of visits and has 80 Mn unique readers every month.

Other prominent names include Rackbank, founded in 2013 and which has a client base across 120 countries, catering to data storage needs for businesses. Its founder Narendra Sen was a key figure behind India’s first Data Center Park being established in MP.

Then there’s B2B supply chain startup Shopkirana, which was founded in 2015 and raised $10 Mn in a Series B funding round earlier this month from existing investors Info Edge, Incubate Fund and more. It claims to be present in 30 cities, with 2 Bn sales overall from an audience of 50 Mn at these local small stores.

Joining this list are names such as EngineerBabu, a web and app development agency for startups; AiTrillion, ecommerce marketing platform; Weyu, a home rental platform; online laundry platforms GetIronman and Remphi; on-demand beauty and wellness platform Calipso; as well as personal safety app CitizenCop. These and others have put Indore on the map in the Indian startup ecosystem.

Building on this thriving ecosystem, Inc42 partnered with DigitalOcean for its BIGShift initiative and has Indore as its next destination after Chandigarh, Nagpur and Kochi. In Indore, the event will bring the early stage startups to the forefront and help them connect with the ecosystem and spread their business network. With an audience of founders, investors and government stakeholders. Indore is all set for BIGShift on September 6 at Workie.

It’s not for nothing that Indore is known as the financial capital of MP. From 2014 to the first quarter of 2019, 27 startups in the city have received funding with the invested amount crossing $38 Mn, according to secondary research by DataLabs.

Thanks to its pedigree as an IIM and IIT city, Indore has seen plenty of startups and entrepreneurs come through its doors. With more than 37 investors and over 33 coworking spaces, the city has grown in terms of the support systems for new startups as well.

Madhya Pradesh Angel Network, founded by Sawan Ladha works to help startups secure funding, connecting them to investors and mentors across the state. Some companies in its portfolio are Edu-Net, Shaurya Infravsion, Eatoutadvisor and more. Another prominent name in the angel investor community in Indore is the Swan Angel Network, founded by Abhishek Sanghvi, which is a group of 35+ HNIs from Indore, Mumbai and the US.

The wave of emerging startups has given rise to the coworking culture in the city with names such as Workie, which boasts over 3000 seats in the city and also has space for an in-house incubator. Then there’s Incuspaze, which has a network in Mumbai and Delhi and has arrived in Indore to tap the next generation of startups. Another coworking space is ADITED, whose first office reached 100% occupancy in just three months.

Besides workspace, incubators are crucial for seed and early-stage startups. The Srijan, an AKVN (Audyogik Kendra Vikas Nigam) incubator, provides facilities such as infrastructural and investment support, mentoring sessions for startups and allots office space to startups.

Supporting the state-level incubator, the central government’s Atal Incubation Centre’s Prestige Inspire Foundation, which also brings crucial support for infrastructure, space and funding—Its focus is to provide support to startups that are aiming to impact the core sectors of the economy, particularly technology-based innovation for agriculture and more. Besides these names, incubation centres at IIM and IIT in the city also help nurture budding startups.

Indore is the fourth city in Inc42’s six-city tour of BIGShift. So far BIGShift has seen overwhelming turnout from startups and ecosystem stakeholders. Starting in Chandigarh, BIGShift travelled to central India with Nagpur and then further south to Kerala with Kochi. All three events were massive success stories when you consider the many innovative early-stage startups and entrepreneurs that had come together. With the huge number of applications already flowing in, BIGShift Indore is set to see even better participation.

The event will be held on September 6 at Workie in Indore. The speakers for the event include leading names such as WittyFeed’s Singhal, Tanutejas Saraswat, founder and CEO, ShopKirana; Manish Shara, product head, Dineout and Prabhakar Jayakumar, India head, DigitalOcean.

The highlight of the evening will be the BIGShift Pitch which will give five startups from Indore an opportunity to showcase their innovative ideas and business models to a jury consisting of industry stalwarts. These five startups of BIGShift Pitch will get benefits such as a direct entry into DigitalOcean’s Hatch Program which offers infrastructure credits, priority support, training and access to the startup community.

BIGShift Pitch is an initiative that strives to provide early-stage startups with a platform to showcase their business proposition, models and products in front of the stalwarts from the startup community from each location. Any early-stage startup based in any of the BIGShift host cities can apply to showcase their business proposition at the event.

BIGShift Indore: To Help The City In Its Startup Hub Journey

The BIGShift series has seen participation from over 400 startup ecosystem stakeholders and has enabled 40 Indian startups including TickTalkTo and Zadd Bikes from Chandigarh, Minocular and Healthalicious from Nagpur, and Yuva Pay and EVR Innovations from Kochi among others to showcase their products and present their ideas to investors, other entrepreneurs, influencers and more.

The BIGShit vision is to cover more startups and cities while giving the startup ecosystems in Tier 2 cities the platform they deserve.