2019 In Review: International Brands In Hot Waters In India

2019 In Review: International Brands In Hot Waters In India 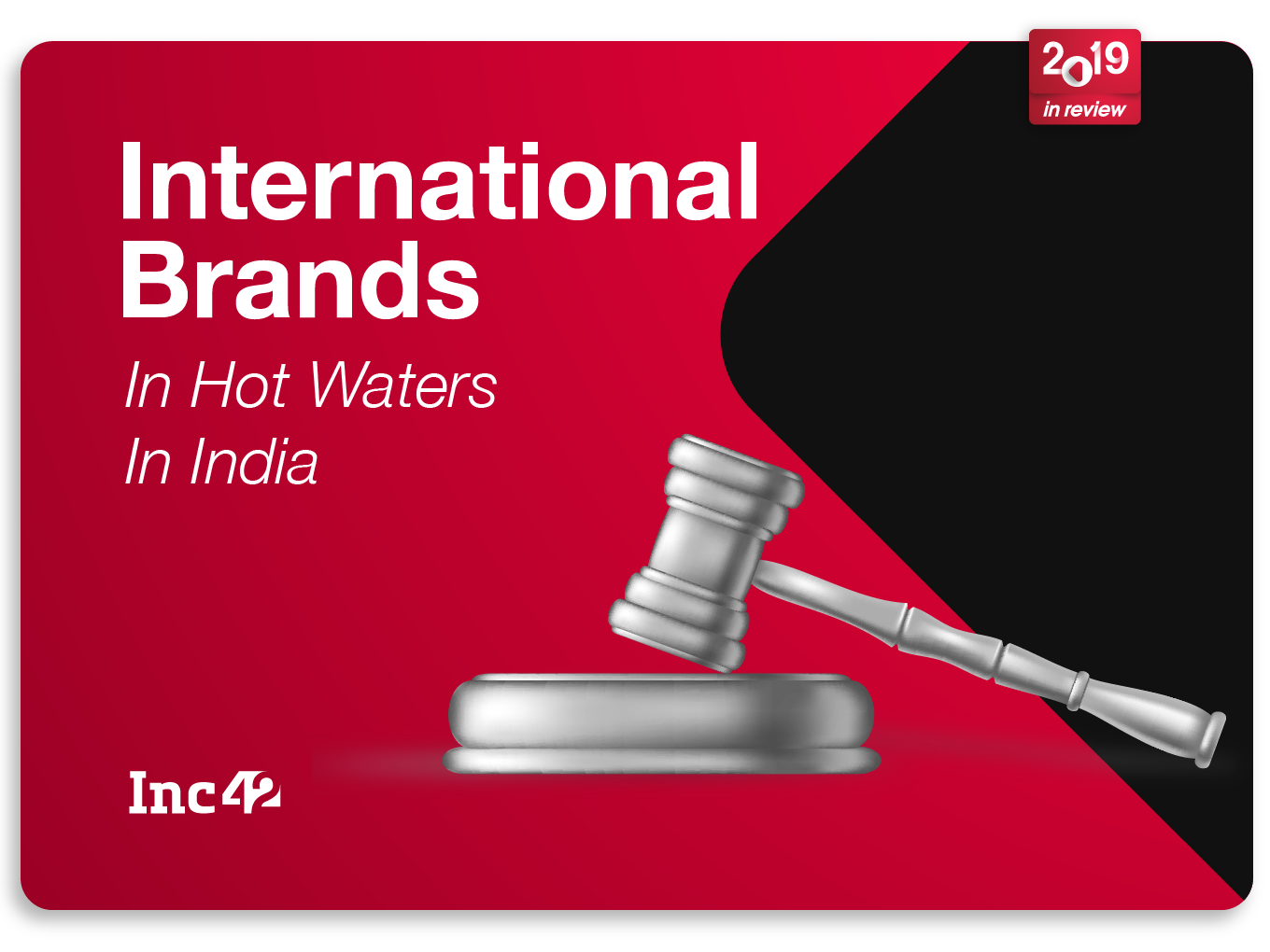 Since the Cambridge Analytic scandal, the Indian government has started to shift its focus towards creating a secure digital environment. However, if the reports are to be believed, the decision has been hurting the investments of foreign players operating in the country.

This article is part of Inc42’s special year-end series — 2019 In Review — in which we will refresh your memory on the major developments in the Indian startup ecosystem such as funding deals and acquisitions, and their impact on various stakeholders — from entrepreneurs to investors. Find more stories from this series here.

With the launch of Make In India in 2014 by Prime Minister Narendra Modi, the Indian government has invited international companies to invest in the upcoming opportunities in the country. In response to this call, digital giants such as Facebook, Google, Amazon, among others started to invest heavily in India.

Though everything was going as planned for these companies, things started to take a sharp turn in 2018 amid the wake of the Cambridge Analytic scandal, which exposed the personal data of around 5.62 Lakh Indian Facebook users.

Since then, the government has started to shift its focus towards creating a secure digital environment. However, it is alleged that this is hurting the investments of foreign players operating in the country.

Moreover, the government also refuses to give and has been reiterating its demand for data localisation in the country, which will make it mandatory for all global companies to store personal data of their Indian users in servers located within the country. Among all the companies, this proposal has hurt WhatsApp the most as its plan of launching a payment service got delayed as it hasn’t yet proved its compliance to data localisation norms.

Moreover, the content available in the online space has also called for scrutiny by the government. Global companies such as Netflix, TikTok, Facebook, among others have been slammed by the government for the presence of explicit content, false information on their platforms.

For the Chinese video-sharing platform TikTok, troubles began in April 2019. At that time, the Madras High Court passed an order to ban TikTok after a two-judge bench noted that the app exposes children to pornography, and makes them vulnerable to sexual predators online.

Following the ban, the Ministry of Electronics and Information Technology (MeitY) asked Google and Apple to remove TikTok from their app stores. The MeitY order impacted only new downloads of the app as those who have already downloaded the app were able to use it.

Moreover, again in July 2019, TikTok found itself in yet another tussle with the Indian government as this time Meity issued a notice to TikTok seeking answers over alleged “anti-national” activities. However, after involving in all these controversies the app came back strongly and now has around 200 Mn users in the country.

Troubles for US-based ecommerce major started in March this year. A PIL was filed by an NGO called Telecom Watchdog against Amazon and its competitor Flipkart seeking a probe into the alleged foreign direct investment (FDI) violations by these companies. However, the PIL was later quashed by the Delhi HC.

Further, in September 2019, Amazon came under the radar of the Competition Commission of India (CCI) as the government kept a close watch on its deep discounting habits.

Moreover, for excessive use of plastic in packaging, a sixteen-year-old boy, in October, filed a petition with the National Green Tribunal (NGT) against Amazon for using an excessive number of packaging materials — cardboard boxes, multiple layers of plastic sheets and plastic bubble wrap.

The recent inconvenience that Amazon faced in India was in November when its plan to acquire a stake in India’s Future Retail fell flat. The CCI had apparently sought more information from Amazon about its acquisition, which is expected to delay the deal further.

Fearing censorship, Netflix, in January 2019, signed a self-regulatory code of best practices under the aegis of the Internet and Mobile Association of India (IAMAI). The organisation had said that the code has been in the works for over a year and establishes guiding principles for Online Curated Content (OCC) providers to conduct themselves in a responsible and transparent manner.

However, the Ministry of Information and Broadcasting, in September 2019, again brought back their concern to bring certification for online OTT content. The I&B ministry along with MeitY, at that time, said that it will soon start organising a meeting with stakeholders to discuss regulating and certifying online content.

One of the earliest players to enter the Indian market, Google also faced a few bumps in its 2019 Indian ride. In January 2019, MeitY had served a notice to Google India to take down all false and malicious contents that vilify the country’s food safety and quality. According to a media report, the ministry has issued the order to Google and Facebook to take down fake contents on the platforms that spread misinformation regarding safety and quality of food in India.

Further, the CCI, in June 2019, had investigated Google, asking details of the agreement between smartphone makers and Google. This matter came in light of a CCI’s probe into the alleged misuse of market share by Android, the world’s leading mobile operating system that is partly developed by Google.

In July 2019, the Income Tax Department of India has called for the scrutinisation of global tech companies like Google whose reported revenues in India, according to a report shared by the department, were not commensurate with the magnitude of their advertising business within the country.

The last hiccup for Google came in December 2019, when the Supreme Court rejected the appeal filed by Google India against the verdict given by the Andhra Pradesh High Court (APHC) in the ongoing defamation case filed by asbestos cement manufacturer Vishakha Industries. The apex court directed Google India to face the trial. The two companies have been at loggerheads since 2009 when Vishakha Industries accused Google of hosting a defamatory article titled “Visaka Asbestos Industries Making Gains” published by a group from Ban Asbestos Network India (BANI), following which the former filed a case against the latter in 2009.

WhatsApp, which is trying to make inroads in the Indian fintech space since 2018, throughout the year faced challenges for the same. WhatsApp Payments is getting delayed because of the government’s concerns over the messaging platform’s data localisation compliance.

Moreover, in May, MeitY had asked for the details of a loophole in WhatsApp, which has put the personal information of the users at risk. The ministry has asked for details such as the number of users affected and the steps taken by WhatsApp to address the issue.

Further, in September this year, Madras High Court asked WhatsApp to confirm whether it is complying with India’s Information Technology Act or not. Notably, HC’s order said, “This Court has also put a specific query…as to whether the said social media has taken a specific stand in one of the replies as to the full compliance of the provisions of Information Technology Act and rules framed thereunder.”

Moreover, the tug of war between the Indian government and Facebook-owned WhatsApp over traceability refused to end down. In a meeting held in September 2019, a Facebook representative had given government officials an alternative to absolute traceability of messages. However, the government has refused to budge.

Since October 2019, WhatsApp has been surrounded in controversies related to Pegasus spyware. The Indian government had said that it would conduct an audit of WhatsApp’s security systems to prevent any incidents of spying by unauthorised elements. For the uninitiated ones, Pegasus spyware, which is developed by an Israeli NSO Group, had snooped over Whatsapp data of academicians, lawyers, journalists and activists in India.

At that time, IT minister, Ravi Shankar Prasad, stated that India’s Computer Emergency Team (CERT-In) had requested WhatsApp for information and wanted to conduct an audit and inspection on its security systems and processes.

From time to time, malicious content on Facebook has invited scrutinisation from the government. Following the same tradition, Facebook, in January 2019, got a notice from MeitY to take down all false and malicious contents that defame the country’s food safety and quality. Additionally, MeitY told Facebook to take down all the content on its platforms which spread misinformation about Indian food’s safety and quality.

Further in March 2019, a 31-member parliamentary panel of the Indian government summoned Facebook representatives to examine the steps taken by social media companies such as Facebook, WhatsApp, among others, ahead of General Election in May 2019. The discussions led to the topic of ‘safeguarding citizens’s rights on social/online news media platforms’.

In July 2019, besides Google, the Income Tax Department of India, also called for the scrutiny of Facebook, whose reported revenues in India were not in line with the magnitude of their advertising business in India.

Moreover, in October 2019, the Delhi High Court had directed Facebook to take down content hinting towards Indian artist Subodh Gupta’s alleged sexual misconduct. In response to the order, Facebook said that it will be cooperating in the investigation. Gupta had filed an INR five crore civil defamation case in the Delhi HC, against an anonymous Instagram handle ‘HerdSceneAnd’ for accusing him of sexual misconduct.

The freedom of expression granted to users on the microblogging platform Twitter has always pinched the Indian government. Finally, in February 2019, Twitter’s public policy head Colin Crowell appeared before the parliamentary committee on Information Technology, to discuss citizen rights over social media platforms. The panel had asked questions about Twitter’s registration status in India, whether the company is registered as a technology or media company, and the number of employees working in the Twitter India office.

Another incident where Twitter was scrutinised by the Indian government came to light when it was asked to limit the anonymity of users and proactively remove abusive content from its platform over women’s safety issues. The parliamentary standing committee for the empowerment of women has also suggested intensification of the process of verification to ensure only real people had accounts.

Spotify, which entered India in February 2019, faced its first roadblock in the country in April. Music label Saregama dragged music streaming giant Spotify to the Delhi High Court over contract negotiations. At that time, Spotify told the Delhi HC that it will remove all the works belonging to India’s oldest record label Saregama India from its platform within 10 days.

For Apple, everything was going smoothly until this year when the Karnataka High Court rejected the company’s plea to quash a show-cause notice which it had raised over cases related to customs duty. Notably, an additional commissioner of customs had dragged Apple to the Karnataka High Court alleging the company of not paying the full customs duty on goods imported into the country.