2018 In Review: Top New Startups That Made The Most Buzz This Year

2018 In Review: Top New Startups That Made The Most Buzz This Year 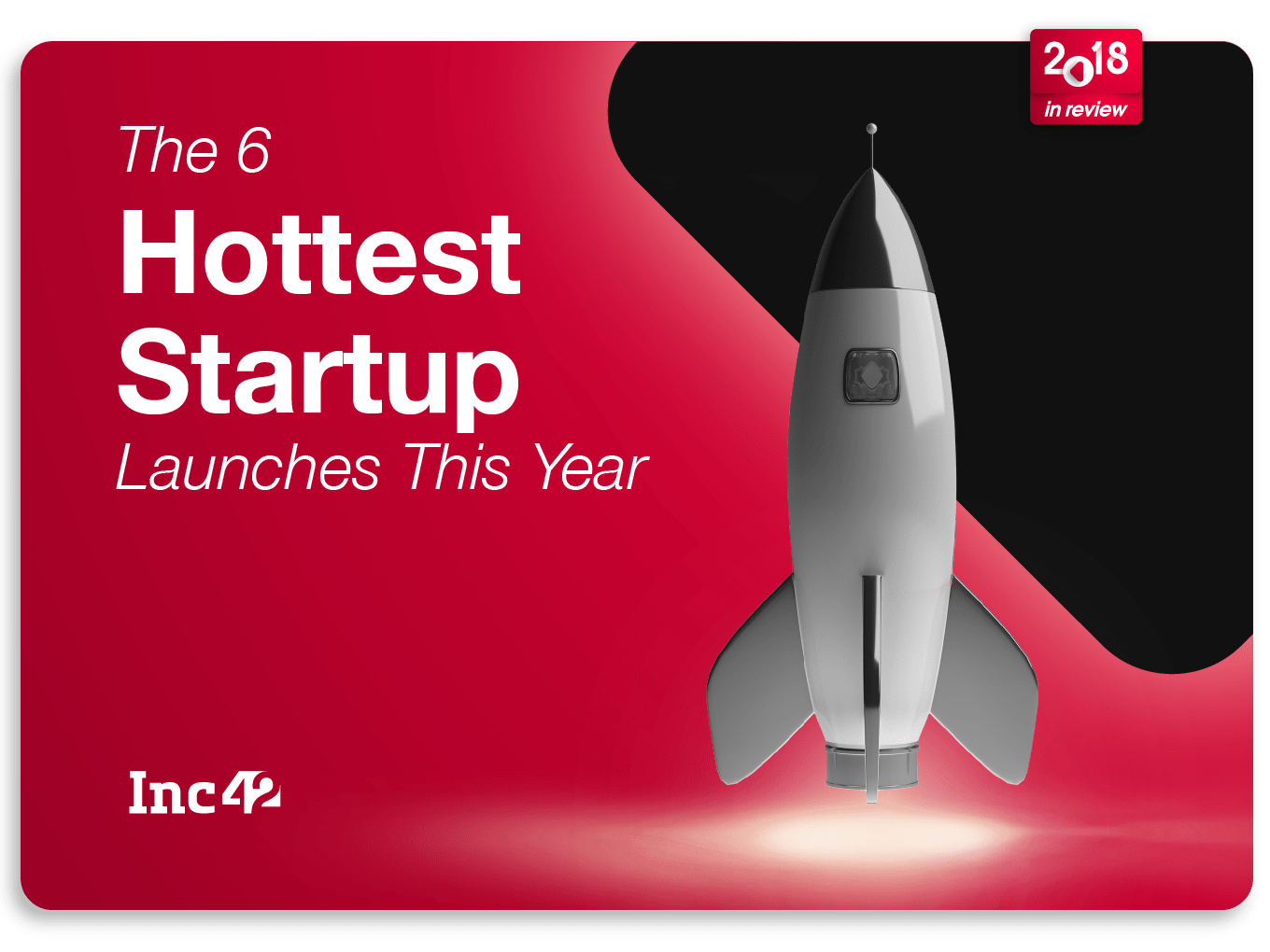 Many entrepreneurs made sizzling re-entries with new startups in 2018

This article is part of Inc42’s special year-end series — 2018 In Review — in which we will refresh your memory on the major developments in the Indian startup ecosystem and their impact on various stakeholders — from entrepreneurs to investors. Find more stories from this series here.

Indian entrepreneurs have been on a roll this past year. The Indian startup ecosystem is brimming with business ideas that continue to enamour investors as well as the global ecosystem.

On one hand, we have prodigies exploring entrepreneurship and people leaving their jobs to turn an idea they’re passionate about into reality. Meanwhile, there are others marking second (or even third) coming, leaving no stone unturned to outdo their last best product or service in the sector.

In 2017, we saw many disruptive ideas that ignited investor, consumer, and business interest. Some of the top startups in India even made it to 42Next by Inc42 — the coveted list of India’s most innovative startups in recent times. This includes InMobi cofounder Amit Gupta’s IoT-based dockless bikes startup Yulu, Mumbai-based deeptech startup ION Energy, and Bengaluru-based digital media startup Clip.

An analysis by Inc42 Datalabs found that in 2018, nearly 3,000 startups joined the Indian startup ecosystem.

Now, as the year comes to a close, we’re bringing to you the best and most innovative startups launched in 2018. Being right at the centre of the Indian startup ecosystem with an eye on every new startup that raises its head, we, at Inc42, are just in the right place to judge which ones disrupted the industry and made a mark.

This list was prepared after evaluating the top startups in India launched in 2018 on criteria such as competition, innovation, funding, customer reviews, traction, leadership, team, and growth rate, among others.

So, here’s presenting the hottest startups of 2018: 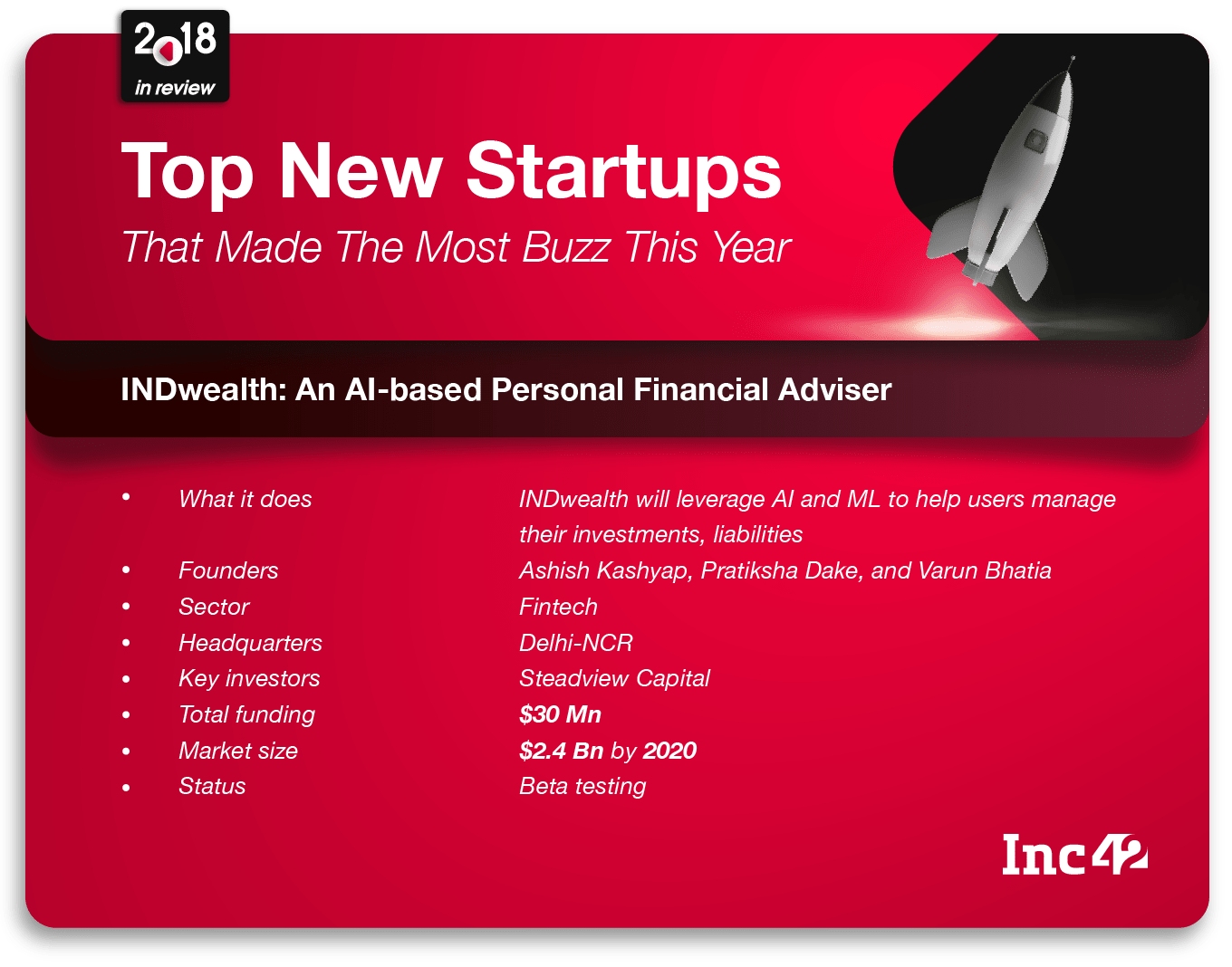 Ten years after launching his first startup — online travel venture Ibibo — Ashish Kashyap exited the group in late 2017. Ibibo was acquired by MakeMyTrip in 2016 for $720 Mn. After his big exit, Kashyap was out of sight but was working on INDwealth, a wealth management startup which will enable users to manage their “financial future”.

At INDwealth, Kashyap and his team are building a personal financial advisory agent, which will offer advice across asset classes, loans, and tax management. INDwealth will offer a full-stack service, re-balancing recommendations on investments based on data analytics.

In October, INDwealth was introduced to the world when Steadview Capital invested $30 Mn in the company. At that time, Kashyap told Inc42 that the product was close to completion. He added they were planning to test it till the launch of the platform on the web, Android, and ioS in January 2019.

With the product launch just a month away, Kashyap has a lot of work ahead of him. The industry, meanwhile, is looking forward to the launch of INDwealth given Kashyap’s reputation for delivering market-changers. 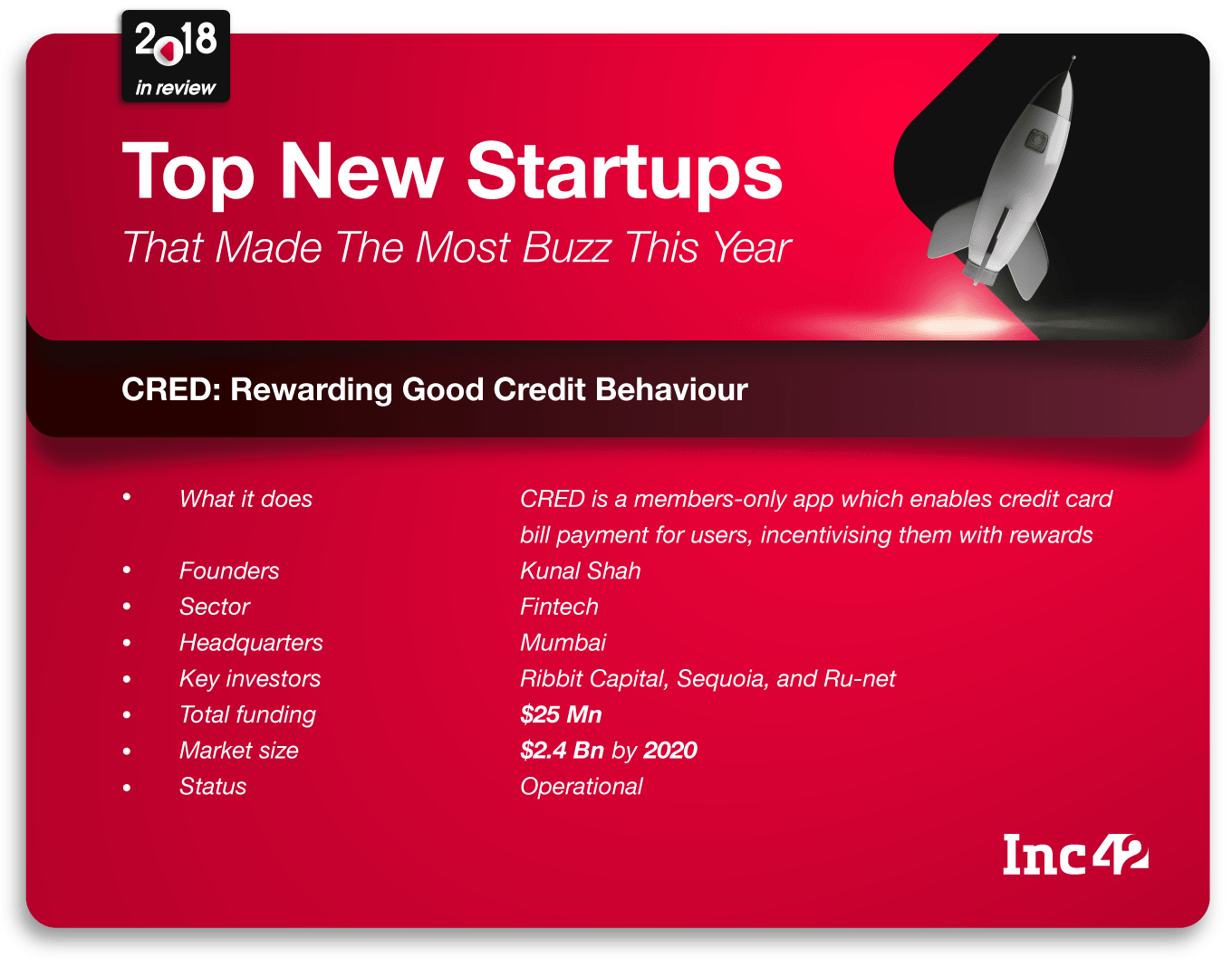 Freecharge founder Kunal Shah is making credit card bill payment a smooth and delightful task.  At least, that’s what the users of CRED say. CRED is a members-only app which rewards you with exclusive rewards for paying your credit card bill.

Shah is a serial entrepreneur, having launched ventures such as PaisaBack (2010), which runs cashback and promotional discount campaigns for retailers, and Freecharge (2011), a coupon-based app for mobile recharge. FreeCharge got a decent exit to Snapdeal for $450 Mn and was later sold to Axis Bank for $60 Mn.

After angel investing and mentoring startups for a while, Shah got back to entrepreneurship with CRED. His new startup is tapping into a lucrative space as till September 2018, 41.7 Mn Credit cards had been issued in India.

CRED marked its start with a $25 Mn funding from Sequoia, Ribbit Capital, and Ru-net. The startup has a 50-member team and has already garnered positive reviews for its UI/UX, easy onboarding, and rewards system. The company offers its services to select users who have a CIBIL score of above 750.

Interestingly, CRED has also signed up with brands like BookMyShow, ixigo, etc, to provide exclusive rewards to its users.

The plan for the company, in the long run, is to build its consumer base through credit card bill payments and rewards and then develop high-end loyalty and offer other services, including insurance.

Focused on scaling CRED at the moment, Shah has put plans for developing a revenue model on the backburner and is looking to think about it only a year down the line. He is currently working on getting the credit card generation warmed up to CRED with a view to build the base for a revenue opportunity of $1-10 per customer. 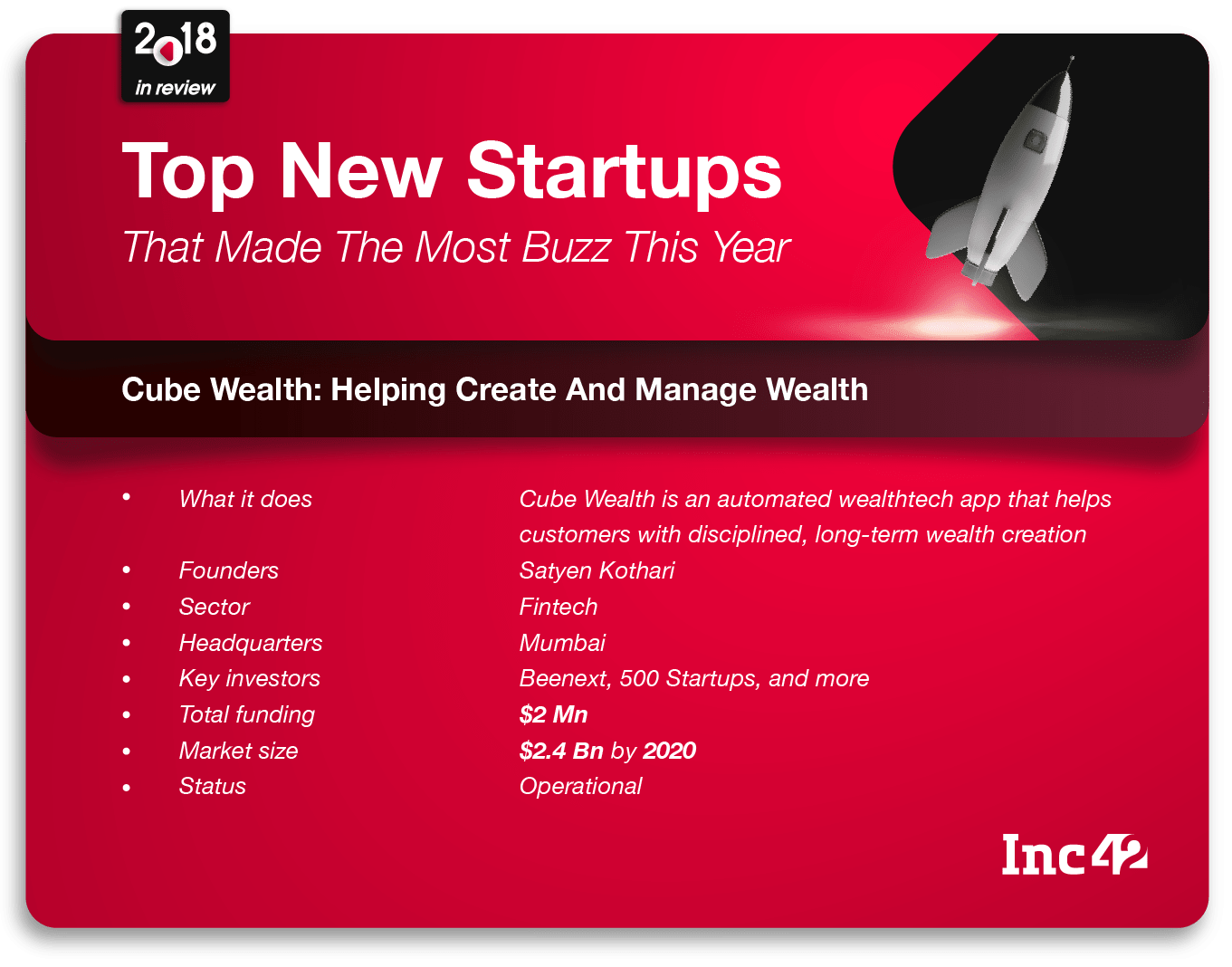 Satyen Kothari made his mark in the Indian startup ecosystem in 2011 when he launched payments company Citrus Pay, which he sold to PayU India in 2016 for $130 Mn in an all-cash deal.

This year, he ventured back into the ecosystem with his new venture, Cube Wealth, a subscription-based automated wealthtech app that helps customers plan their finances. It enables users to connect with an investment adviser to help them do their financial planning.

Over the last few years, individual investors have increasingly expanded their portfolios to include diverse financial instruments, beyond debt. According to the IBEF, the mutual funds industry in India has seen rapid growth in its total AUM which stood at $375.9 Bn between April – August 2018.

Cube Wealth was also part of the 2018 edition of the most coveted list of India’s most innovative startups — 42Next by Inc42. 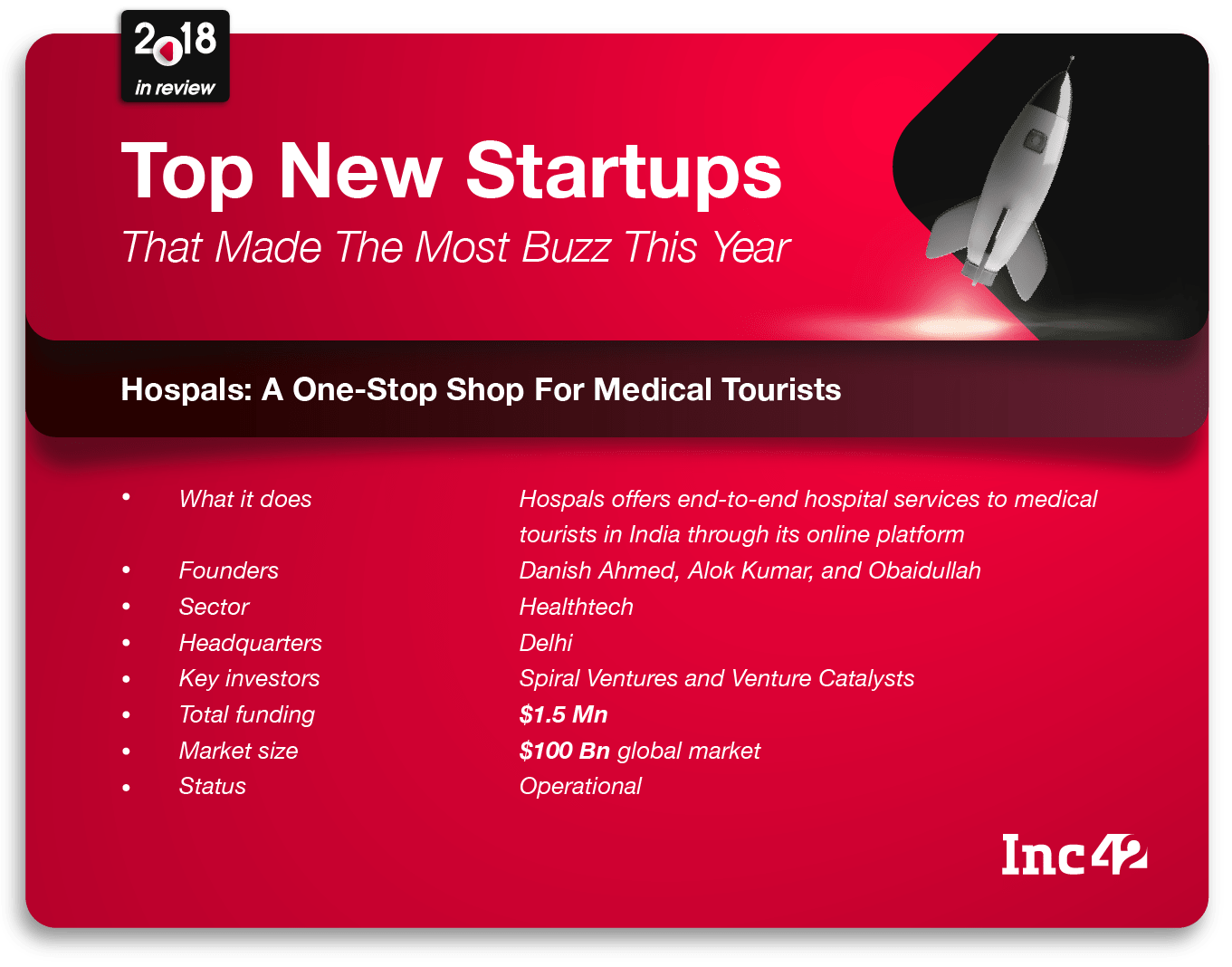 Yebhi cofounder and Paytm’s ex-VP Danish Ahmed launched his new venture — a medical tourism startup called Hospals — along with cofounders Obaidullah and Alok Kumar, who were the CEO and COO (respectively) of Al-Shifa, a Delhi-based medical tourism company.

Ahmed saw success with his first venture, Yebhi.com, which he founded when he was just 21. Yebhi went on to raise $40 Mn and later sold its operations to Flipkart, now a Walmart company.

In 2015, Ahmed started his second venture, Shopsity, which was acquired by Paytm in 2016. He joined the digital payments company as vice president, omnichannel commerce. In April 2015, he also launched a startup called Feedsomeone, a mobile-based charity.

His new venture, Hospals, offers end-to-end hospital services to medical tourists in India through its online platform, connecting them with the best hospitals, helping arrange long-stay accommodation, and providing other services. The platform also offers value-added services such as managed cabs, hotel and flight bookings, etc, besides auxiliary services such as estimates of medical procedures, visa service, and translators, among others.

Hospals raised $1.5 Mn in funding from Spiral Ventures and Venture Catalysts (VCats) and is targeting a gross merchandise value (GMV) of $10 Mn by the year-end.

The startup is already managing more than 200 patients per month and claims to have served over 6,000 patients from 14 countries. It has already expanded across former-Commonwealth of Independent States (CIS) countries.

Cross-border healthcare is a $100 Bn market globally. India, the fastest-growing country in this space, is expected to generate $9 Bn in revenues by 2020. 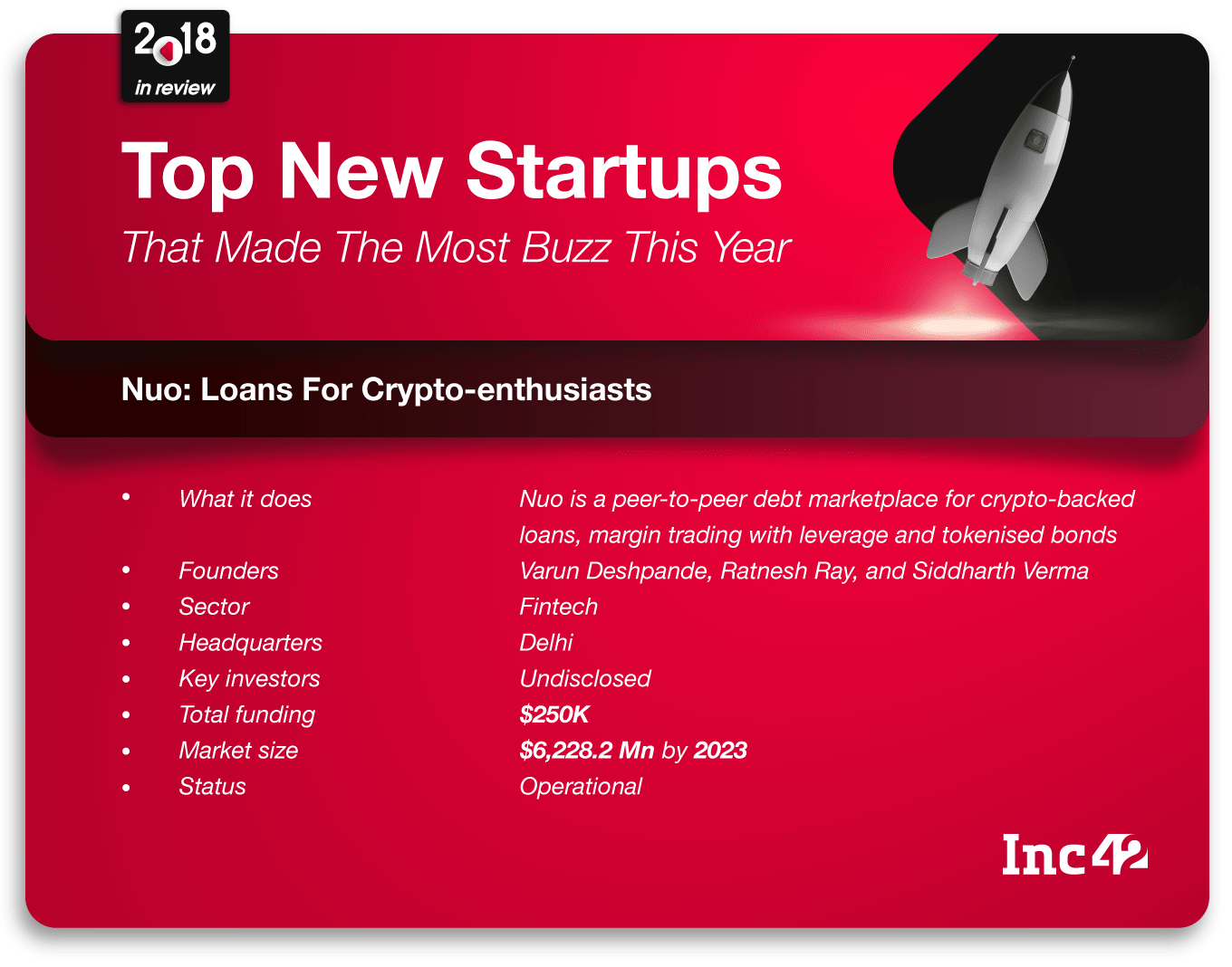 Founded by Varun Deshpande, Ratnesh Ray, and Siddharth Verma, Nuo is a decentralised crypto banking platform for emerging markets. It acts as a financial control centre to store, spend, and manage any cryptocurrency of your choice.

The company enables users to avail of global financial products and services at one place via Nuo Play. It claims to have more than 10K play store installs.

Nuo claims and aims to be a transparent bank, driven by blockchain smart contracts and governed by predefined conditions which are always publicly available.

Its product — Nuo Lend — provides collateral-backed loans to users in a decentralised way. The bank neither underwrites the borrower nor sets an interest rate. The borrowers choose an interest and repayment structure best suited to their needs and lenders can fund a loan based on the returns they expect.

While on one hand, startups have realised the potential of blockchain and are trying to put it to use in various industries and applications, the RBI has put restricted banks and payments companies from dealing with cryptocurrency related entities. Amid the cryptocurrency ban, Nuo’s crypto lending offering is a tough challenge to take in the Indian market. 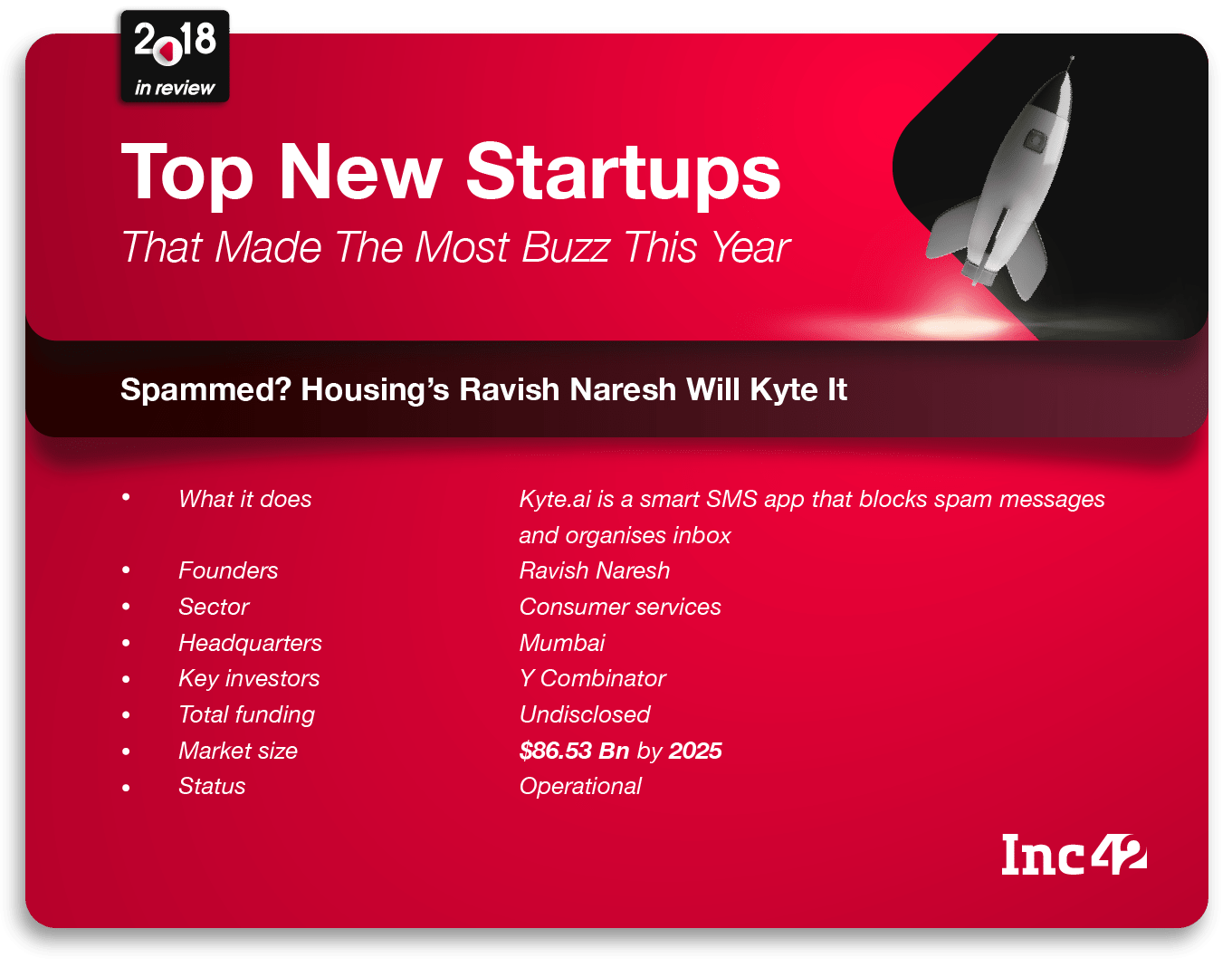 Mumbai-based real estate search portal Housing.com, founded by Ravish Naresh in 2012, is well known in the startup ecosystem but didn’t quite have an impact in the real estate tech sector. After bidding adieu to his first brainchild, Naresh has now launched a smart SMS app — Kyte.ai.

Kyte.ai specialises in blocking spam and automatically organises the user’s inbox. Some of the features of Kyte.ai include an inbuilt spam blocker that is updated in real time. Users are only notified about important updates such as OTP, online transactions, travel bookings, and banking alerts.

It further gives users an easy way to do an SMS-backup and restore. Kyte also comes with easy-to-use banking APIs of all important banks in India. Users can carry out balance checks, fetch mini statements, change ATM pins, and do a lot more by just sending an SMS.

US-based startup incubator Y Combinator has invested in Kyte.ai as part of its summer cohort 2018. Y Combinator (YC) invests $120K in startups for a 7% equity across two batches every year.

Application-to-person (A2P) SMS is the communication that takes place between an application and a subscriber over messaging services for various purposes. The A2P messaging market is expected to touch $86.53 Bn by 2025, expanding at a 4.2% CAGR from 2017.

The Indian ecosystem has been innovating at a breakneck speed. In 2018, new startup launches saw two clear trends: While serial entrepreneurs made their way back into the ecosystem to create innovative solutions for a new set of problems while new founders also came forward with brilliant ideas to solve both pressing and niche problems.

Most eyes, however, are on the new startups from serial entrepreneurs, given their previous reputation at delivering successes (or failures in some cases). In 2019, we’re likely to see more investments in their ideas, even as they focus on growth, customer-centric solutions, and further diversification.

Also this year, the Indian startup ecosystem will be waiting with bated breath for the new ventures of the Flipkart cofounders — Sachin Bansal and Binny Bansal, who exited from the company after the Walmart takeover.

While Sachin has registered a new venture — BAC Acquisitions Pvt Ltd — and is expected to invest in agritech and fintech startups Binny is reportedly looking to help early-stage startups scale up with XTo10X Technologies. Interestingly, both of them have aligned with their old friends for the new ventures.

Looks like we can expect another round of innovation and a lot of startup action in the coming year!