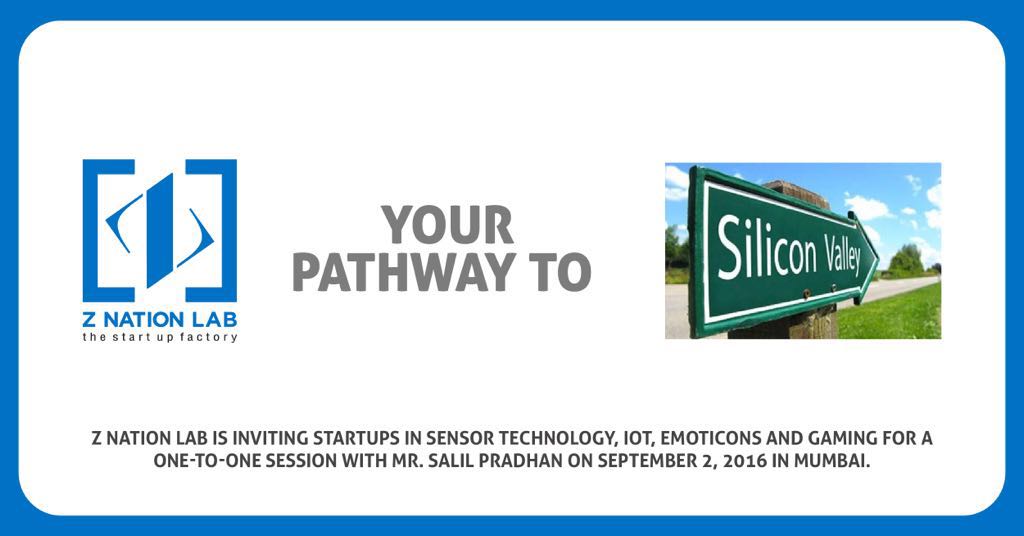 Z Nation Lab is inviting startups for a one-to-one session with Silicon Valley expert and live pitching session with VC firms in Mumbai.

Z Nation Lab is an accelerator and co-working space in Mumbai with the focus on the India – US Corridor. They have team of prodigy mentors with 80 plus patents registered in their name and specialize in IOT, Sensor technology, big data, robotics, Med tech, Education, Mobile and Payments.

At Z Nation Lab they are predominately looking at Enterprise startups or a cutting edge technology product that has potential to go global. Z Nation Lab has a very strong nexus to Silicon Valley with majority of their board based in the US and their partnership with Access Silicon Valley enables them to connect startups and investors in more than 25 top startup destinations in the world. With a Washington DC based Govonomy, Z Nation Lab helps technology startup’s growth into the US government markets and work with the US Government.

Z Nation Lab provides startups with a world class ecosystem at their state of the art co-working facility in Mumbai and affiliate centers in Pune, Jaipur, Bangalore, Chandigarh, Indore and Chennai. Z Nation Lab’s office in Silicon Valley can help Startups get the much needed global recognition and reach to the Silicon Valley.

They endeavor to bring a complete ecosystem to Startups by providing them a team consisting of a Pitch Coach, Mentors, Chartered Accountants, Lawyers, Application and Web developers and Social Media marketing support, all at Z Nation Lab.

Anup Mehta, Co-Founder at Z Nation Lab said: “This is a great opportunity for startups in India to get insights and get mentored directly from world renowned Silicon Valley veteran.”

Salil is a Venture Partner with Draper Nexus Ventures and an advisor to corporate LPs on product strategy and M&A. He has been frequently quoted by leading publications and recently named as top 10 influential people in Silicon Valley by Huffington Post .

Salil has been issued 54 US patents, in areas related to sensors, IOT and computer systems. Salil spent 10 years at Hewlett Packard in a variety of roles, including the position of CTO at HP’s Enterprise RFID / IOT business. Salil’s all-round experience as an entrepreneur, venture capitalist, product executive and corporate strategist makes him a sought after panelist and judge at venture pitch events.

He serves on the Board of many tech startups companies like Momentfeed Inc., Chirp Microsystems, Notion (Hetnotion.com), is a mentor at the Plug & Play Tech center and a Cincinnati based Brandery, and an advisor to a number of tech startups. He has also served on the advisory boards of UCLA’s WINMEC and UCSD’s Center for Wireless Communications.

Khushi Jain, Co-Founder at Z Nation Lab said: “Startups in India will now have direct access to Silicon Valley members and resources. Which will be the key to getting global recognition and the right platform for writing their success story.”

To get the chance and secure a place for a one to one discussion with Mr. Salil Pradhan, Send us a short description of your company at [email protected]

Z Nation Lab is inviting startups for a one-to-one session with Silicon Valley expert and live pitching session with VC firms in Mumbai. ...

All early stage star-ups are cardinally invited to present themselves in a great panel of Foreign investors. Please complete the registrati...

Lecture series- How to Start a...

Ever wondered How to Start a Startup? Success mantras to be demystified by masters of Startup space at IIM Ahmedabad. Here is the link to t...