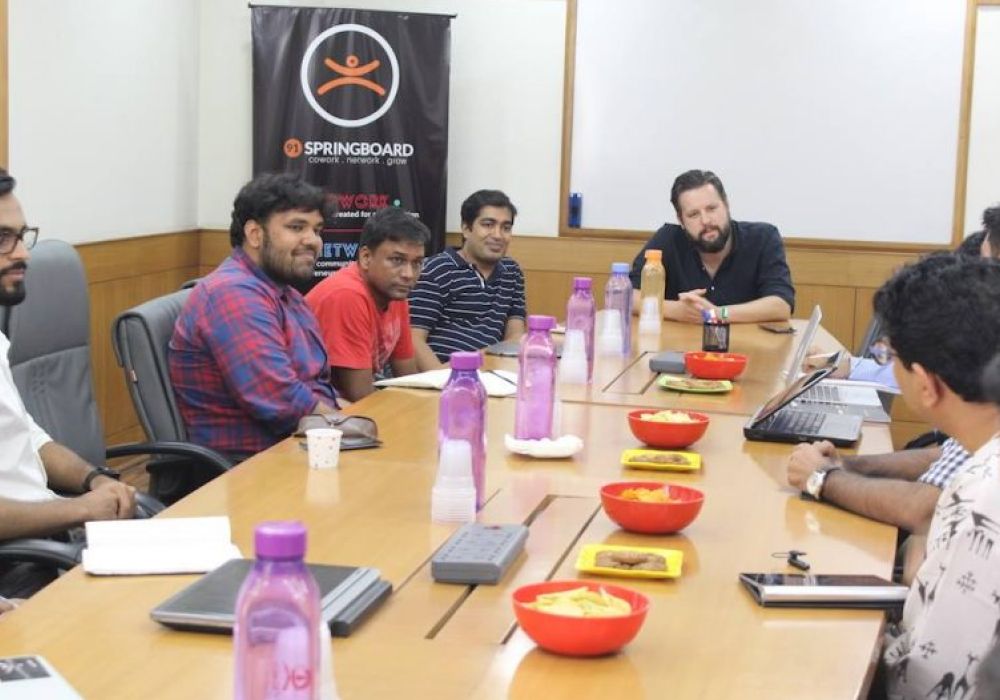 We were extremely privileged to have Alex Schleifer, VP of Design, Airbnb, visit our hub recently to have an insightful and immersive session with us and a few of our members.

We’re not sure how many of you would know this but Airbnb is one of the few companies in the world to be founded by two designers, Brian Chesky and Joe Gebbia, and one engineer, Nathan Blecharczyk. This is quite a rare phenomenon in Silicon Valley as almost all startups are founded solely by engineers.

In fact, the idea of Airbnb came about when Brian Chesky and Joe Gebbia rented out mattresses in their loft to help them make rent during the 2007 Industrial Design Conference. Now you know why Airbnb is so design-oriented and why Alex’s job is one of the most coveted in the world.

He joined Airbnb with 20 years of experience as both, an engineer and a designer. His last stint was at Say Media, where he was the Senior Vice President and Creative Director. He joined the organisation after Say Media acquired Sideshow, a digital design firm founded by Schleifer.

Alex heads a design team that consists of over 100 people. Half of the team is UI/UX designers and the other half are researchers and content creators. Airbnb is trying to bridge the traditional gap between designers and engineers and get them to work together and in sync instead of in separate silos.

So, What Do Designers Do Differently At Airbnb

Well, one major thing they do differently is not use Photoshop as much as they use markup platforms for interface design. Instead, they encourage you to find a framework and build every component from scratch. This would definitely take longer but can then be used infinitely.

Hence, encouraging you to look at design in the same light as engineering; something you spend time and money on once and for all like a long-term investment.

For example, at Airbnb if someone requires screen 1,2 and 6 from module x, they just have to go pick those from the database (which everyone has access to) and fit them into what they’re working on as opposed to starting from scratch every single time which ends up being a long drawn process.

Airbnb has made major shifts in the way their engineers think too. As an organisation, they firmly believe in thinking of solutions and ideas for one person as opposed to thinking on a much larger scale.

They say, solve a problem for one and then later figure how that can be applied to a 1,000. Traditionally, engineers always think in terms of scale. You give them a problem and they will go about creating structures and modules that will fix that problem for a 1000 people. This is discouraged at Airbnb and engineers are made to think for one person!

How Is This Helping Airbnb

Well, they solve problems globally. Airbnb has a global business model and mission. The number of segments across the 191+ countries they’re present in are innumerable.

For example, the system to classify bed types took them 12 weeks. You’d think it’s something that shouldn’t take more than a few hours, a day at most. However, each country has its own bed types like the California King or the Texan King in the US and the Double Extra-long in Japan.

Another very interesting thing we learnt was that Airbnb is uniquely organised.

Usually, companies working in one of two ways: either they have a few designers in each product team or there is a core design team that rotates based on projects. Airbnb does neither.

Instead they have gone with the approach of putting design, engineering, data science and product management on equal footing. Each team has leaders from each discipline which help make cohesive decisions that guide to the best approach for creating products.

Airbnb For The Newbie

This session was a great learning experience for us as well as all the attendees. We at 91springboard are constantly hosting such high value events across all our hubs. Do drop it to get your entrepreneurial fix!