What Does It Feel Like To Be A Self-Made Millionaire Under The Age Of 25?

What Does It Feel Like To Be A Self-Made Millionaire Under The Age Of 25? 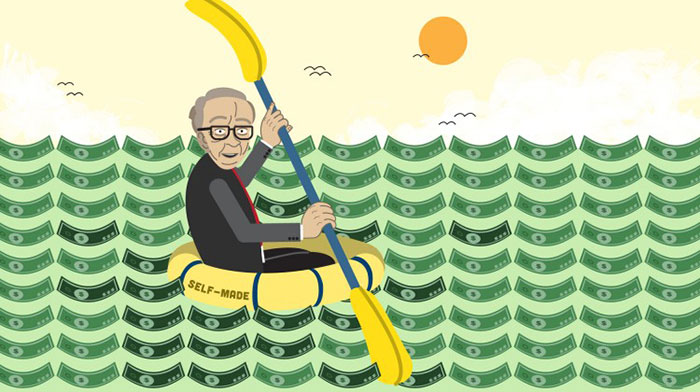 I’ve been featured on the homepage of Yahoo as a millionaire, offered 3 separate reality TV shows — including that terrible Millionaire Dating one on Bravo. I bought a luxury car with cash on my 16th birthday, owned a house a few years later.

Hitting $1Mn was a non-event, I don’t even know the exact date it happened. The dividends just all of a sudden added up, and it was there. I celebrated by buying myself a used Rolex. A few years later I also did a vacation where I “tried to spend as much money as possible” — but I still found myself gravitating towards “values” on the wine list rather than blowing it all out by spending thousands on a bottle, which I thought was silly.

Hitting 8-figures was a bit more substantial, I knew it meant I’d never, ever have to work again unless something went terribly wrong. The closing call with the law firm was one of the biggest anti-climaxes of my life. I had already “owned” the money in my head years before hand, so seeing it crystallise on my bank statement didn’t make a huge difference, except that it freed me up to start tackling bucket-list items.

I had been postponing so many experiences with the idea of “doing it at some point in the future when I made it” that I just started tackling them one by one. Superbowl. Sundance. Tomorrowland. Africa. A month around Europe. 3-Star Michelin dining.

The only “awkward” thing I keep running into repeatedly, is other people’s comments about wealth or money. Whether it’s a tour guide pointing out a hotel that costs $1000/night and everybody in the tour bus gasps (and it’s where I’m staying) or taxi drivers making snarky comments about millionaires, or people suggesting it’s my “lucky day and I should buy a lotto ticket” — I run into it repeatedly and predictably, but I always tend to keep my mouth shut and not say anything.

Along the way, the most interesting phenomenon has been “adaptation”. Moving from a $300K apartment to a $1m one barely made a difference after the first month.

Jumping from that to something 60% bigger, and oceanfront (on the beach) that was worth over $2m barely made a blip after the first few weeks.

Buying a fancy, fast sports car — yes, I did it, but again people tend to massively overestimate the “joy” or “happiness” that a particular item will give them vs. reality. After a few weeks, it just sits there. The anticipation, wait and planning is almost better than the realization of the event itself.

When they say “it’s all about the journey, rather than the destination” that’s absolutely true. The part that I’ve most enjoyed is hanging out, meeting and become friends with amazing, successful, smart and ambitious entrepreneurs. It’s inspiring, invigorating, and just plain fun.

I still don’t have a private plane or NetJets card, I fly economy-class around North America most of the time, I don’t even have a maid to do my cleaning. I prefer to buy clothes when they go on sale, and I cringe at people who waste thousands on Gucci-this or Prada-that. I upgrade my MacBook every few years, not every model. I still use an original iPad. I’ve never bought a new car (except for my parents). The biggest TV in my apartment is 42″.

Experiences, even when they cost thousands of dollars a day, so far have been my best investments. I’ve stopped postponing as much as I used to. The best time is “now”, but to be honest, I could have done many of these things much earlier, and on a lower-budget, and probably still had a great time.

Try this as a test—

Make a list of all physical things you would buy if you had $10 million. Let your mind roam free. Don’t limit yourself to the reasonable.

And if you worked a decade or more to earn that money, you’d cross 90% of the items off that list anyway. There’s amazingly few physical things that are worth spending money on once you’ve covered the basics. If I gave you $100K in cash and told you to spend it in a day, you’d be hard pressed unless you bought jewellery, or a car.

Gadgets? Clothes? A bigger TV? Unless money fell from the sky into your lap, you’re probably going to be quite pragmatic about what you invest in. There’s a reason why most lottery winners end up bankrupt within a few years.

The utility of money once you get past a certain threshold is very limited. And I honestly think that most people who want to be “rich” don’t really mean it. What they are really saying is that they’d like someone to hand them a check.

But when push comes to shove, and there’s hard work, sacrifices, and tears involved, they’d rather spend 4-hours a day watching TV along with the rest of the country.

It’s a solitary journey. You’re the youngest and most underdressed person in any restaurant you go to. You give money to parents who can’t hope to offer you career advice. After achieving more than most people ever achieve financially, what are you supposed to do- retire for the next 50 years? Not an option- you are not, nor have you ever been, like most people. You can’t hold yourself to their standards or look to them for cues on goals to strive for- can people your age really be considered your peers when they are so different? For most, setting up 401K’s and avoiding credit card fees is gospel, whereas for you it’s almost not worth the time relative to what else you could be working on. Normal people are on a path containing marriage, babies, some career ladder. The comfort of a patterned route is barred from you: you alone must write your next act because no one can afford to hire you.

Most people dream of a house, a family, money for vacations. When you can have all of that at an age before you’re ready to get married, what else is there to reach for? People think you’re lucky because they imagine you share the same American dream, because they don’t know what really drives you. What would be so terrible about settling down, traveling the world, learning about wines, maybe writing a book?

The answer to this question is a slow, slow terror. Your whole life you’ve monotonically increased in awesomeness. What if that trend has ended? What if you peaked in your 20’s? Will you ever be able to surpass your previous success? Or was your success due to your reckless youth, which is inevitably fleeting? What’s the difference between dying a millionaire at 25 and a millionaire at 75? What will it feel like to look back years from now and think you haven’t changed at all, instead of marveling at how far you’ve come? Shall you live and die like a beast, quiet, leaving no mark on the universe?

Editor’s Note: This post appeared as an answer on Quora.