1992, Ukraine. It was the worst of time for the economy. Jan Koum was 16. His mother, hoping to find a better future for her son, decided to immigrate to the United States. There wasn’t a lot waiting for them in Mountain View, CA when they arrived, but a government subsidy helped them get food stamps and an apartment.

Jan worked as a cleaner at a grocery story, his mother babysat. His father stayed behind in Ukraine hoping to join his family shortly. 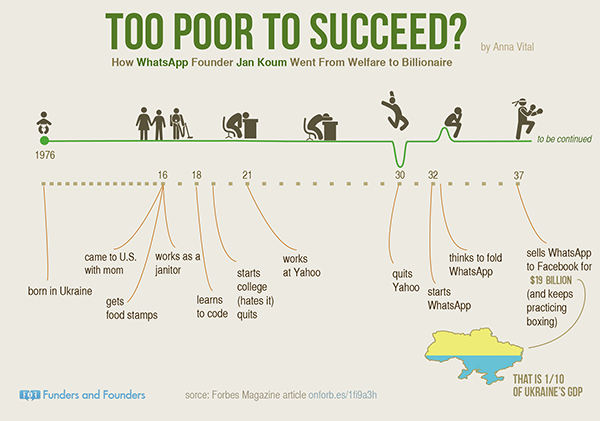 By 18, Jan knew he wanted to learn to programme. The cheapest way to learn was to get some books and study on his own. Lacking money to even buy the books, Koum bought them from a used book shop and returned them when he was done. Working and going to school at San Jose State at the same time, Koum quickly discovered that he hated school. He dropped out.

Working at Yahoo, he met a kindred spirit, Brian Acton, a straight shooter with a low tolerance for bullshit.

Koum’s mother died of cancer in 2000. His father died in 1997 back in Ukraine. He was now alone. He found a true friend in Acton, who himself was going through hard times having lost his investments in the dot-com bust. The two were not enjoying things at Yahoo. Suspicious of working to create “better advertising”, neither was enthusiastic about where Yahoo was going.

In 2007, Koum and Acton left Yahoo. But they weren’t sure what to do next. They took a year off traveling around South America to refresh their minds. But no ideas really came to mind, until January of 2009 Koum bought an iPhone. The app store was just a few months old, but Koum saw it starting an entire new industry. He started thinking about building an app.

Over tea in his Russian friend’s kitchen Koum explained his idea: show status updates next to people’s phone number’s in the address book. The statuses would show if the person was available, away, the battery was low, etc.

Koum could programme the backend, but he needed an iPhone developer. His friend introduced him to a Russian developer he found on a freelancing website.

A month later, ‘demo’ing the app to his friends, Koum was taking notes on the bugs and fixes it needed. Grudgingly, he admitted it was probably time to go get a job. Acton persuaded him to give it a few more months. No one, not even Jan’s friends, were using the app till June 2009, when Apple launched push notifications.

Now when a friend changed their status, all the other friends were notified. First, they did it to joke around. But Koum realised he had just created an instant messaging app. When Koum released the second version of the app, he was looking at 250,000 users minimum. Acton was still unemployed at this time. Koum offered him to be a co-founder. Acton got his friends from Yahoo to invest $250,000.

In hindsight, founding stories like this can seem almost inevitable. But thinking back to how the situation looked at the time, Koum had many reasons to not continue building what eventually became an app with more than 1 Bn users — WhatsApp.

[Editor’s Note: This article was written by Anna Vital and originally published at Funders And Founders. Copyright 2014.]