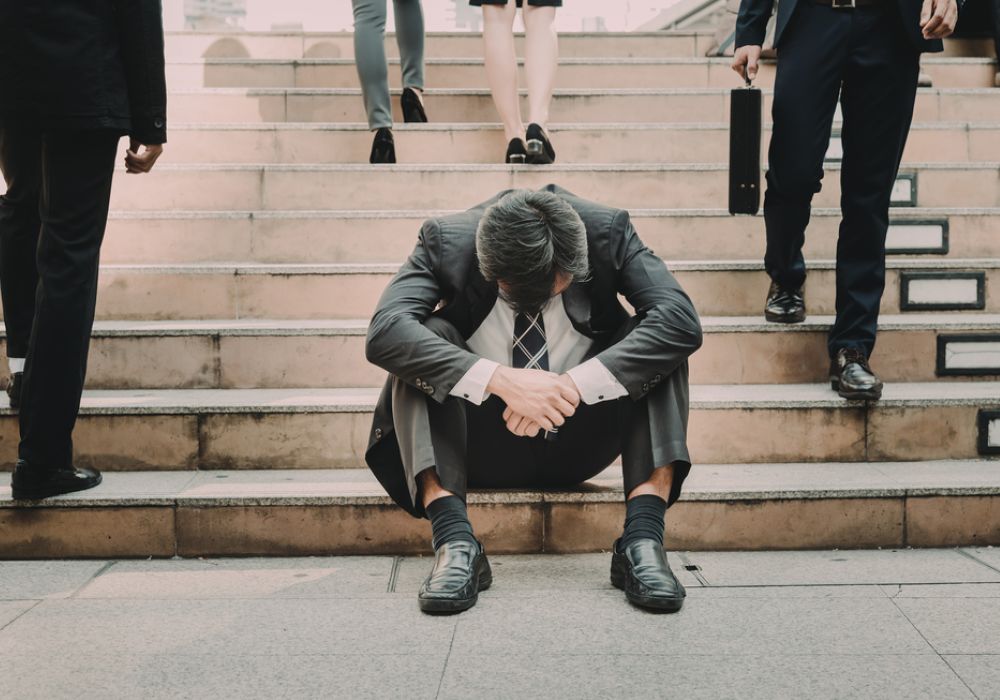 My resume: I begged the teacher to not give me an F, for failure, so, out of kindness, he gave me a D-. Only then did I have the minimum GPA to graduate college. I tried to write several novels but none of them were published. I pitched several TV shows but none of them made it to the air.

I lost my house, my friends, my business, and the second time this happened (and the third and the fourth), my wife and kids.

I started another company and raised a lot of money but I didn’t even know what we did. I got kicked out and the business slid to nothing.

One time I forgot to pay the IRS. For the 17th year in a row. I wanted to kill myself when they knocked on my door. I wanted to date the IRS agent but she knew too much about me.

I’m just saying this to establish some credentials. Failure is a deck of cards. You can shuffle and pick out the card you want. 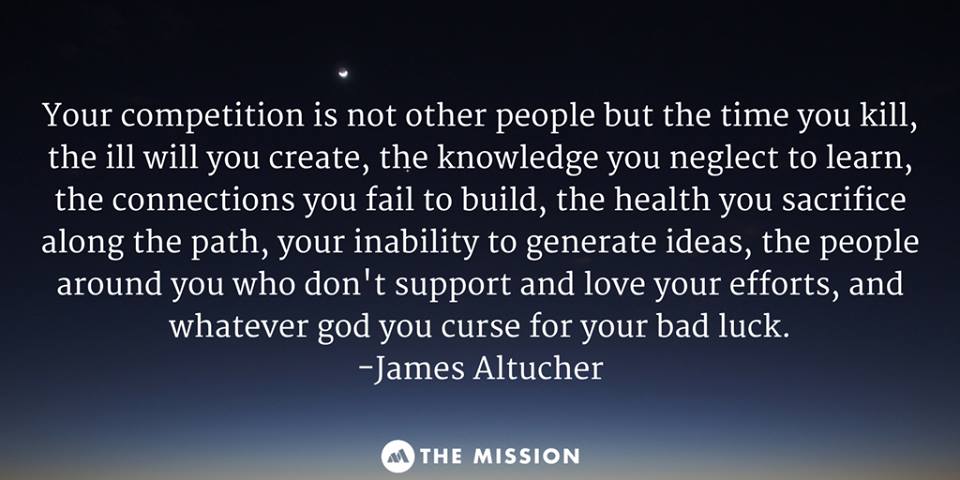 Here are the cards. And if you can avoid the nine ways to fail, there’s one way to avoid failure.

One time I was staying out too late. I was around people who weren’t my friends. I was always stressed.

So I would get sick, or not have enough energy. I was so focussed on my stress and anxiety that I could never get enough energy to get out of bed in the morning.

I was just thinking of one time but as I wrote this I started thinking of another time. Anxiety and fear and stress and the wrong people will drain you of energy.

When I let a desire for money rule my choices instead of just desire, my choices would drain me of energy.

You can’t start a successful X if you are sick in bed. Or looking out the window, wondering what cave everyone’s smile crawled out of.

Lack Of Creativity Leads To Lack Of Success

None of this was original. The iPhone had to be a phone. How else would it connect to the phone networks? How would it have a microphone? How could it be used to talk to people?

And then he twisted it. He turned it into something nobody had ever seen before. A sculpture of a phone. And let’s listen to music on it. And watch TV. And play games.

Now a phone is a computer with a rarely used phone app on it. And Apple will be the first company to hit a trillion in value.

I always say, to exercise the idea muscle, write ten ideas a day.

But, also see, here are some easy next steps can you make to execute on each idea.

Elon Musk wrote down an idea: build a rocket ship to Mars. Then he hired physicists, read every book on rocket science, and started to build.

Richard Branson needed a plane. So he got a deal to lease a plane, put up a sign in an airport where he was stuck and offered to sell tickets, got enough money to lease the plane, and thought to himself: this is an airline.

Before that, he was a magazine publisher. Now he started an airline from scratch. One of the first people to ever do that.

Write down 10 ideas. Every day. Write down the next EASY step for each idea. Then throw away the list. It’s just practice. The creatives, the ones who practice, avoid the failure of the non-creatives.

Should I stay in the relationship that is easy and comfortable or should I have not?

It’s a cliche to say “we have one life to live.” But cliches are easy truths.

It’s easy to try something. Decide if it makes you a better person or not. And then either continue or go back to “Creativity”.

Every book needs a plot, a story, characters, a cover, a design, distribution, marketing.

And one detail off on any of these makes a failure. If the customer is not happy, they tell others.

If you don’t have a good cover, your book won’t sell.

If you don’t get permission from the city to shoot at your location, you failed at making a TV show.

If you don’t research a guest, your interview podcast will be a disaster.

If you don’t have a punchline, and a premise people can relate to, your standup act will be met with dead silence or worse (usually worse).

I was bad at follow up in my first business. I never called the day after a good meeting and said, “That was a great meeting, here’s a proposal on next steps”. Careless! I had to hire someone to help me with that.

Laziness Can Lead To Failure

I wanted to publish another book. But my prior book hadn’t done so well so publishers weren’t returning my calls.

I wrote the book anyway. Still no publishers. So then I hired a book designer. Then I got advice about marketing so I could do it myself.

I got three different people to edit my book. I wrote 100 drafts of the book.

I did all the marketing. The marketing was crazy. I sold the book on Bitcoin only before I officially released it on Amazon. This got me on a bunch of TV shows.

Then I went on 20–30 podcasts. Gave talks. This was four years ago.

Yesterday, I was on a podcast talking about this same book. I market it every single day. 700,000 copies later “Choose Yourself” is my most successful book and the publishers are calling me.

The book before that, I was lazy. I felt like the publisher should market it. Should edit it. Should make a great cover.

They didn’t and I was too lazy to do something about it. And not detailed enough to point out to them where they could be better.

Sometimes, “lack of focus” is good. But only if you can connect the dots. If the TV show would promote the business then that connects the dots.

Focus is not about doing one thing. It’s about doing many things that connect and combine in ways nobody ever thought of before.

Focus is about connecting the dots so that one vision emerges.

It’s not about falling down a rabbit hole where nobody sees you again.

One time I wanted to learn to be an investor. I saw some people were day trading and making money so I figured I’d try.

It was a disaster. I was just following others and I thought I was smart.

So I reversed that. I said, “I’m stupid” and I said, “Don’t follow other people”.

So I read everything I could about every investment strategy. I worked for some of the best people in the business ever. I tried with small amounts of money (because I was too stupid for big amounts) every strategy to prove to myself I really understood it.

I started to write about it. Because to gain knowledge you need PLUS, EQUAL, MINUS: people to learn from, people to bounce ideas off of, people to teach so you can keep beginner’s mind and learn more.

Every day for fifteen years I increased my knowledge about money. Money is hard! And I guess I’m still increasing it.

They made me an offer I couldn’t refuse. Actually, I did refuse it. But then they put out a press release saying I was an investor.

I helped them out. The company grew. It was a great company, great clients, good employees.

But one shareholder was a criminal.

And the people who introduced me to this company were also no good. Drugs, prostitutes, bad businesses – I should have stayed away.

But I got involved with them. And then with the company. And then the criminal was caught and the company went to zero.

All that time wasted. A tonne of money lost.

I got a story out of it.

Every year since 2003 I’ve written a book. This year is the first year I have no desire to write a book (although the year is not over yet).

So I doubled down, and am about to quadruple down, on doing my podcast.

Is it a different business? Is it a lack of focus? No. I’m connecting the dots. I’m writing about each podcast. I’m exploring my interesting in each podcast. Often, I’m making new partners and friends and future partners with each podcast guest.

Shifting…reinventing myself…I have to do every day. It’s not one day. It’s not “This day!” It’s every day. Looking around. Reinvention is hidden in the cracks of everyday life that most people ignore.

The person who is reinventing walks into a room and says, “What is weird about this?” The people who can’t reinvent tries to control every situation in life and asks, “Why are things going wrong?”

Instead, shift and reinvent. Every day.

There’s an easy way to avoid the nine ways to fail.

Take any area of your life. Improve it 1%.

That’s the “secret” of not failing.

If you do this every day, and it compounds, then you improve 3800% a year.

You’re only competing against the person you were yesterday.

But the people who don’t do that ultimately fall into one of the nine above. If you don’t try to get healthier, you get sick as you age.

If you don’t improve your relationships, you start serving their time in the prison of this lifetime instead of serving your own time.

If you don’t improve your creativity, you end up arguing politics on Facebook and disappear into the normalcy of that life.

If you don’t improve your ability to reinvent, you get stuck in traffic in the same lane everyone else is in. There was that one path, the secret path that you could’ve taken. But you didn’t notice it.

My very first client in business was a diamond dealer. Very successful. I made his website. He was the first person to pay me to build a website. I took the money he gave me and finally moved to Manhattan. I moved to the Chelsea Hotel where I lived for many years and I met many friends and got many stories.

The diamond dealer explained everything about diamonds to me. The entire industry. The crookedness of it. But also the beauty of it.

He had a secretary. She had a giant scar on her cheek. But I thought she was beautiful.

And she seemed very kind. Maybe the scar had showed her what it was like to be less fortunate than others.

I was always too shy to talk to her. I wanted to make her laugh.

I made his website and started my first business and learned about success and failure. But would it have been so bad if I just connected the dots and licked the scar right off of her face?