Are You Born An Entrepreneur Or Can It Be Taught Later On In Life? [Comic]

Are You Born An Entrepreneur Or Can It Be Taught Later On In Life? [Comic] 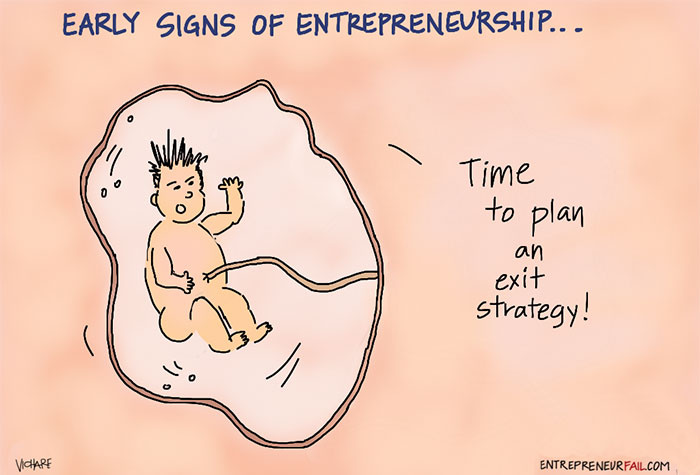 I recently volunteered as a business plan coach for high school students through the National Foundation of Teaching Entrepreneurship, and was impressed that each and every student (in a mandatory class) was excited about their potential ventures and significantly improved their skills during the session. Is it possible that every child has the potential to become an entrepreneur?

Scientists have always wondered what characteristics are innate, and what traits can be molded based on upbringing. Are there some indicators of future entrepreneurial success? Seems like the jury is out on that question. There are many successful entrepreneurs that started a proverbial lemonade stand and newspaper route, but there’s also a good share of them that launched their first venture in their ripe middle ages.  And MBA programs are teeming with students hoping to learn the nuggets that will help them endeavor into entrepreneurship.

We’ve all heard the tales of massively successful startups and their humble roots in a garage, or a dorm room. What if it has even humbler roots in a baby’s crib! Many experts claim that although some traits are inborn, others can be learned. In a recent TEDx talk, Cameron Herold talks about how to raise kids to be entrepreneurs. Perhaps some of you current entrepreneurs can relate to the stories he tells and perhaps future parents can plan their activities accordingly!   Also, let’s not forget that recently, Entrepreneurship Barbie was launched, helping girls envision a life of fashionable shoes and new ventures. It’s the age of the “kidpreneur” scream many gurus, and here’s a telling infographic to help in that goal.  All in all, the one trait that is truly a deal breaker is experience.

I think every child and adult has the potential to become an entrepreneur if he/she has the desire to test, try it, and learn from it at least once.

Were you a kidpreneur? Or at least showed the traits early on? Or did the bug come and bite you later in life? Let us know in the comments below.