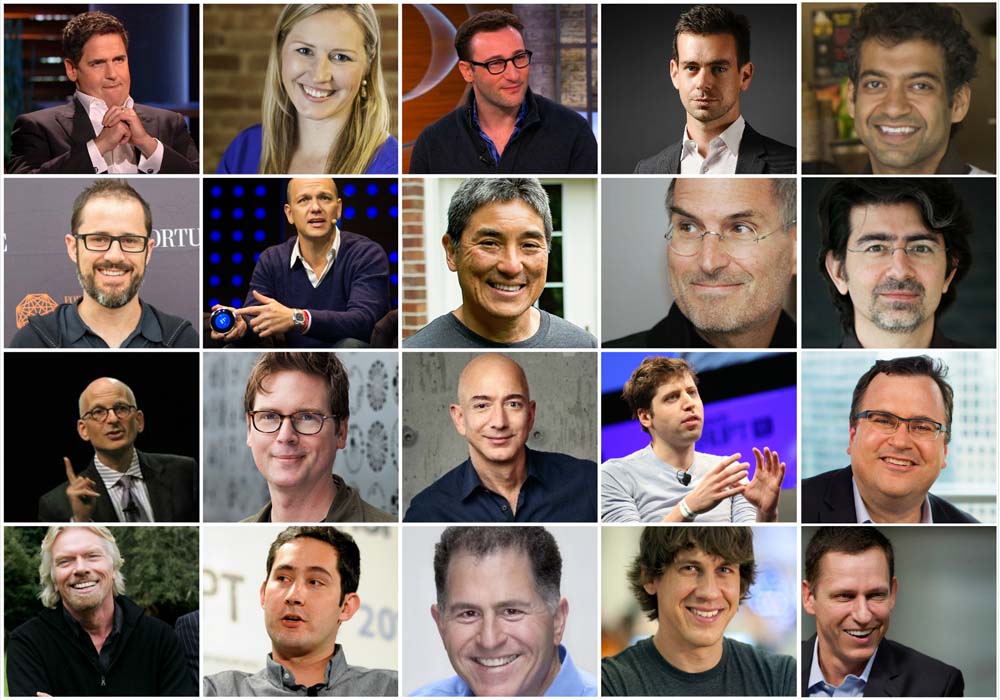 Every entrepreneurial journey marks its beginning with some inspiration. Being a startup doesn’t mean that you have to go all alone. Those who have already made big will always share their success drive, to guide, mentor, and motivate you.

Here are 50 priceless advices from such great entrepreneurs.

Do something you are really passionate about and don’t try to chase what is a kind of ‘hot passion’ of the day.

Be passionate for what you are doing because it’s so hard that any rational person would give up.

Just go and do it; Try and fail. If you fail, that will be a learning experience so that you can take that on to the next experience. Don’t let people who you may respect and who believe what you are talking about, tell you it can’t be done.

People who will look at great ideas to make money are as successful as those who like to say ‘what I love to do’, what I am excited about’

Its very rewarding when you have got something that you know will gonna make big difference. And yes, it’s a little bit harder, but I think that passion one might can bring with it, brings so much more energy to make it more likely to succeed.

If you know exactly what you want to be, you have to spend as much time with people that are actually already there.

One of the things that I do is I question lot of things. If you try to get people motivated about why you are doing, the worst thing you can end up is a situation where they will tell you that this is the way it has always been there. Instead ask yourself, ‘Given everything we have today, is there a way to make it better..’

When it comes to new ideas, We always ask ourselves, what kind of new market will get created, what problems it will solve, so I have got as far as taking the entire catalogue of my day from the moment I open  my eyes, and write down every single thing that I do and asking myself like,’Is there something here.

If I am not coming up with 10 ideas every single day, then my idea muscle atrophies. The good news is, after about 6 months of doing that, you are like a machine. People will be surprised on as to how many ideas you can bring to  a place.

Naturally, nobody is interested in your idea. You have to pursue them and you have to show that you are the one person out there that can do it.

If you believe enough, than other people would see it. You need to foster the belief in what you are doing, so that it becomes a reality which is very different than saying, “I don’t expect anyone to believe it, until I see it.” You need people to believe it before they see it.

Don’t necessarily think that you have to make the home run and build apple computer at your first start. Fun is one of the key things. Build things first for yourself that you would want to have in your life.

Put yourself into a business that really doesn’t have limits. There is always going to be a ground to it, but if the business kept you visualise something that every business is doing or every consumer is using, it is going to be tough to scale to be big enough.

You want an idea for which you can say- it sounds like a bad idea but here is specifically why it’s a great idea.

When you want to differentiate, there is going to be that gut moment, a gut sense about what is right and what is not right. If you are not having doubts, that means you are not pushing the boundaries far enough.

Simon Sinek, Start With Why

Every single organisation in this planet knows what they do 100 percent. Some know how they do it, but very few organisations and people know why they do it and by why I don’t mean profit but the purpose, the cause to believe , the reason for your existence.

When we see a kid with a lemonade, it’s entirely different from a vending machine with lemonade. Even if the two products are same, it’s the story around it that attracts and resides with the people. Once you have heard a story, it will be remembered your whole life. ”So when I meet small business people, I don’t ask them about their balance sheets, but their story.”

I have to won if I have to exist in this world. “If this was successful and I was not involved, I got no money, would i still want it to do well,” That’s a great check, to know if you really feel good about the idea.

One of the things I advise entrepreneurs to is when you have an idea, go and talk about it. A classic entrepreneurial impulse is to hold the idea close to u as it is so special. But it’s a mistake. Because your actual competitive edge is not that you have this idea but it will come if you are assembling the intelligence around: does this idea work, what is the right team, what are the right learnings.

The hardest thing to do is start. Anyone can have an idea but it’s really about executing the idea, building the idea and attracting other people to help you work on that idea.

You don’t have to be the best but to be dangerous. You have to learn just enough to be dangerous to build an idea, concept it and show it to the world. You need to find people who are drawn towards your idea and they end up taking it and making it even better.

One way to conceptualise and make a good product is maximising the probability that someone shows up at the front door with the solved problem.

Often times the best methodology is to start with the perfect experience that one person gets right and scale it to something great.

When you are starting a new business, you don’t have to go to giant market, you need to go to small market, and you wanna take over those markets quickly.

Constantly see criticism. A good critique what you are doing is as valuable as gold. And you should seek that from everyone you can but particularly, your friends.

If you are not utilising an online community, than you are at disadvantage from those who are. You can be asking online communities for advice on anything you are working on. Not only will you hear from people passionate about the subject, but you will be hearing from people all around the world, each with their stories and experiences that can help you.

There are a lot of people from whom we can learn a  lot. Don’t underestimate any advise that you ever come across.

Most startups fail because they did not make something people wanted. They made something they thought people would want. But they were either in denial about it, or somebody’s else came along making people want that more.

If you listen to all negative feedbacks always, you will never built a thing, you will never have prototypes for anything. When you built stuff that you like to use, thousands of other people will also wanted to use it too.

It’s not about double checking your vision, it really is about integrating this concept of testing your idea rigorously throughout the project development process, or the marketing process, even as you scale up.

Think about the smallest possible test that you can run for this idea, for this concept, for this theory, get it out there and get customers using it. Because your customers are going to be the one to tell you, if it’s really working or not.

There should be some expectation that you should have in your mind, like sort of I will change the world, that kind of ambition right. But its actually ok early on to kind of solve small problems in life.

I think, you should be spending your money on teaching and sharing. Start talking to people. But you can’t talk about yourself all the time, people won’t come back to you. You have to talk about points relevant to your industry, ideas you have, in search of the audience.

You must realise that you can’t do everything and even if you can, you shouldn’t.

You should find a great partner, no matter what it is you are doing. And you should look for someone who has intelligence, very high energy, very high integrity. You need all three of those, you can’t compromise with any one of them.

When you are working with people it’s important that you line up what your goals are.

Come up with committable core values, meaning you must be willing to hire or fire people on the basis of those values, completely independent of their actual job performance.

A company is simply a group of people, and as leader of people you have to be a great listener, a great motivator, and you have to be good at praising and looking best in people

My job is basically to be an assistant to rest of the company. My job is to make sure that you have what you need and if you don’t have that, then let me know because than I am not doing my job.

You have to face a  lot of things that are outside your control, there a lot of external circumstances that will determine the success of our idea, for example, whether the market timings are right for this kind of idea, whether you will meet the right persons who will finance your company. But you have to be like OK with that.

You need to be open for changes, be flexible and open-minded.

So many things go wrong, when you are starting a company and often people ask, what mistakes should we avoid making. And my answer to that question is don’t even bother to avoid mistakes because you will gonna make tonnes of mistakes. The important thing is actually learning quickly from whatever mistakes you make and not giving up.

Courage means to not to give up at times of adversity. One can learn to be courageous, but not to be genius. So if you are already a genius, you must learn to have courage if you are extremely determined to succeed.

Most importantly, you have to spend a lot of time doing hard work.

Optimism has a place but, as a first time entrepreneur, you need to be pragmatically pessimistic. You need to define all worst case scenarios, in terms of financial loss, time loss, etc., look at what you learn if that happens and to come to terms with that if it ever happens.

If you don’t love it, you won’t make it through the long period of pain that is inevitable.