Why Singapore Is A Promising Market For Indian Startups

Purchasing power is 12.3 times higher in Singapore compared to India

Singapore is the most digital-ready country, according to Cisco’s Annual Digital Readiness Index

Singapore has 88% internet penetration; its software engineers are 4.8 times more expensive than India’s

Previously in DataLabs article of Indian Startups Chasing Expansion Dreams With SouthEast Asia On Target, we saw a trend where the Indian startups, in the process of their expansion strategy are choosing Southeast Asia as their next destination to land and Singapore emerges as the most favoured destination for Indian startups.

With 9 per cent of Indian population living in Singapore, a country which has Tamil as one of its official languages, the presence of the Indian startups in such a destination is obvious.

According to an analysis by Datalabs by Inc42, Singapore is hailed as the most attractive Southeast Asian market to expand operations for Indian startups. Out of the total companies studied, 34.29 per cent already have a presence in Singapore, the analysis points out. 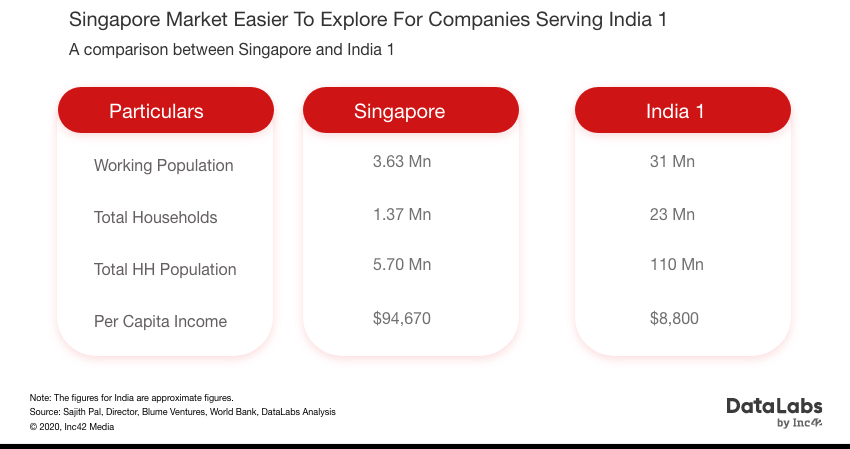 As many have said over the years, there are many different versions of India, writes Sajith Pai, director, Blume Ventures. Singapore can be compared to “India 1” comprising the upwardly mobile urban population of tech adopters. This India, according to Pai, has a working population of approximately. 31 million. The similarities in the buying behaviour of consumers in the two markets make it easier for companies already serving India 1 to serve Singapore as well, he opines.

India and Singapore have for long made efforts to strengthen their bond. In 2018, the two countries inked many memorandums of understanding (MoU) and agreed upon initiatives during Indian Prime Minister Narendra Modi’s visit Singapore. Science, technology, innovation, startups and fintech emerged as the new spheres of bilateral engagement between the two, opening new ways for India’s startups to explore the Singapore market. 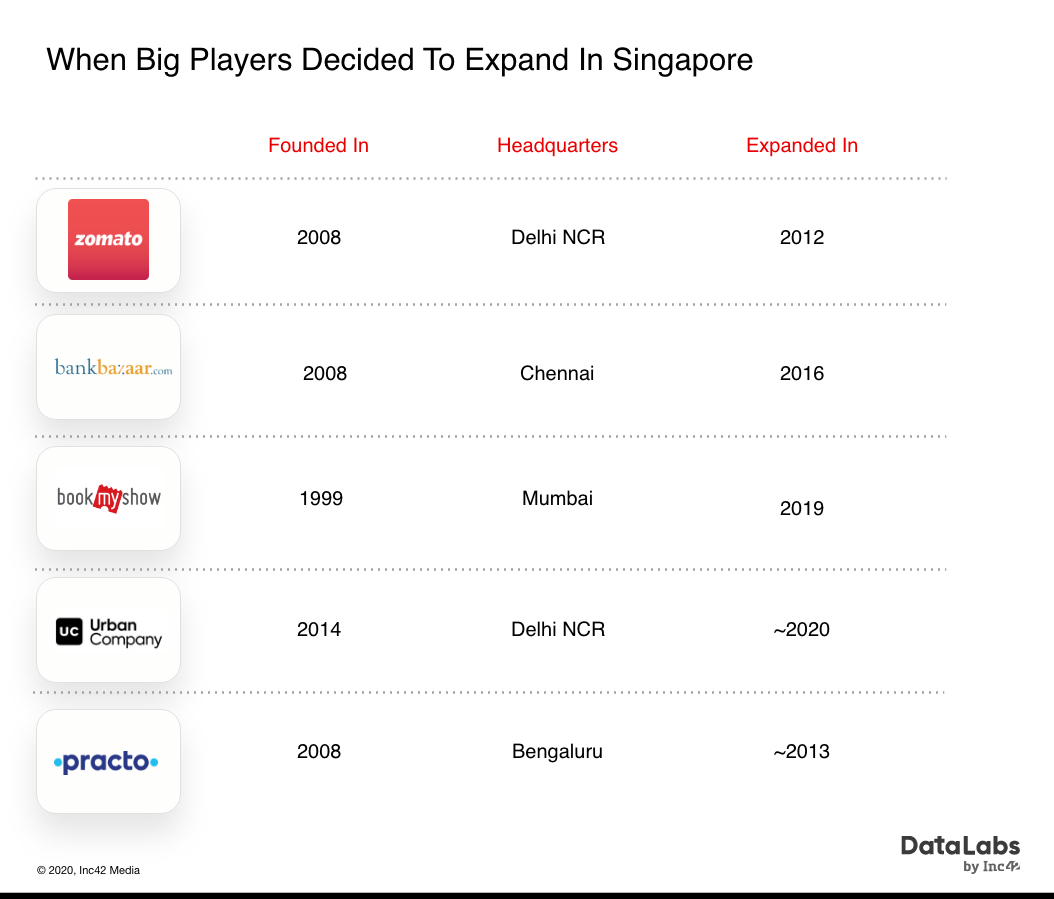 Singapore is the core nervous system for startups in Southeast Asia, with an enormously business-friendly environment and easy access to venture capital.

Dr Mohanakrishnan, managing director of StepUp Education and Consulting, Singapore, says: “Singapore regulatory procedures were smooth when we set up StepUp. We could set up the company in exactly two days including completing bank account formalities. And there are agencies well versed and professional in helping us register companies, with prefixed advisory charges.”

As Singapore’s digital economy and startup ecosystem converge to fuel economic growth, Indian startups are increasingly attracted to the region for factors such as developed infrastructure, political stability, open business policies, skilled workforce, large market,business-friendly environment, high purchasing power, and the use of English as the main working language.

The purchasing power in Singapore is 12.3 times compared to India’s, and the percentage of the population in the age bracket of 15-64 years is 76 per cent compared to 67 per cent in India, which leaves Indian startups with a good opportunity to do business there.

Singapore, an island nation located in the heart of Asia, has a thriving market in terms of robust economy, well-educated workforce, excellent infrastructure and a high standard of living which gives Indian startups an ideal environment to invest with confidence. 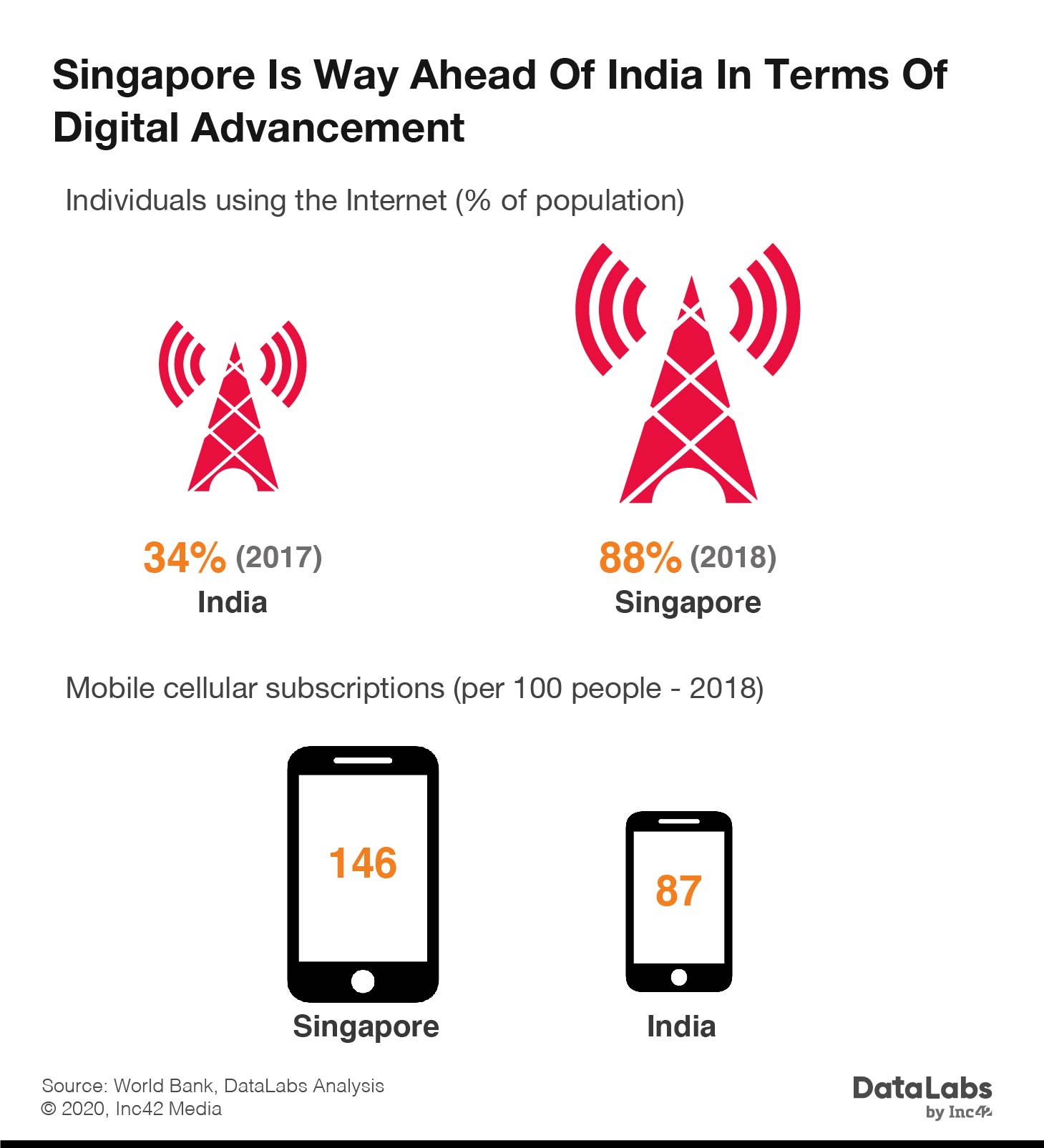 With an internet penetration of 88 per cent, Singapore provides a good opportunity for Indian tech startups to expand their foreign footprint.

Start up with ease:

In Singapore, the process to register a company only takes one day. Also, the incorporation of an online system has made the entire procedure easy and quick, enabling entrepreneurs to submit applications online. 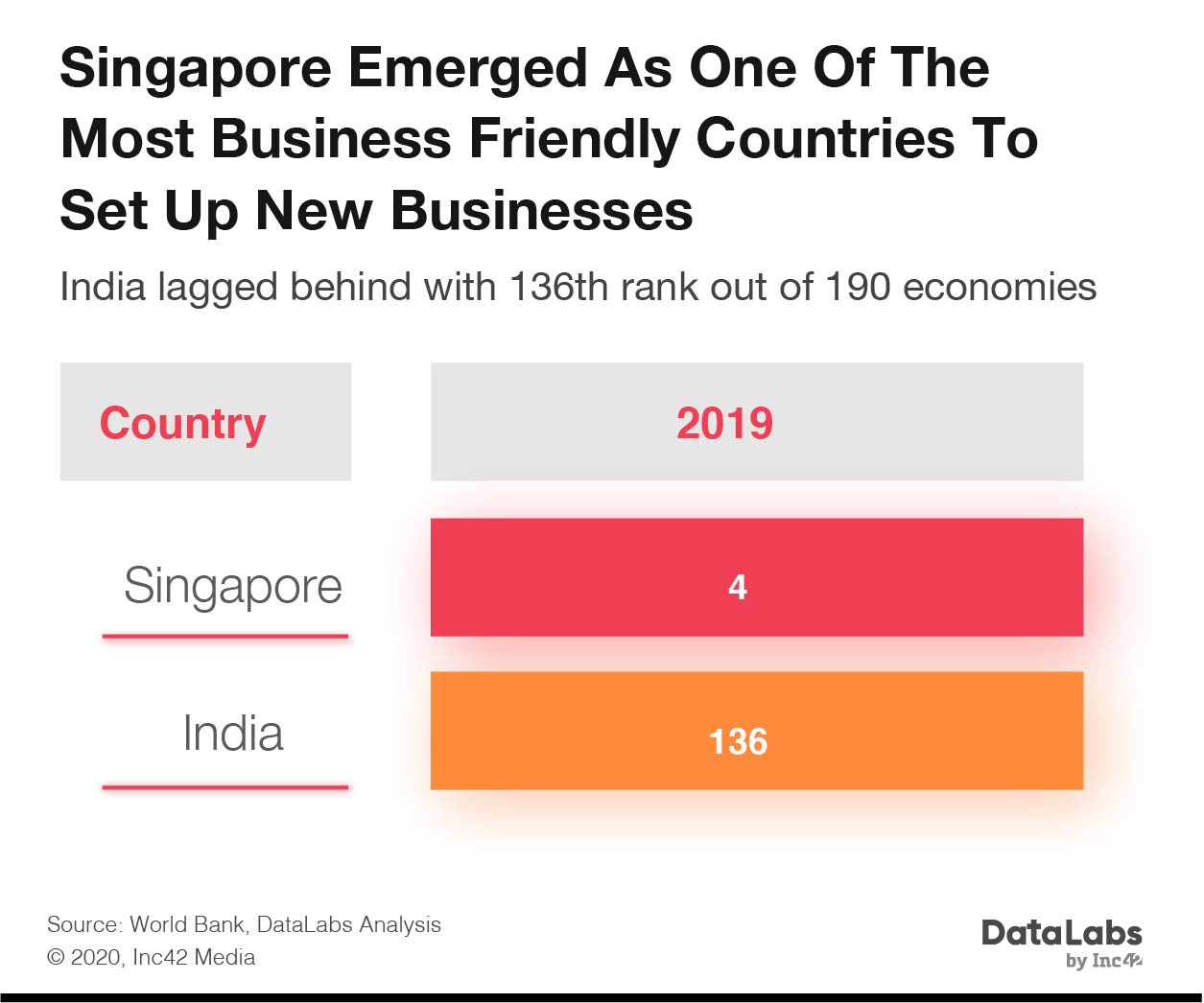 A long list of accolades and international rankings such as the World Bank’s Doing Business Report, and the World Economic Forum (WEF)’s Global Competitiveness Report are a testament to Singapore’s business environment, its capabilities as well as infrastructure.

Singapore’s political environment – one of the most stable in all of Asia – offers a strong sense of security and comfort among foreign entrepreneurs. Singapore’s, the country’s judicial system has been recognised as one of the most efficient in Asia, and the country also has a persistently low crime rate through strict law enforcement and anti-corruption laws. 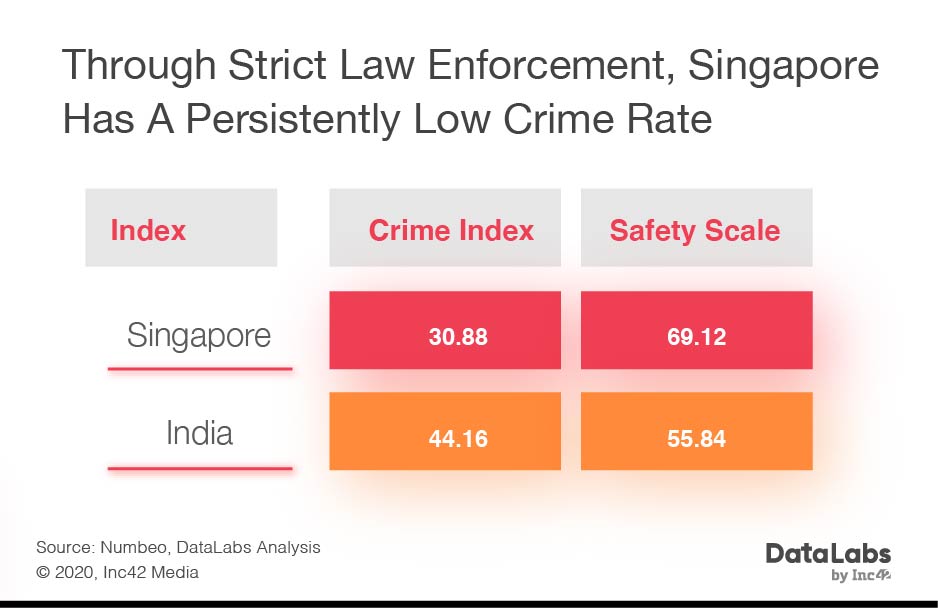 There is nothing more important to tech companies than the protection of their intellectual property. Singapore has robust IP protection laws in place, and is in fact known for the strongest IP protection system in Asia.

As a hub for wealth management and investments in Asia, Singapore has a vibrant financial centre with affordable access to funding.

Thinking of setting up headquarters?

The Economic Development Board (EDB) offers incentives for multinational companies for setting up regional and international headquarters, encouraging them to relocate their bases to Singapore. Companies holding a headquarter status in Singapore enjoy a concessional tax rate. 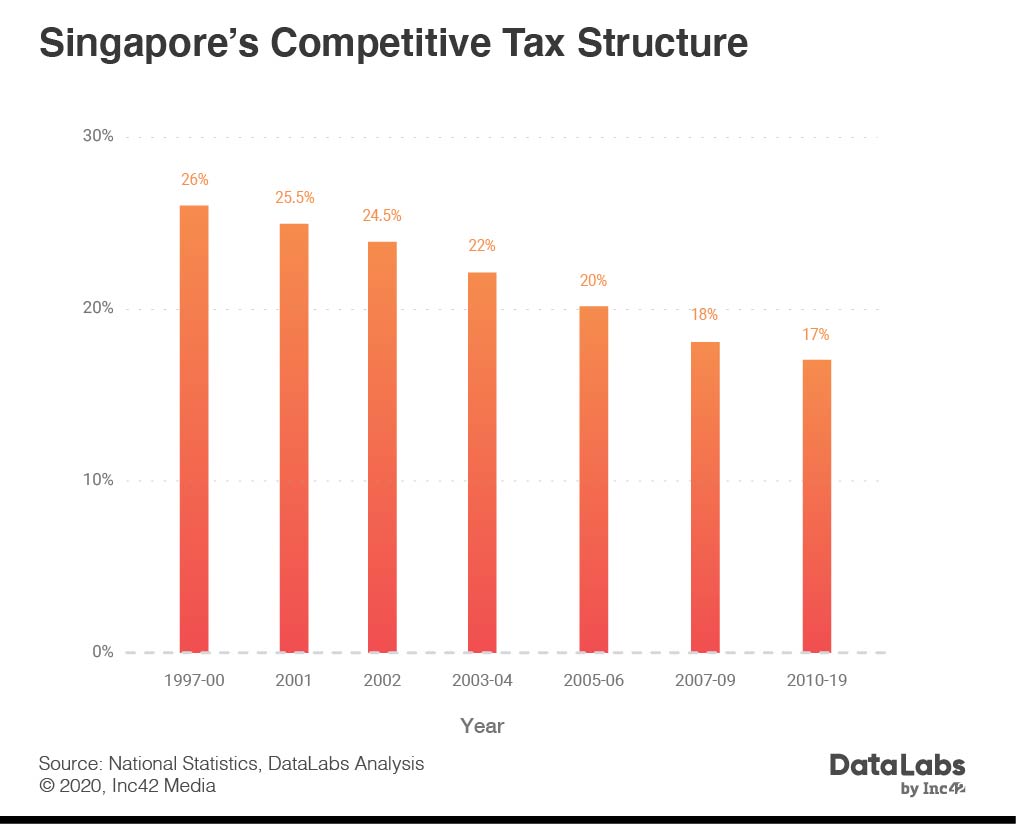 Singapore still provides one of the most competitive corporate tax structures in the world, in addition to its extensive network of free trade and tax treaties.

Talent as a true competitive advantage

Singapore has the right, technologically sound and English-speaking talent base for Indian startups. Singapore scores a 0.88 (on a scale of 0 to 1) in the World Bank’s Human Capital Index. Asia has the widest range of English proficiency levels, and Singapore leads the pack with a score of 66.82 in the Education First’s English Proficiency Index (EPI). 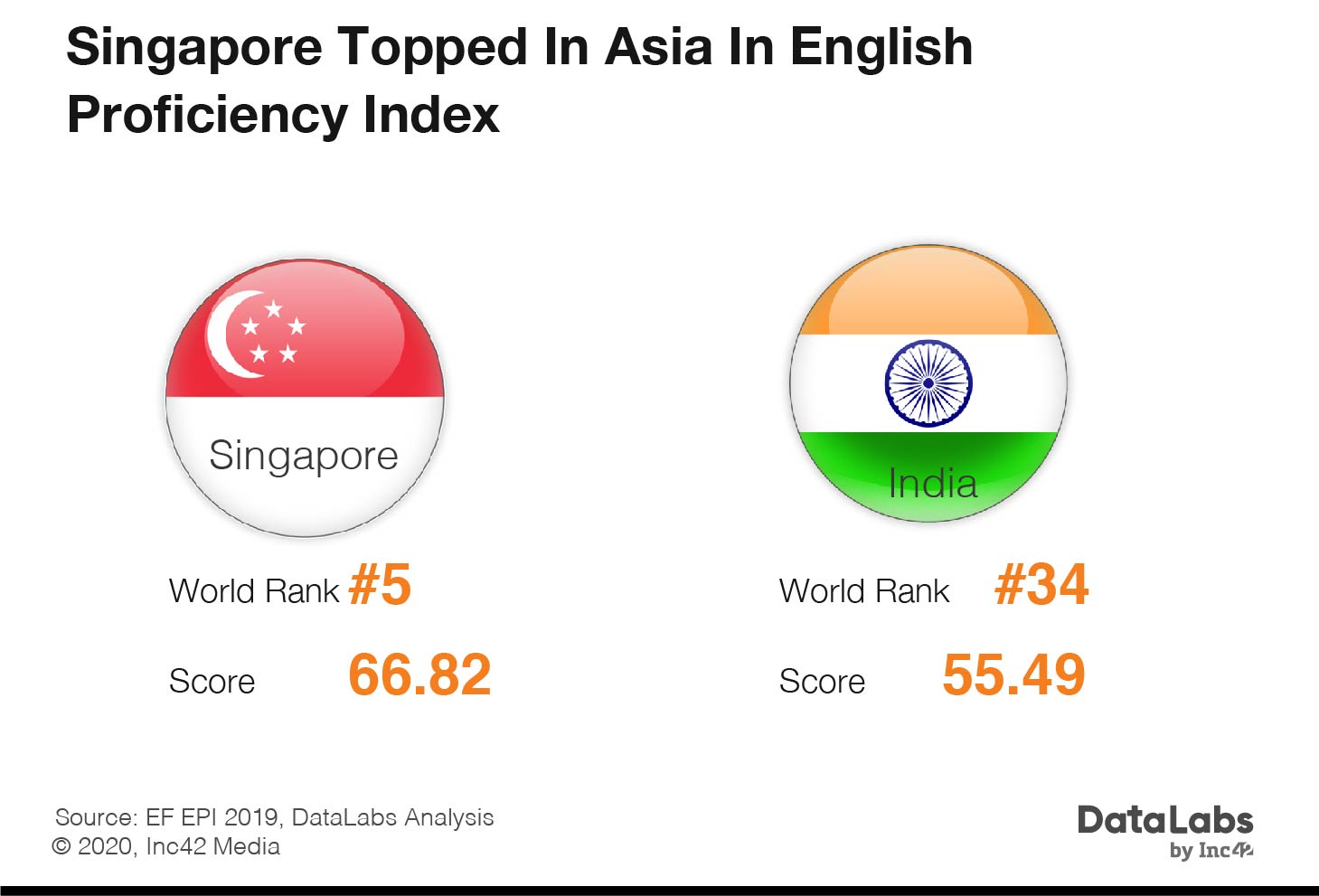 Singapore plays a key role as a business epicentre in the heart of Asia.

Singapore has been rightly acknowledged as a global business hub, with its unique position in the global economy, powered by digital advancement, high purchasing power, favourable government policies and highly-skilled workforce. Still, whether in terms of moving headquarters or expanding international footprint, Singapore still offers too many advantages for Indian startups to ignore.