Only 9% of startups funded in 2019 had women founders

Is gender equality a distant dream for the Indian economy?

The fight for equal representation for women in various aspects of the Indian economy is fought on many fronts. But given the current state of the economy and the big focus of the hour, there is definitely a need to address healthcare inequality first.

When it comes to access to quality healthcare for women, the turf is highly skewed in the favour of urban citizens. The life expectancy at birth for women in rural regions is 68.9 years (2012-16, the latest figures available in this regard) compared to 73.5 years in urban areas — that’s a big gap for this particular indicator. Apart from such macro indicators, the accessibility of basic sanitation and personal hygiene products in non-urban regions also remains in question.

Although numerous startups are focussed on improving female livelihood using technology (femtech), their impact only remains limited to the urban audience. But 69% (or 406 Mn out of 587 Mn) women in India live in the rural regions, as per census 2011. The lack of tech adoption and high expansion cost remains a major issue for femtech startups looking to expand beyond urban boundaries. Taking these business considerations into account, the government needs to facilitate wider public-private partnerships to enable the value creation for femtech startups in non-urban areas of India.

A major drawback in the Indian context is that women healthcare and rights issues have long been considered to be taboo subjects for public debate and discussions. This resistance has a negative impact on the overall state of women healthcare in India. For instance, in the context of menstrual hygiene, nearly 88% of the women in India still use unsanitized cloth, sawdust and other materials, instead of sanitary napkins. In order to boost female participation in the mainstream economy, the first milestone which needs to be accomplished is providing egalitarian healthcare access across the country.

Women In Indian Workforce And What’s Holding Them Back 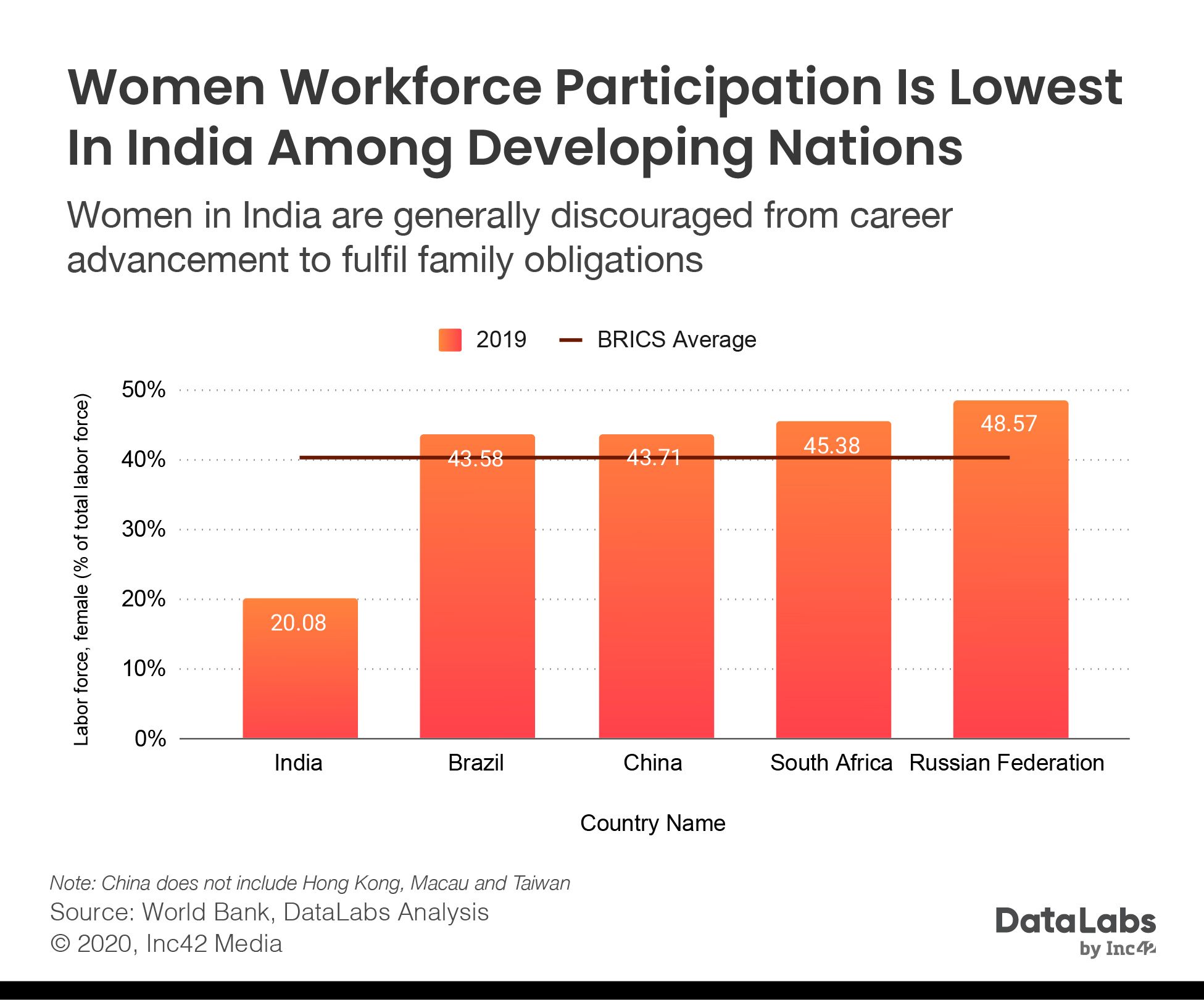 In the past, the primary reason for women not being able to work in offices and for the government was societal and domestic pressure. Over the years with the rise of modernisation and urbanisation in the country has relatively evolved from its past menace. The Economic Survey 2020 highlighted multiple reasons why women in India do not participate in the formal workforce some of them included— an extended period of education, marriage, religion, caste and others. But what it failed to consider is the fact that inadequate healthcare is also a primary reason behind women dropping out or not being able to participate in the formal workforce. 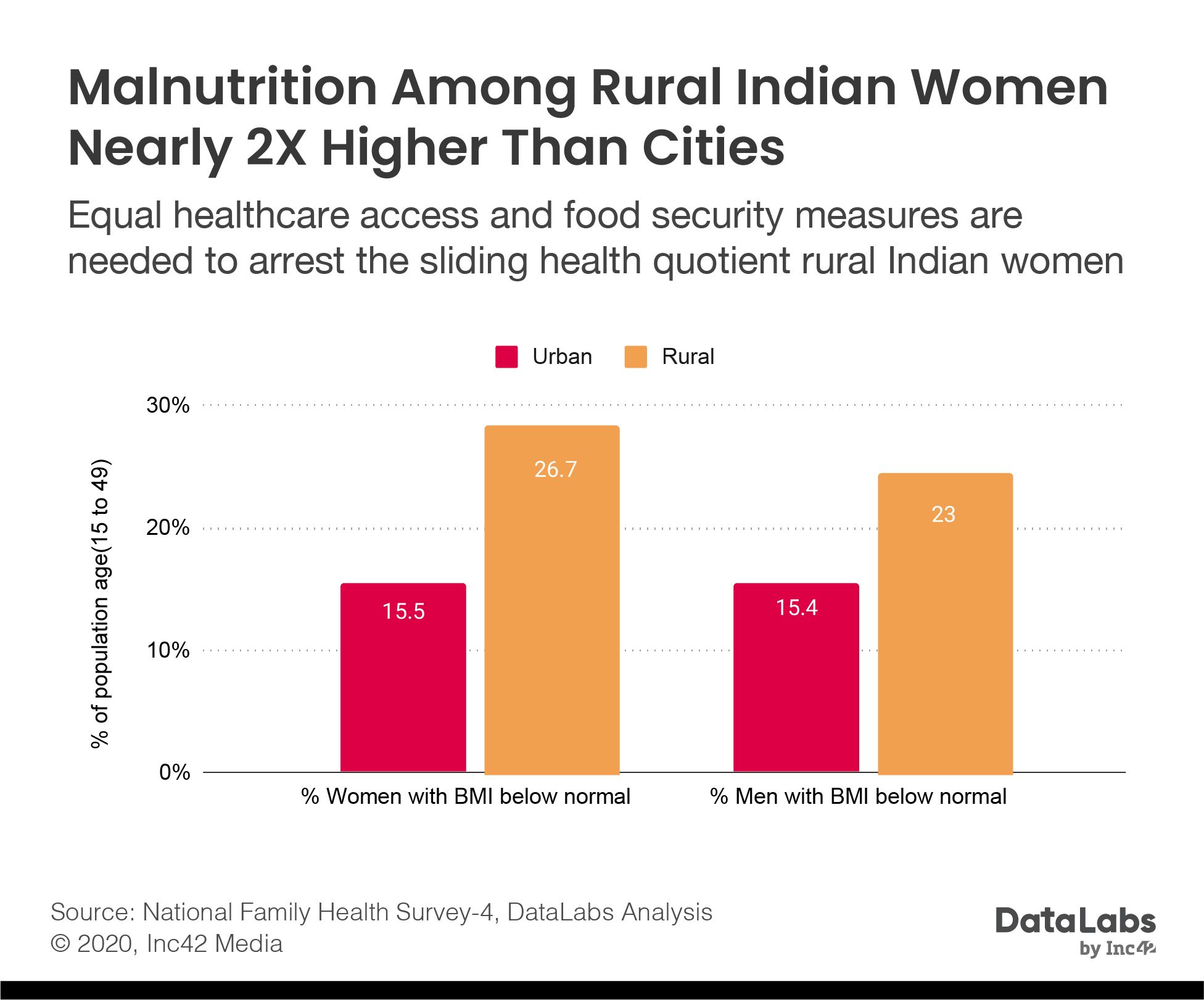 As per the fourth National Family Health Survey (NFHS) conducted in 2015-16, 26.7% of the rural women in India recorded a body-mass index (BMI) under 18.5 Kg per sq m which as per the World Health Organisation is classified as malnourished. A healthy body and a sound mind are the minimum requirements to stay committed to formal employment or education, and with such disparity in nutrition, the development indices for rural women have trailed urban women for decades. In addition to this gender-based discrimination in the context of access to healthcare, a joint study conducted by researchers at the All India Institute of Medical Sciences (AIIMS), the Indian Statistical Institute, Prime Minister’s Economic Advisory Council, and Harvard University stated that out of 23,77,028 out-patients who visited the AIIMS medical facility from January to December 2016, only 37% of women got access to healthcare facilities, as compared to 67% of men.

Anne MK Reijns, commercial director, for Avegen, which runs the women-focussed healthcare-at-home organisation Together for Her, highlighted that approximately 50% of women in rural India are anaemic, and have severe energy deficiency. This causes such women to skip work in the morning, be less productive than their male counterparts or drop out of the workforce completely because they cannot fulfil their duties at home along with their duties in the office or at work.

In order to encourage women living in rural regions to take up quality education which can later pave the way for their employment in the formal sector, the government needs to bring advancement in women healthcare and bridge the urban-rural divide in access to medicine and treatment.

On the other hand, in urban regions where the facilities are relatively better in terms of both healthcare and education, the wage gap between men and women acts as a major bottleneck for advancing women participation at work. The Periodic Labour Force Survey (PLFS) 2017-18 highlighted that in Q1-2018 the average monthly gross earnings for men and women was INR 15,958 and INR 6,453 respectively. Indicating men earn approximately 2.4 higher than women. 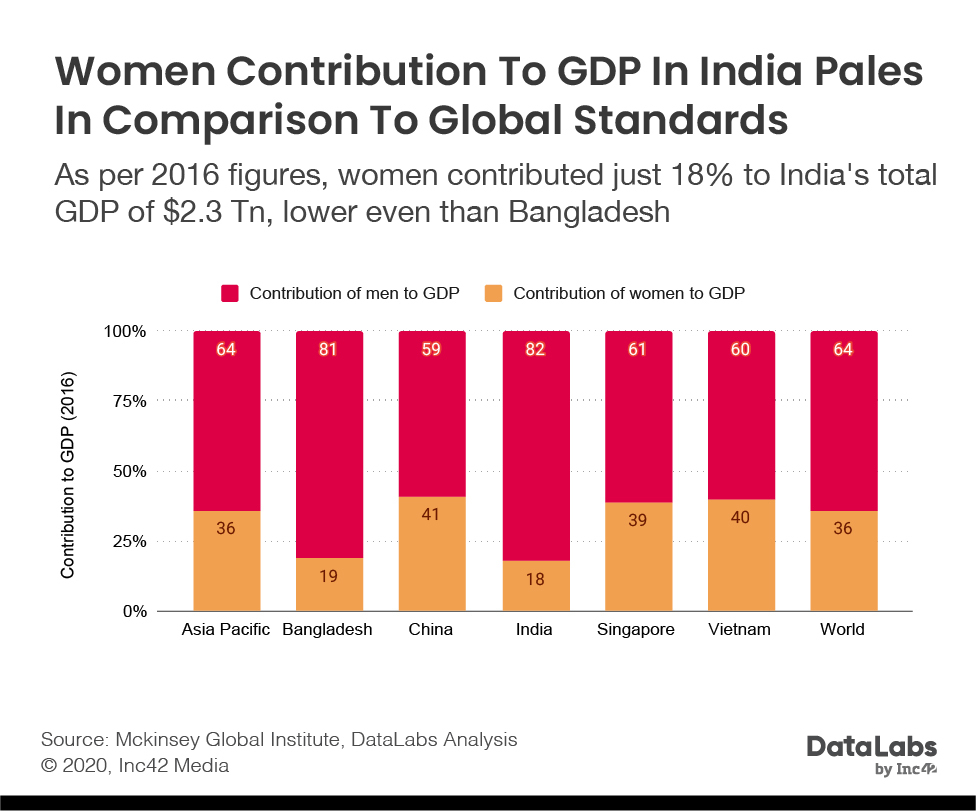 According to a Mckinsey Global Institute study, India could get a boost of $770 Bn to its annual GDP which is one of the highest in the world, if labour force participation of women is increased to 35%. So India has to achieve a 15 percentage points growth, which seems unachievable in the short term. So while the overall economy will definitely be boosted by addressing women inequality at work, it cannot happen with one or two reforms. It does need some systemic changes, which might take years or even decades. 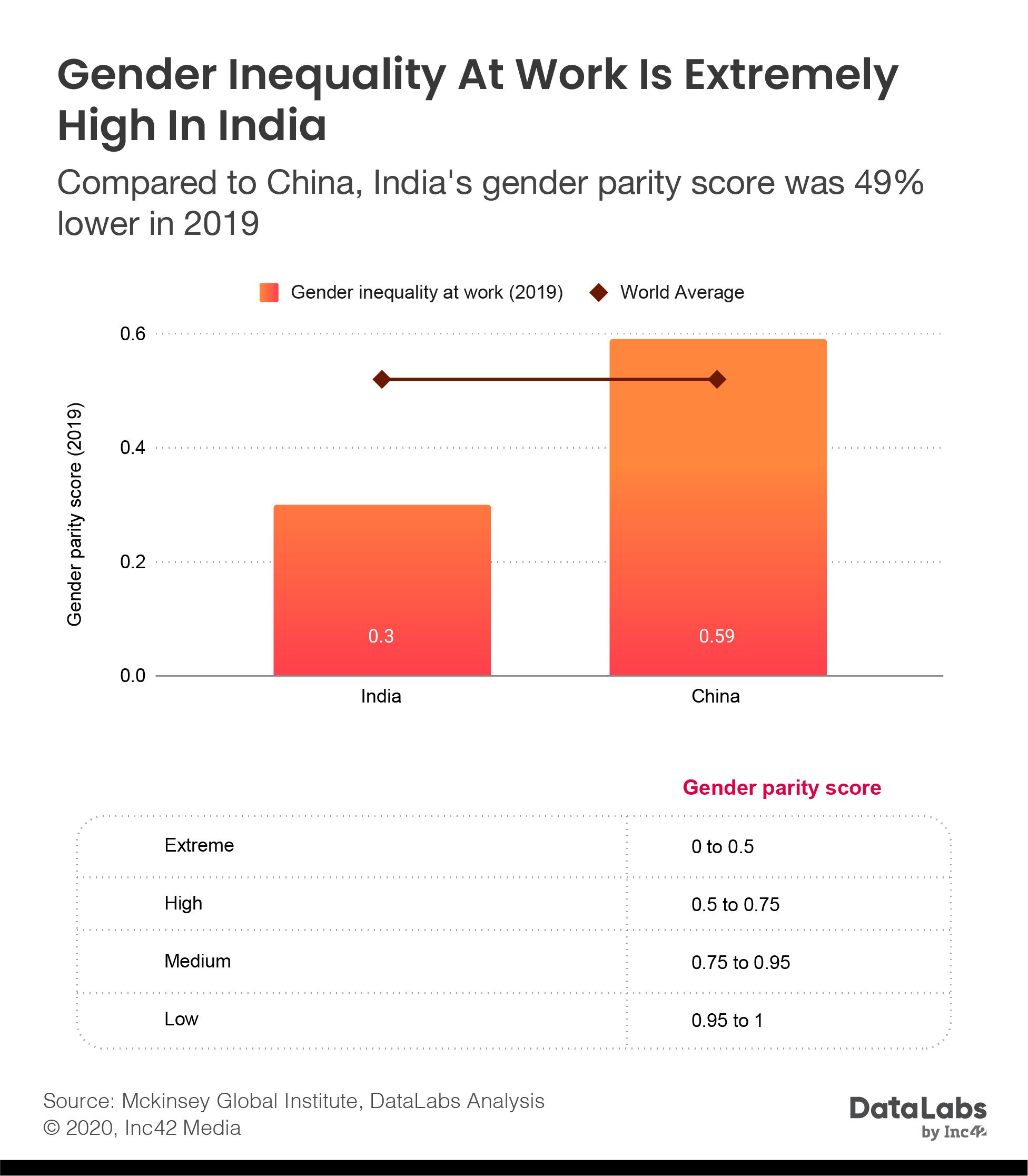 What Role Can Indian Startups Play To Bridge The Gap?

Despite efforts by numerous central government administrations to address gender disparity at work, it’s far from being solved even in the more affluent urban regions.

Rather than reforms that often take decades to be implemented and seeded, what’s needed is an out-of-the-box approach, proactive enabling of public-private partnerships, technology-driven measures to improve readiness and awareness among women. All these will start to catalyse women participation in the formal employment sector.

Indian startups have contributed in a plethora of ways towards socio-economic development ranging from increasing tech literacy through vernacular content platforms to rejuvenating traditional industries through ecommerce as well as improving financial literacy to a certain degree. A collaborative approach can really work wonders in bridging the gender gap in healthcare and employment.

The role of startups can include expanding the reach of public healthcare in the rural region where 69% of the Indian women reside, through specific telemedicine products and establishing skill development centres to equip women in remote areas with adequate skills for formal employment such as training in computer skills, language and soft skills training and more. Finally, establishing more women-centric discussion platforms (SHEROES being one example) in rural areas will encourage dialogue and discourse on pressing issues and discourage censorship in public debate. This is just as crucial as bringing services to women in rural areas and will go a long way towards solving the gender disparity at the workplace.

Together For Her works towards advancing primary healthcare services to individuals and focuses primarily on improving pre and post-natal healthcare. It has taken a collaborative approach to advance pregnancy care in urban and rural areas in India by building an integrated platform which covers the entire patient journey from virtual hand-holding of the mother-to-be using a mobile app to educating them on the dos and don’ts during the pregnancy in multiple regional languages, to assisting routine doctor appointments at partner hospitals.

Skill development startups can also play a crucial role in not only improving employment but also adding to employment in the healthcare industry in rural areas, which will address both issues simultaneously. Indian startups can play a wider role in making inequality at work a thing of the past, but given the scale and complexity of the issue, only public-private partnerships can create the big impact needed in a short time-frame.