Why Indian Startups Are Flocking To Southeast Asia

Indonesia, on the other hand, offers extremely attractive opportunities for edtech startups

This article is a part of DataLabs by Inc42’s Southeast Asia (SEA) series which offers a detailed analysis of Southeast Asia’s advantages, policies and macroeconomic factors that influence Indian startups to expand their operations there. Read all articles in this series

With a range of factors such as high population, English-speaking demography, high digital and internet penetrations, and opportunities to expand into East Asia and other markets, these four countries offer a unique opportunity for Indian startups looking to expand overseas.

India’s relationship with Southeast Asia intensified after the announcement of Look East Policy (LEP) in the early 1990s. Since then, India and Southeast Asian nations have been continuously improving ties and announcing many trade and strategic partnerships. The LEP got upgraded to the ‘Act East’ strategy by the current Narendra Modi-led government for deepening and broadening engagement with the region.

So what exactly makes Southeast Asia such a favourable destination for expansion, and which countries offer the best market conditions — sector-specific and sector-agnostic — for startups from India. When compared on the basis of five key variables for startup growth — population, internet penetration, English proficiency index, purchasing power and per-capita GDP growth rate — India lags behind in most parameters except population and per-capita GDP growth, while the most favourable destinations in Southeast Asia offer better opportunities to startups in other regards. 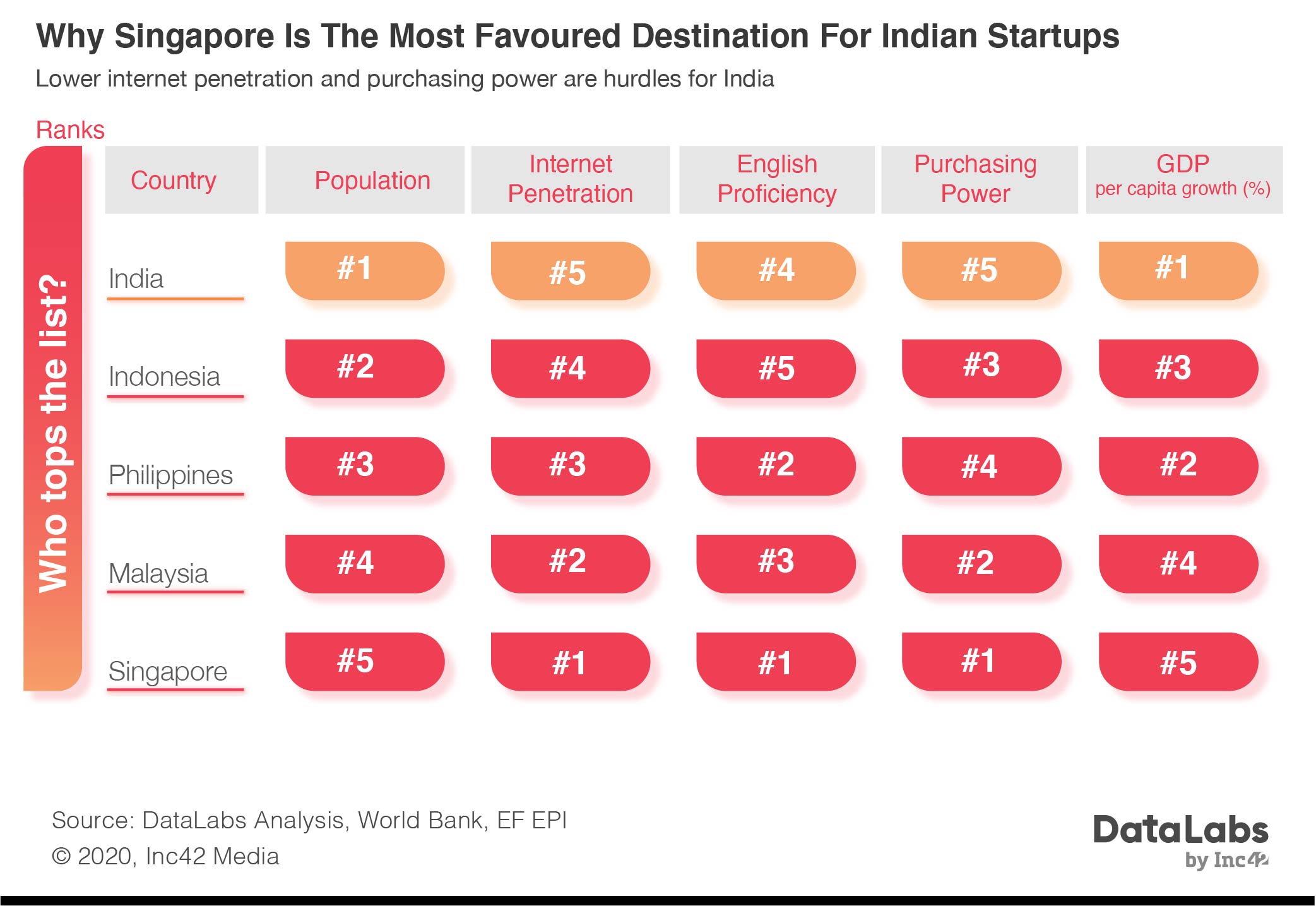 As expected, Singapore emerges as the most favourable country in terms of the high adoption rate of internet and very high purchasing power. So tech companies can easily explore the Singapore market for their international expansion efforts.

With its ultra-low population, Singapore offers a more mature market for startups, whereas the likes of Indonesia, Malaysia and the Philippines offer the bigger opportunity in terms of untapped audiences.

Said to be the primary destination for startups in Southeast Asia, Singapore offers an extremely friendly and accessible business environment and easy access to venture capital. The country’s strong economic growth attracts and supports a diverse range of startups across sectors.

Being an international business hub, the connectivity to and from Singapore to various countries is an unquestionable advantage. The country is in a 7-hour flight radius to half of the world’s population, which helps in providing strong market access to businesses as well as investors.

Thanks to its vibrant startup ecosystem, forward-looking banking and fintech policies, several centres of excellence, high density of company HQs and research centres, Singapore offers the best partnership opportunities for new businesses and startups from other markets.

With purchasing power currently at $94,670 and growing at 3.2% CAGR (2014-18), consumers in Singapore have also shown great potential for technology products and services. As per the Singapore Economic Development Board, the country will account for more than half of the world’s middle-class population and form the bulk of demand for consumer goods by 2030.

Among these, the two elements that have primarily contributed to the favourable position of Singapore for Indian startups are the talent pool and the innovation-friendly policies.

Singapore, with a 97.3% literacy rate in 2018, has the right talent for Indian startups to help them grow beyond borders. With 97.3% literacy rate in 2018. It has proved its high-quality talent by ranking 3rd for Global Talent Competitiveness Index, by INSEAD and ranking 1st in start-up talent, as ranked by Genome’s 2017 edition of its Global Start-up Ecosystem Report. As lucrative as the talent looks outwards, software engineers in Singapore are 4.8 times more expensive than in India.

The Singapore government is also putting ample effort into supporting new businesses and innovations. In the process of encouraging its already famous fintech landscape, the MAS (Monetary Authority of Singapore) has set aside $165 million to develop the sector over the next five years. 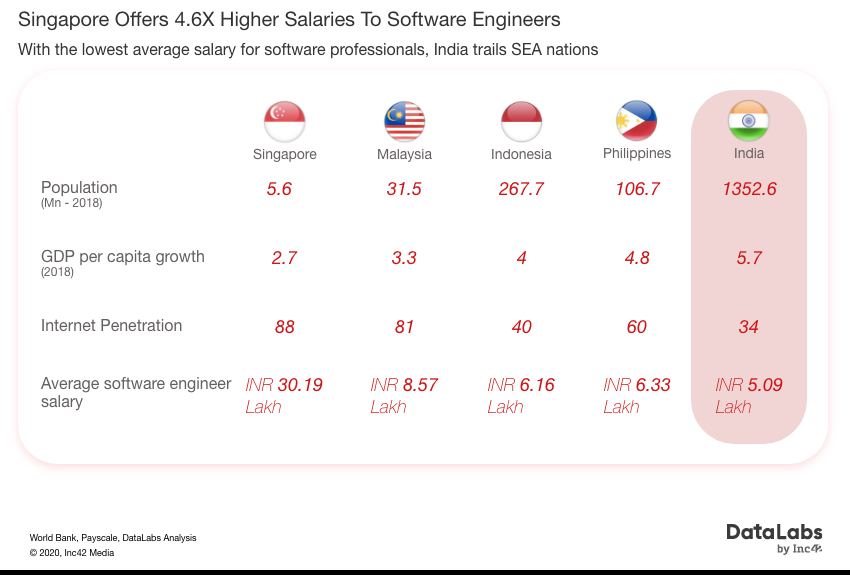 Constantly overcoming several obstacles, bureaucratic problems and lack of infrastructure, Indonesia has progressively transformed into a startup nation today. The world’s fourth most-populous country with 267 million people is all about business now, having got over the economic slowdown of the late 90s and early 2000s.

Currently, the country is experiencing a major revolution in terms of technology, which makes it an excellent destination for Indian startups to expand.

Over the past 5 years (2014-2018), Indonesia has been experiencing rapid growth in terms of GDP per capita growing at an average of 3.8% every year. The internet economy in the country is expected to rise above US$100 Bn by 2025 as per e-Conomy SEA report 2019.

There is a huge opportunity for Indian fintech startups to expand in Indonesia due to the large unbanked population in the country and a strong demand for financial services to bring in the digital transformation as is seen in the rise of GoJek, Ruangguru, Traveloka, Tokopedia among others.

Indonesia is also known for its massive tech-savvy population even among the less affluent classes. In a recent development, the proposed job creation bill by the government said that an employer categorised as a “startup” can hire foreign workers without the approval of the central government which means quality talent from around the world is readily available in the Indonesian market, which is a big hurdle for Indian startups, particularly those in deeptech sectors.

Just like fintech, there is high scope for blockchain startups which is another big thing in Jakarta, capital of Indonesia. Started in the year 2018, South Jakarta has a Blockchain Hub that serves as a global platform for networking for innovative blockchain businesses and industries.

With per-capita income of $12,670 — 64% higher than India — Indonesia offers an excellent opportunity for Indian startups looking to expand overseas. Edtech platforms are likely to find traction readily in the Indonesian market, as it is only behind China and India when it comes to consumer spending on online learning in Asia.

In addition, ecommerce, travel tech, manufacturing and real estate sectors are the most promising sectors for Indian startups in terms of market opportunity and domestic spending.

The Philippines In Focus

One of the rising internet economies of Asia, Philippines has grown on the back of effective governance, rising digital and internet infrastructure and policy efforts in the right direction.

As per analysis presented in the e-Conomy SEA 2019 report, the Philippines has the smallest internet economy in Asia, but also shows the biggest capacity for growth in terms of untapped audiences. The digital economy of the country is projected to grow by a whopping 357.14% from $7 Bn in 2019 to $25 Bn by 2025 as per the report.

The country is becoming a fintech, blockchain, and cryptocurrency hub with boosted investments in these sectors by financial companies. But content and social media platforms are also making great inroads into the market.

A report from Hootsuite and We are Social says that Filipinos spend an average of 10:02 hours a day on the internet across all device.

However, the Philippines lags behind other SEA nations when it comes to average fixed connection speeds. While Singapore is at the top 200.12 Mbps, Philippines was just at 25.55 Mbps, as per Speedtest Global Index. However, India is still comfortably ahead of the Philippines, which scored 41.48 Mbps.

One of the most compelling benefits of the country over any other Asian country is its high-quality talent. With higher education a big priority among masses, the literacy rate in the country is 98%. The country is the world’s third-largest English-speaking nation with 64% of the total English speakers. About 350,000 students enrich the professional pool each year.

In terms of making it easier for startups to emerge in the Philippines, the government has made some commendable reforms with new laws such as the Standard Deadline for Government Transactions, One Unified Business Application Form and a single-window system for permits and licensing.

Finally, sitting in the 12th position in the ease of doing business index by World Bank, Malaysia is fighting hard to climb up the charts in Southeast Asia.

The World Bank puts Malaysia in the category of high-income economies where digital adoption levels are high; higher than approximately a third of OECD [Organisation for Economic Cooperation and Development] countries.

The continued growth of Malaysia’s digital economy over the past few years, combined with the increase in internet penetration, is a strong indicator that Malaysia can become a preferred choice for Indian startups.

Due to increase in smartphone subscriptions and rise in data consumption led by 4G subscribers, Malaysia mobile data traffic is projected to grow at a compound annual growth rate (CAGR) of 10.18% from 4.6 Mn terabyte (TB) in 2019 to 7.5 Mn TB by the end of 2024 as forecasted by GlobalData, a leading data and analytics company. This bodes well for internet products and services that rely on high consumption such as content and media and entertainment startups.

But India still holds the key when it comes to hiring less expensive talent and of course in terms of the growth ceiling thanks to the much higher population index as well as the opportunity for growth in terms of internet penetration. But Southeast Asia seems tailor-made for Indian startups that have hit the temporary ceiling in terms of growth in India’s urban markets. As the Indian market opens up and matures, Southeast Asia is best poised to be the focal point for expansion efforts by successful Indian startups.