Towering Valuations But No Sign Of Profits: The Story Of Indian Unicorns In 2020

The combined valuation of 35 Indian unicorns stands at $116 Bn, but majority of them have negative unit economics

On average, it takes seven years for an Indian startup to achieve $1 Bn-plus valuation from the time of inception

Is it time to reframe the definition of unicorns from a financial sustainability point of view?

Perhaps nothing indicates the success of India’s startup ecosystem more than the rising number of unicorns in the past couple of years. While India is still way behind China and the US in terms of companies with $1 Bn-plus valuation, the country has outpaced other developing economies such as Germany, UK, South Korea, and Japan in this regard.

The success of a startup ecosystem is typically measured through the annual growth key macro indicators such as the total capital inflow, the number of startups funded, deal flow, investor participation. But recently, another metric has come into the public debate i.e the count of unicorn startups with $1 Bn-plus valuations. The rise of unicorns is a testament of a startup’s ecosystem ability and propensity to sustain a high growth streak of startups.

On the third spot is India which has over 55K startups out of which 35 managed to enter the unicorn club (few dropped out as well). India has outpaced more developed economies and emerging startup ecosystems such as the UK (25), Germany (13), and South Korea (10).

In the post pandemic era, higher valuations are no longer an indication of the success of a startup, especially a unicorn. When looking beyond the glorified valuations of the majority of unicorns in India and at their bare financial metrics, a very different picture emerges. As per an Inc42 Plus analysis, based on a sample set of 30 out of the 35 unicorns, a mere 30% or nine unicorns are EBITDA-positive i.e with profitable unit economics.

The fact that unicorn startups are some of the biggest employers in the Indian market, a fall from grace or drop in valuation and business downturn can be very catastrophic — not just in terms of squandered VC money but also in job losses, as has been evident during the Covid-19 pandemic.

The State Of Unicorns: India Vs The World

The journey of the Indian startup ecosystem from a nascent stage to the current maturity phase is applaudable. Over the period of 6.5 years (2014 to H1 2020), the total capital inflow in Indian startups stood at $63 Bn across 5,400 deals recorded by Inc42 Plus. These deals have 4,640 active investors in the ecosystem. 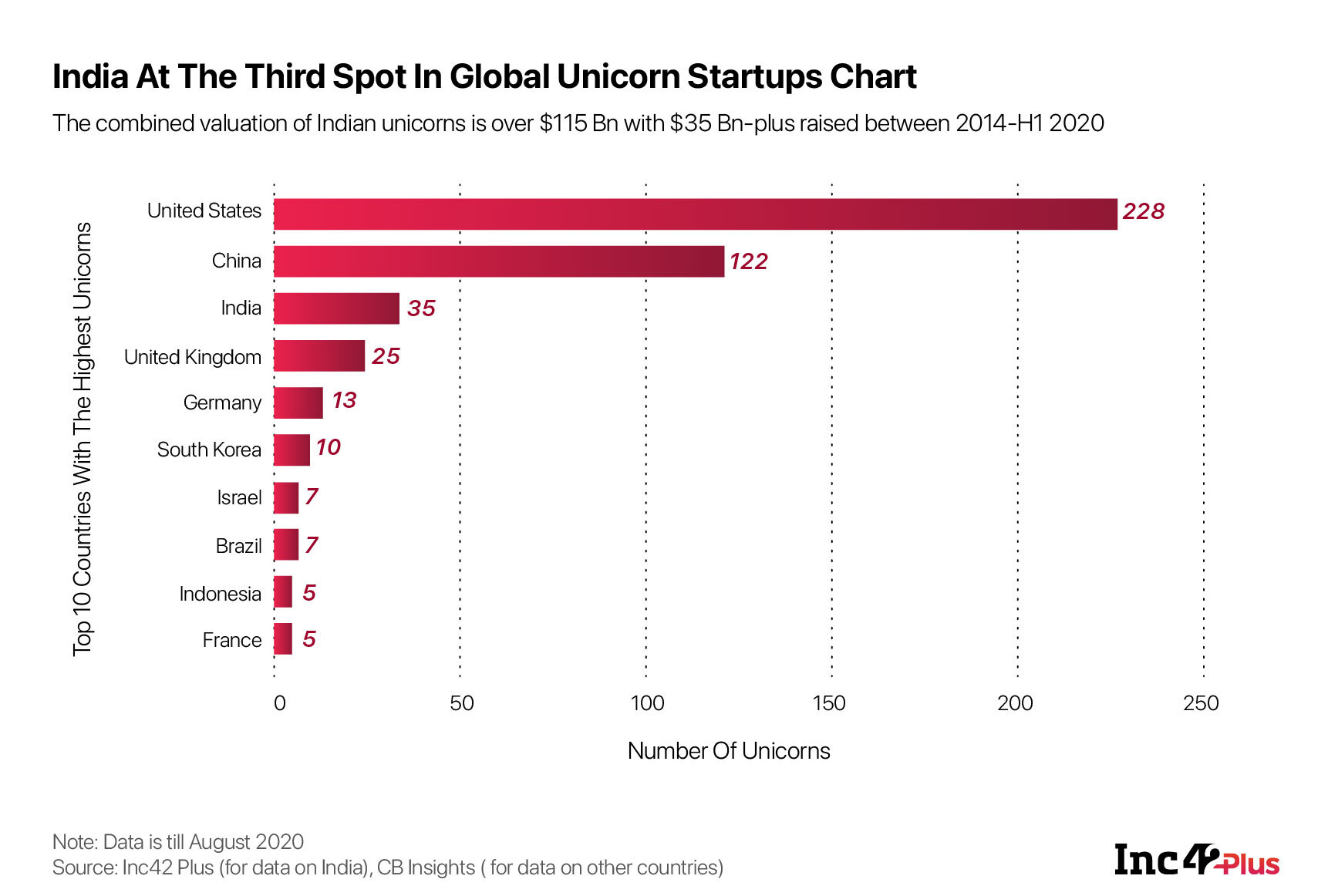 On the unicorn ranking India is at the third spot on a global scale. Above developed economies such as the UK, Germany and France. Another interesting fact is that among the top five countries with the highest number of Unicorns in the world China and India are the only developing countries. 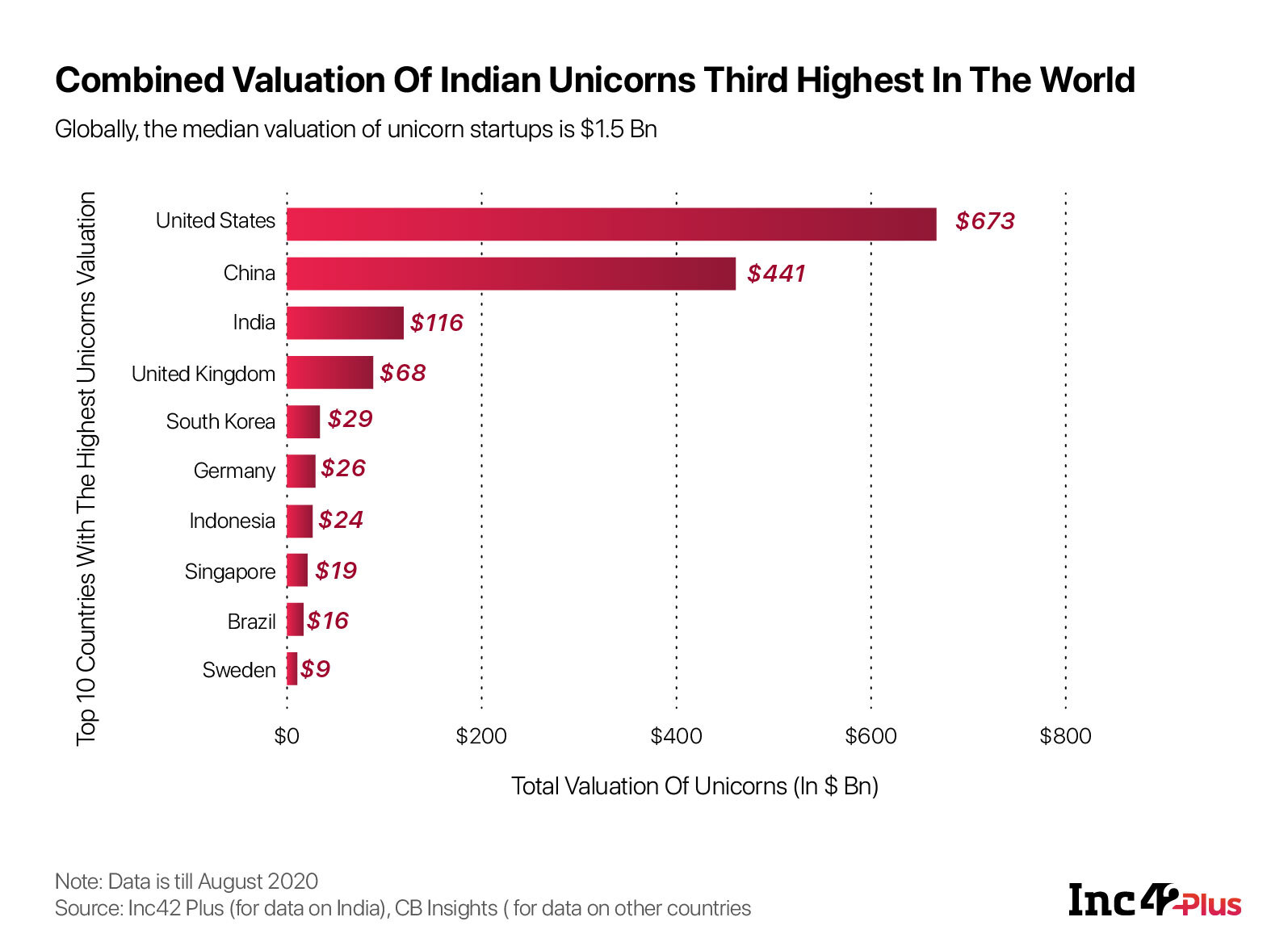 Decoding The Financials Of Indian Unicorns

With $116 Bn in total valuation and over $35.7 Bn in total funding, Indian unicorns are also the largest job creators and employers in the Indian startup ecosystem. This makes it more vital than ever to examine the evaluation criteria for unicorns and shift the perspective from valuations and scale of operations to more unclad financial metrics such as EBITDA and unit economics.

With hundreds of thousands of jobs on the line at unicorns and value creation worth billions of dollars, the financial security of these ecosystem stalwarts has never been as critical to the economy as a whole than now. 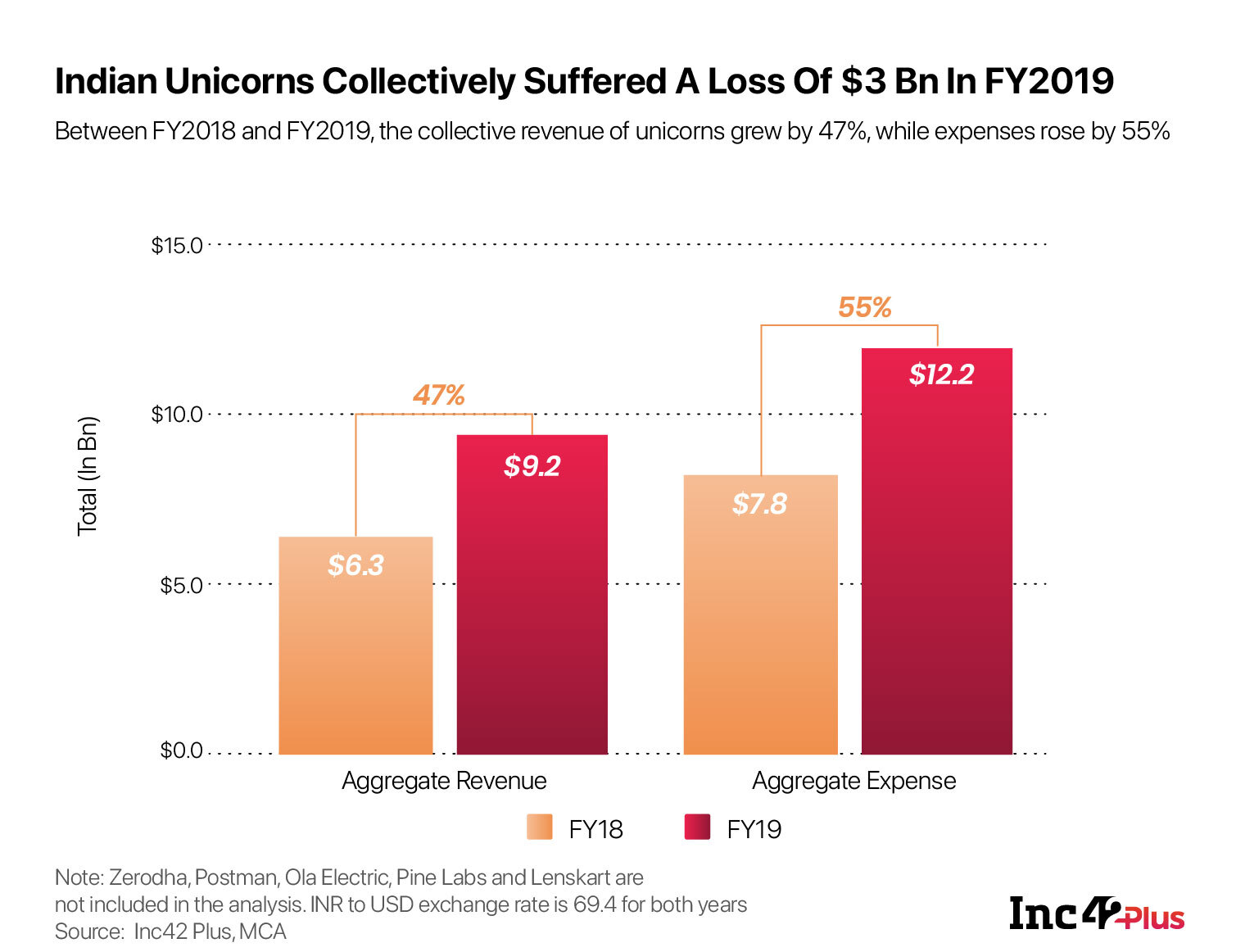 As per our analysis, today, it takes a startup an average of seven years to achieve unicorn status from the time of inception.

This gestation period is getting smaller with the passing of time — the newer unicorns on our list have reached there faster — but the bigger question remains, does this equate to sustainable financial performance? 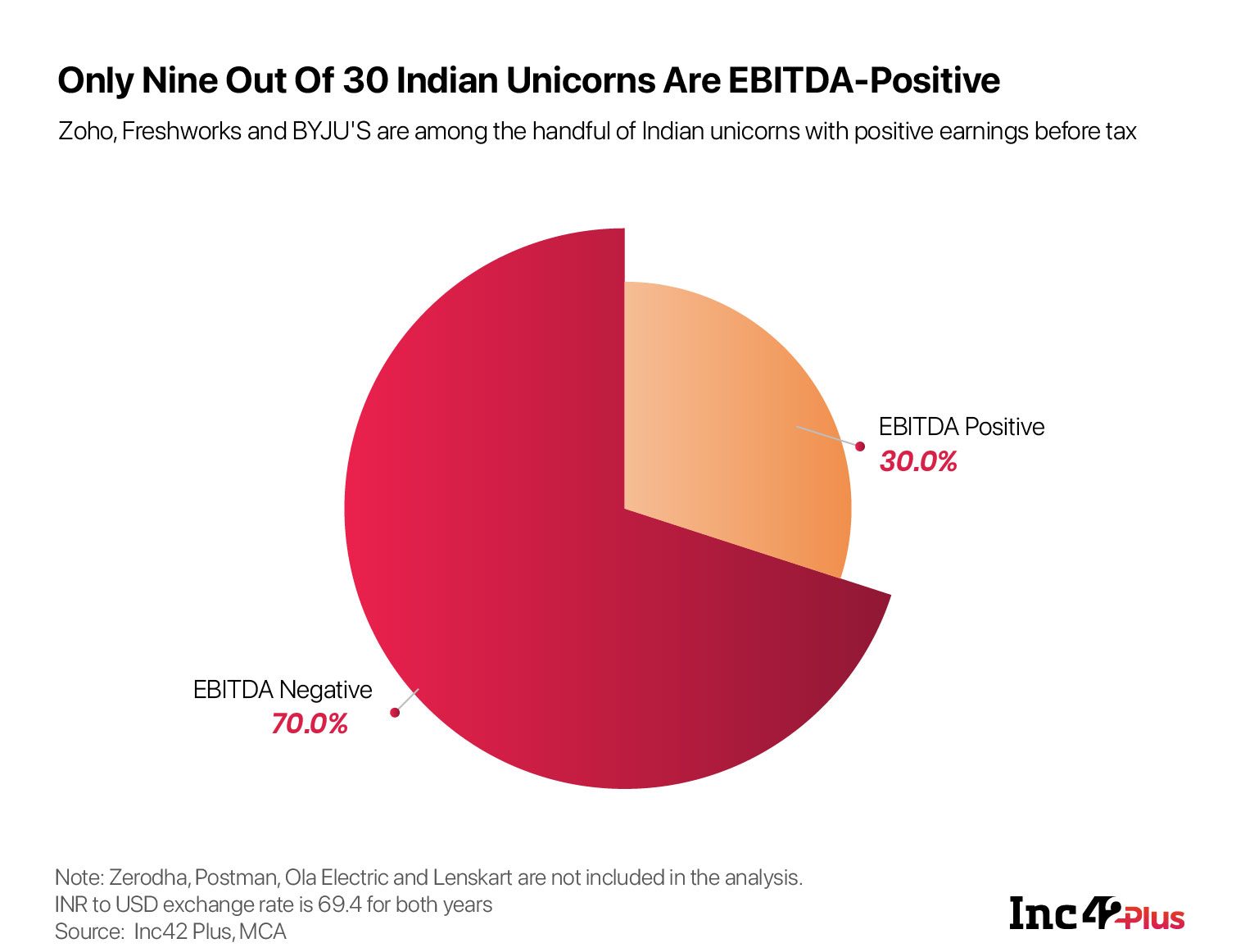 As per the Inc42 Plus analysis of a sample set of 30 Indian unicorns, approximately 70% of the unicorns in India have negative EBITDA which means they are losing money on a unit economic basis. Given the economic crisis globally, survival and scale for startups without the prolonged inflow of venture capital investments is out of the question.

As stated earlier, in addition to the venture capital at risk of being diluted at these unicorns, a financial collapse would be catastrophic for the surmounting unemployment rate in India. It will not only push back innovation but also wreak havoc in the economy.