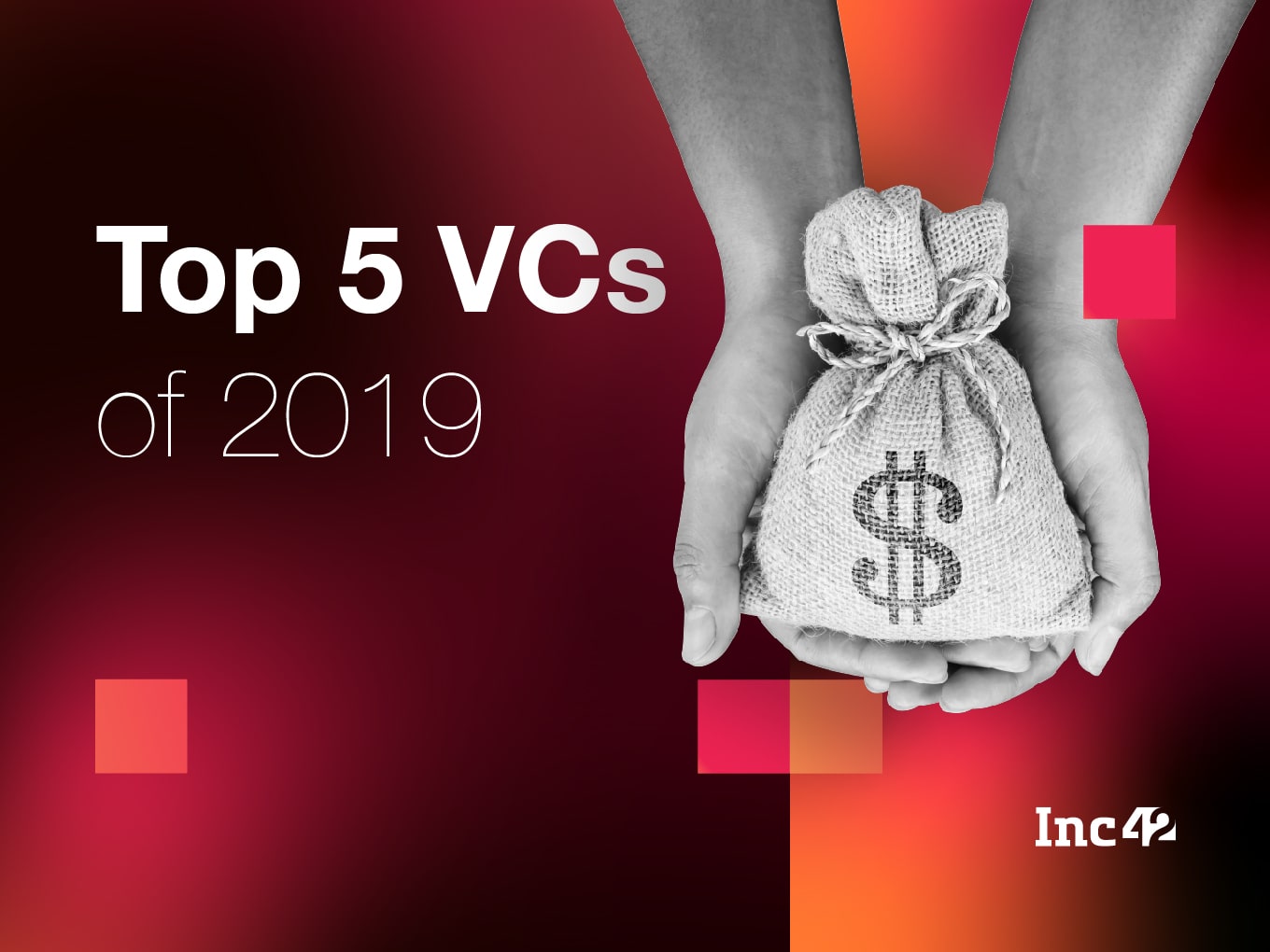 The most active VC in 2018, Accel Partners was overtaken by Sequoia in 2019

Blume Ventures, Matrix Partners and Tiger Global were in the top 5 VCs in 2019

This article is an overview of DataLabs by Inc42’s upcoming Annual Indian Tech Startup Funding Report, 2019 which offers detailed analysis of the investment trends, mergers & acquisitions (M&As), startup policies and macroeconomic factors that influenced the Indian startup ecosystem from 2014-2019. Read all articles in this series.

With the second decade of the millennium coming to an end, the journey of Indian startup ecosystem has entered a new phase. From a handful of investors and a few startups to over 49K startups and over 2,000 Indian and international investors, the startup ecosystem has come a long way in the past five years. International investors now routinely come to Indian shores to invest in the burgeoning tech ecosystem.

While angels and corporations undoubtedly have played a big role in funding trends in 2019, according to DataLabs by Inc42 analysis, 2019 was not one of the better years for venture capitalists. Overall, with over 2 deals per investor on average in 2019 as against 1.6 in 2018 the number of investors in the market fell. While last year saw a drop in the number of unique investors even as the number of unique startup funding deals fell, this year too there was a 10% decrease in unique investor count.

When it comes to VCs, the investments have been largely in the late and growth-stage startups as is expected. Seven startups reached the unicorn status with major funding from VCs. As we mark the end of yet another successful year, DataLabs by Inc42 in its Annual Tech Startup Funding Report noted that in 2019, Indian startups raised $12.7 Bn — 15% higher than 2018 — across 766 deals.

Even though it is a yearly fall in terms of deals, the value has grown. On a positive note, with an average of $21 Mn, the ticket size value of funding increased by 15% in 2019. Considering these this funding scenario made it to the top five venture capitalists in 2019.

Dethroning Accel Partners as the most active VC in India, in 2019 Sequoia Capital cemented its place at the top with over 2x the deals from 2018.

The DataLabs By Inc42 Annual Indian Tech Startup Funding Report, 2019 shows that the venture capital firm participated in 53 deals in 2019 and funded 45 startups.

This is in comparison to 24 deals Sequoia Capital participated in in 2018. The over 2X growth in investments can be attributed to the launch of Sequoia Surge, the VC’s early-stage accelerator and incubation programme. Surge has committed to back 10–20 early-stage startups twice a year and invest around $1.5 Mn in each of them.

Being the frontrunner in 2018, Accel Partners reached second spot in terms of most active VCs in India for 2019. The firm had a proud moment in 2018 with one of its portfolio companies, Freshworks, getting tagged as a unicorn. Further, with 28 deals in 2018, the firm amped up its investments in 2019.

DataLabs by Inc42 noted that in 2019, Accel Partners participated in 38 deals making investments in 36 startups. In early December 2019, Accel announced the final close of its $550 Mn fund, saying it would exclusively focus on seed and early-stage Indian startups. This is Accel’s sixth India-focussed fund.

Some of its successful investments in 2019 include fitness chain Curefit, furniture rental startup CasaOne among others.

After a few dry years in Indian startup ecosystem, Tiger Global was back in its full form in 2019. The pitch for the same began in 2018 and it was expected to invest via its Tiger Global Private Investment Partners XI, $3.75 Bn fund.

The company has led funding rounds in credit card rewards app Cred, neo-banking platform Open and wealth management and investment platform INDwealth. Besides the fintech sector, it has also made investments in hyperlocal services platform UrbanClap and Ola Electric, which has hit unicorn valuation in less than six months.

In 2019, early stage venture capital firm Matrix Partners closed its third fund of over $300 Mn, eight years after it raised its second fund. DataLabs By Inc42 has noted that Matrix participated in 20 deals investing in 19 startups for 2019.

“This is an exciting time to be an entrepreneur in India – mobile internet led leapfrogging is underway across sectors and increasing GDP per capita and consumerism will have a multiplier effect on scaling businesses,” said Avnish Bajaj, founder and MD at Matrix Partners, at the time of the fund raise.

DataLabs By Inc42 has noted that Blume Ventures participated in 20 deals investing in 20 startups for 2019.

Blume is one of the most active VC funds in India already and has more than 75 companies in its portfolio. Blume Ventures was looking to invest about 60-65% of its new Fund III in sectors such as healthcare, financial services, travel, ecommerce, edtech and digital media and entertainment.

Along the lines, its investments in 2019 included HRtech startup TapChief, fashion startup Stage3 along with the Mumbai-based healthcare aggregator HealthAssure.

Some of the other major investors of 2019 include BEENEXT with 17 deals, Omidyar Network with 16 deals with Nexus Venture Partners and 3One4 Capital. One of India’s leading debt investors Trifecta Capital rounded off the top ten.