Even in the initial days of the Covid-19 pandemic, one thing was clear — the situation will change businesses everywhere as the world adopts work from home policy enmasse. With remote workplaces coming to the fore, the focus also arrived on the major collaboration, meeting, team management and productivity mapping tools that can help businesses take control of the new reality. But few gained as much prominence as video conferencing apps such as Zoom, Google Meet, Microsoft Teams, BlueJeans and a slew of other new offerings including the likes of AirMeet, JioMeet and others.

Everyone from small businesses to startups to large corporations turned their focus to video conferencing, and many of them even started paying for video conferencing apps to increase reliance and efficiency. To promote homegrown applications, the ministry of electronics has declared to provide INR 1 Cr for the first year and additional support of INR 10 Lakh for the next three years towards operational and maintenance cost for developing desi video conferencing application.

Reliance Jio launching video conferencing app JioMeet to compete against popular video conferencing apps like Zoom, Skype, Microsoft Teams, Google Hangouts, Google Duo, Houseparty, Cisco WebEx and Signal brought the focus directly on Indian competition to such players. Similarly, Mumbai-based Say Namaste built a desi version of Zoom but it is trying to increase participant support from 25 to 100 for each call. Some other startups like Airmeet, EnableX, Troop Messenger and VacYaChat are trying to use this buzz and increase their user base, especially in India.

Not just around the world, Zoom downloads skyrocketed during the pandemic-induced lockdown and witnessed a six-fold growth to reach nearly 6 Mn downloads in India in Q1 2020. Businesses were forced to download Zoom and other video conferencing apps to continue daily operations. Moreover, school and colleges also moved to Zoom for virtual lectures and classes.

As per the latest data from Sensor Tower, Zoom is leading on both Google Play Store and Apple’s App Store due to it being a largely free service, user-friendliness and improved app performance. However, it did suffer from the huge barrage of new users unravelling some security issues. The company claims to have doubled down its efforts to improve data security and prevent abuses, but instances of security breaches continue to be reported. This is expected with the user base growing immensely in a matter of months. In mid-April, the government of India declared that Zoom is not safe for video conferencing and also issued an advisory for using Zoom. This prompted a race among businesses in exploring alternatives, while newer players emerged in the Indian market too.

As per our latest study in association with market research firm Clootrack, encrypted communication app Signal is considered more secure than its peers such as Google Hangouts, Skype and Zoom. Although, Skype is the most preferred app for video calling.

Zoom acquired Keybase on May 7 2020 to improve its end-to-end encryption and is planning to reveal the first draft of the cryptography it uses soon in a bid to be more transparent on security issues.

The rising security issues over Zoom will open the door for Indian startup players. Startups were already present in the video conferencing ecosystem but there was no such demand for video conferencing apps in the past at least from domestic players and SMBs.

This pandemic will give startups a momentum on the scalability of the business, according to Sudhir Naidu, founder of Troop Messenger. “In personal/consumer space, there are already many apps in the market, which provide features that a consumer would look for.  And for businesses, the pricing needs to be very competitive and its value proposition is all that matters. Pandemic hasn’t created these markets. Pandemic just gave these collaboration apps a much-needed spike. It made many enterprises realise how valuable these tools can be and how these tools are carving out a new work culture.” While security is a key consideration, one of the USPs that can set Indian apps apart from their international counterparts is user-friendliness and UI/UX refinements to match the needs of the Indian customer.

Clootracks and DataLabs analysis can conclude that the most important factor for Indian consumers in choosing video conferencing apps is user-friendliness. Indian businesses are less likely to keep their software and tech platforms updated, which can be seen in the rising number of cybersecurity and data theft incidents in India. India is a very price-sensitive country and always looks for free products, whereas good security is a major cost component in the development of video conferencing apps, so secure apps are less likely to be free.

With SMBs forced to go digital in the pandemic, the prospects of video conferencing apps gaining revenue from the Indian market has grown immensely in the past couple of months.

This change in behaviour will allow app developers to invest more on security and thereby flesh out their products. Even then Indian startups will be playing catch up with video conferencing market leaders, so there needs to be greater localisation and an increased focus on security.

Chandra S. Potineni, founder of Hyderabad-based video conferencing app VacYa told Inc42, “The fundamental question is how is it free? In economics, we’re told, ‘There is no free lunch’. So, any service that is free still costs money to build and operate, and without incoming revenue for a provider, how are they offering the free subscription? There has to be either a business plan to make money tomorrow for investors to be funding the free subscriptions until then or the provider is making money directly from the user (their data or some other aspect).” The growing acceptance for video conferencing will also open up the market for enterprise applications such as Singapore-based EnableX that help optimise the quality of video calls or enable calls on third-party platforms for SMBs and enterprises.

Founder Pankaj Gupta said, “Everybody has realised that remote working and remote learning is here to stay and tools that facilitate this will continue to grow. We are already hearing large companies talking about having up to 25% workforces working remotely going forward. So video conferencing, webinars and other forms of remote communication will continue to grow. We will also see a lot more use of such tools in other industries including education, healthcare and financial services” 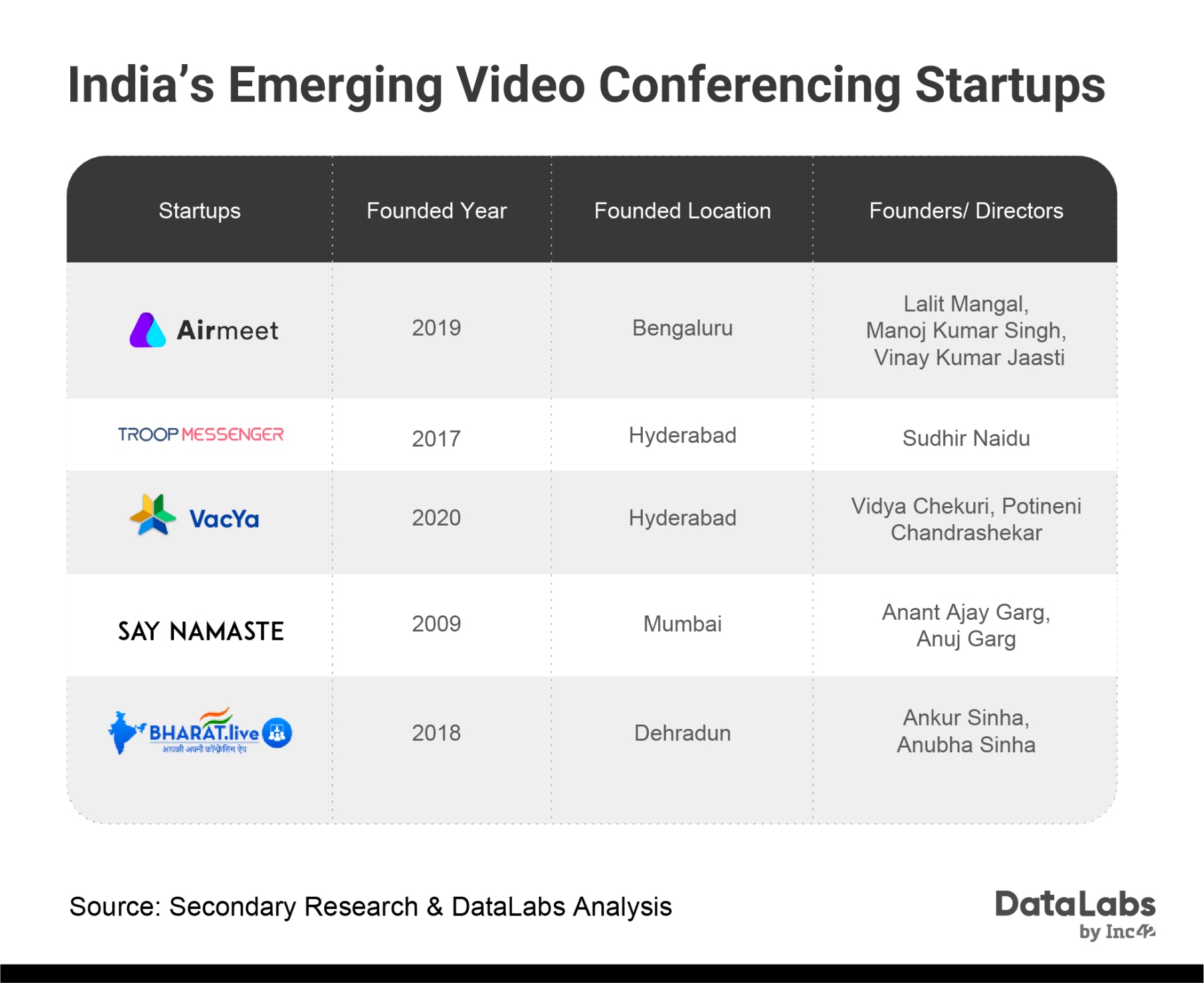 As per DataLabs analysis, the video conferencing market in India reached a market size of nearly $400 Mn in 2019, accounting for 6.6% market share of the total global video conferencing market of $6.1 Bn. Most video conferencing startups in India began their operations after 2018, so the segment is still at a very nascent stage in India. However, India’s SaaS startups are growing in a pedigree, which is likely to lift the various players as well. Video conferencing apps can attract bigger investments by proving the use-cases among SMBs that primarily use regional Indian languages for communication, as well as user-friendliness and non-complex security measures.

The Indian market hasn’t witnessed more effort into video conferencing apps by Indian startups. With the digitalisation of every industry, companies may continue with work from home permanently. India’s largest IT company, TCS is planning to transform 75% workforce to work from home permanently by 2025. This will be building momentum for video conferencing startups to grow in Indian and international market.

These will be key for adoption of homegrown video conferencing apps among the Indian SMB and MSME base. Distribution is another key competitive edge that Indian apps can gain through partnerships with app integrators, improved support from telecom service providers and OS providers.