The Bold And The Beautiful: 5 Things To Know About The Disruptive Yet Challenging On-Demand Beauty Segment

According to a KPMG report, the beauty and wellness industry in India will be $13 Bn by 2017 and in the MENA region it was $25.5 Bn in 2014 as per the global market intelligence firm Euromonitor International. According to some industry estimates, in a large economy like India, the market size for beauty services is pegged to be around $4.8 Bn and it is increasing rapidly.

So as the beauty business booms, the hitherto unorganised on-demand sector is slowly organising itself and getting popular with Millennials. And why? The following factors are at play-

No wonder, on-demand beauty startups are mushrooming by the day, hoping to leverage the phenomenon of the ‘Uberisation’ of beauty services as well. 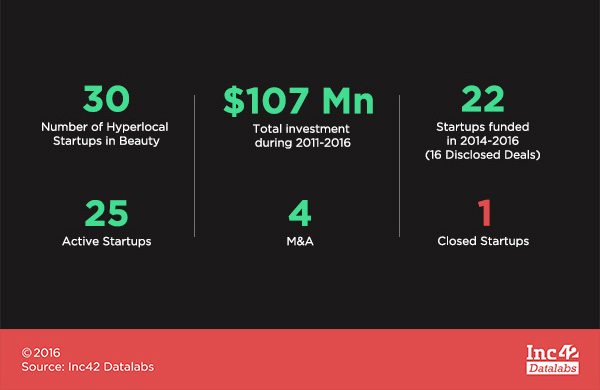 Out of the 30 startups, 25 are still active, with four startups following the M&A route (which include Near.in, Salosa, FindYahan, and Zapluk) for an exit while one shutdown (Bulbul). The most recent one was the acquisition of India Quotient-backed Belita, Mumbai based on-demand beauty service last month, by Enrich Salon, a for an undisclosed amount. 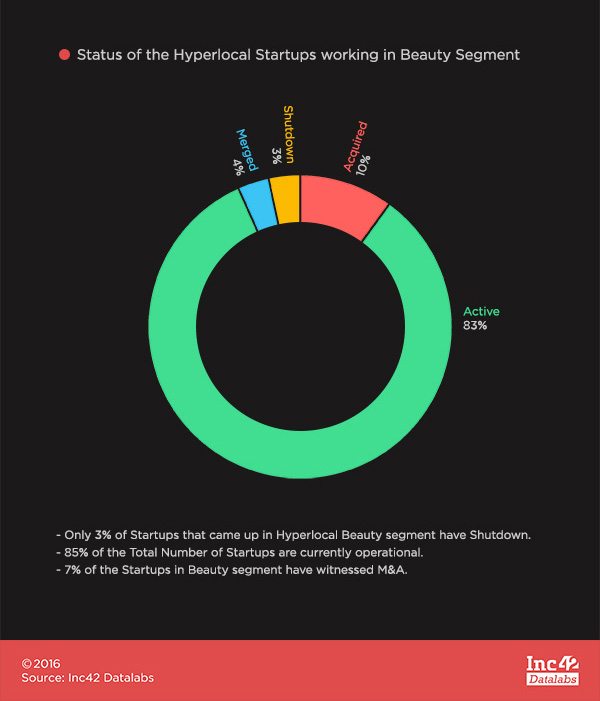 When one looks at the entire gamut of startups providing beauty services, about 44% of the startups are standalone players such as MyGlamm, BigStylist, GetLook, etc. The other 56% consists of home services and local services providers which are also providing on-demand beauty services such as Zimmber, UrbanClap, Housejoy etc. Looking closely at home services and stand alone players, it comes to light that beauty services comprise a major share of 16% of the services offered by them – with 10% of beauty service provided by players in hyperlocal (local service, home service) and 6% by stand-alone providers. 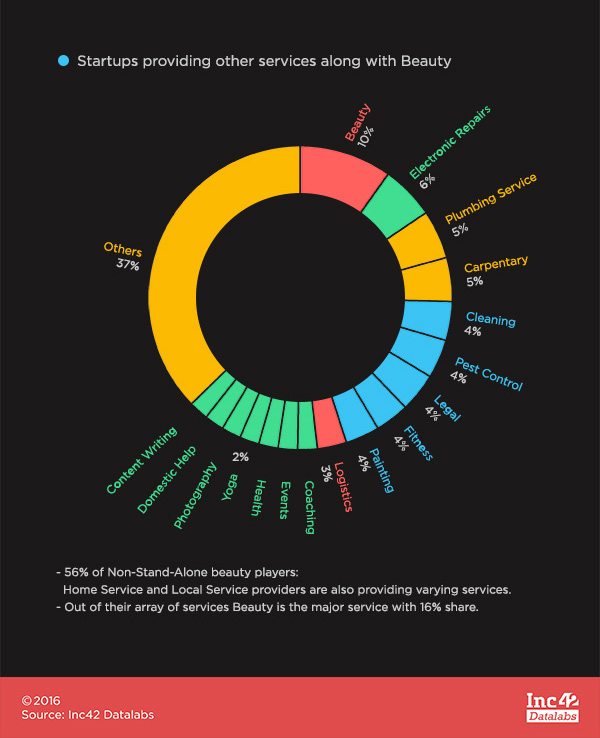 Meanwhile, new entrants continue to make their way in the market. Case in point – Quikr’s on-demand beauty service ‘AtHomeDiva’ which was launched in July, following its recent acquisition of in-home beauty service provider, Salosa in May.

Beauty startups seem to follow two major monetisation models. One is the commission basis where commissions are charged on the booking value or the so-called aggregator model while the other is the full stack model where startups have associated beauticians on their payroll. So while Belita, Housejoy, and Vyomo had beauticians on their payroll, MyGlamm, Zimmber, UrbanClap, and VanityCube among others charged a commission on the booking amount.

We spoke to 11 startups in this space and discerned that commissions could range anywhere from 10%-30%. So while GetLook and UrbanClap’s commissions ranged from 15%-20%, VanityCube’s fell between 10%-30% while Zimmber’s commission varies from city to city. (Update-Zapluk which earlier had a hybrid model has now shifted to a full employee one.)

Amongst the 11 startups we talked to, the average number of daily orders ranged from 75 to 1,000. So while Zapluk’s daily order stood at 75, that of UrbanClap averaged at 316 while Vyomo claimed to receive 1000 daily orders. When it came to the number of personnel/ beauticians associated with the aforementioned startups, the number ranged from less than 100 to more than 7000. 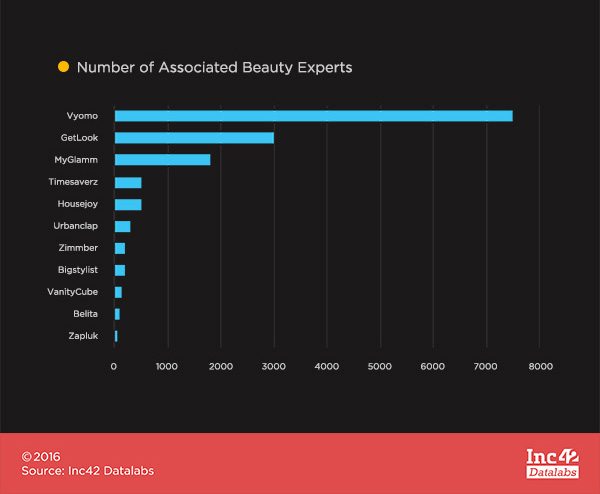 The Challenges In Providing Beauty On-Demand

Like all other on-demand services, beauty also has many challenges with the most prominent being that of delivering a uniform service experience every time.

So delivering consistent service quality remains the top most concern for startups. Followed by that, is the challenge of sourcing the qualified pool of beauticians to deliver the experience. Training them remains an added challenge.

Saran Chatterjee, CEO of Housejoy adds, “There is always the challenge of availability and reliability of service providers and the quality of work they provide. Firstly, you don’t find them when you need them. Secondly, you cannot be entirely sure whether they will show up or not at all and lastly, the quality of their service may be subpar.” 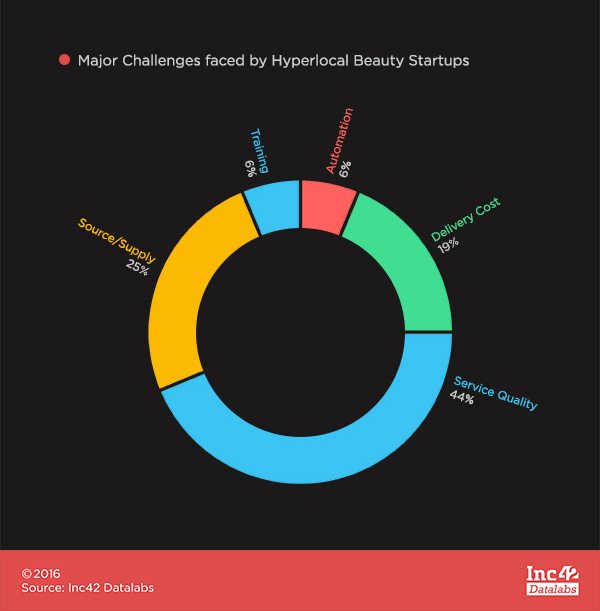 Delivery costs remain another challenge. As articulated by Renu Bisht, founder VanityCube, “Working in a salon is a taboo and that to going to someone home to deliver the same service was even more challenging. India comes with tough weather as well, sometimes it’s extremely hot, cold or rainy and beauticians usually travel by two-wheelers or by local transportation making it tough for them to commute.”

Also, customisation on the basis of client’s needs is a challenge too as providers are dependent on inputs received over a phone call, says Debadutta Upadhyaya, co-Founder Timesaverz.

Another challenge stems from the fact that the customer experience cannot be automated completely because the services delivered involve a human factor. Says Manan Maheshwari, co-founder Zapluk –

Quality is essential for survival in this market and the cost associated with delivering a bad service experience is huge. 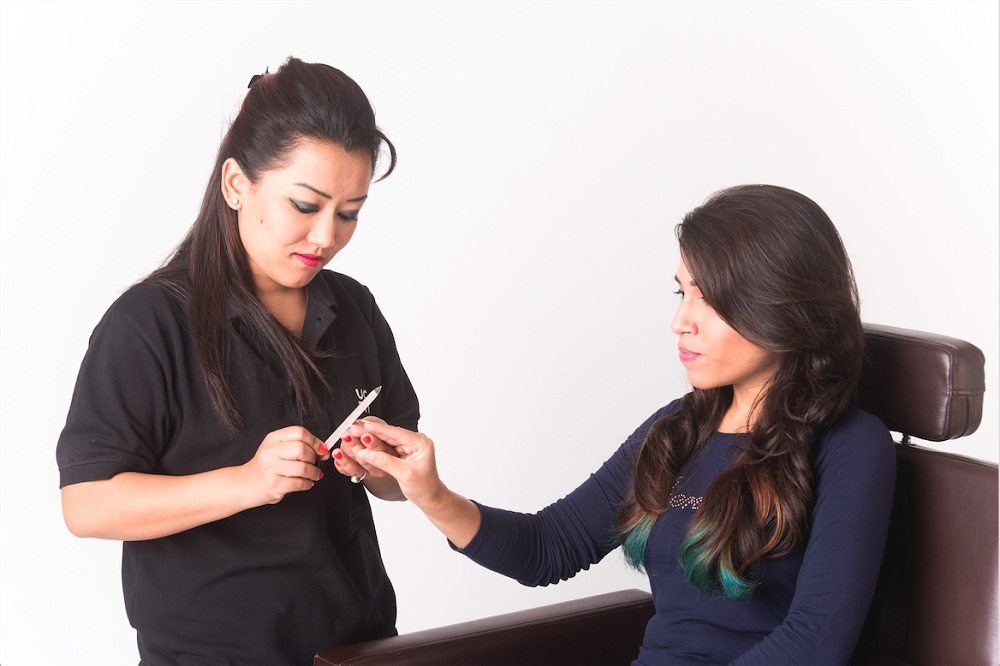 Security remains another concern according to Prateek Agarwal of Stylofie. Adds Prateek, “Trust factor plays a huge role as it is lesser when someone new comes to provide service in your own home as compared to you going to your trusted saloons.”

Consequently, startups are focussing on standardising the service delivery experience by providing training to professionals, making sure that customers can choose the same beautician every time they book, and developing a standard set of operating procedures. 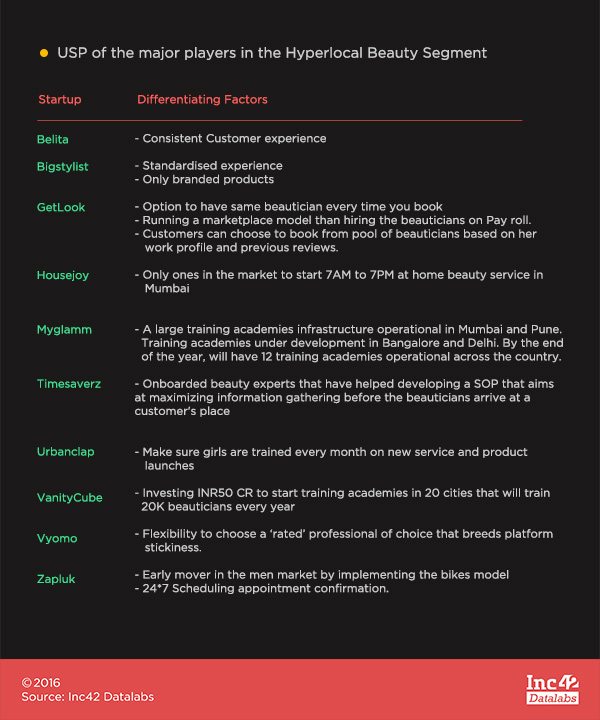 MyGlamm, for instance, has plans to make operational 12 training academies across the country by the end of this year. Similarly, Housejoy has started providing services right from 7am to 7pm in Mumbai while Zapluk claims to have a 24×7 scheduling system in place.

Anubhab Goel, CEO of Zimmber says, “In on-demand beauty service, the real challenge is to train and uplift beauticians to deliver a much better experience. The business model has its own dynamics and challenges which one will learn during the journey. Overall, no easy success in this industry now. So for the upliftment and training, we do a three days communication skills and behavioural training of beautician. Also to retain the beauticians we do many engagement programmes for them.”

He adds that Zimmber’s differentiation lies in the fact that is not a booking platform. What it tries to ensure is that users get the service from the right person at the right time who will do the right thing at the right price.

While the quarterly funding trends observed a definite drop in Total Deal Value between Q4 2015 –Q1 2016, once we exclude the Series B big tickets of UrbanClap and Housejoy, the funding poured into the sector seems to be growing. The outlier rounds were that of UrbanClap’s $25 Mn Series B and similarly Housejoy’s $22.5 Mn series B. Gurgaon-based UrbanClap’s round happened in November 2015, led by Bessemer Venture Partners and existing investors Accel and SAIF Partners while Bengaluru-based Housejoy’s funding round was led by ecommerce major Amazon in December 2015.

So excluding these two outlier rounds, Total Deal Value between Q4 2015 –Q1 2016 has shown an upward trend. Prominent rounds that have happened in this year till now include:

Interestingly, all these startups are standalone beauty startups, which may point to a  trend of investors inclining more towards niche players in this segment this year.

Similarly, the Half Yearly trend also clearly shows a definite rise in funding (again minus the outliers), although the number of deals are less in 2016. 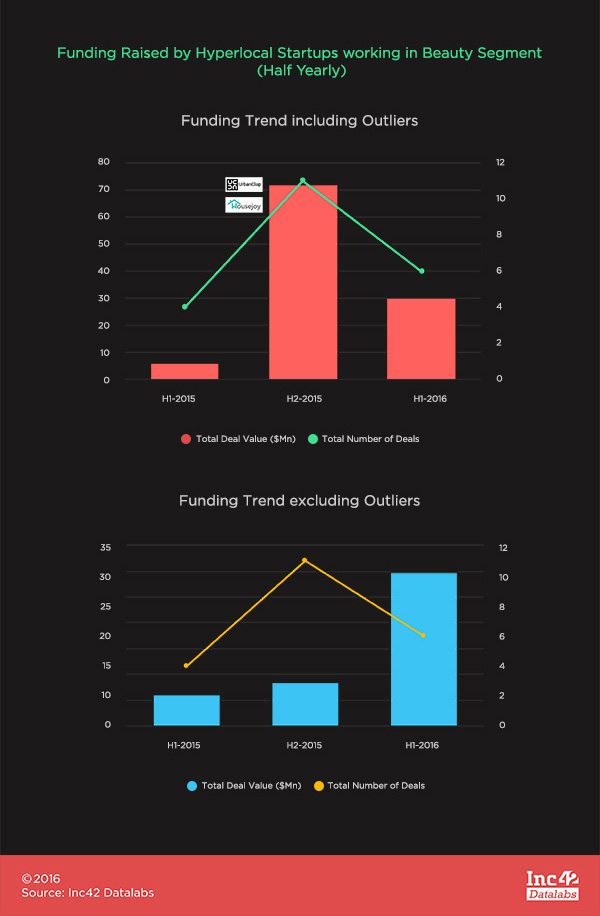 Of the total 30 startups in beauty space, 59% are early stage startups. Surprisingly, 41% of the total number of startups have survived the early stage and been able to raise Series A or Series B funding. The Road Ahead For Hyperlocal Beauty Startups

Scaling remains a primary motive for startup players to arrive at a breakeven stage. Reaching more customers in more cities, introducing premium services to raise ticket sizes, training more beauticians to standardise the delivery experience, and getting more and more beauticians on rolls to cover more territory and thereby boost the average number of daily orders are some of the expansion goals lined up by beauty startups. 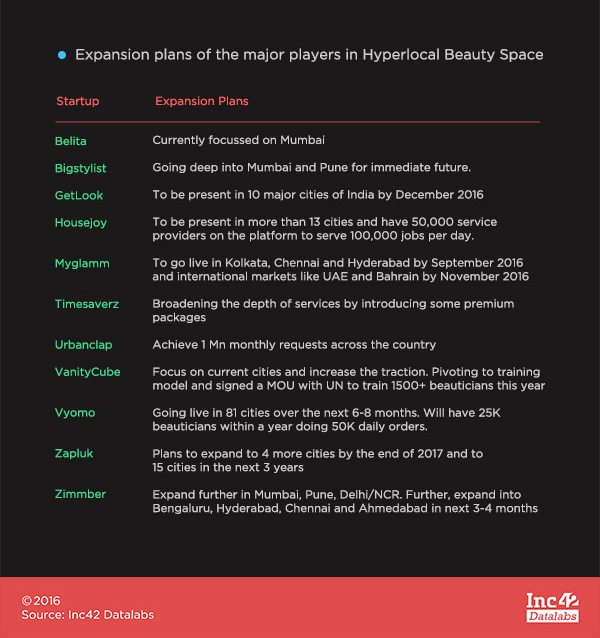 Abhiraj Bhal CEO, UrbanClap says, “Beauty is an integral part of our business which has the potential to generate $500 Mn in revenue for us down the line. The current focus is to aggressively increase service quality levels and push this category to occupy a 20% share of UrbanClap’s total business. With margins between 15 – 25% of the job size, we want to double down our efforts and create an empire out of this vertical.”

Will They, Won’t They?

Beauty startups may be banking on a $5 Bn market opportunity or the fact that and is growing at a rate of 18% CAGR but there are some hard core challenges they need to address before they can think of making it a scalable business.

First and foremost is the unit economics itself. Says Prateek of Stylofie,

Startups haven’t yet figured out the unit economics of the business yet. The cost of servicing the customer is high because it’s an experiential category. And hence the ticket price and commissions earned are not enough for a sustainable model.

Prateek has a point here. Most of the on-demand orders centre on the category of waxing and facials, whose ticket sizes cannot be increased. And as long as ticket sizes can’t be increased, unit economics will remain a challenge. People still prefer to go to salons for haircuts, colouring, spas and other specialised services.

The on demand beauty service offerings are a great solution for regular treatments (threading, pedicure, and the like). But the absence of the premium salon ambience at home prevents these providers from being able to demand a significant premium. The convenience factor could help scale on demand beauty service providers, but profitability is always going to be a pain point.

However Prateek believes that with established saloons entering the on-demand market, things could change. By doing bookings for saloons that have their own professionals on payroll, the trust factor in on-demand is taken care of. Also, with salons taking care of logistics, startups could save on delivery costs too. Almost every salon has their set of loyal clientele, and by collaborating with them for running an on-demand business, startups can leverage that loyalty factor too.

Bharati Jacob, Managing Partner Seedfund, says the challenge for the beauty platforms is to keep the service provider loyal and engaged. Says Bharati, “There have been many companies funded in the on-demand beauty sector and many more are looking for funds. On the demand side, every person would welcome and enjoy the idea of beauty services in the privacy of his/her home. Women tend to favour same person for the services, as in they don’t “flirt” and change the service provider once they are happy. On the supply side, service providers will go to whoever gives them the business. Their earning capacity is a perishable commodity – every hour that they are not serving a client is income lost for that hour.  Hence, from the supply side – how will the platform keep the service provider loyal and engaged? This lacuna is what is creating and will create problems in the business model.”

Ultimately, like other service markets, the challenge lies in organising and standardising the market and hitting the proper unit economics. Consumers have been relying on home beauty services for a long time now. The challenge for startups is to figure out a sustainable model for the same which is scalable and can deliver a predictably good customer experience every time.