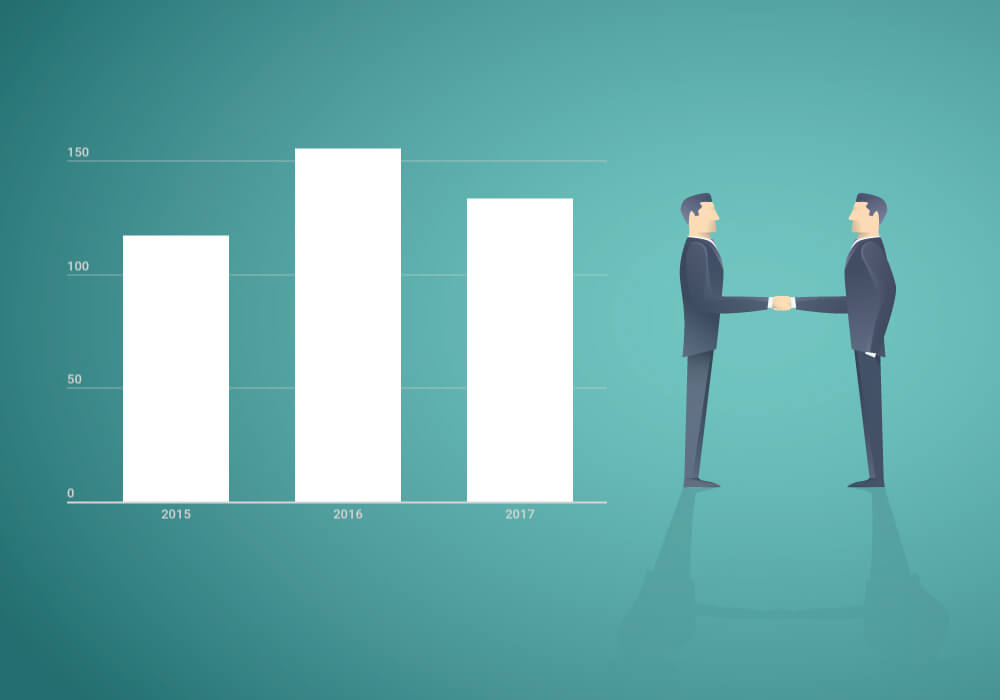 This article is an extract from Inc42’s recently released Annual Indian Tech Startup Funding Report 2017 which provides a meticulously detailed analysis of the funding trends and M&As in the Indian startup ecosystem for the period 2014-2017. To read more of this report, click here.

In 2017, 133 M&As were reported in the Indian Tech startup ecosystem. A further breakdown of the total number of M&As reported last year reveals that out of the total deals – just 3% were mergers, 32% were acqui-hires and the remaining 65% were acquisitions.

The sectorwise breakdown of M&As recorded in 2017 in the Indian tech startup ecosystem reveals that the number of M&A deals were the highest in the hyperlocal sector, the sector reported 23 deals. This was followed by enterprisetech which recorded 13 and then came ecommerce which saw just six M&As.

Google making its first acquisition in India was one of the most interesting things which happened in 2017 in this regard. The tech giant acquired four-month-old, Bengaluru-based startup Hailli Labs.

Over the years, acquisitions and mergers have been seen as an instrument to either expand, gain market leadership, increase product offerings among others. However, since 2015, in the Indian tech startup ecosystem, over-funding at the seed stage and the inability to raise funding or scale any further has led to these startups in being acquired or acqui-hired by a larger company or led to two smaller companies getting merged at the initial stage itself.

Now investors use the startup acquisitions or mergers as the route to either the last resort for startups who get tangled into massive cash burn and have lost their way ahead in the ecosystem or bid to build a larger company.

Since 2015, only a few high profile M&As have taken place in the Indian tech startup ecosystem. Some of these include – Foodpanda India and Ola, Ola and TaxiForSure, Snapdeal and Freecharge, Ibibo and MakeMyTrip, Citrus Pay and PayU India, Flipkart acquiring Jabong and eBay India, Paytm acquiring Nearbuy and Little, etc.

A couple of other interesting developments also took place in this context in India. These include months of negotiations spent on the Snapdeal-Flipkart merger, which disappointingly ended up in nothing. However, the negotiations highlighted the importance of clubbing synergies and making a stronghold on the existing market rather than competing with each other.

Another major development which occurred was Snapdeal selling Freecharge to Axis Bank for just $60 Mn. Snapdeal had spent over $400 Mn-$450 Mn in acquiring it just two years back. This was an epic example of acquisition failure since Snapdeal wasn’t able to work well on the Freecharge dream for which it made the acquisition.

The other one was the development made in the case of OYO and Zo Rooms. The former announced that the acquisition had never taken place which Zo Rooms stated as untrue.

A few more interesting M&As that took place in 2017, including

Acquisition And Merger: Paytm hit the jackpot after it acquired Little and Nearbuy, and subsequently merged the two. “This combination of Nearbuy and Little marks a great opportunity for us to reinforce our commitment to support small and large retailers in the new age of mobile commerce and payments. I am sure consumers will love the greater selection and reach of everyday deals and discount offers,” said Vijay Shekhar Sharma, founder and CEO of Paytm had said it during the deal closure in a statement.

A Startup Buying Into Corporate: Quikr acquired two subsidiaries of HDFC for a deal valued at $5.49 Mn (INR 350 Cr). The subsidiaries were HDFC Realty Ltd which operates the brokerage business and HDFC Developers Ltd that owns the HDFC Red platform for online real estate classifieds.

However, one thing which is still missing in the M&As in India is corporates acquiring startups. Though over the years, corporate investments in startups have grown, the same hasn’t happened at the M&A level. Only a handful of such deals have taken place in the Indian startup ecosystem. Some of these include Freecharge being acquired by Axis Bank, Mahindra acquiring BabyOye (it later sold it to Firstcry), among others.